Lysander Spooner: The Forgotten History of the Man Who Started the First Private Post Office 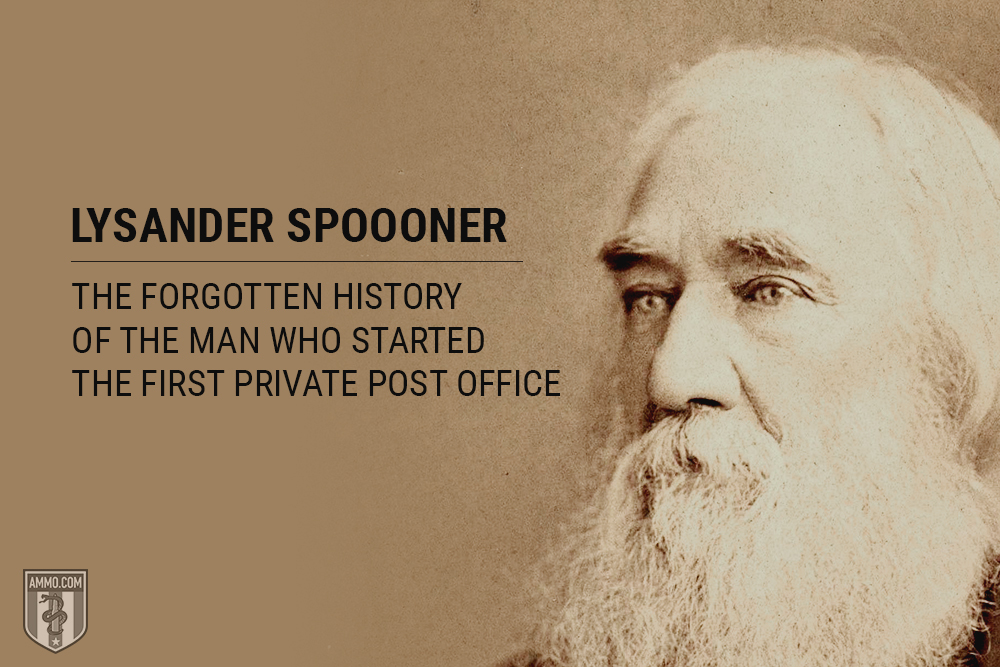 Lysander Spooner is an important – and not exactly obscure – figure in the history of the liberty movement. He’s an idiosyncratic figure from the 19th century with no small cheerleading section in the 21st century. A bit of a throwback to a very different time, Spooner was a champion of the labor movement and was even a member of the First International at a time when socialists and anarchists coexisted peacefully within that movement.

Perhaps one of the most interesting things about Spooner is that he ran a private company in direct competition with the United States Post Office. This endeavor predictably failed not because the American Letter Mail Company couldn’t compete, but because Spooner was hamstrung by lawfare.

Spooner was born in Athol, MA, in 1808, a descendant of Mayflower pilgrims and the second of nine children. His career as a lawyer set the template for the rest of his life’s work: Spooner had studied under a number of prominent lawyers (a practice known as “reading law,” which was much more common at the time). However, he did not have a degree and state law required that he study further under a lawyer. He considered this legal discimination and went ahead and started practicing law anyway.

In 1836, the state legislature got rid of the requirement. Indeed, Spooner was against any legal requirement for licensure of any profession, something that would come up again later on in his battle against the United States Post Office. This was part of Spooner’s belief in a natural law, whereby any act of coercion was ipso facto illegal.

Spooner’s law practice was not a success, nor were his attempts to dabble in the real estate market. He moved back onto his father’s farm in 1840. It was here that he hatched the plan for the American Letter Mail Company.

Throughout the 1840s, the rates of the Post Office were a source of national controversy, with many Americans considering them exorbitantly high. For context, in those days it cost 25 cents to send a letter from Boston to Washington, D.C. That’s about $7.50 in 2020 dollars. Freight, however, was significantly cheaper: a barrel of flour cost about 2/3 what it cost to send that very same letter.

Spooner astutely noticed that while the Constitution provides for a state-run Post Office, it does not prohibit private citizens from running their own independent post office. With Spooner’s independent solution on the market, prices began to drop significantly. Court cases were generally found in Spooner’s favor, with the U.S. Circuit Court agreeing with his argument that the United States government had no right to monopolize the mail system. Congress took action, passing a law in 1851, that made the United States Post Office a legal monopoly.

This spelled the end of Spooner’s company, but he was known thereafter as “the father of the 3-cent stamp.”

Spooner’s Abolitionism and the Civil War

Where Spooner primarily came to public attention was as an abolitionist. In 1845, he published a book called The Unconstitutionality of Slavery, in which he argued that the United States Constitution prohibited slavery. Part of his argument was predicated upon his belief that all unjust laws were unconstitutional and could be struck down by judges. His arguments were cited in the party platform of the Liberty Party and were cited by Fredrick Douglass as changing his mind on the subject.

From the publication of this book up to 1861, Spooner was a tireless campaigner against slavery. He drafted works on jury nullification and other ways for private citizens to fight it. He frequently provided legal counsel for runaway slaves gratis. Pro-slavery Mississippi Senator Albert G. Brown believed that Spooner provided the strongest legal challenge to slavery, of which he was aware.

Spooner also advocated for guerilla warfare and other forms of violence to stop slavery in the United States. However, he also opposed the United States using force to keep the Confederate States in the Union. His view was that the same natural law making it right and just for slaves to revolt against their owners, made it wrong and unjust for the United States to use military force against the South. This made him somewhat unpopular on both sides of the war, as his arguments were at variance with each side’s official narrative.

After the war, he continued to write on the subject of jury nullification. Most of his later work appeared in individualist anarchist Benjamin Tucker’s journal Liberty.

Spooner was an anarchist of a tradition that has largely disappeared from the scene: The individualist anarchist who prizes pre-industrial society and small stakeholders as a counterweight to industrial capitalism, of which Spooner was a sharp critic. He was also opposed to laws against usury, as well as laws preventing the minting of private currency. He championed self-employment and opposed wage labor.

As the libertarian movement began to emerge in the early 20th century, Spooner’s work enjoyed something of a renaissance, being reprinted in the popular journals of the day such as Rampart Journal and Left and Right: A Journal of Libertarian Thought. Murray Rothbard has cited him as an influence, as has Randy Barnett. However, his critique of wage labor and capitalism makes it difficult to place Spooner as an “anarcho-capitalist” in the way that it would be thought of today. Spooner was a champion of the small businessman, the small farmer, and the workers’ cooperative.

Perhaps the mark that Spooner leaves most on the libertarian movement as we know it today is his critique of the Constitution, which he believed does not carry any inherent authority. As such, individuals are not legally or morally obligated to comply with federal authority. Such sentiments are often echoed by sovereign citizens, tax resistors, and other members of the liberty movement.

Spooner is worth a read, not just because his ideas are still relevant today (which they are) but also because he exists in such an unusual and untread space in the history of American liberty. You might not agree with everything that he has to say, but you’ll certainly have a hard time arguing against it.