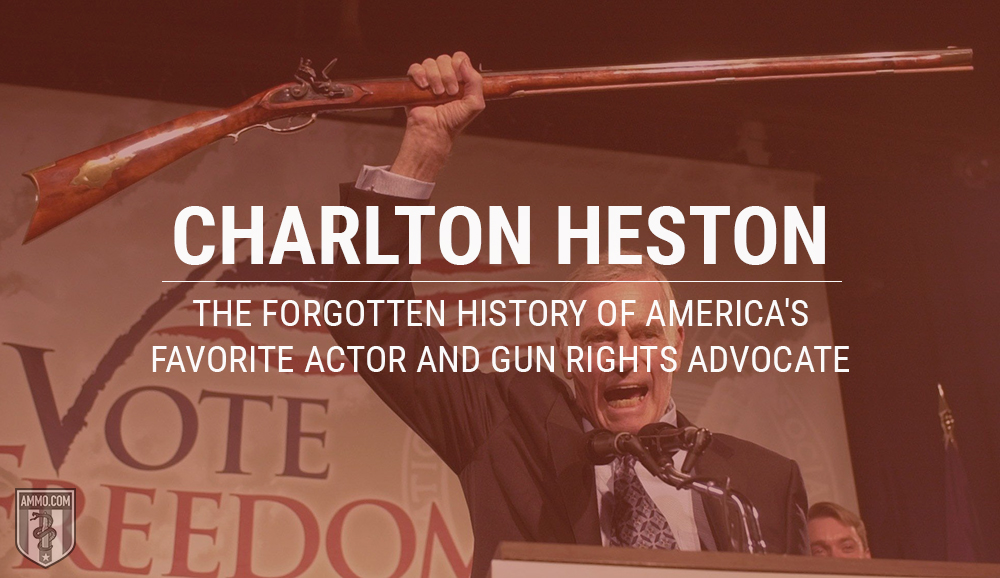 Charlton Heston is a singular figure in American history and consciousness. During the early period of his acting career, he was known for historical and Biblical epics. After his career waned throughout the 1960s, he was reborn as a science fiction actor, thanks to his starring role in Planet of the Apes. While often viewed as a bit of camp today, this film and the series that spawned it was the biggest popular science fiction movie franchise in the pre-Star Wars era.

For our purposes, however, Charlton Heston is an unsung hero because he was a champion of limited government, especially as it pertains to Second Amendment rights. He served as president of the National Rifle Association for five terms, only retiring when he was diagnosed with Alzheimer’s disease in 2002. Starting his involvement in politics in the Civil Rights era, he later gravitated toward conservatism, organizing a political action committee to support Ronald Reagan.

From the Air Force to Film

Heston was the son of a sawmill operator, and grew up in backwoods areas of the Midwest. It was here that he acquired a lifelong love of nature, as well as hunting. His parents divorced when he was 10. His mother remarried, which is where the former John Charles Carter became Charlton Heston.

Acting came naturally to the young Heston, who was a bit of a loner. When tromping around the backcountry of Michigan, he would often act out the characters from books he was reading. When he got to high school, he enrolled in the drama program. He used his budding acting career to win a scholarship to Northwestern University, where he continued his study of dramatics.

In 1944, Heston volunteered for service in the United States Air Force, reaching the rank of staff sergeant as a radio operator and aerial gunner on a B-25. In March of that year, he married fellow Northwestern student Lydia Clarke, to whom he would remain married for the rest of his life. After the war, he received the highest civilian clearance – Q clearance – and acted as a narrator for highly classified Department of Defense instructional films about nuclear weapons.

After the war, the young couple moved to New York. Here, they worked as artists’ models to make ends meet while picking up whatever acting gigs they could. The Hestons had decided to pursue theater and television rather than film. This made things awkward when Charlton Heston was offered a contract with a major studio. He told his wife that he would try just one film to see what it was like. That film was 1950’s Dark City, but his breakthrough came with The Greatest Show on Earth, which won the Oscar for Best Motion Picture in 1952, and was also the highest grossing film of the year. This was also his first collaboration with Cecil B. DeMille.

His two biggest films were The Ten Commandments, where he played Moses, and Ben Hur, where he played the title role and won an Academy Award for Best Actor. The Ten Commandments remains one of the 10 highest-grossing films of all time when adjusted for inflation. He frequently returned to regional theater to get some time on the stage, feeling that it reinvigorated his creative energies, but he never performed on Broadway after starting his film career. A spotty up-and-down career followed his two major works, which left him somewhat marginalized and forgotten by the time Planet of the Apes came out in 1968. He acted as President of the Screen Actors Guild from 1965 to 1971, a position formerly held by future President Ronald Reagan.

It was while filming his next big film, Omega Man, that Heston became an advocate for gun rights and the Second Amendment. It might be that the premise of the film – a man standing against an army of vampire-like zombies (based on the same source material as Vincent Price’s The Last Man on Earth and Will Smith’s I Am Legend) – had him reconsidering gun rights, or it might have been that this was the first period where Second Amendment rights came under serious attack. Regardless, this is when Heston moved more into politics.

Political activism was nothing new to Heston, who had been politically active as far back as 1955. During the early period of his career, he endorsed mostly liberal Democratic political candidates. By the early 1960s, he had moved into Civil Rights activism and was one of the most visible Hollywood actors to do so. After the passage of the Civil Rights Act, he focused his activism on labor issues through the Screen Actors Guild, serving as its president and chief foil to Ed Asner, a fellow traveler of the Communist Party.

In the early 1970s, like many old liberal Democrats, Heston began to shift into neoconservatism. He supported President Richard Nixon in 1972, against the Democratic candidate George McGovern. He did not change his party affiliation until the 1980s. After Nixon, he consistently campaigned for Republican Presidential candidates throughout the rest of his lifetime. He was staunchly conservative, often launching into lengthy diatribes against liberalism in the culture war. While delivering a speech to Brandeis University, he stated “political correctness is just tyranny with manners.” He famously used a shareholders’ meeting to denounce Warner Bros. for releasing the Body Count album featuring “Cop Killer.”

Heston was known as having a flair for the dramatic in his role as the largely ceremonial president of the National Rifle Association. For example, he raised a rifle above his head and declared that presidential candidate Al Gore would have to take it “from my cold, dead hands.” He repeated this gesture in his farewell speech to the NRA. In July 2003, he made his final public appearance, where he was presented with the Presidential Medal of Freedom from then-President George W. Bush.

Heston died on April 5, 2008 of pneumonia. His funeral a week later was attended by over 250 people, including then-Governor of California Arnold Schwarzenegger, Pat Boone, Tom Selleck and Christian Bale. He was inducted into the National Cowboy and Western Heritage Museum's Hall of Great Western Performers in April 2010. There is a charter school, the Charlton Heston Academy, named after him in his boyhood hometown of St. Helen, Michigan.

Heston’s legacy isn’t simply one of advocating for gun freedom. He is also a powerful symbol of an era when Hollywood included patriots, when heroes were taken from historical figures, and America was unashamed of celebrating its rich history.