Sojourner Truth: The Forgotten History of the Slave Who Fought For Women's Rights 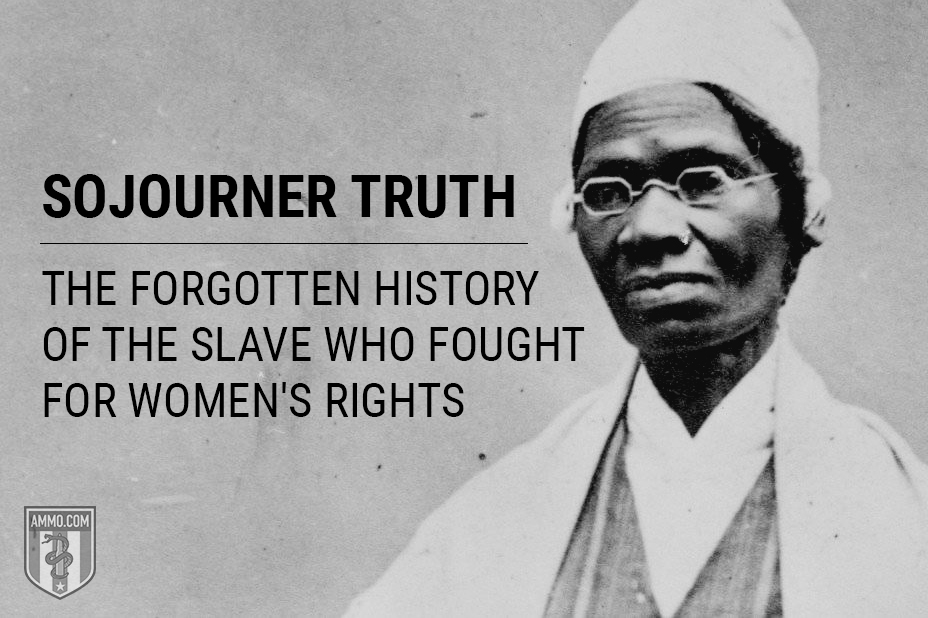 Sojourner Truth was a lot of things. She was a slave. A mother. A wife. An activist. A preacher. A woman who wasn’t afraid to stand up for what she believed in, regardless of the consequence. A woman who spoke her mind, even when everyone around her disagreed.

Filled with such courage and bravery, she could see the potential of liberty for all, even when faced with adversities far worse than people see today. Sojourner Truth was never a victim of circumstances, even though they were bleak for much of her life. When life knocked her down, she’d get back up, ready to fight again.

She lived by her own standard, even though it was considered radical. She didn’t care. She was here to speak her truth, which she never failed to do. Even her self-given name says as much. “Sojourner” means to “to stay awhile,” combined with Truth.

To stay awhile in truth. To stand in truth.

Many would say that’s exactly how she spent her life.

Sojourner Truth: From Slavery to Freedom

Sojourner Truth was brought into this world a slave named Isabella Baumfree around 1797. Born on a plantation about 95 miles north of New York City, Belle only spoke Dutch until she was nine years old when she was sold, along with a herd of sheep, for $100. She would be sold two more times by the age of 13, when she found herself owned by John Dumont and his second wife, Elizabeth.

Truth was not treated well as a slave and would recall her owners as cruel and punitive. At 18, she fell in love with a slave boy named Robert, who was owned by a neighbor. When his owner found out the boy was in a relationship with a slave from a different master, he was severely beaten, and Truth never saw him again. It’s believed that her first child, James, may have been Robert’s.

Her second child, Diana, is most likely the result of rape by Dumont. Truth birthed three other children to Thomas, a slave she eventually married, who was also owned by Dumont.

In 1826, the year Dumont told her he’d grant her freedom, then refused, Truth took her youngest child who was still an infant, and left the Dumont estate, escaping from slavery. Years later, when talking of the event, Truth said, “I did not run off, for I thought that wicked, but I walked off, believing that to be alright.”

Two years later, when Dumont unlawfully sold Truth’s son, Peter, she took him to court. Truth became the first black woman to win a case against a white man, and gained custody of her son.

She spent the next decade working as a housekeeper and servant, and in 1843, Isabella Baumfree had a religious experience. She converted to Methodism and changed her name to Sojourner Truth. She moved from the city and devoted her life to serving God through preaching about the abolition of slavery and equal rights for women.

In 1844, she joined the Northampton Association of Education and Industry, a self-sufficient religious and abolition group that lived on over 470 acres, raising livestock and running a sawmill, gristmill, and silk factory. While there, she met many heroes within the abolition movement, including William Lloyd Garrison, Frederick Douglass, and David Ruggles.

Sojourner Truth: A Radical Among Radicals

At six feet tall, Truth stood out in a crowd, but it wasn’t just for her height. She was a woman who said what she thought and what she believed in without reserve. She gave her first anti-slavery speech in 1845 in New York City, and was soon considered one of the most inspiring speakers of the era. In 1851, Truth gave her most famous speech, entitled “Ain’t I a Woman?” at the Women’s Convention in Akron, Ohio.

Although it’s held in esteem today, the speech is surrounded by controversy. Given extemporaneously, the speech focused on not just being black, but on being a woman, something that was unusual even amongst abolitionists, who only focused on the rights of black men, not black women.

The original speech was reprinted in two different local newspapers, and the phrase “Ain’t I a Woman?” wasn’t recounted in either one. But 12 years later, in a transcription published by Frances Dana Barker Gage, the speech had changed. “Ain’t I a woman?” appeared four times and the whole speech had a southern feel. This was odd, given that Truth was from New York and Dutch was her first language. But a southern dialect fit the narrative that was being created at the time, and after multiple publications of the speech by Gage, the modified version has stood the test of time.

Truth’s advocation of rights for not just blacks, but women – and even black women – was considered radical, even in her circle. She was ostracized among the abolitionists, although she did remain friends with others within the equal rights movements, including Susan B. Anthony.

Perhaps it was also her unorthodox and no-BS attitude that made her unliked. At one speech in 1858, after being ridiculed and called a man, Truth revealed her breasts to the crowd to prove her womanhood.

Sojourner Truth: Fighting Through the War and Beyond

When the Civil War broke out, Truth did what she could to help the cause. She recruited black men to fight for the Union, and her grandson even enlisted and served in the 54th Massachusetts regiment. Truth started working for the National Freedman’s Relief Association in 1864, which led her to meet with President Abraham Lincoln regarding the needs of black people in America.

After the war, Truth fought to secure the promised land grants (40 acres and a mule) for the black men who fought in the war. She even met with President Ulysses Grant in 1870, but was unsuccessful in her attempts.

She continued to fight for equal rights for both blacks and women until she died of infected leg ulcers on November 26, 1883. Nearly blind and almost deaf, Truth spent her life fighting for what she believed in, regardless of the cost.

Although Truth saw the 13th Amendment passed, she did not live to see women granted equal rights. Even so, Sojourner Truth has been recognized as having a huge influence on the women’s equality movement and that her influence helped pave the way for the 19th Amendment, which wasn’t ratified until 1920.

In recognition of her efforts, Truth, along with four other women and the 1913 Women’s Suffrage Procession, will be featured on the $10 bill in 2020, as part of the 100-year celebration of women winning the right to vote. Truth was also memorialized in 2018, with the U.S. Navy naming a ship the USNS Sojourner Truth. She was the inspiration for the NASA Mars Pathfinder Robotic Rover, “Sojourner.” Smithsonian Magazine listed her in the “100 Most Significant Americans of All Time.” She has been inducted into the Women’s Hall of Fame and her face has graced a USPS stamp.

Although recognized as a hero today, Sojourner Truth’s life was not an easy one. Yet even when, literally, stoned and beaten, Truth continued to fight with words and with dignity. She stayed with her truth and worked to change the world.