Elmer Keith: The Forgotten History of the Firearms Author and Father of Big Bore Handgunning 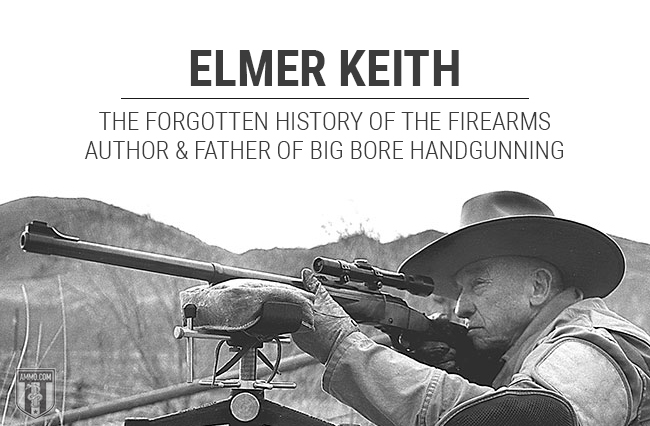 There’s really no two ways about it: They don’t make them like Elmer Keith anymore. He was known for wearing big Stetson hats, smoking big cigars, and hunting big game with handguns long before anyone else did. In Keith’s day, handgun rounds were either big and slow or fast and small. Confronted with this kind of ballistics market, Keith sought to make bigger rounds go faster. This is how Keith became the father of the magnum cartridges that we use today: the .357, the .41 and the .44.

Keith was perhaps most associated with the .44 magnum, with which he could dispatch a mule deer at 600 yards. He was also a prolific wildcatter of both pistol and rifle rounds, who was always looking for ways to make big rounds bigger. Indeed, Keith was very vocal about his distaste for smaller rounds, and would even express it to contemporaries such as Jack O'Connor who championed the 270 Winchester.

Keith was born and raised in Hardin, Missouri, right on the Western frontier, and had the opportunity to meet many gunfighters and Civil War veterans. He claimed, in fact, that it was the town barber, a former gunfighter, who taught him how to shoot using linoleum in back of the shop.

The Hotel Fire That Changed Everything

In 1911, Keith was burned very badly in a fire in Missoula, Montana. These were scars that he wore for the rest of his life and the fire would likely have killed just about any other man. But Keith refused to die. It was so bad that his chin became fused with his right shoulder and his left hand was turned completely upside down. His father contacted several doctors in the area to perform a surgery to fix his hand, but they all refused, saying that he probably wouldn’t even live to see 21 anyway.

It finally fell on Keith’s father to break his hand and reset it. After a trip down to the local liquor store to get a bottle of 100-proof Old Granddad, Keith told his father to break and set his hand no matter how much he passed out or screamed. Keith was then fitted with a special glove, and over the course of two years, regained the normal use of his hand through a lot of painful use. The hand was deformed, but Keith could use it to both rope steer and shoot pistols.

He became one of the most famous gun writers of all time and regularly responded to his own correspondence without the help of a secretary. He received, on average, between 300 and 500 letters every month. Among the dedicated six gunner community, these letters are held as prized mementos.

Keith was a prolific gun writer throughout the early part of the 20th Century. His first published work was a humble letter written to American Rifleman in August 1925. His final original manuscript was written in the 1980s.

Keith was not the tinkerer that many wildcatters are. He was a simple man: When he found something that he liked, he stuck with it. However, when the thing that he wanted didn’t exist, he figured out a way to make it. This is how he arrived at the 44. Magnum.

In 1945, he exploded a .45 Colt SAA and switched over to the .44 Special. Up until that point, Keith had never even seen a 44 Special. But once he got his hands on one, the world of firearms was about to change forever. He created the Keith bullet, which has become somewhat genericized today, but had very specific specifications when Keith first designed it. Thousands of six gunners today still make Keith bullets to his original instructions.

Before the advent of the 44 Magnum, Keith spent years custom loading his 44 Specials to make them more like the 44 Magnum that was to come. However, Keith still wanted something better and so he approached Smith & Wesson, who then collaborated with Remington to give birth to what would become one of the most iconic rounds in American firearms history. Remington was in charge of the ammo and Smith & Wesson was in charge of the weapon, which was the Model 29.

It’s worth briefly reflecting on just how iconic the Model 29 was, because this was a large part of what drove sales for the .44 Magnum. In 1971, Dirty Harry was released. And can you imagine Harry Callahan with a Colt 1911, a Luger, or another equally iconic but semi-automatic weapon? Of course not. Demand for the Model 29 was so sharp after the release of that film that people were easily paying three times the list price because gun shops simply could not keep them in stock.

The 44 Mag led to a revolution in ammunition and sparked a drive for greater and greater stopping power among the American public. We have Elmer Keith to thank for it. He was also instrumental in the development of truncated cone solid ammo, the 41 Remington Magnum and the 357 Magnum.

Keith had a debilitating stroke in 1981, which effectively ended his career. His books include topics like six guns, hunting big game, shotguns, and his own life story – the last of which is a fascinating read if there ever was one.

But his legacy lives on as anyone who has ever hunted with a handgun can tell you. Try dropping a deer or a wild boar with a 357. It’s simply no match for the .44 Magnum, which is, at least in the world of firearms, as iconic an American creation as Coca-Cola, Levi’s and Harley-Davidson. Keith was a man with a total inability to quit – and we have him to thank for it.