Susan B. Anthony: The Forgotten History of the Woman Who Inspired the 19th Amendment 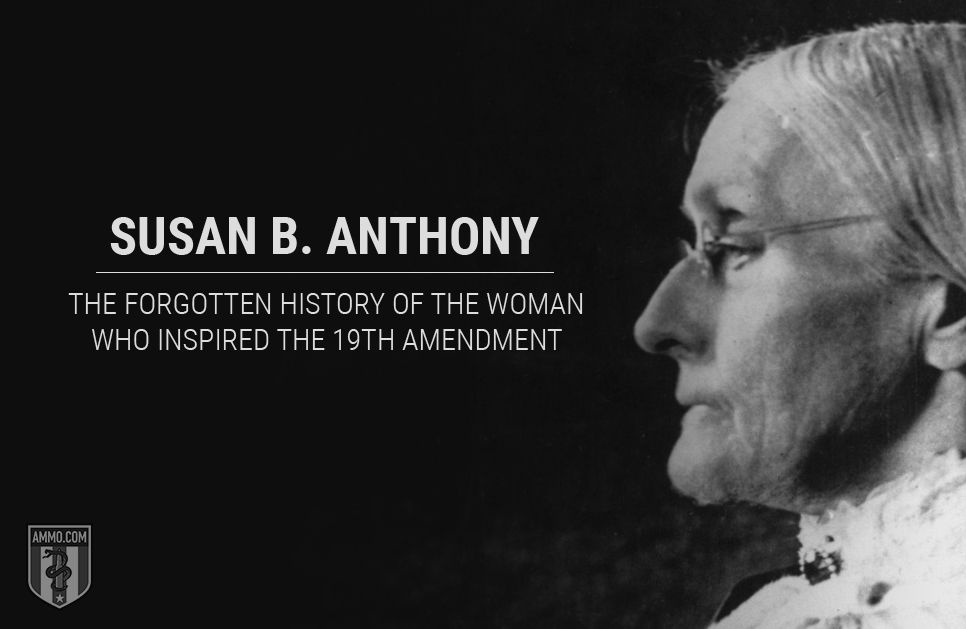 From humble beginnings to crusading for women’s rights, Susan Brownell Anthony was a woman who devoted her life to create change. Throughout her time, she worked as a teacher, a headmistress, and as an activist, paving the way for future generations on the path of equal opportunity, freedom, and liberty for all. She was an abolitionist, supported the temperance movement (an organized effort to limit, or even prohibit the sale of alcohol), and was perhaps the most known suffragist of the 19th century. She was also the woman brave enough to ask the American public, “Are women persons?”

Susan B. Anthony and the Making of a Social Activist

Susan B. Anthony was born on February 15, 1820, to Quaker parents in Massachusetts. One of eight siblings, Susan was surrounded by political engagement, as her parents were known supporters of the abolition and temperance movements.

In 1826, the Anthony family moved to Battenville, New York, where Susan attended a district school then a small local school, which her father set up. She was then sent to a Quaker boarding school near Philadelphia until 1838, when she and her sister were called home. The Depression, which had hit the year before, had caused her father to go bankrupt and lose the family home.

After relocating to Rochester, NY, in 1845, Susan’s parents become more involved in the anti-slavery movement and their home often housed abolitionist meetings. Known as an activist gathering place, renowned social reformers, such as Frederick Douglass and William Lloyd Garrison, were often in attendance at the Anthony home.

Susan B. Anthony and the Strive for Equality

In 1848, Anthony, who had been working as a teacher at a Quaker seminary, joined the teacher’s union and began advocating for equal pay. At the time, male teachers were making $10 a month, while female teachers were only being paid $2.50 a month.

Three years later, in 1851, Anthony was introduced to Elizabeth Cady Stanton at an anti-slavery meeting in Seneca Falls. Stanton recalled the encounter, saying of Anthony:

“There she stood with her good earnest face and genial smile, dressed in gray silk, hat and all the same color, relieved with pale blue ribbons, the perfection of neatness and sobriety. I liked her thoroughly, and why I did not at once invite her home with me to dinner, I do not know.”

The two formed a quick friendship and alliance, and developed a partnership in striving for social change that lasted 50 years. Anthony and Stanton balanced each other well. Stanton was a wife and mother; Anthony a single woman who was able to go on the road to speak. Stanton acted as the theorist and writer, while Anthony was the strategist and organizer. By the time she was speaking as a full-time job, Anthony would engage in anywhere from 75 to 100 speaking engagements a year.

In 1872, Anthony and her three sisters did the unthinkable. They voted in the presidential election. Two weeks later, Anthony was arrested and put on trial. While awaiting trial, she took the time to speak to the public, arguing that women already had the right to vote, via the 14th Amendment:

“We no longer petition legislature or Congress to give us the right to vote, but appeal to women everywhere to exercise their too long neglected ‘citizen’s right’.”

During the trial, Anthony was unable to testify because of being a woman (which automatically meant that her testimony was not “competent”), but her lawyer gave her arguments. She was convicted and fined $100, which she refused to pay, saying “Resistance to tyranny is obedience to God.”

In reaction to her 1873 trial United States v. Susan B. Anthony, Anthony gave her now famous “On Women’s Right to Vote” speech, where she challenged people’s beliefs on women’s suffrage. During the speech, she said:

“It was we, the people, not we, the white male citizen; nor yet we, the male citizens; but we, the whole people, who formed the Union...The only question left to be settled now is: Are women persons?”

Throughout her years of advocacy, Anthony appeared before every Congress between 1869 and 1906. She was invited by President William McKinley to celebrate her 80th birthday at the White House. In 1905, she met with President Theodore Roosevelt, lobbying for women’s suffrage, and on her 86th birthday, she delivered her “Failure is Impossible” speech in Washington, DC, which would become the future motto of the movement.

In addition to her years of speeches, Anthony and Stanton edited three volumes of The History of Woman Suffrage, which detailed their wins and losses in the battle for women’s right to vote. She also helped record her own story in the 1898 book, The LIfe and Work of Susan B. Anthony: A Story of the Evolution of the Status of Women.

Anthony died on March 13, 1906, 14 years before women were granted the right to vote. In her obituary, which was published in The New York Times, Anthony was quoted as saying:

“To think I have had more than 60 years of hard struggle for a little liberty, and then to die without it seems so cruel.”

Even though she didn’t live to see it, Anthony was instrumental in the groundwork of the suffrage movement and its success. The 19th Amendment, which boasts her name as the Susan B. Anthony Amendment, adopted in 1920, gave every adult American woman the right to cast her vote.

In 1979, Susan B. Anthony was again commemorated by having her face on the new $1 coin. She was the first woman ever to be honored on U.S. currency or coinage.