Founding Fathers Quotes on Hope for Peace, Hesitation for War & Restrictions for Military 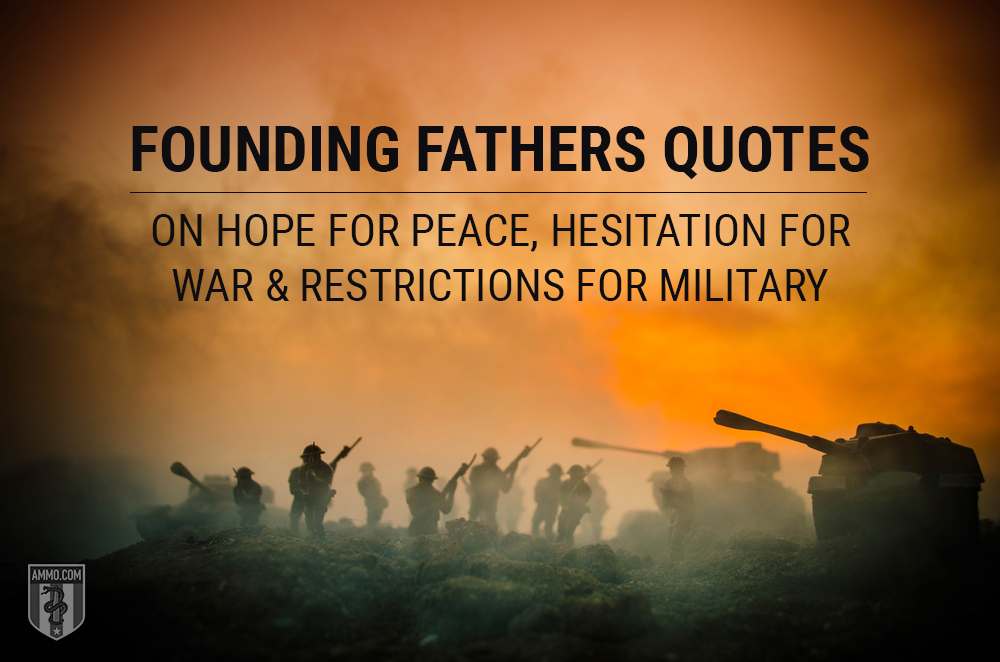 Perhaps the most disregarded principle of the early American republic is the prohibition of large, standing armies. The military budget makes up the majority of the bloated federal budget, making up more than half of all government spending. This is your tax dollars at work.

The Founders were not shy about fighting when American interests were in danger. An example of this is the little-known Barbary Wars, two wars at the turn of the 19th Century where the United States fought Barbary Pirates over the enslavement of American sailors. However, it would have been unimaginable to the Founders that wars would be fought over such abstract concepts as “democracy,” where vital American interests were not in play. Peace was seen as part and parcel of a free republic, one which sought friendship and trade with all nations, rather than aggressive wars of choice and empire. 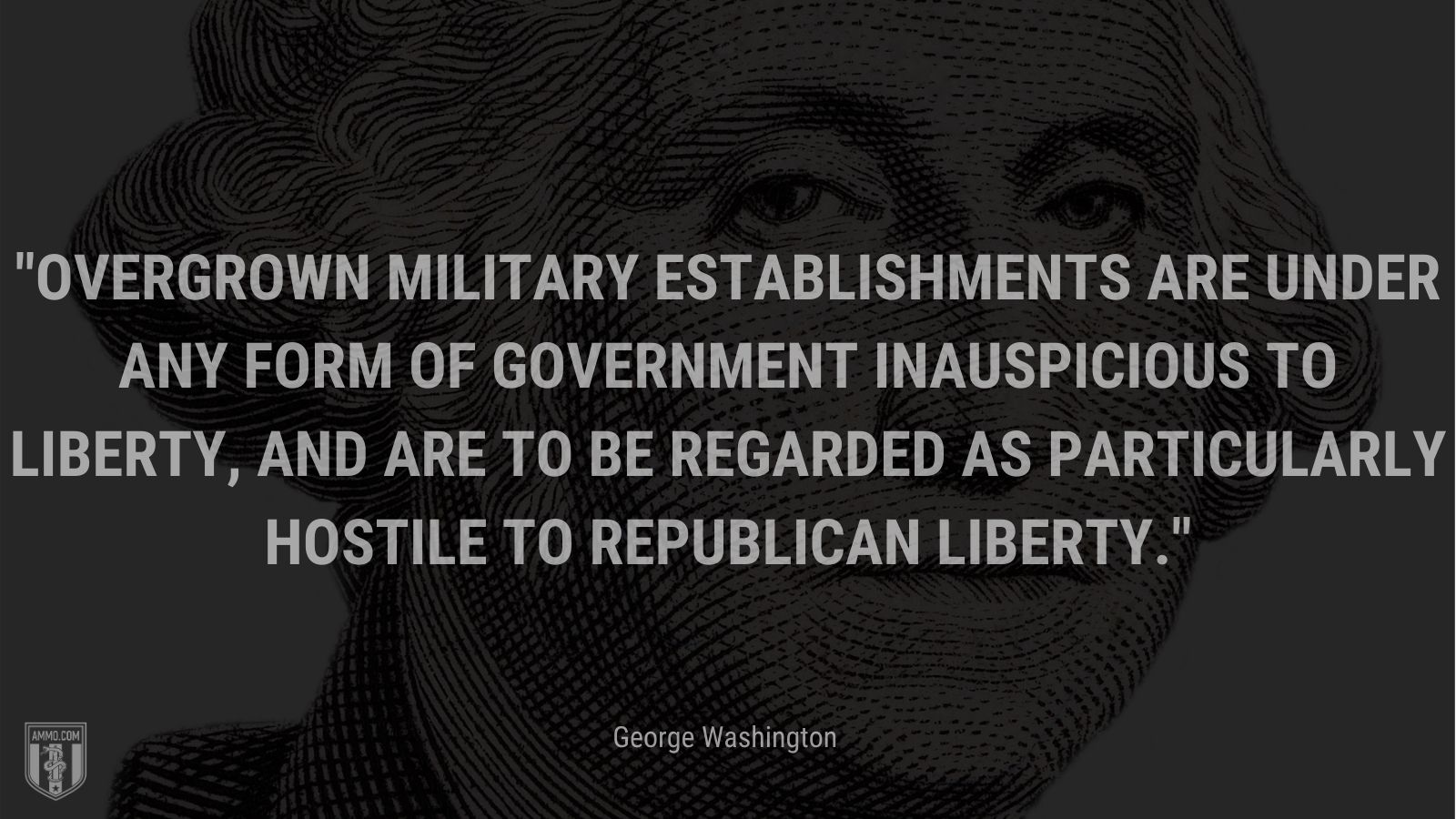 “Overgrown military establishments are under any form of government inauspicious to liberty, and are to be regarded as particularly hostile to republican liberty.” 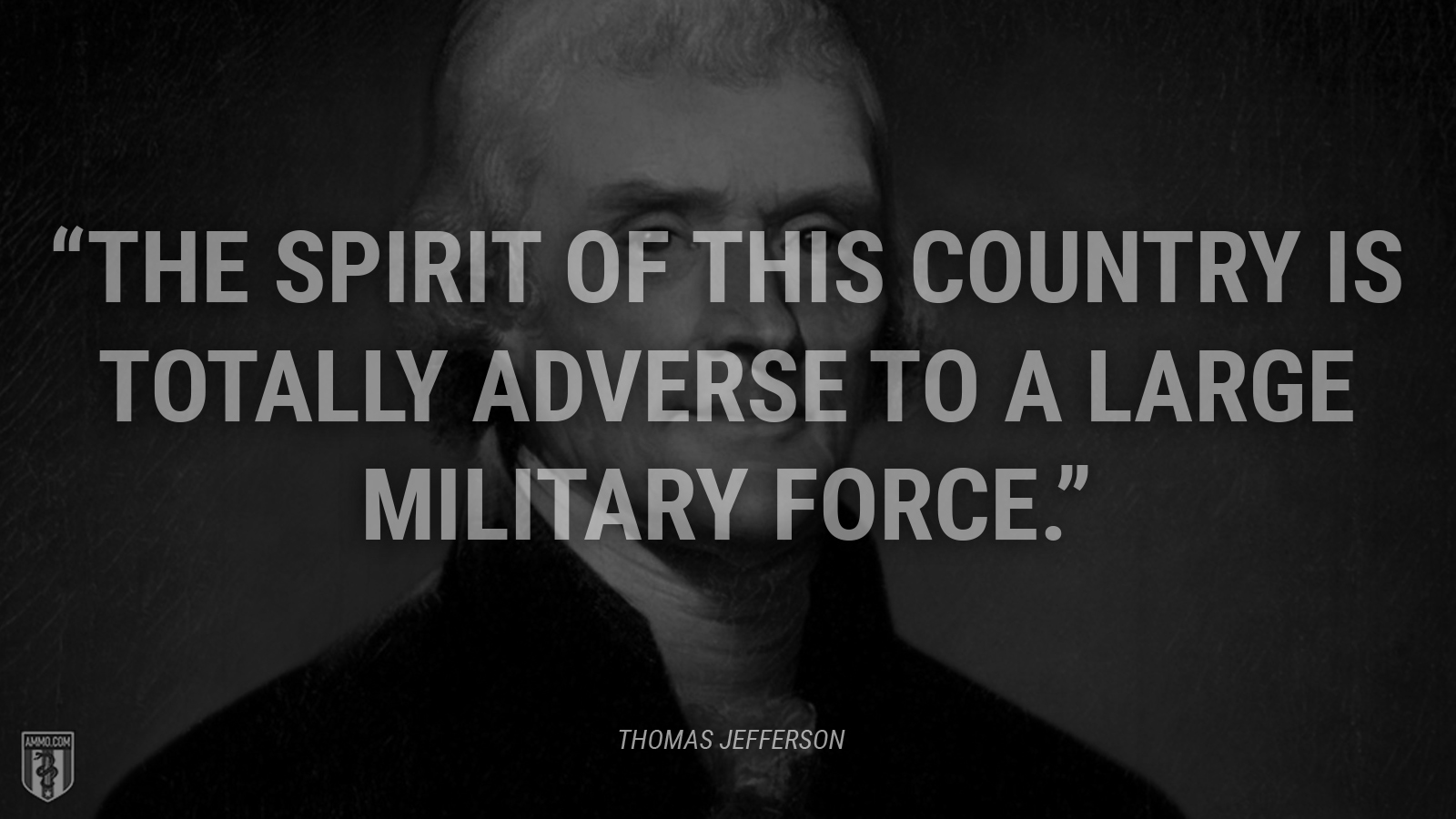 “The spirit of this country is totally adverse to a large military force.” 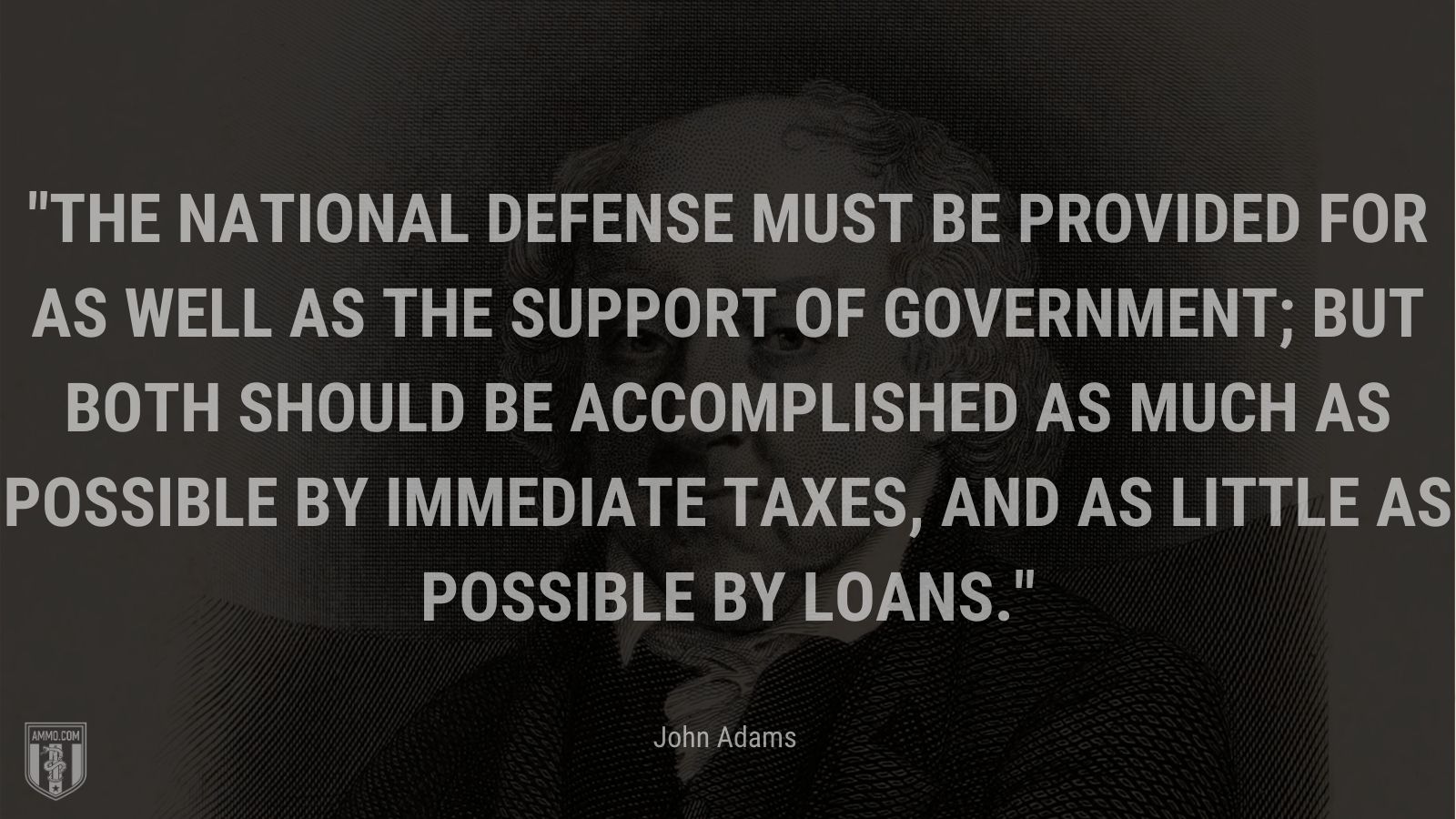 “The national defense must be provided for as well as the support of Government; but both should be accomplished as much as possible by immediate taxes, and as little as possible by loans.” 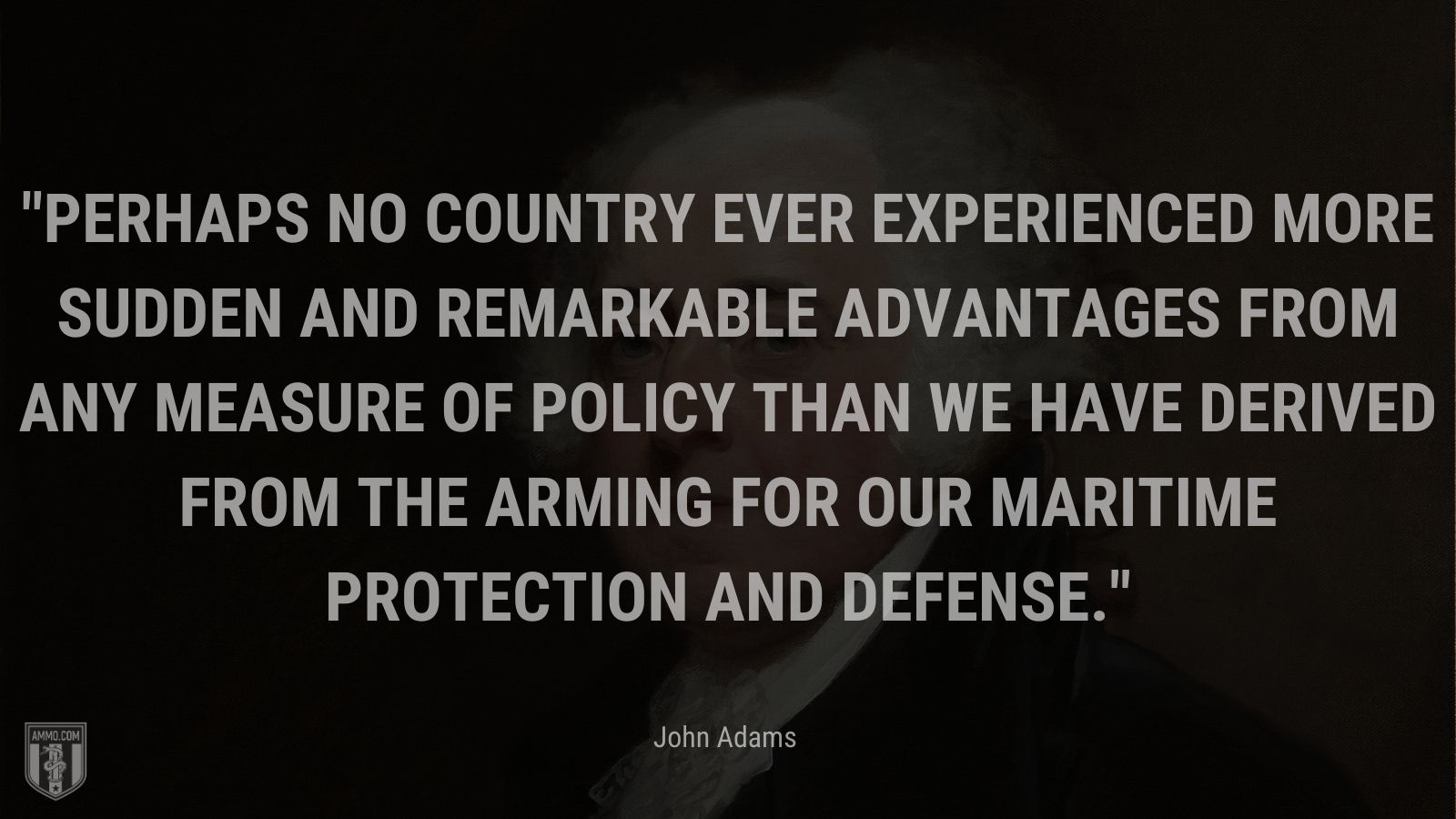 “Perhaps no country ever experienced more sudden and remarkable advantages from any measure of policy than we have derived from the arming for our maritime protection and defense.” 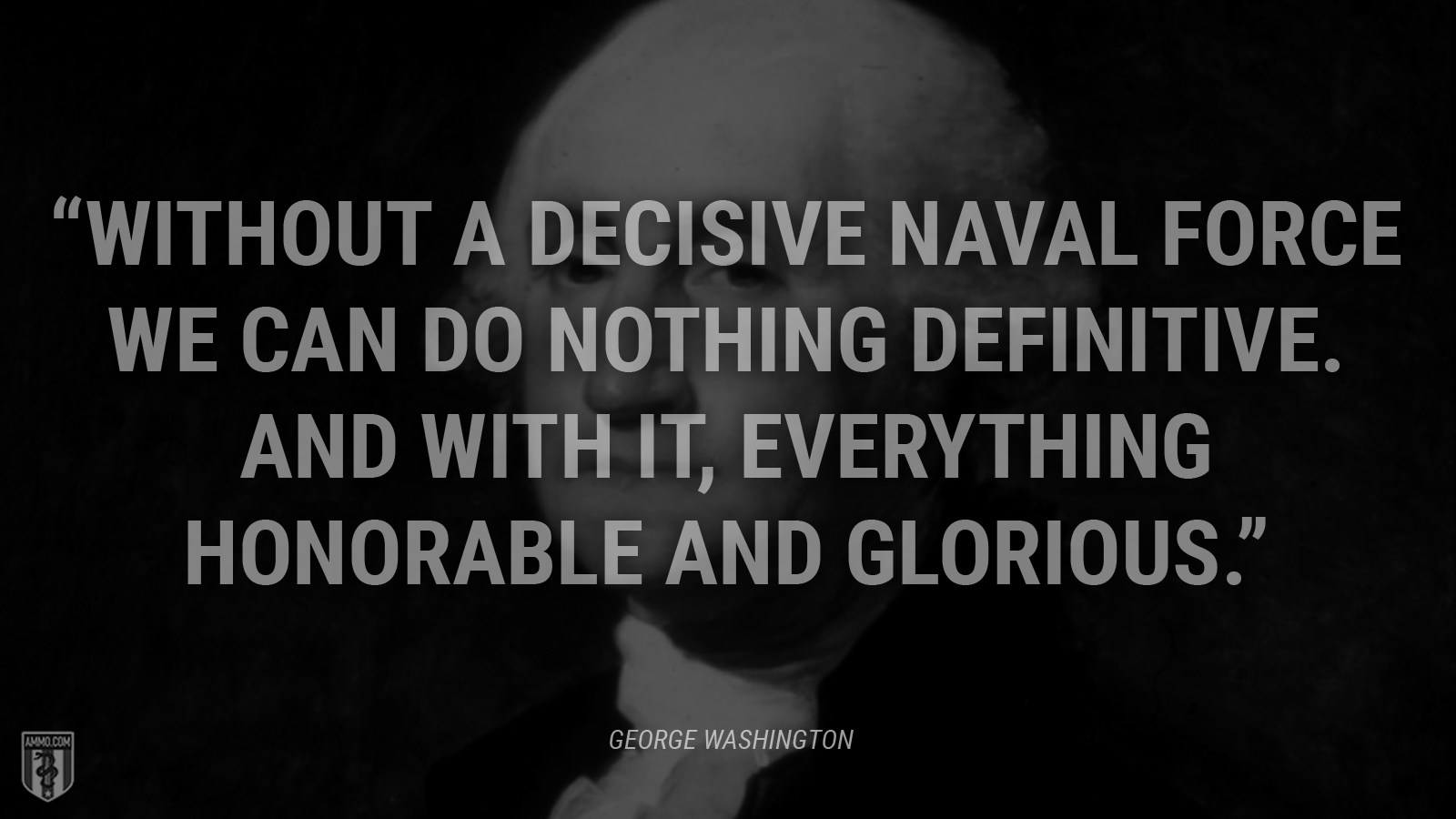 “Without a decisive naval force we can do nothing definitive. And with it, everything honorable and glorious.” 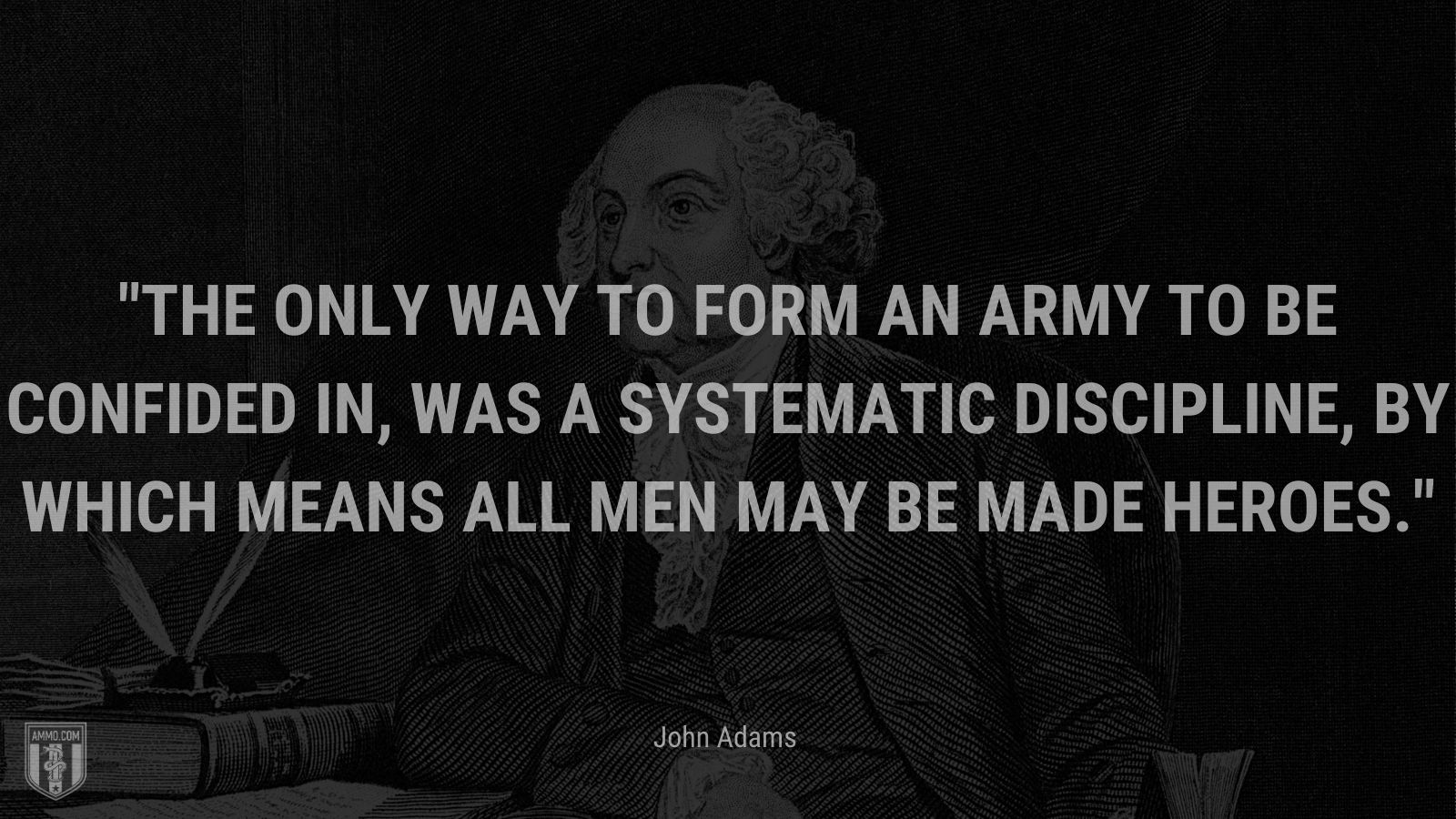 “The only way to form an army to be confided in, was a systematic discipline, by which means all men may be made heroes.” 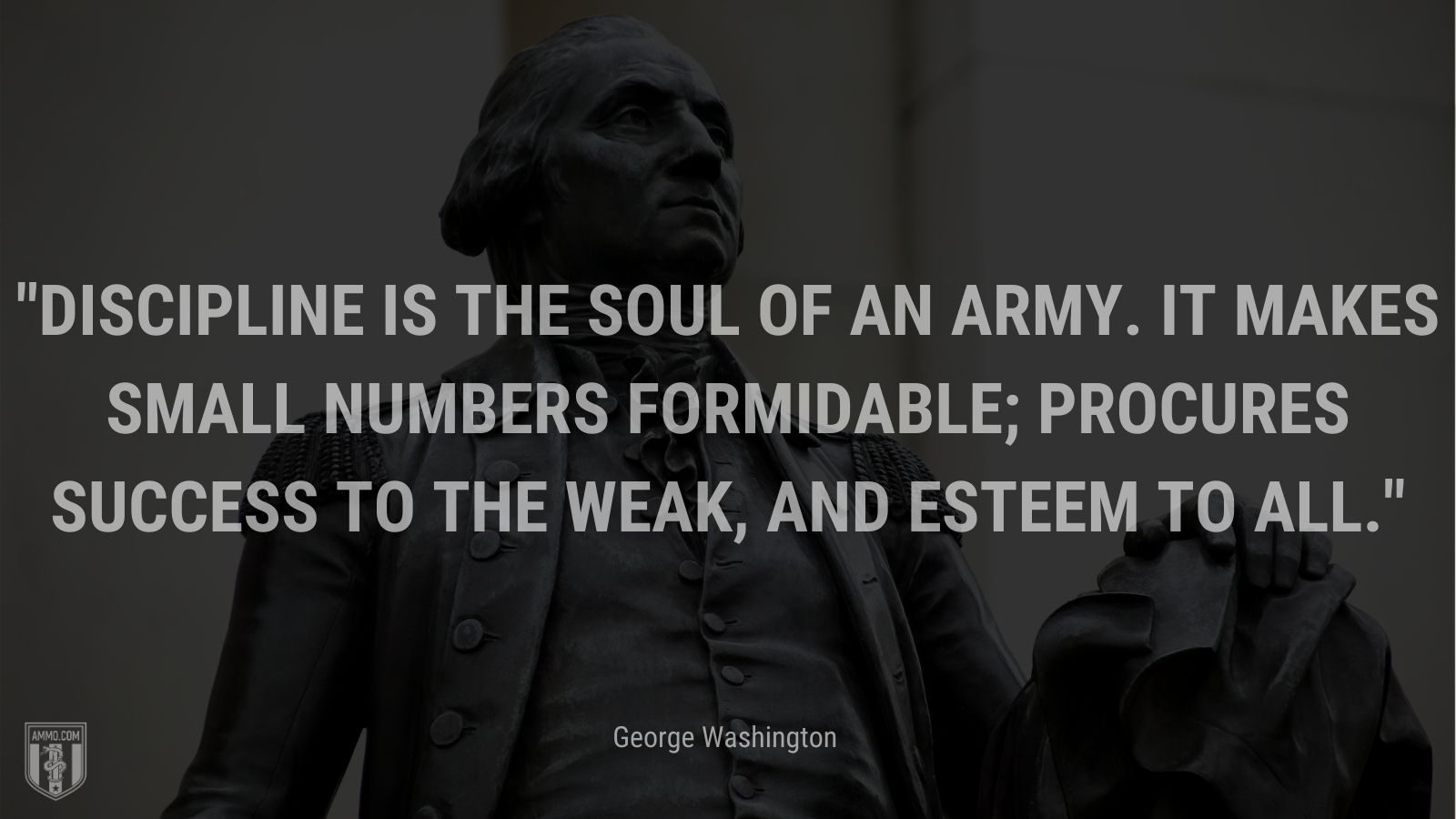 “Discipline is the soul of an army. It makes small numbers formidable; procures success to the weak, and esteem to all.” 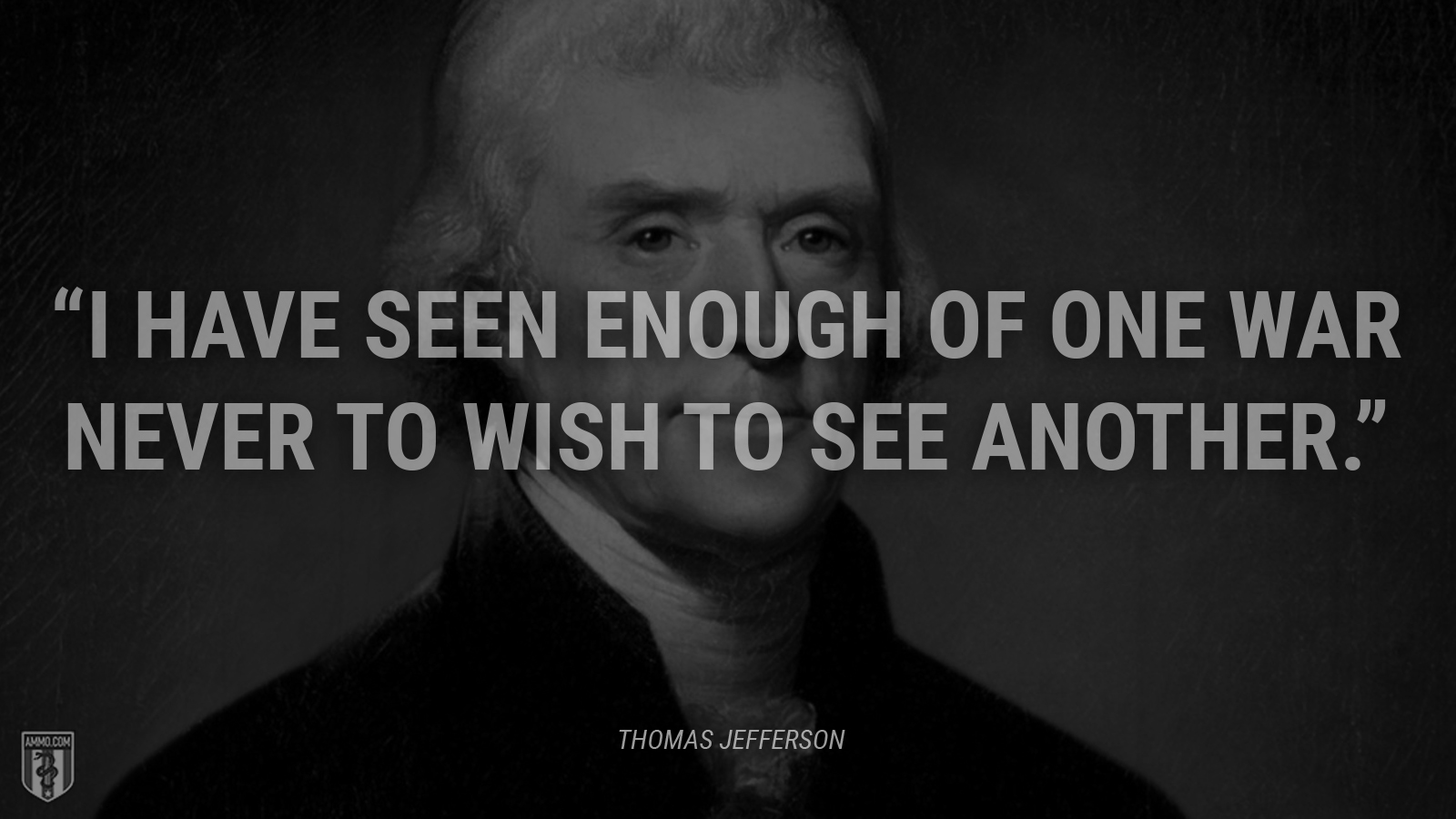 “I have seen enough of one war never to wish to see another.” 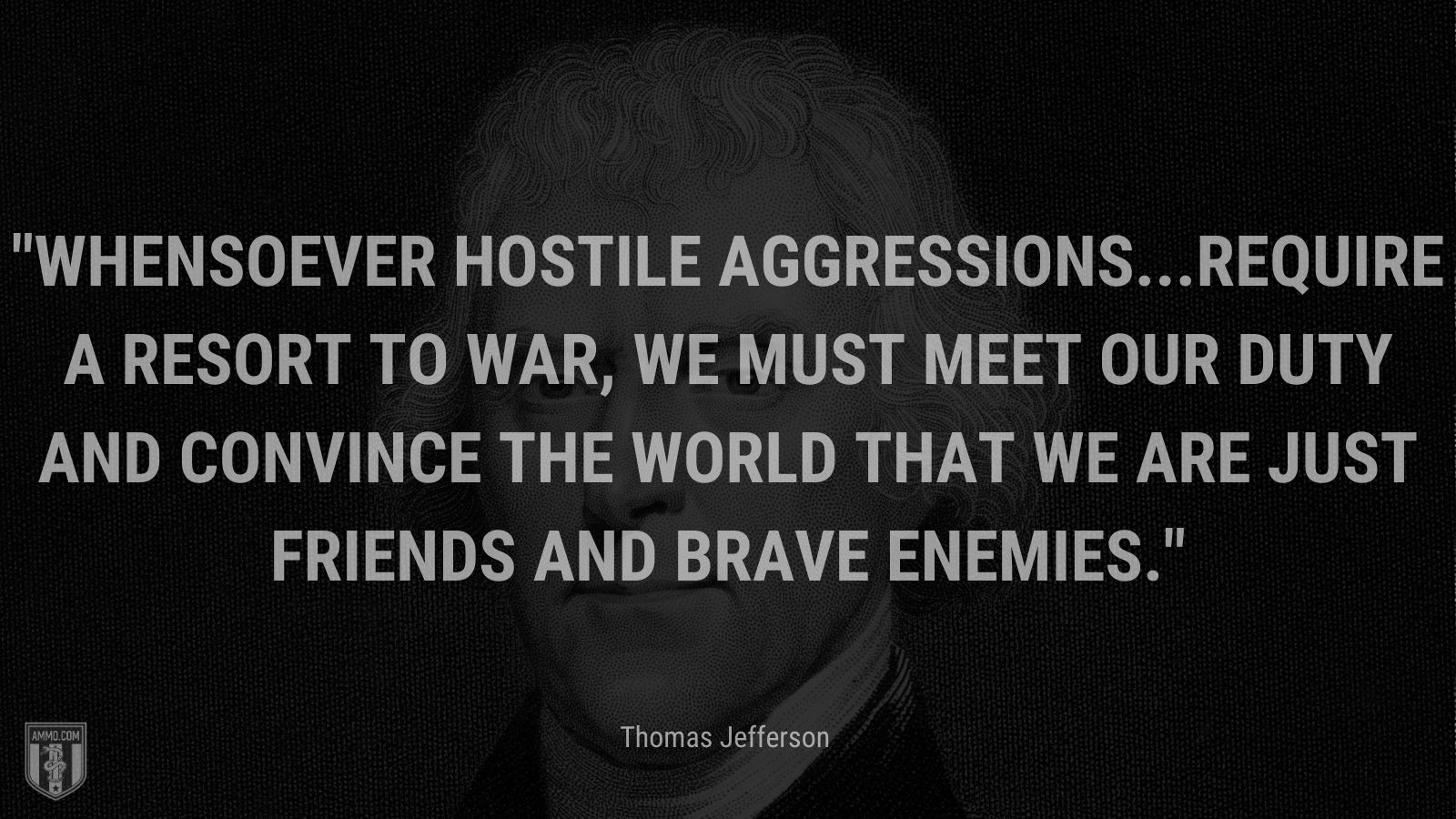 “Whensoever hostile aggressions...require a resort to war, we must meet our duty and convince the world that we are just friends and brave enemies.” 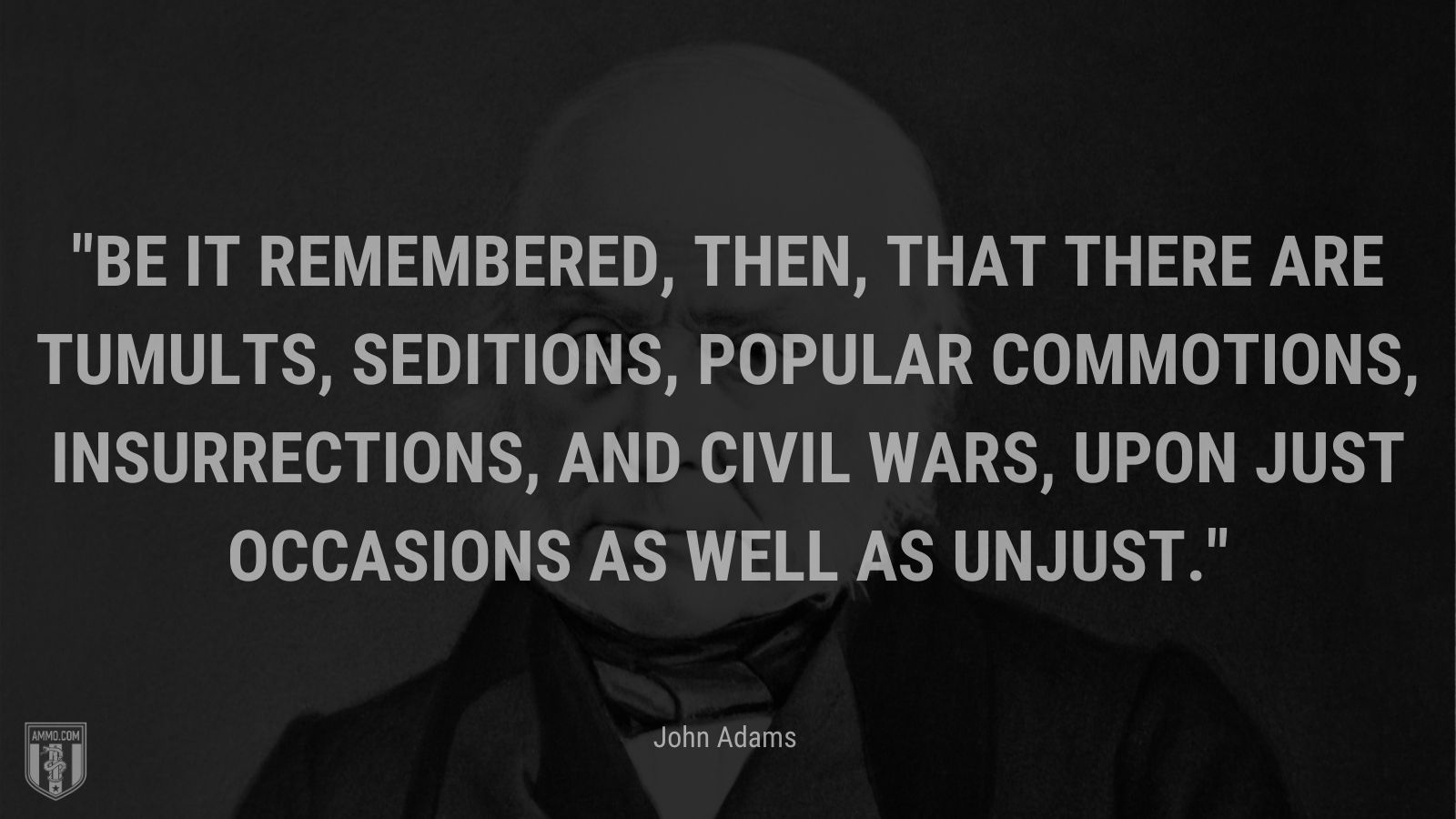 “Be it remembered, then, that there are tumults, seditions, popular commotions, insurrections, and civil wars, upon just occasions as well as unjust.” 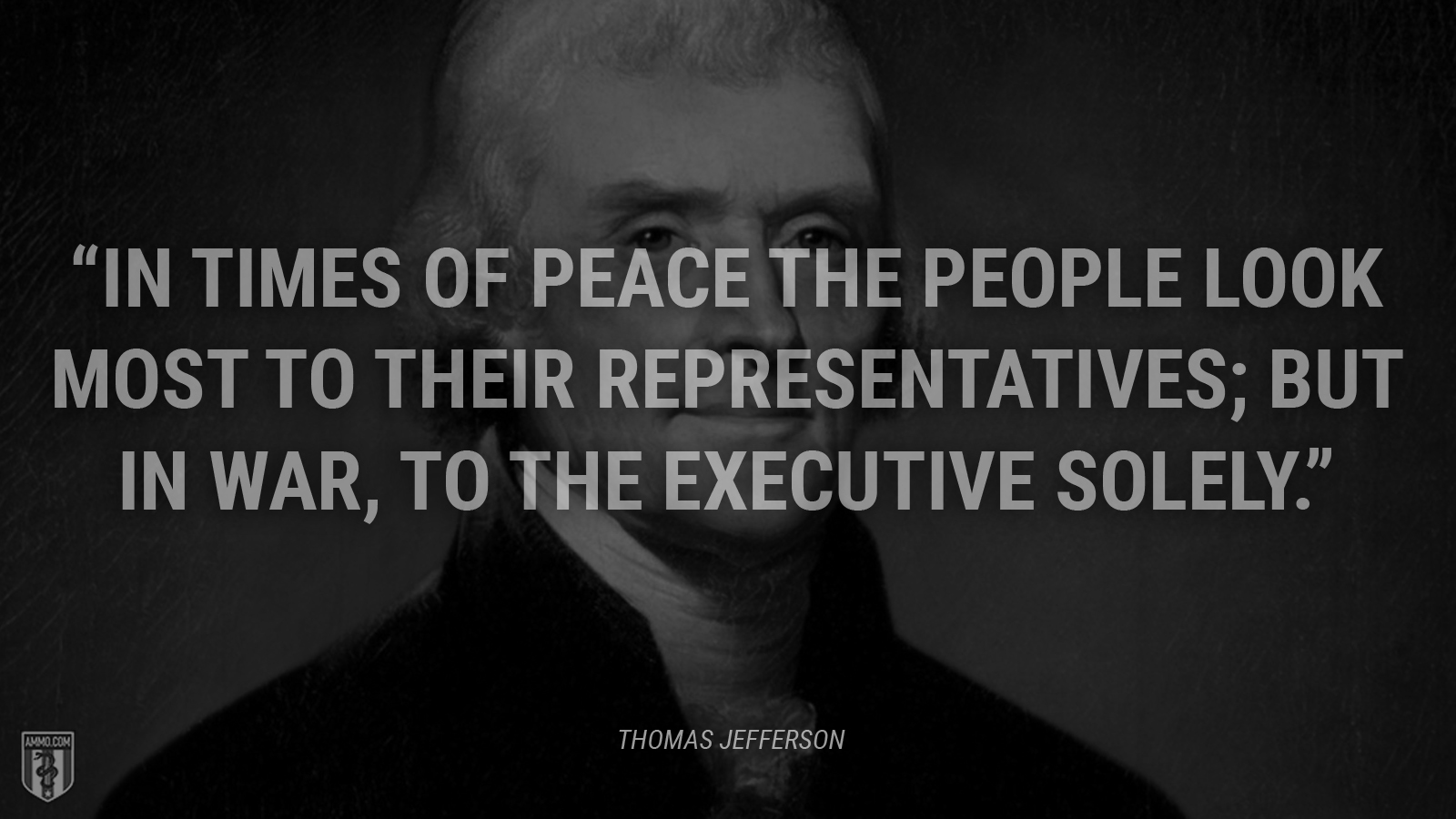 “In times of peace the people look most to their representatives; but in war, to the executive solely.” 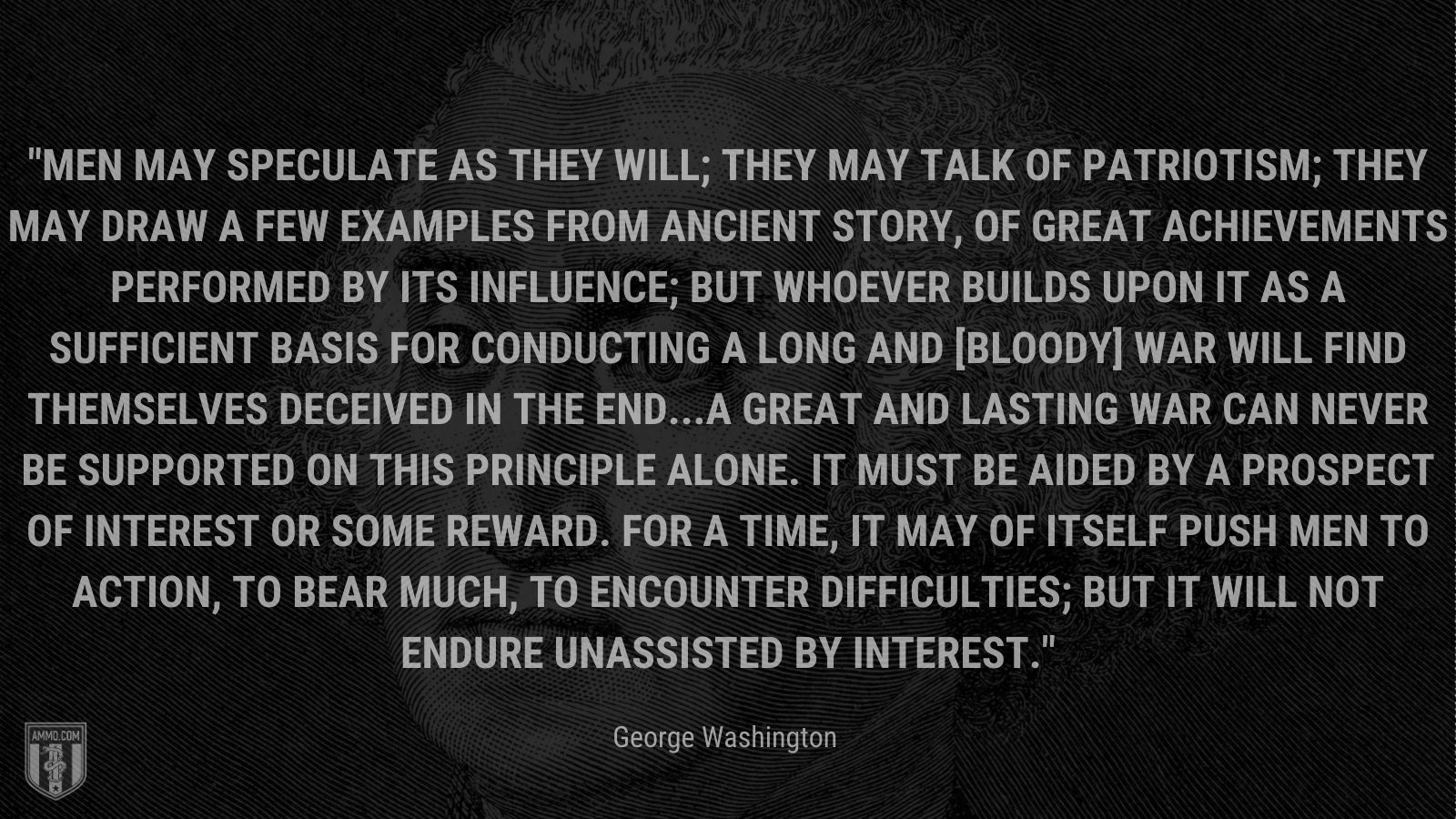 “Men may speculate as they will; they may talk of patriotism; they may draw a few examples from ancient story, of great achievements performed by its influence; but whoever builds upon it as a sufficient Basis for conducting a long and [bloody] War will find themselves deceived in the end...A great and lasting War can never be supported on this principle alone. It must be aided by a prospect of Interest or some reward. For a time, it may of itself push Men to Action, to bear much, to encounter difficulties; but it will not endure unassisted by Interest.” 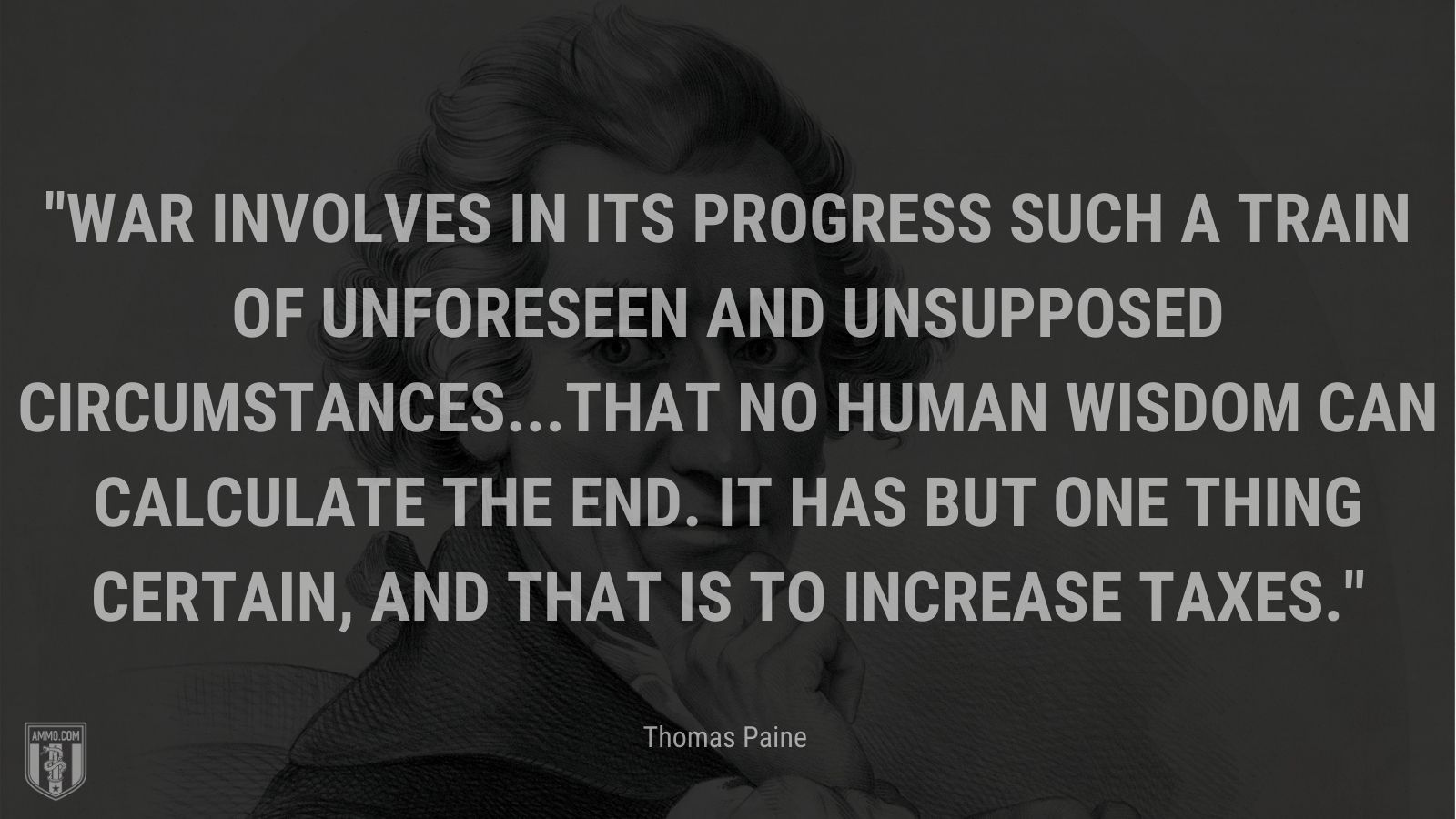 “War involves in its progress such a train of unforeseen and unsupposed circumstances...that no human wisdom can calculate the end. It has but one thing certain, and that is to increase taxes.” 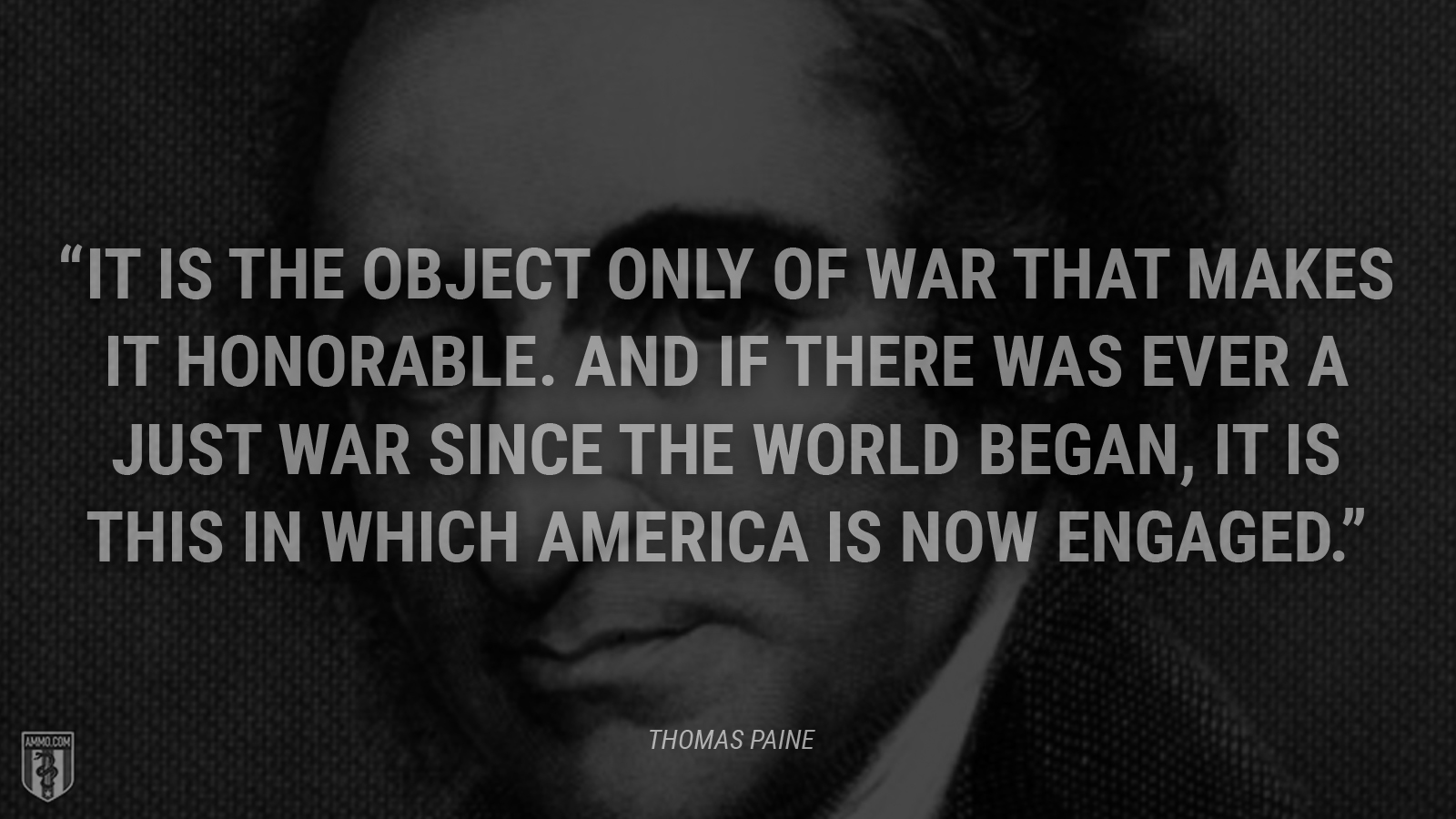 “It is the object only of war that makes it honorable. And if there was ever a just war since the world began, it is this in which America is now engaged.” 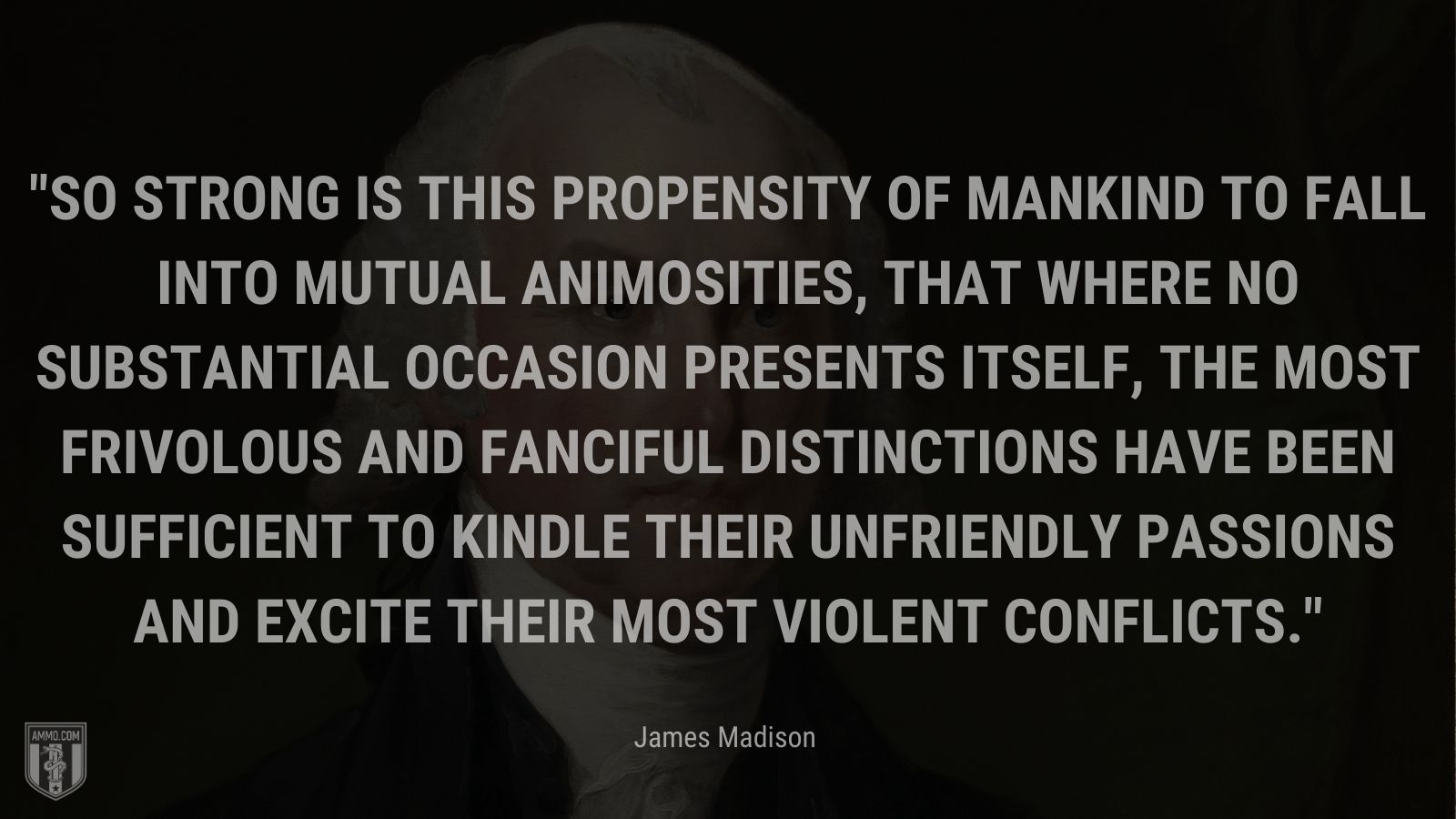 “So strong is this propensity of mankind to fall into mutual animosities, that where no substantial occasion presents itself, the most frivolous and fanciful distinctions have been sufficient to kindle their unfriendly passions and excite their most violent conflicts.” 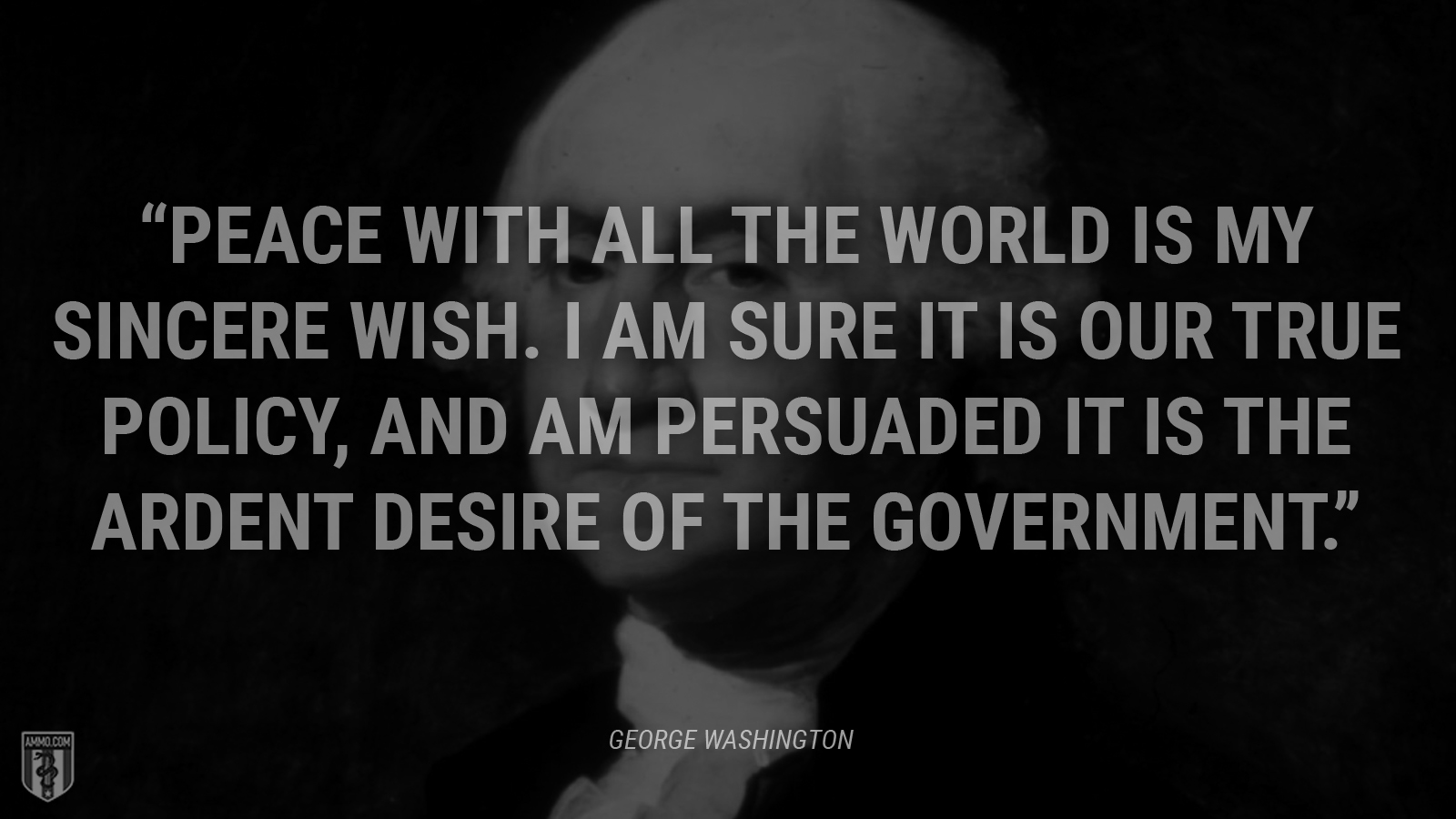 “Peace with all the world is my sincere wish. I am sure it is our true policy, and am persuaded it is the ardent desire of the government.” 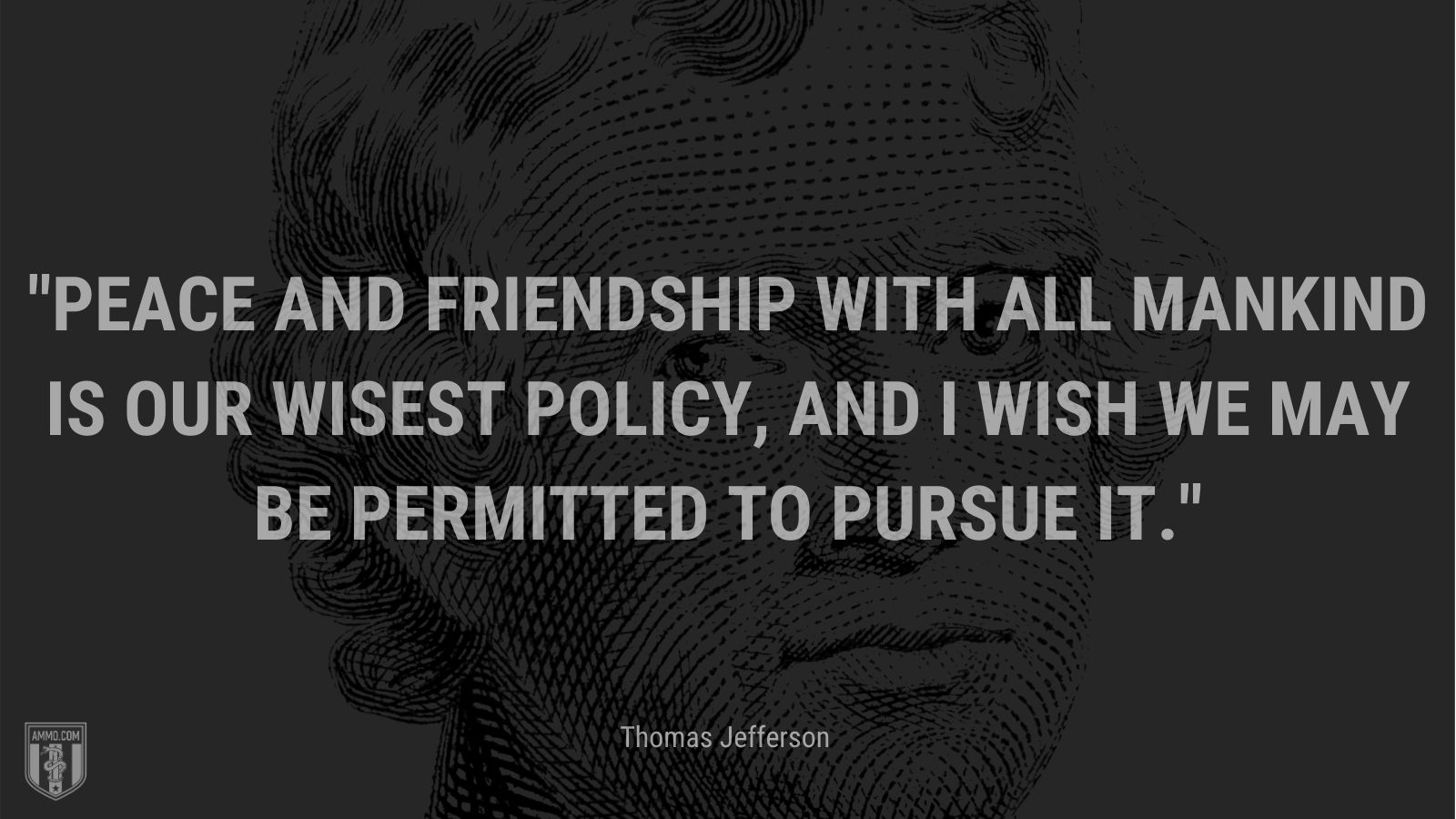 “Peace and friendship with all mankind is our wisest policy, and I wish we may be permitted to pursue it.” 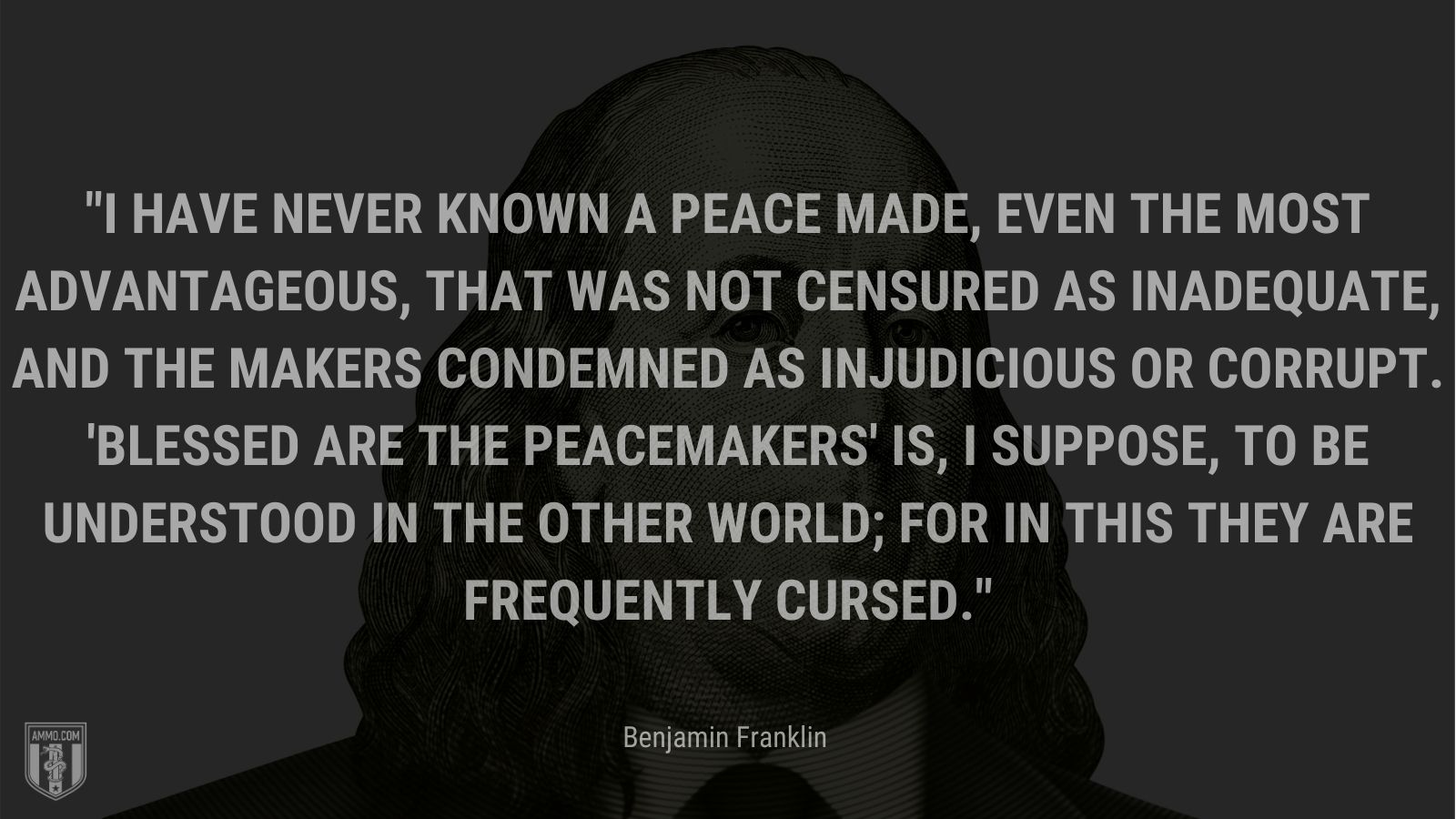 “I have never known a peace made, even the most advantageous, that was not censured as inadequate, and the makers condemned as injudicious or corrupt. 'Blessed are the peacemakers' is, I suppose, to be understood in the other world; for in this they are frequently cursed.” 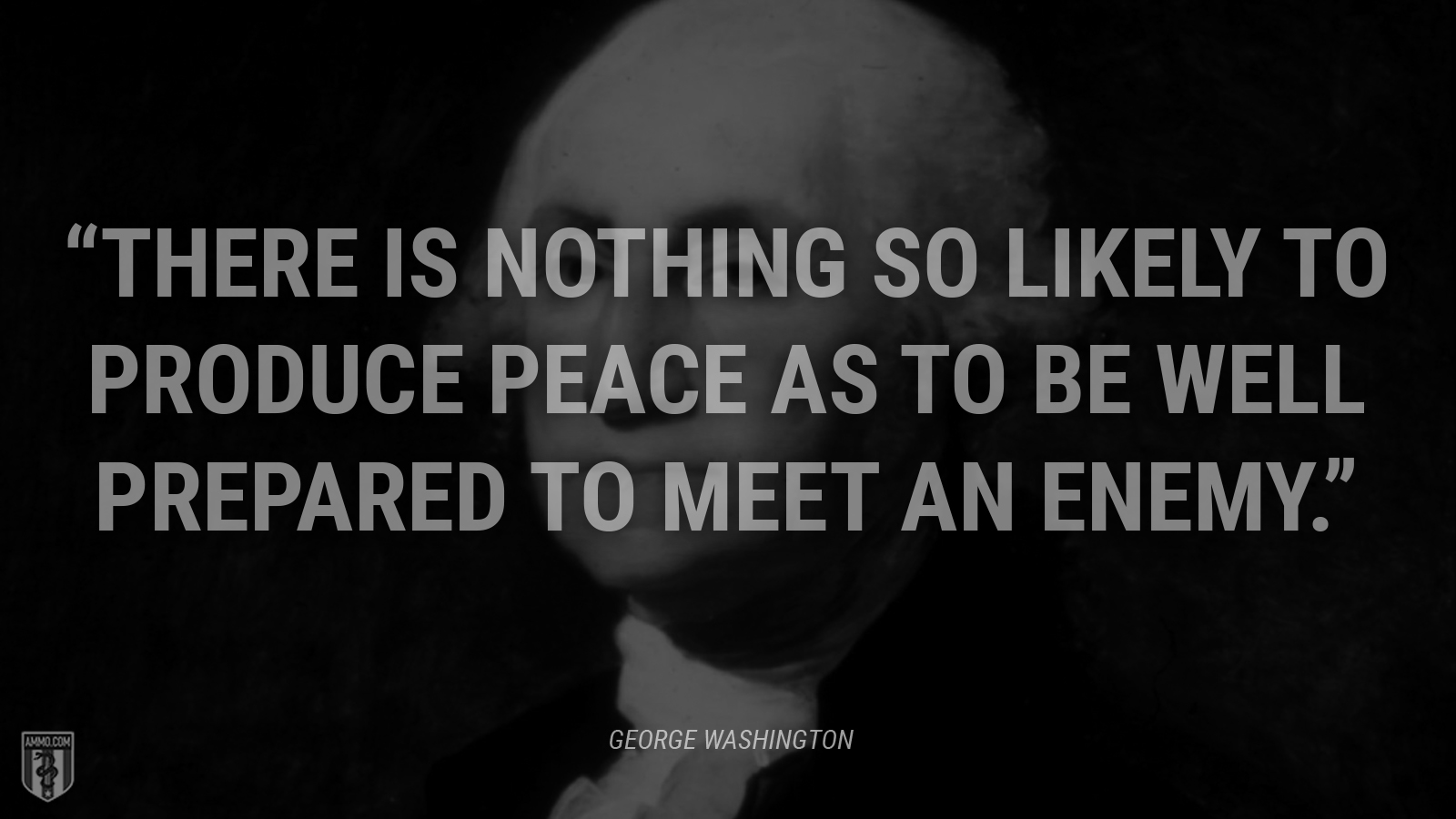 “There is nothing so likely to produce peace as to be well prepared to meet an enemy.” 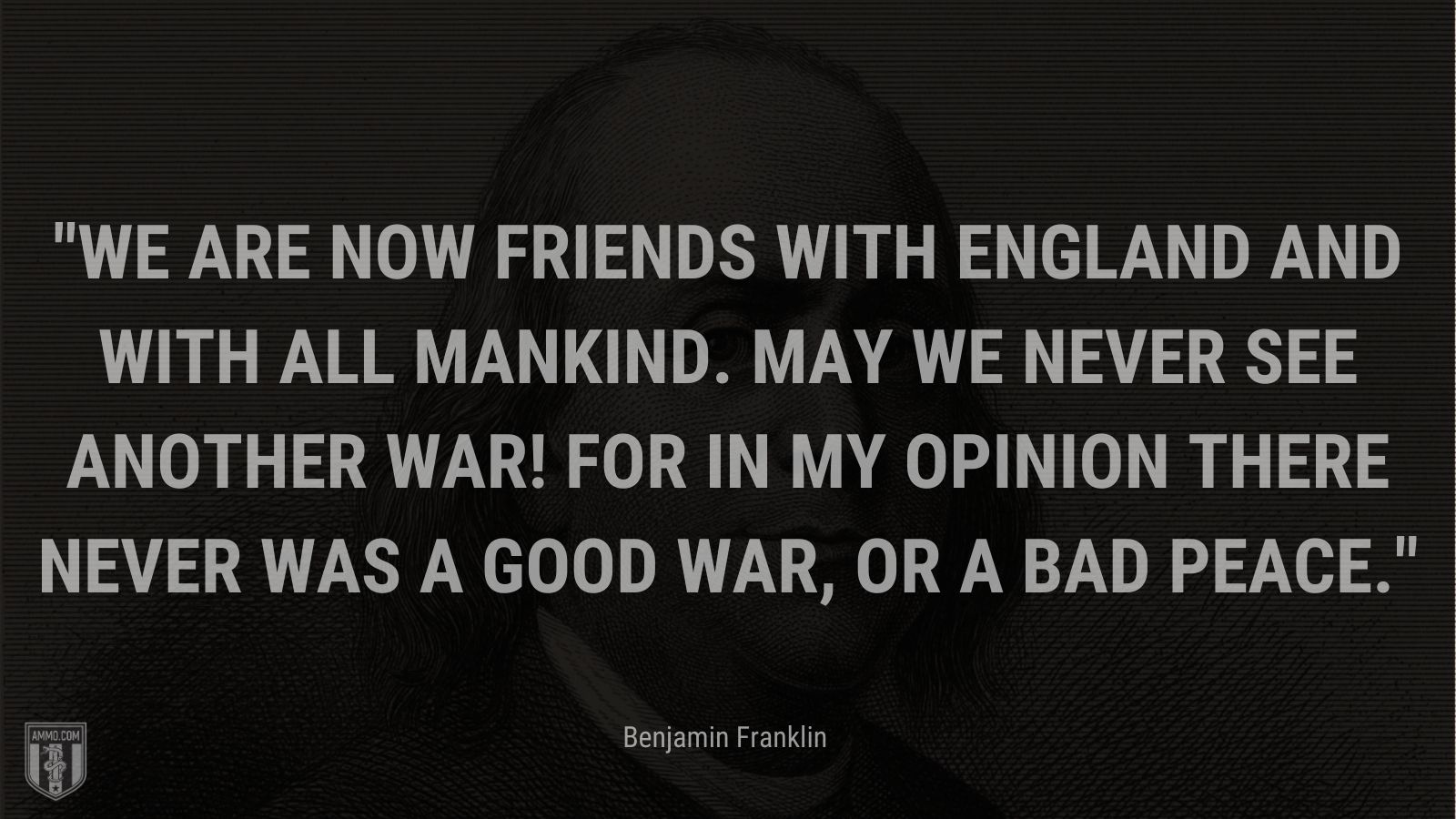 “We are now Friends with England and with all Mankind. May we never see another War! for in my Opinion there never was a good War, or a bad Peace.” 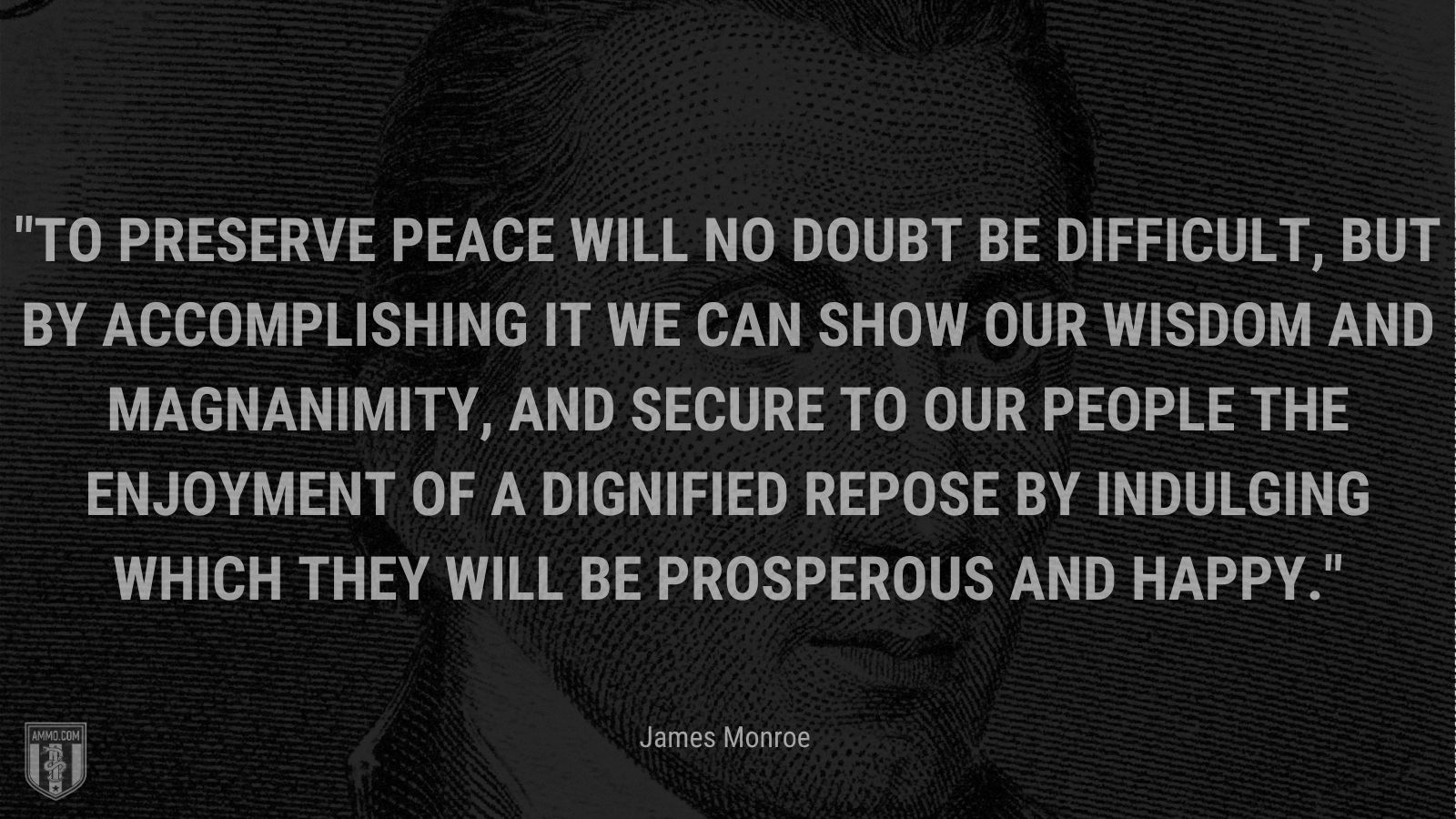 “To preserve peace will no doubt be difficult, but by accomplishing it we can show our wisdom and magnanimity, and secure to our people the enjoyment of a dignified repose by indulging which they will be prosperous and happy.” 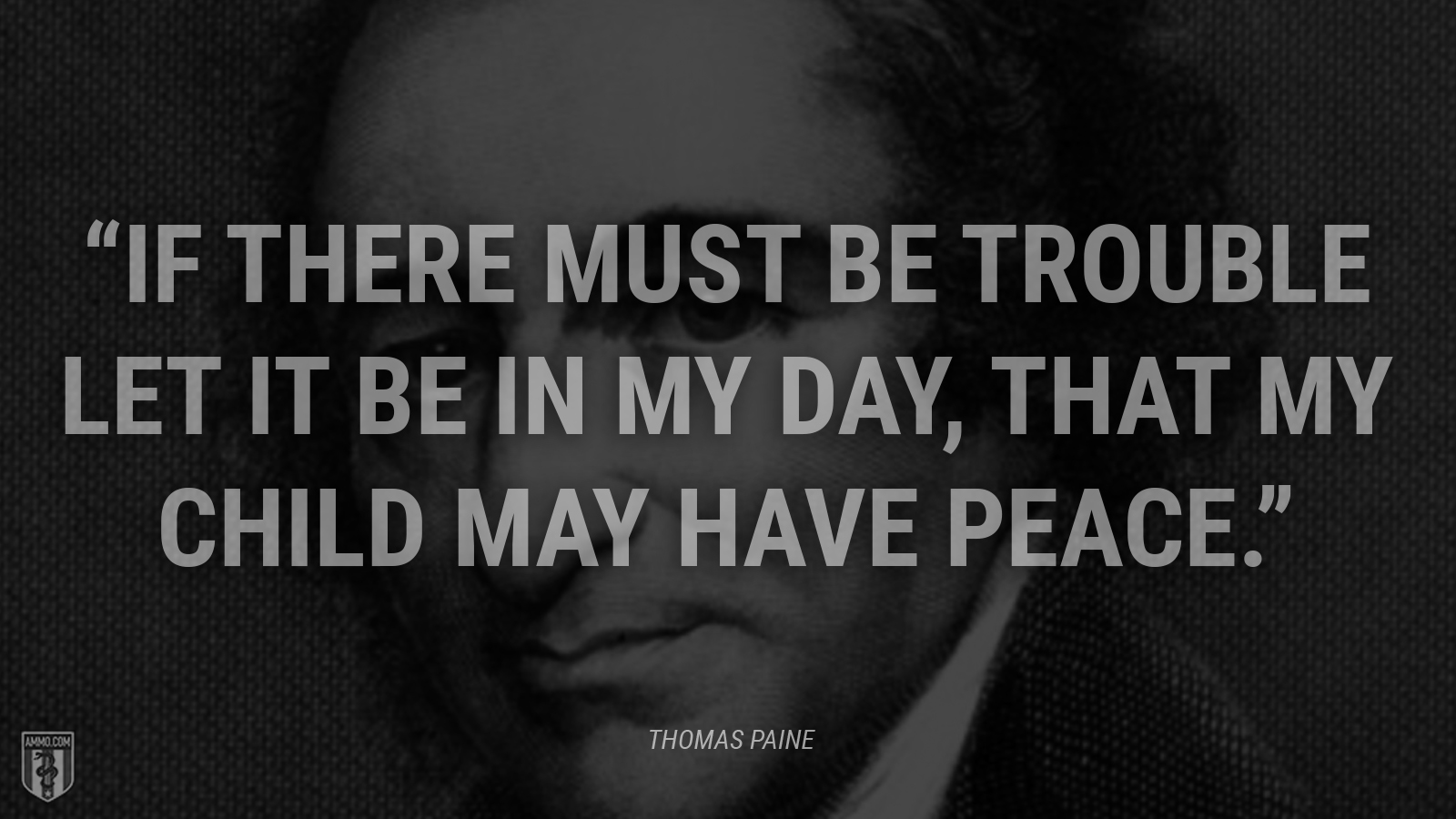 “If there must be trouble let it be in my day, that my child may have peace.” 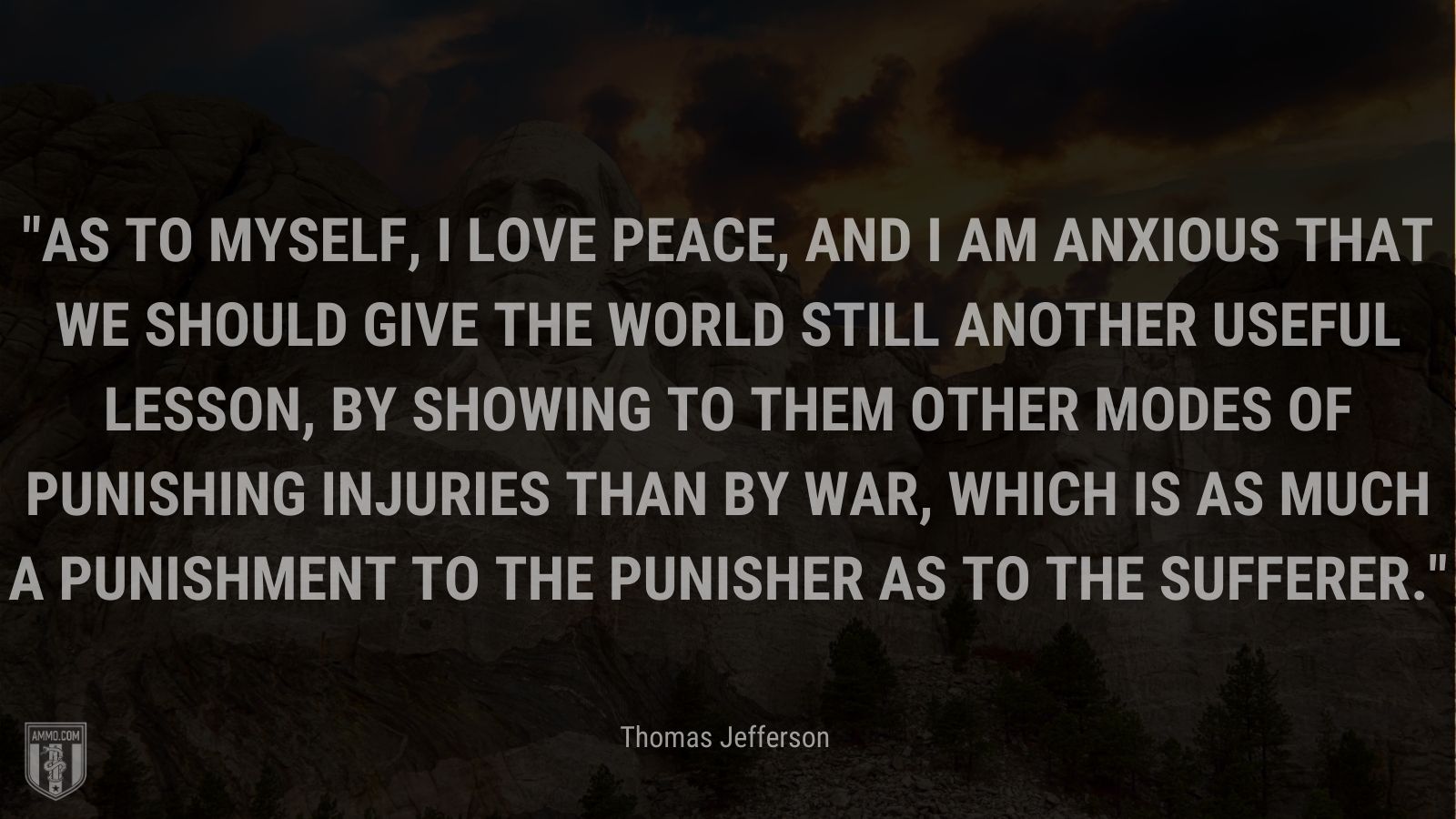 “As to myself, I love peace, and I am anxious that we should give the world still another useful lesson, by showing to them other modes of punishing injuries than by war, which is as much a punishment to the punisher as to the sufferer.” 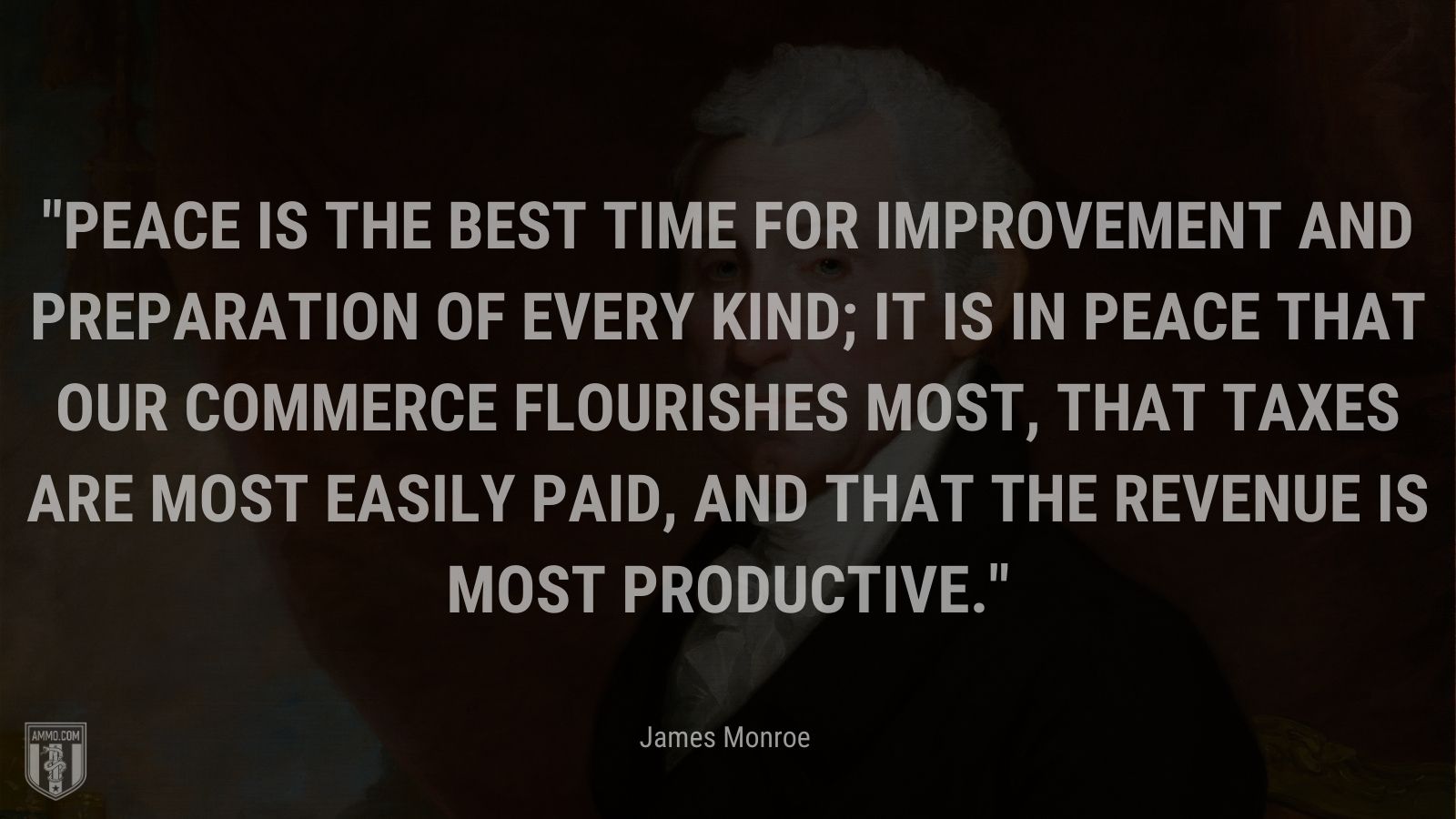 “Peace is the best time for improvement and preparation of every kind; it is in peace that our commerce flourishes most, that taxes are most easily paid, and that the revenue is most productive.” 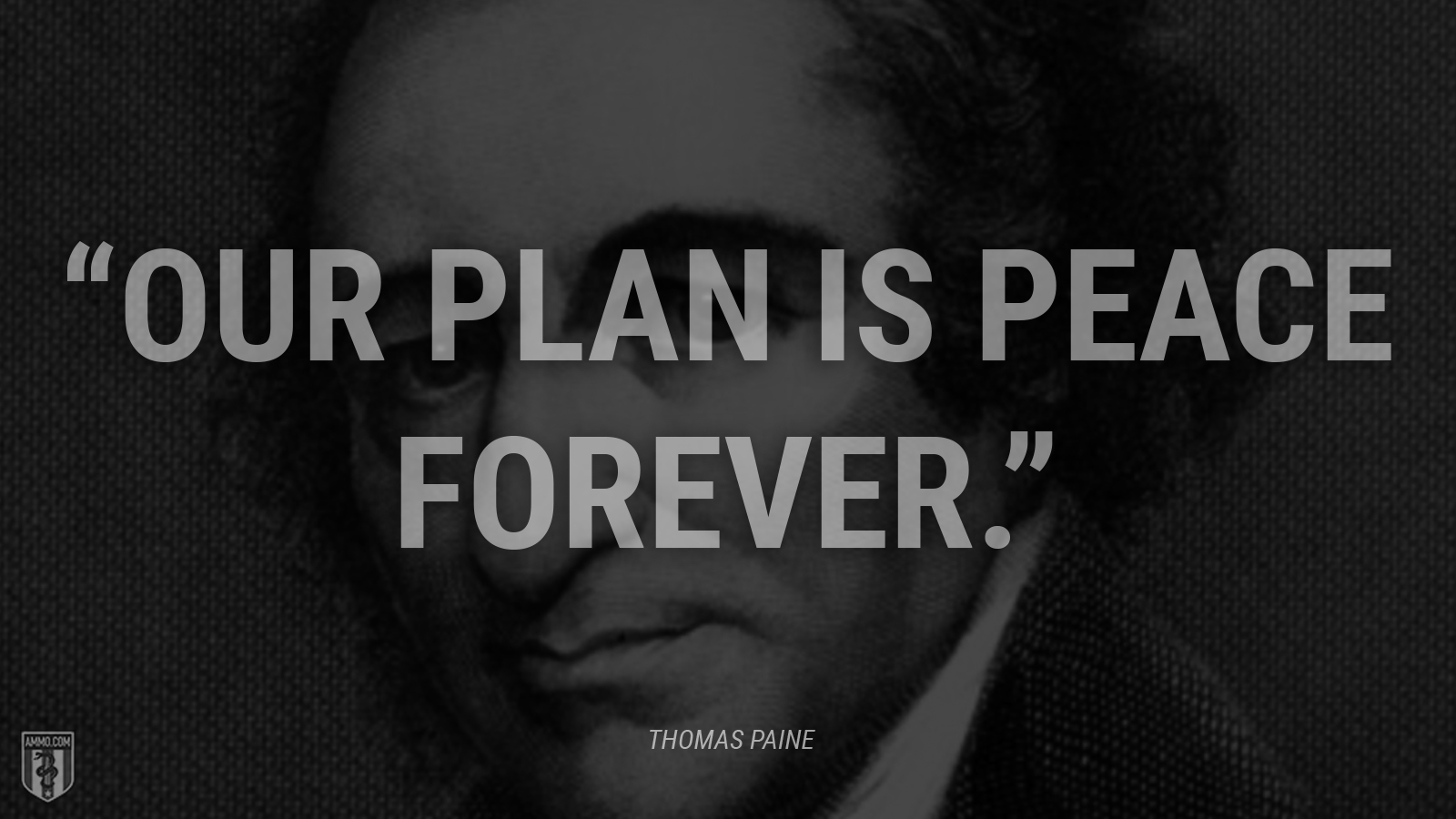 “Our plan is peace forever.”