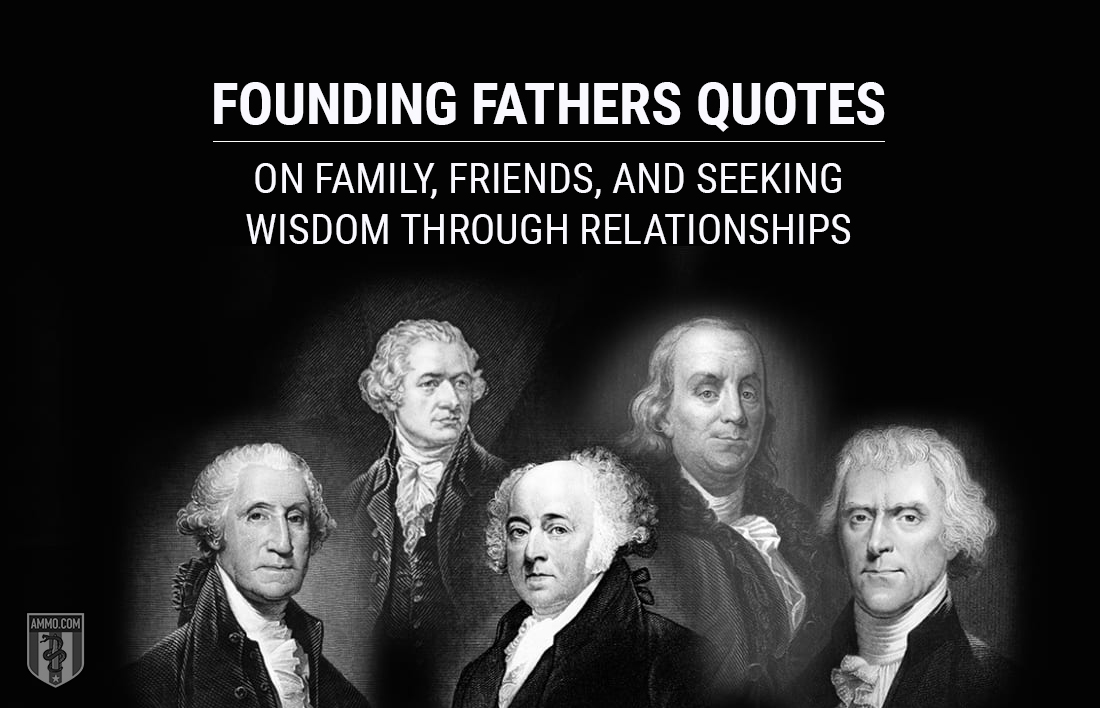 While the art of statecraft was important to the Founders, they had lives outside of creating a nation. Far more important to the Founders were their friends and families. And unsurprisingly, many of the Founders counted themselves as lifelong friends. Even in the example of rivals John Adams and Thomas Jefferson, a mutual respect and lifelong correspondence found the two becoming fast friends. The tales of their enmity are not entirely untrue, but paint an inaccurate picture. Each considered the other to be one of the only men alive who could understand his position in life.

To this end, the Founders have a number of insights into both friendly relations and family life. While not necessarily about political philosophy, they contain valuable wisdom for those seeking to navigate their home and social relations. 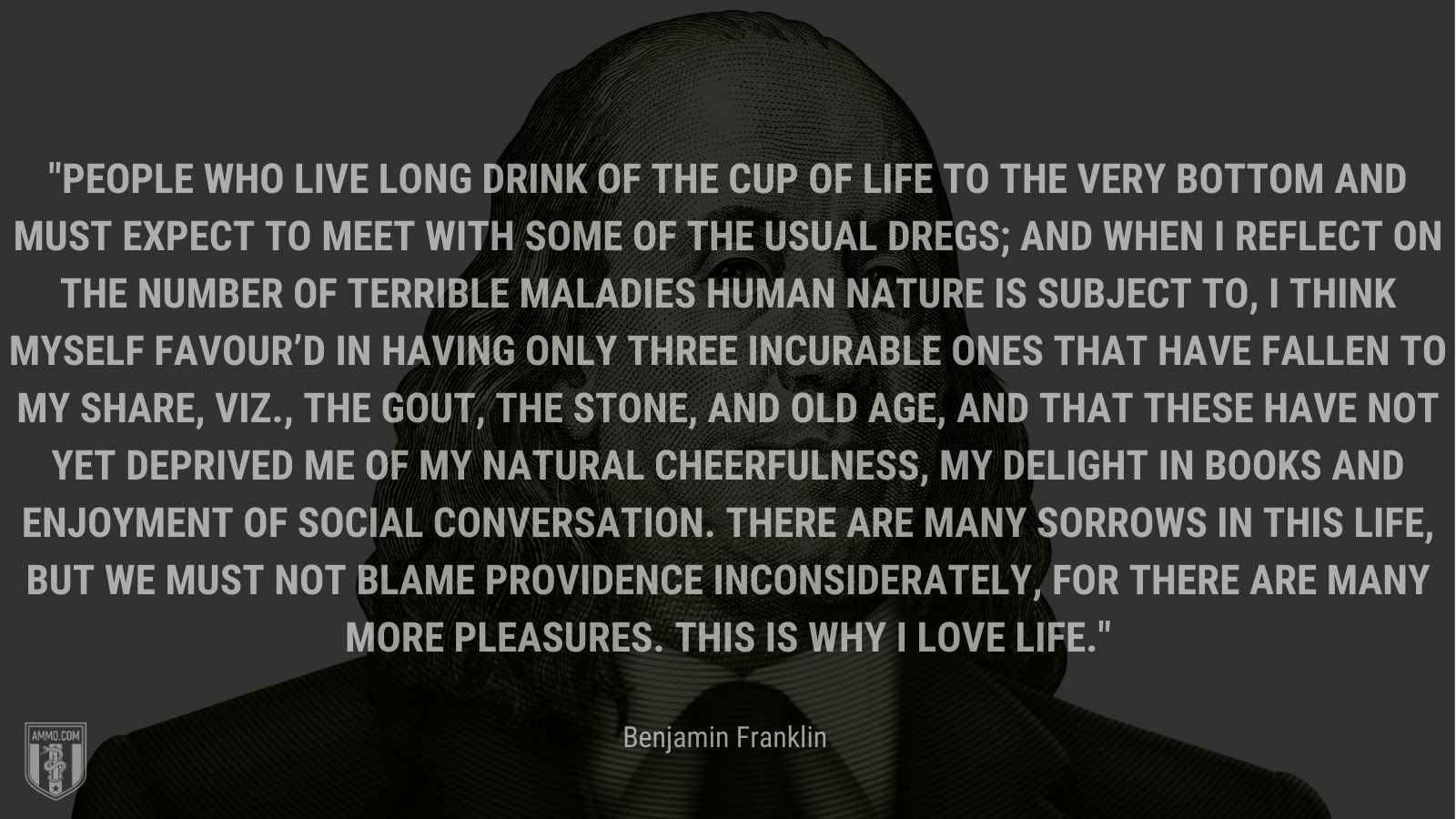 “People who live long drink of the cup of life to the very bottom and must expect to meet with some of the usual dregs; and when I reflect on the number of terrible maladies human nature is subject to, I think myself favour’d in having only three incurable ones that have fallen to my share, viz., the gout, the stone, and old age, and that these have not yet deprived me of my natural cheerfulness, my delight in books and enjoyment of social conversation. There are many sorrows in this life, but we must not blame Providence inconsiderately, for there are many more pleasures. This is why I love life.” 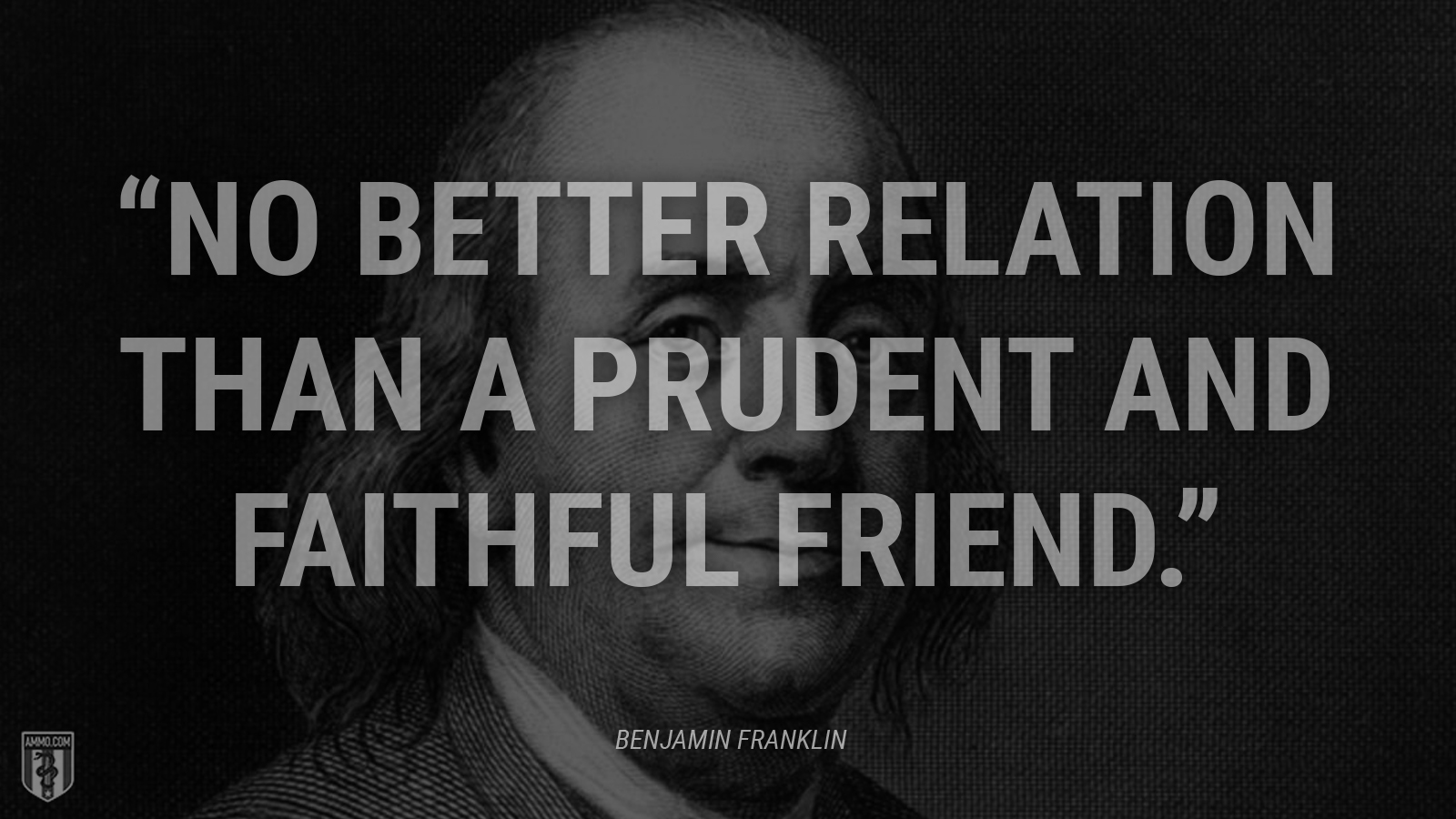 “No better relation than a prudent and faithful Friend.” 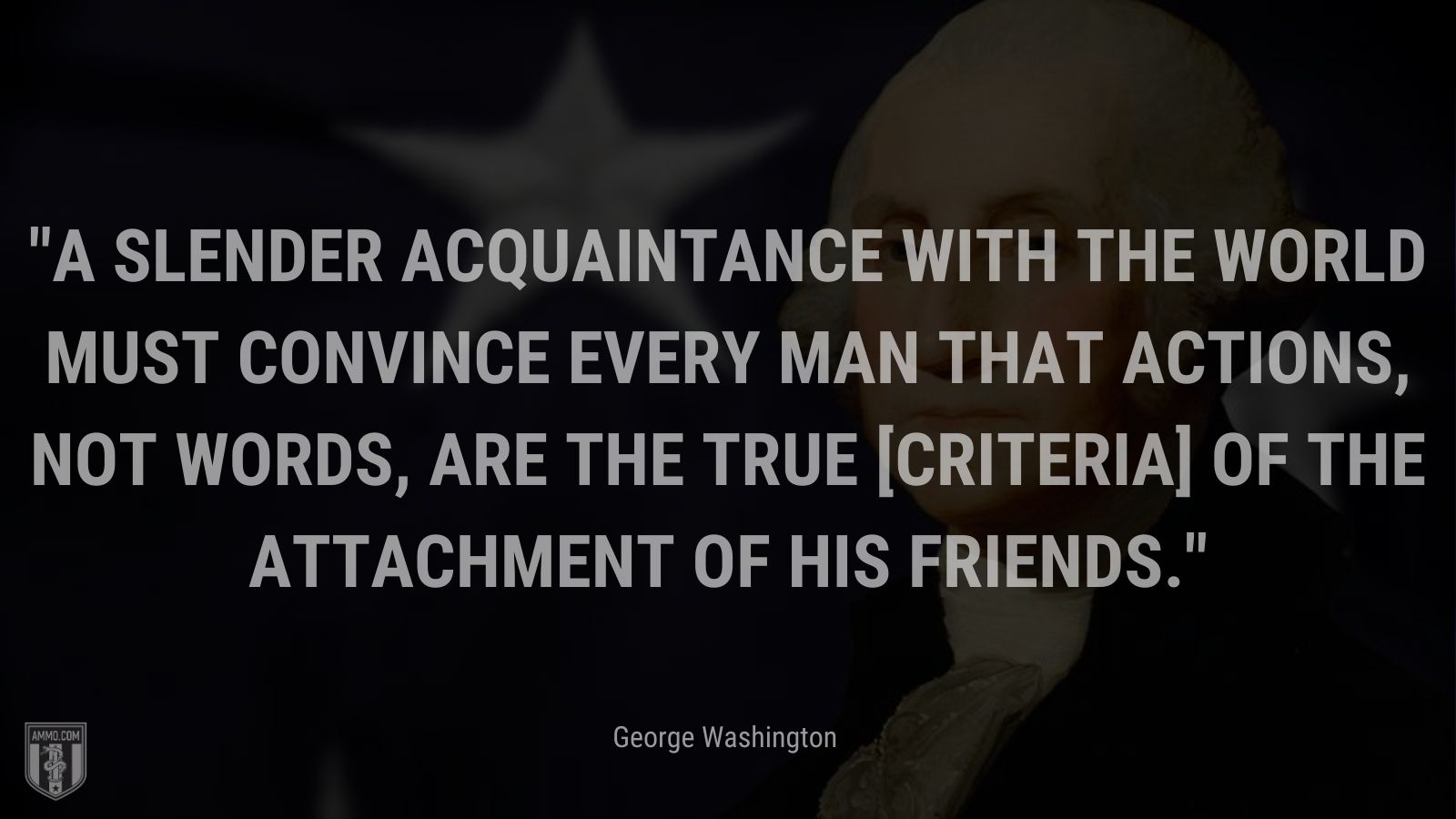 “A slender acquaintance with the world must convince every man that actions, not words, are the true [criteria] of the attachment of his friends.” 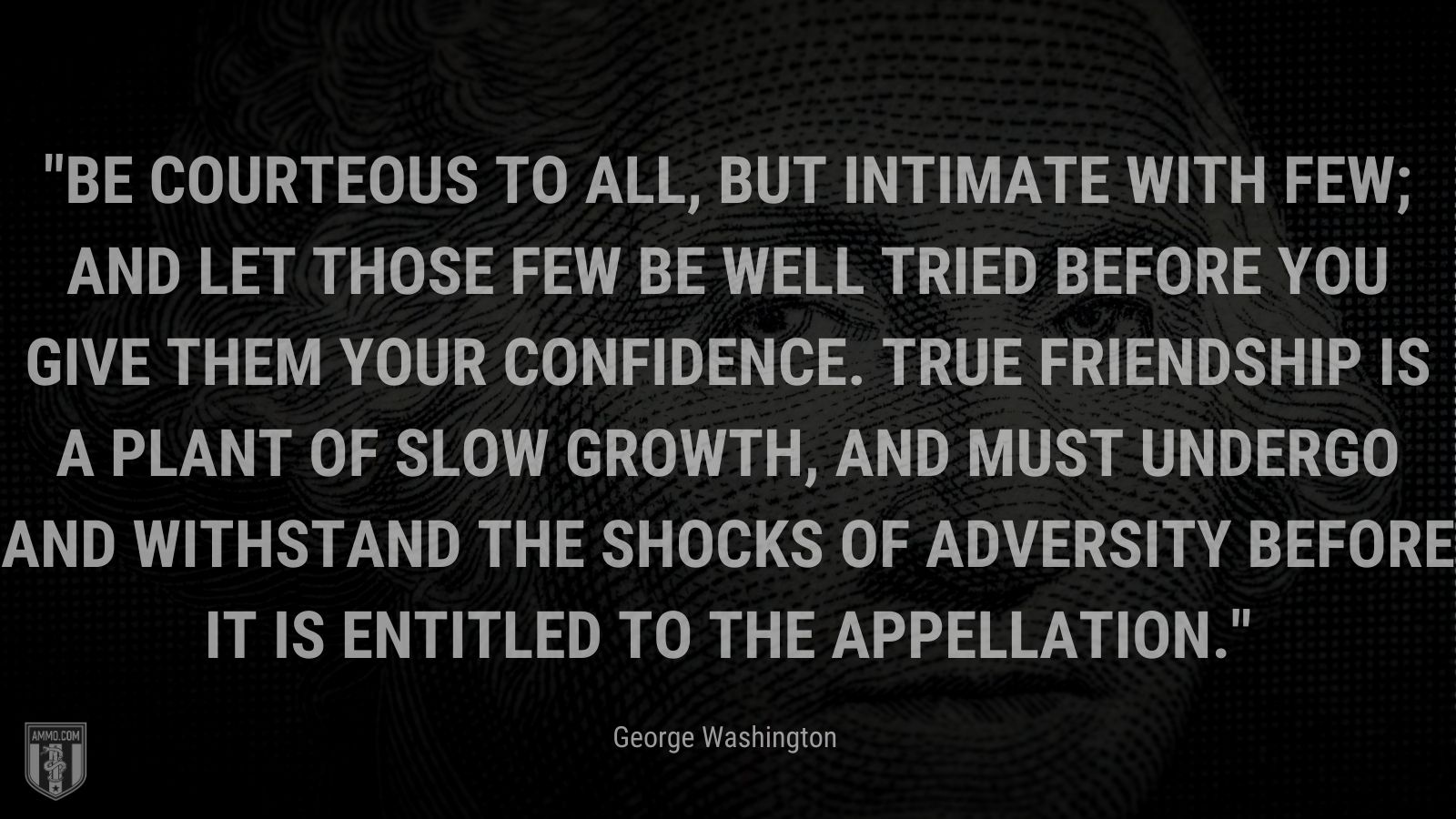 “Be courteous to all, but intimate with few; and let those few be well tried before you give them your confidence. True friendship is a plant of slow growth, and must undergo and withstand the shocks of adversity before it is entitled to the appellation.” 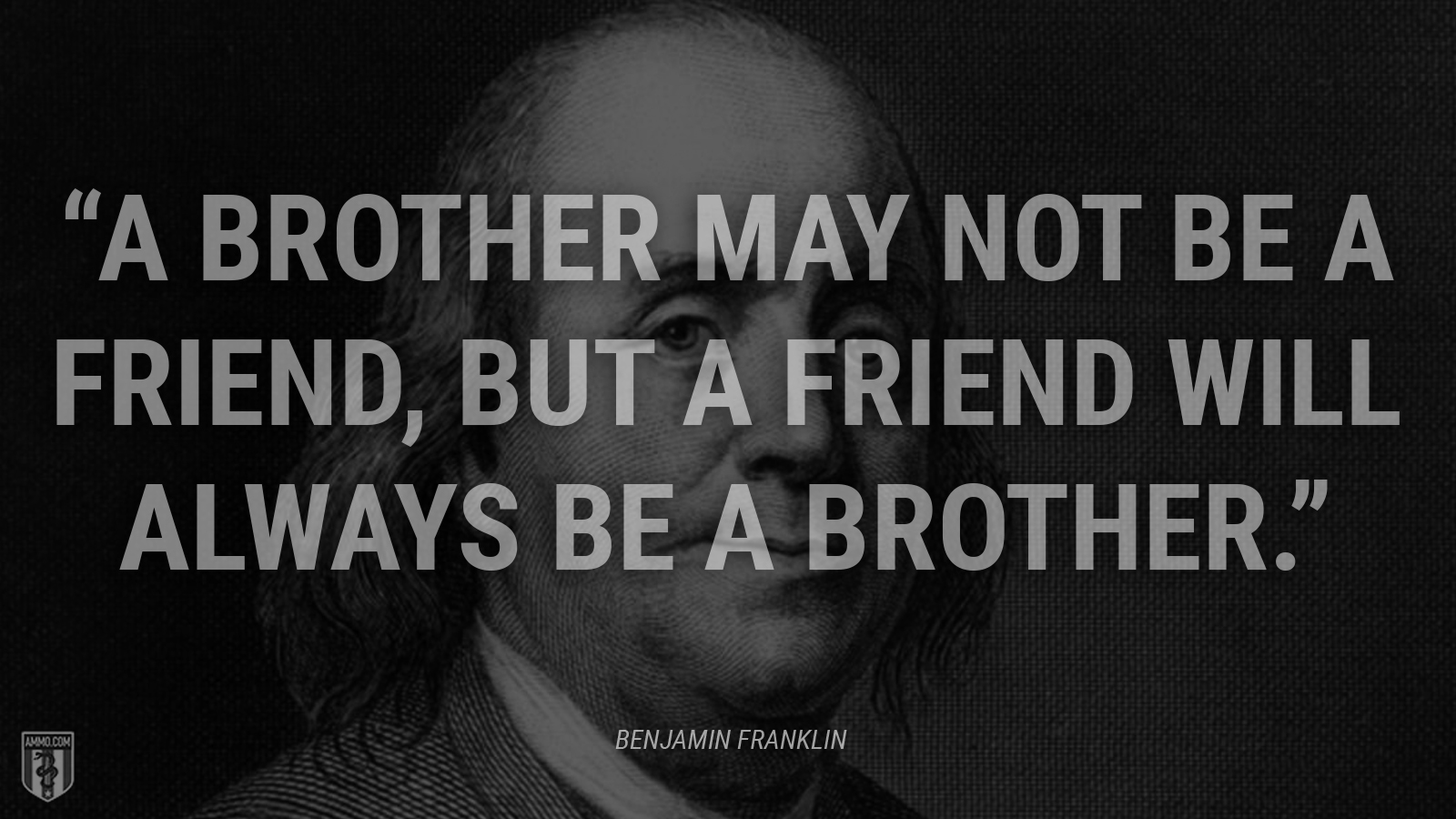 “A Brother may not be a Friend, but a Friend will always be a Brother.” 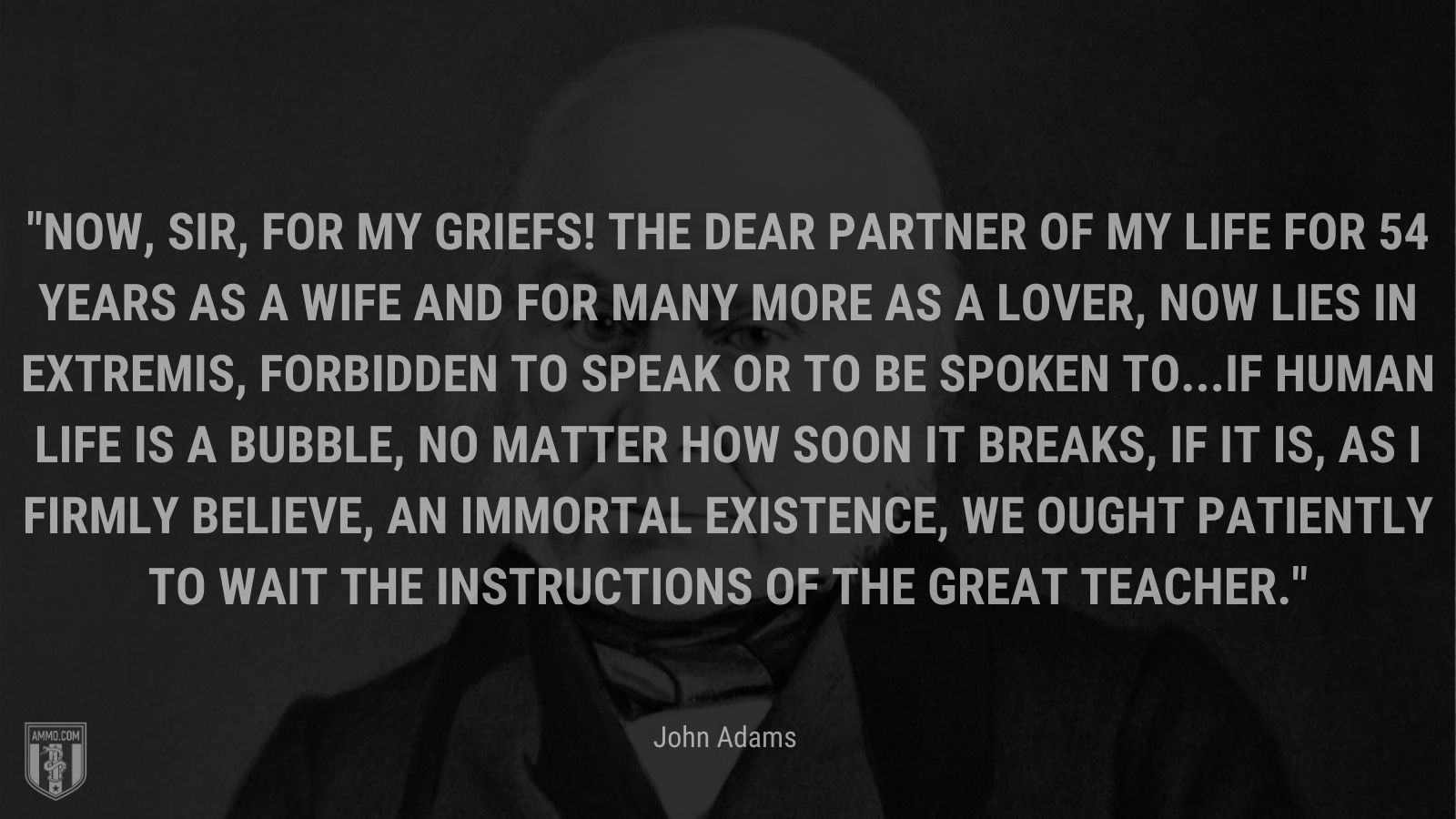 “Now, sir, for my griefs! The dear partner of my life for 54 years as a wife and for many more as a lover, now lies in extremis, forbidden to speak or to be spoken to...If human life is a bubble, no matter how soon it breaks, if it is, as I firmly believe, an immortal existence, we ought patiently to wait the instructions of the great Teacher.” 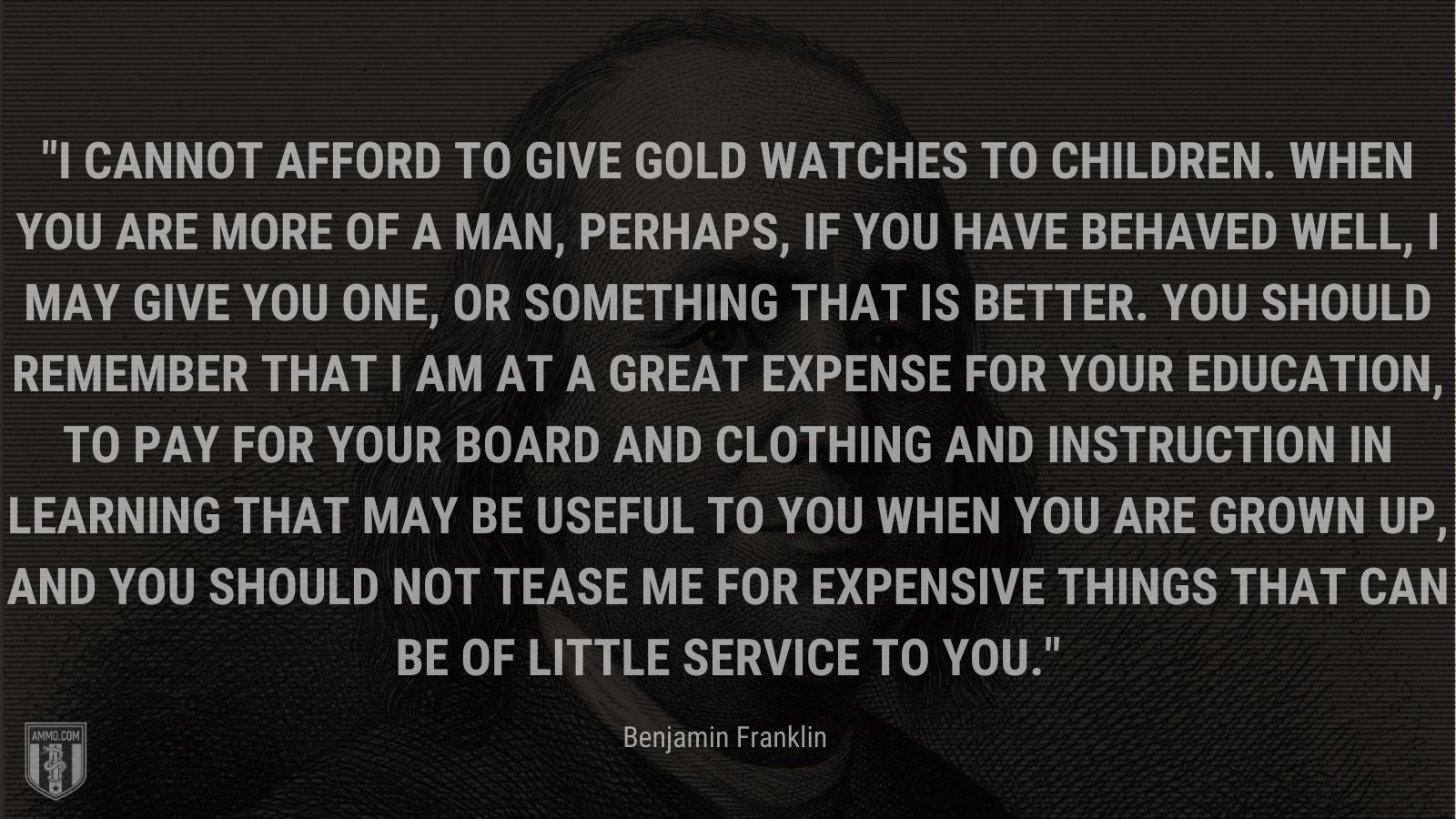 “I cannot afford to give gold watches to children. When you are more of a man, perhaps, if you have behaved well, I may give you one, or something that is better. You should remember that I am at a great expense for your education, to pay for your board and clothing and instruction in learning that may be useful to you when you are grown up, and you should not tease me for expensive things that can be of little service to you.” 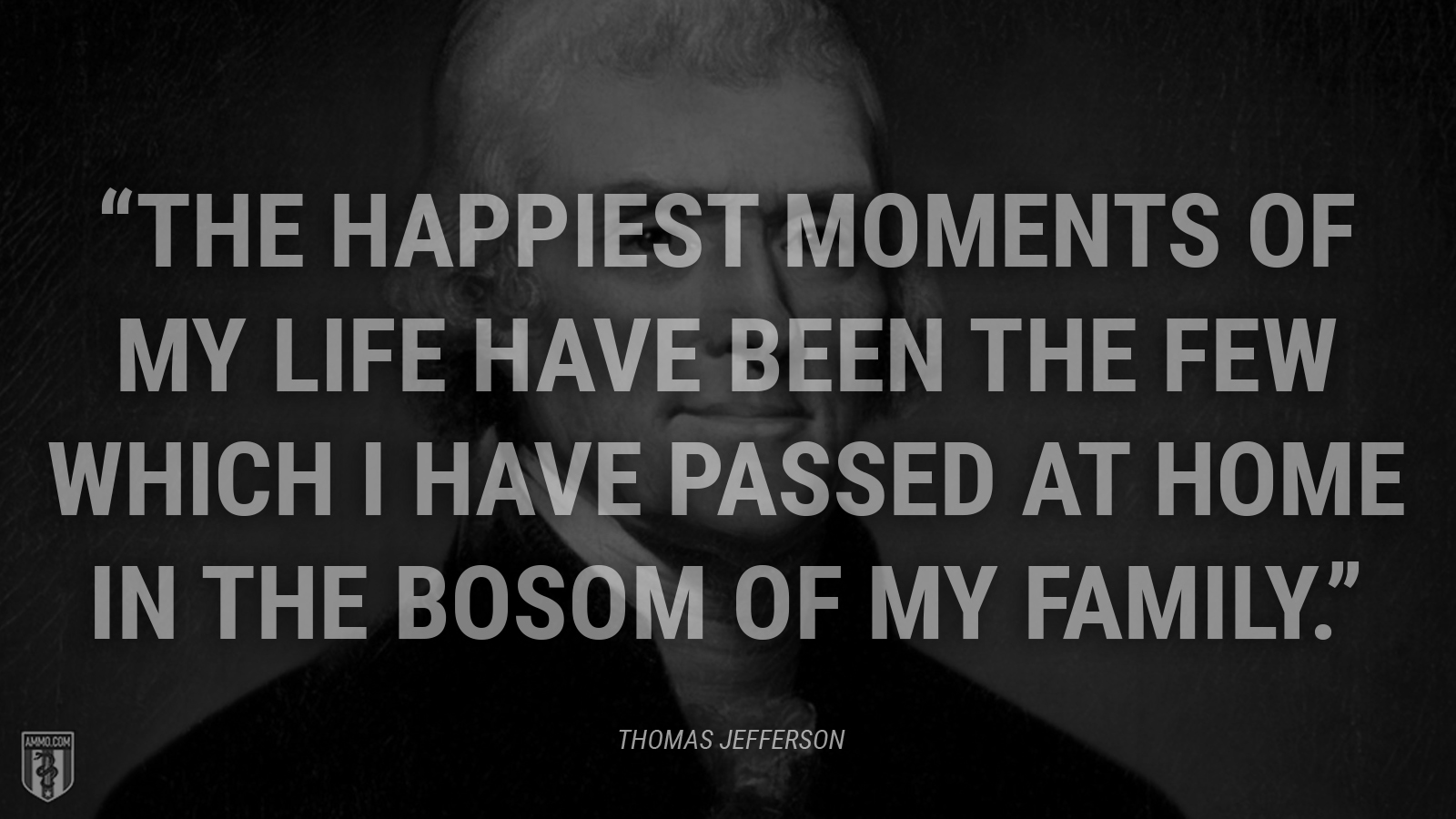 “The happiest moments of my life have been the few which I have passed at home in the bosom of my family.” 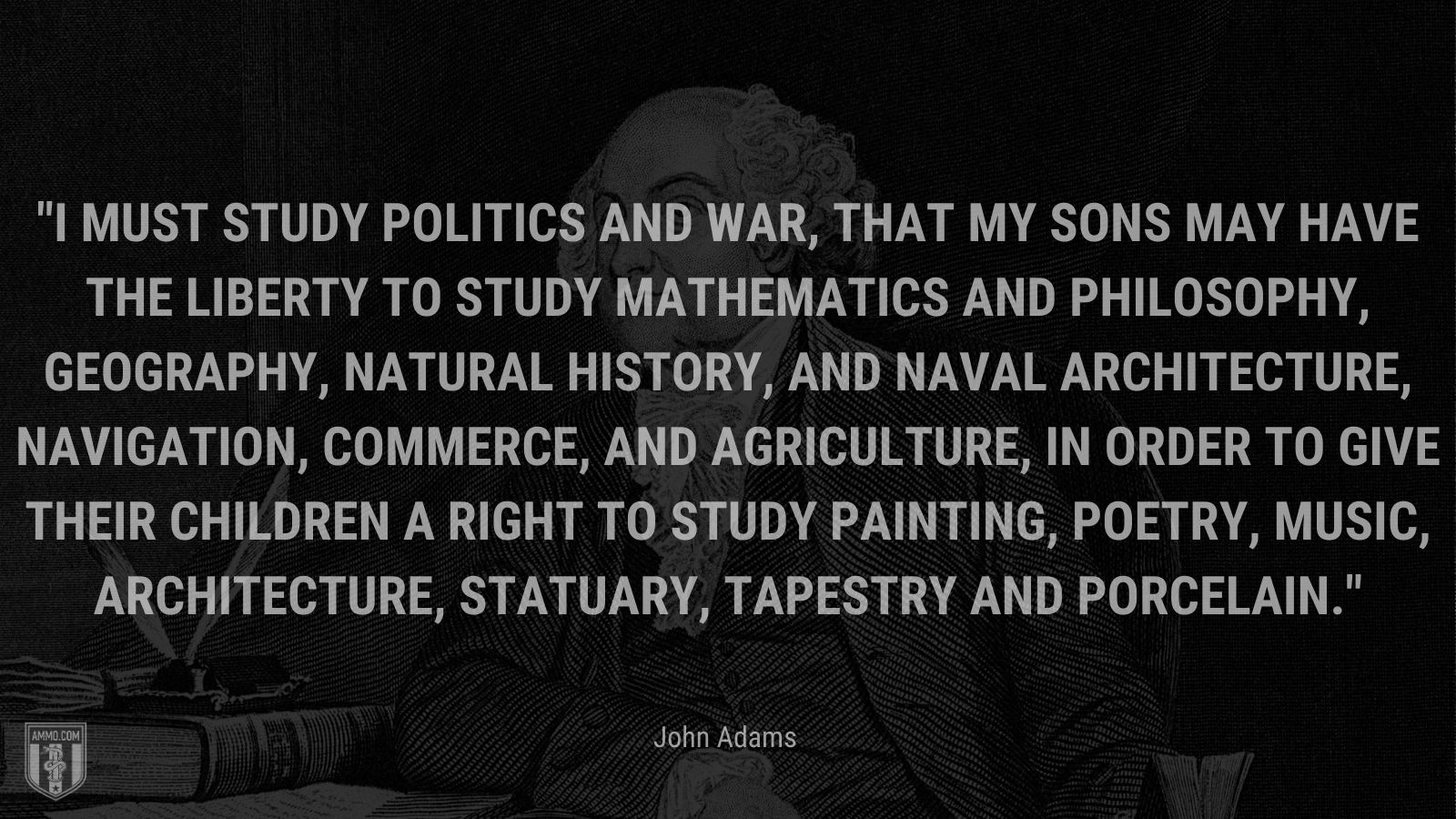 “I must study politics and war, that my sons may have the liberty to study mathematics and philosophy, geography, natural history, and naval architecture, navigation, commerce, and agriculture, in order to give their children a right to study painting, poetry, music, architecture, statuary, tapestry and porcelain.” 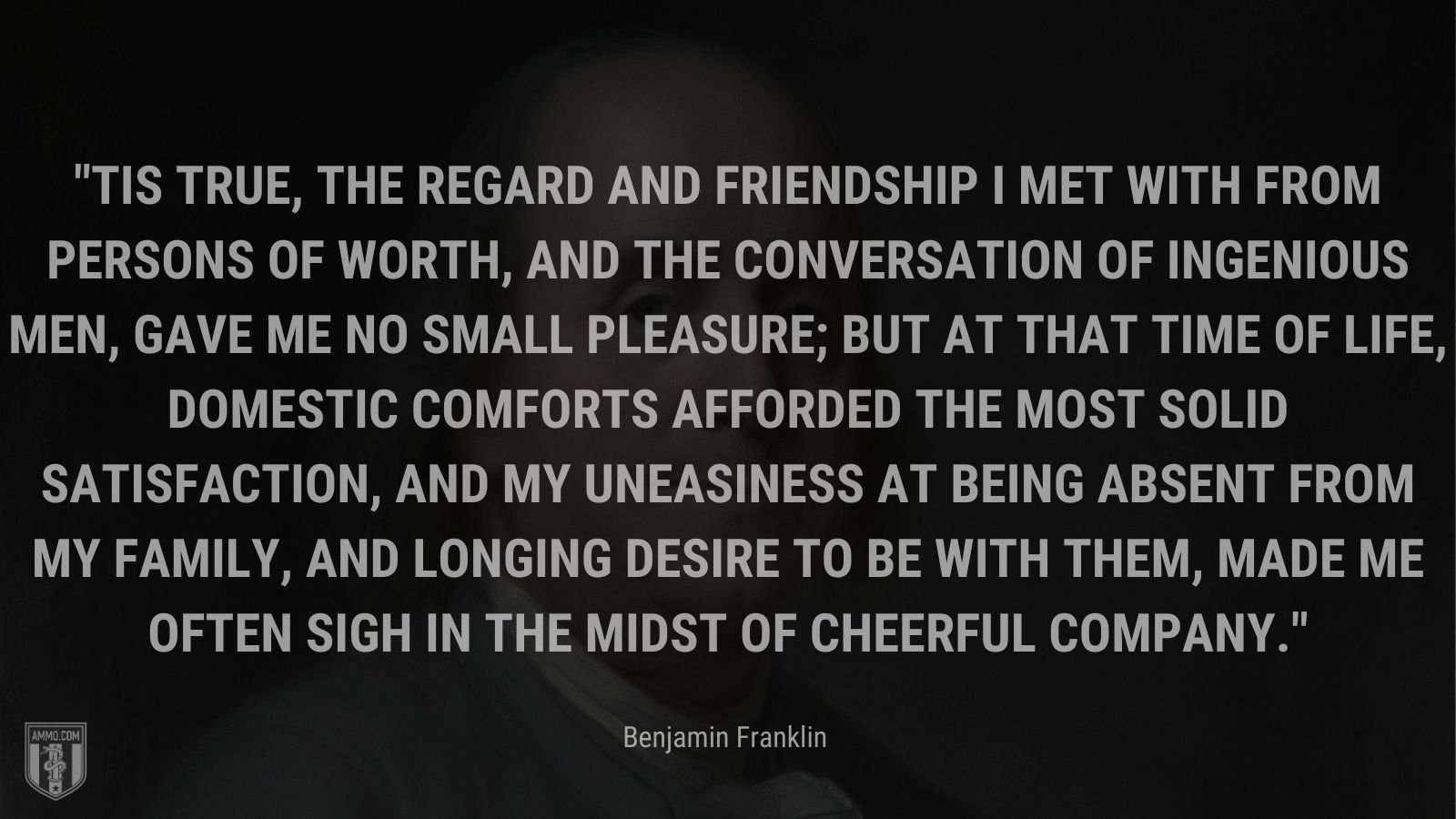 “’Tis true, the regard and friendship I met with from persons of worth, and the conversation of ingenious men, gave me no small pleasure; but at that time of life, domestic comforts afforded the most solid satisfaction, and my uneasiness at being absent from my family, and longing desire to be with them, made me often sigh in the midst of cheerful company.” 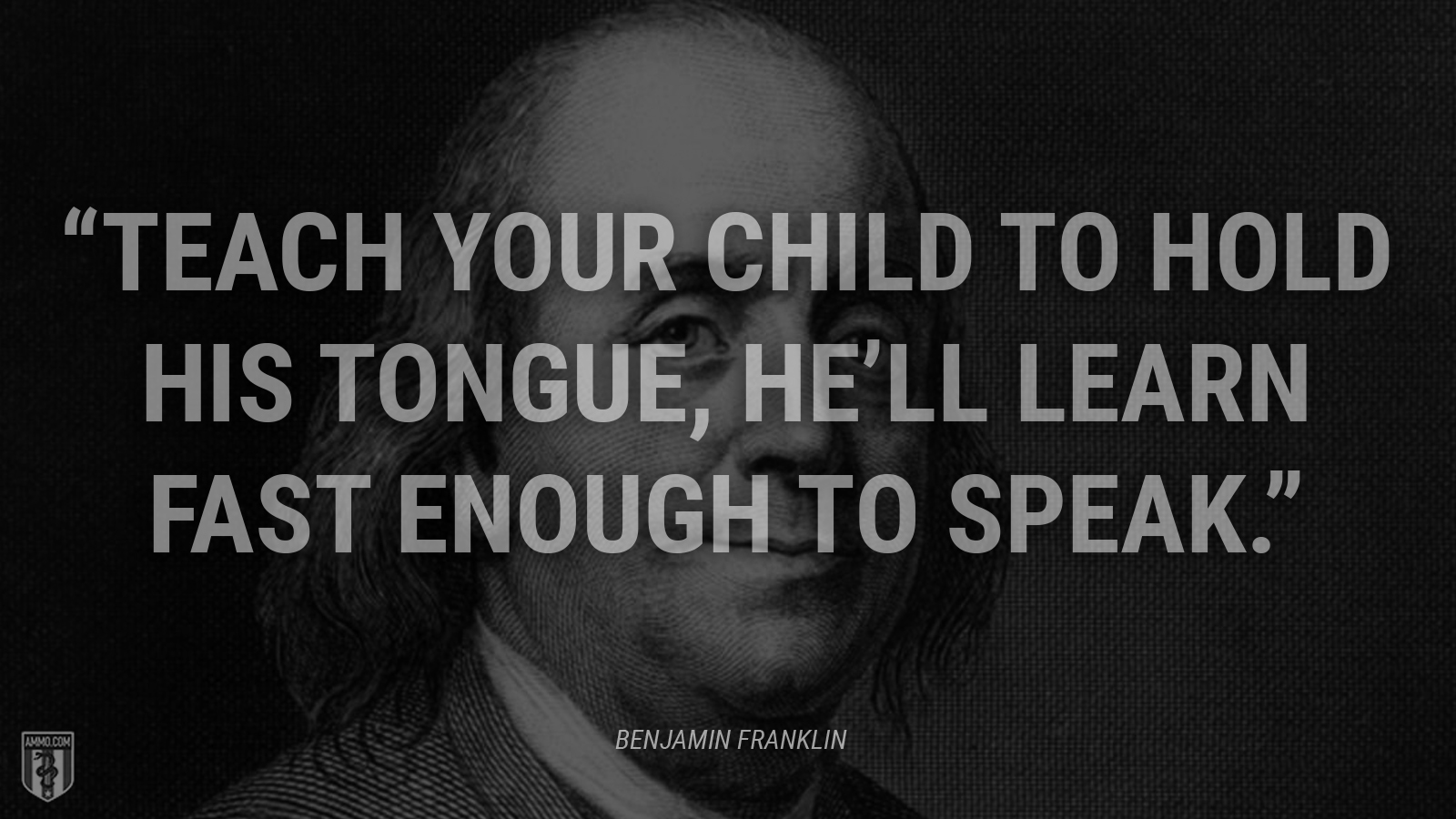 “Teach your child to hold his tongue, he’ll learn fast enough to speak.” 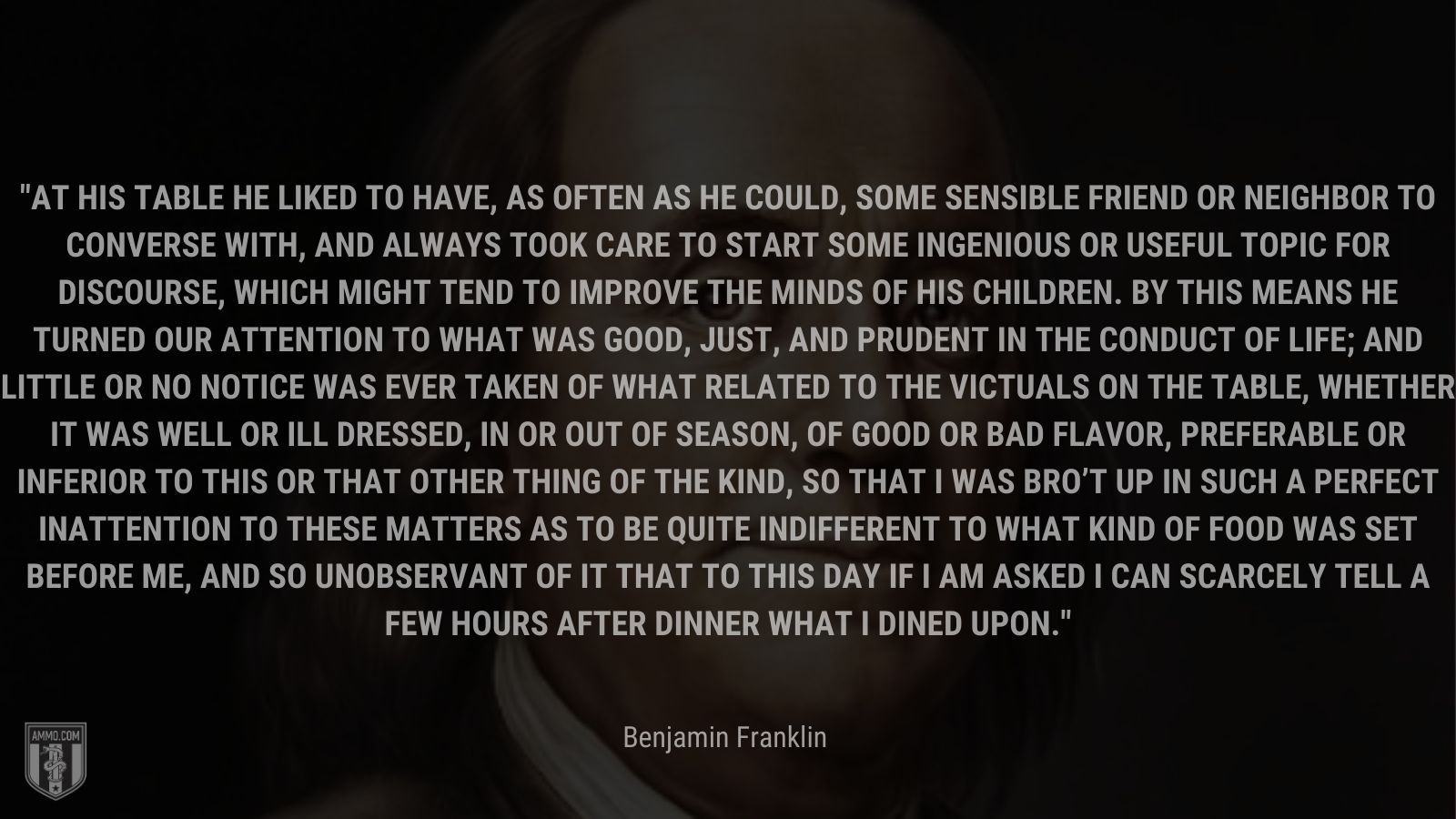 “At his table he liked to have, as often as he could, some sensible friend or neighbor to converse with, and always took care to start some ingenious or useful topic for discourse, which might tend to improve the minds of his children. By this means he turned our attention to what was good, just, and prudent in the conduct of life; and little or no notice was ever taken of what related to the victuals on the table, whether it was well or ill dressed, in or out of season, of good or bad flavor, preferable or inferior to this or that other thing of the kind, so that I was bro’t up in such a perfect inattention to these matters as to be quite indifferent to what kind of food was set before me, and so unobservant of it that to this day if I am asked I can scarcely tell a few hours after dinner what I dined upon.” 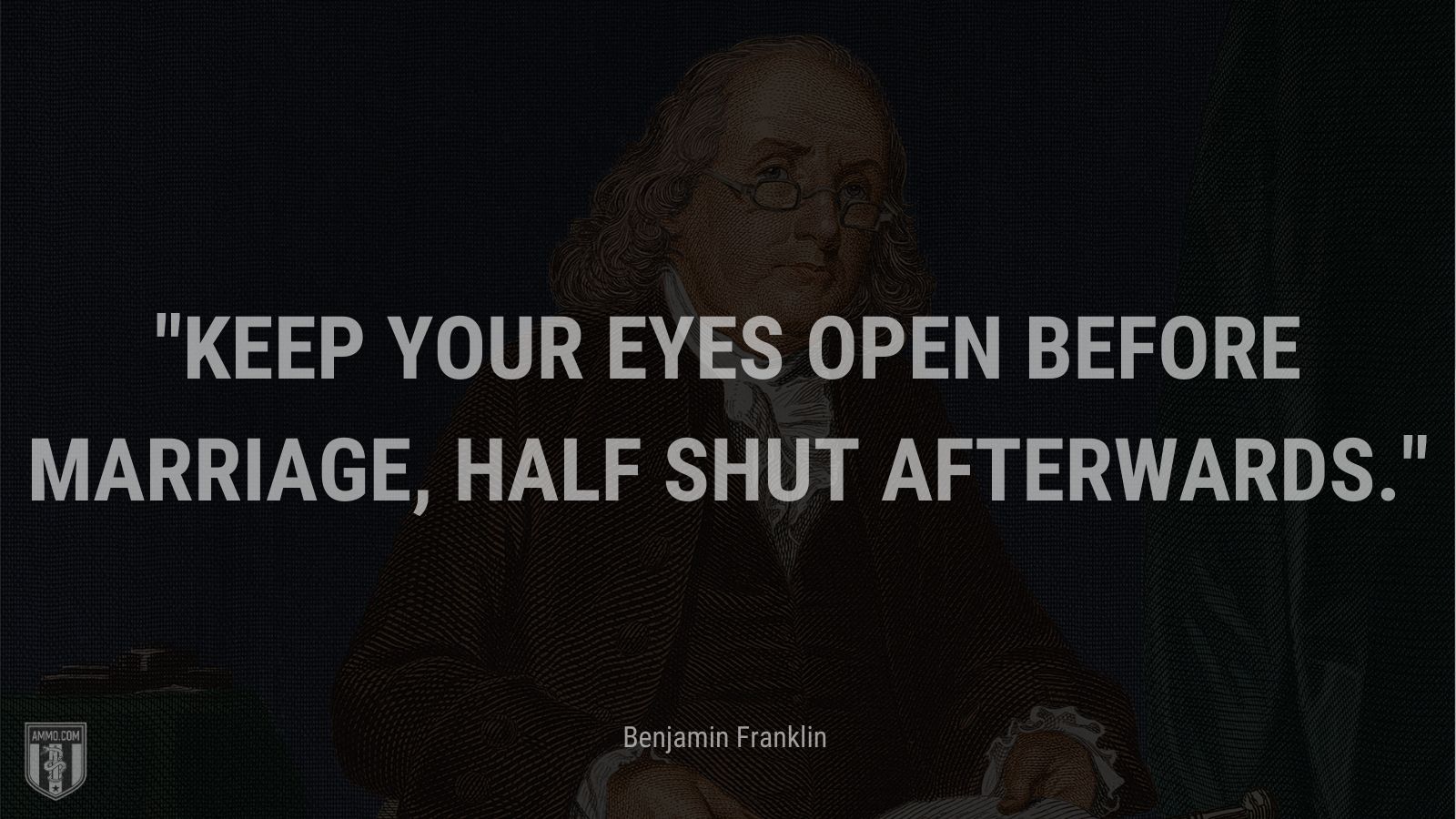 “Keep your eyes open before marriage, half shut afterwards.” 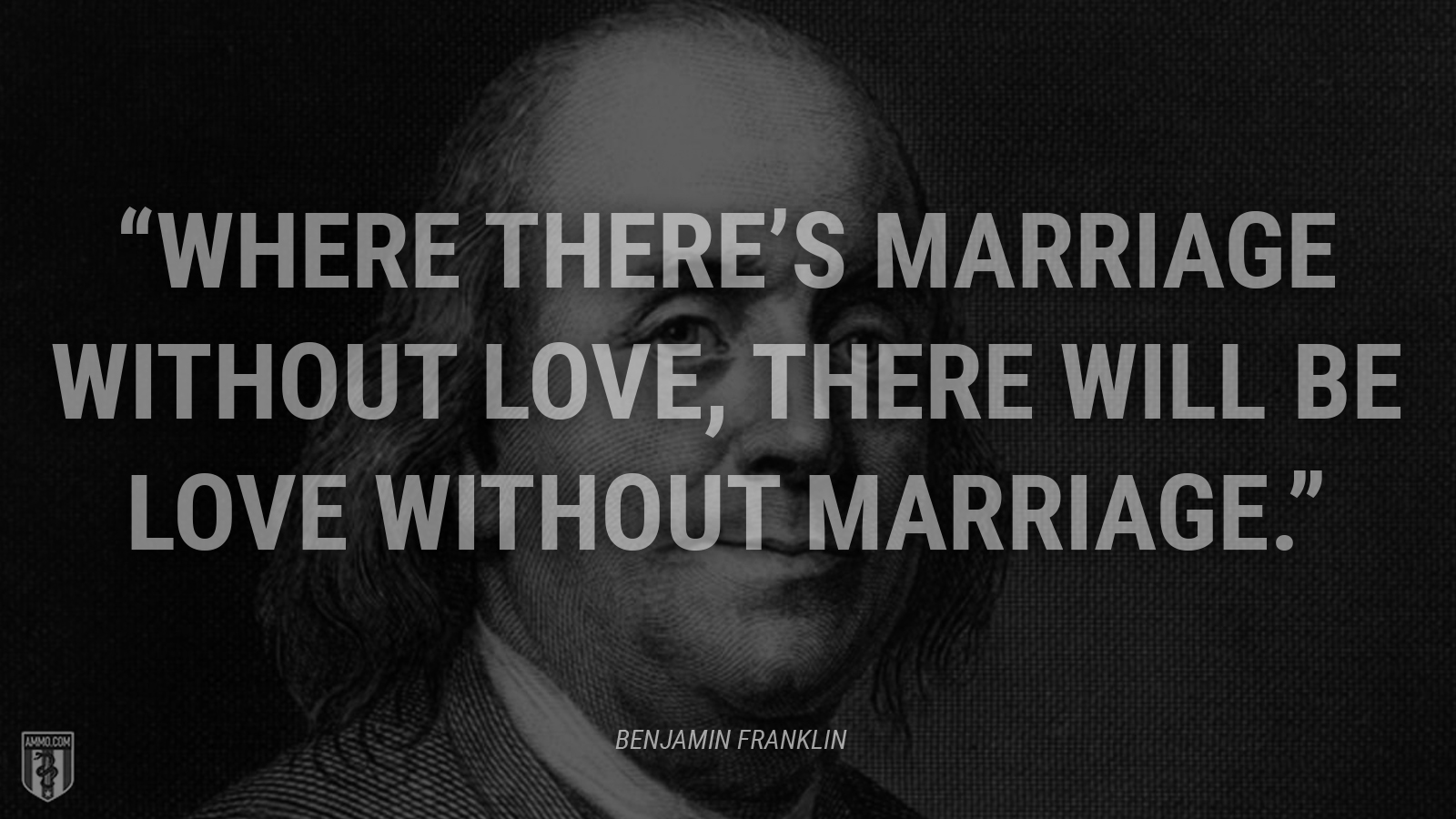 “Where there’s marriage without love, there will be love without marriage.” 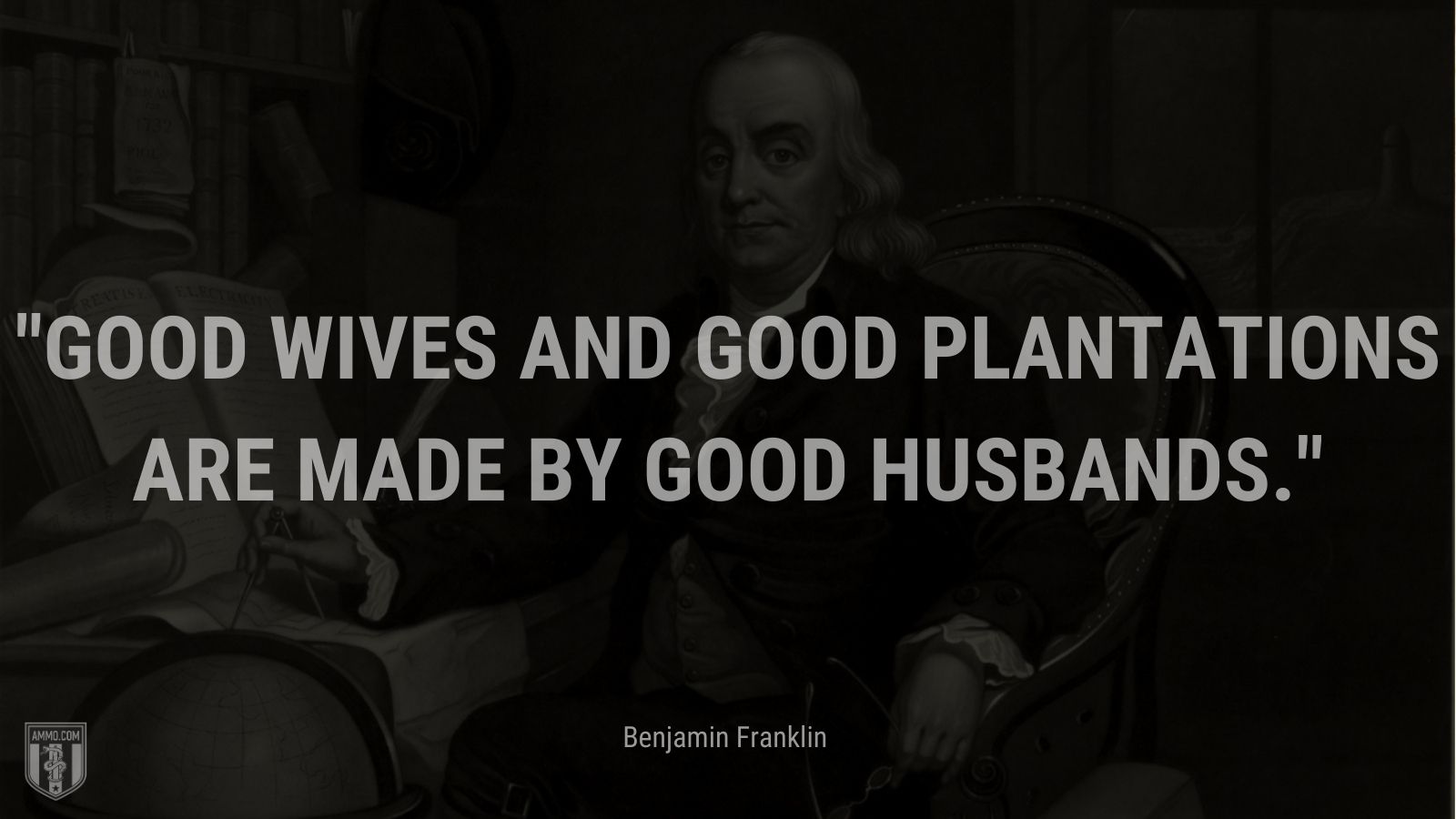 “Good wives and good plantations are made by good husbands.”