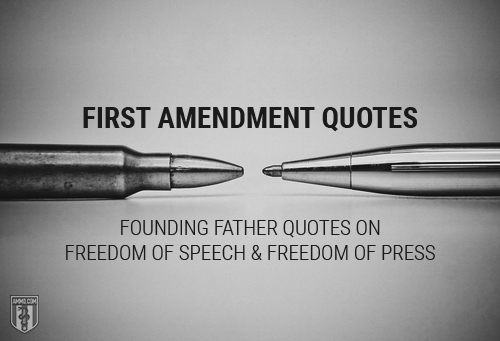 The First Amendment prohibits the federal government from passing laws restricting freedom of speech and abridging freedom of the press. Of all the clauses in the Bill of Rights, this is the one most deeply ingrained as an overall part of American culture, regardless of its impact on the law. Indeed, if one were to ask almost anyone what right is most important to them as an American, the Freedom of Speech would probably top the list.

The United States is anomalous in allowing for incredible leeway with regard to both Freedom of Speech and Freedom of the Press. This is why, for example, the works of noted conspiracy theorist David Icke, known for stating that the British Royal Family among others are shape-shifting, bloodsucking reptiles, can be published in the United States but not in the United Kingdom. There is an extremely high bar for what is legally actionable speech in the United States. Among other things, America is one of the only countries without hate speech laws.

On Freedom of Speech 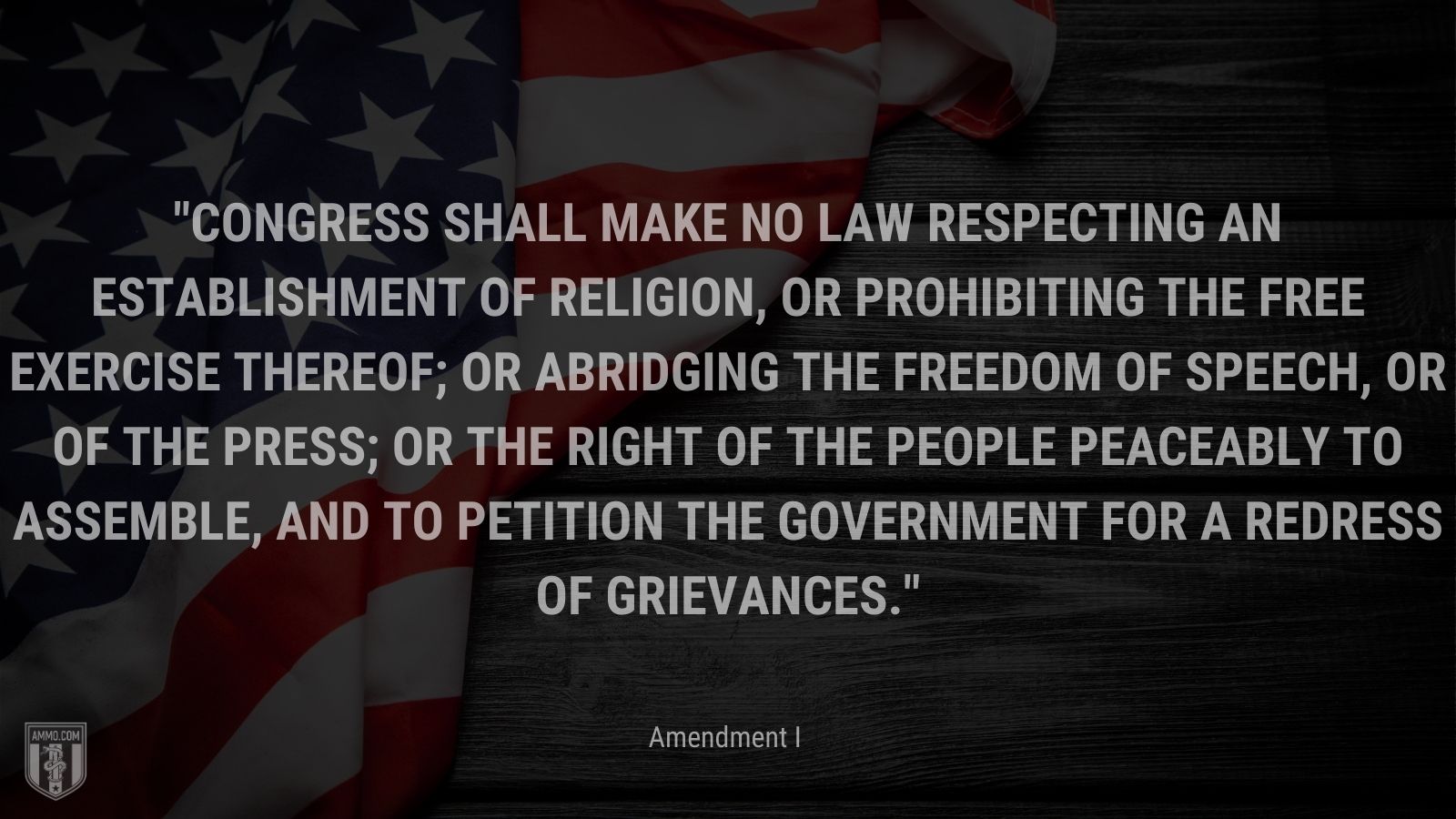 “Congress shall make no law respecting an establishment of religion, or prohibiting the free exercise thereof; or abridging the freedom of speech, or of the press; or the right of the people peaceably to assemble, and to petition the Government for a redress of grievances.” 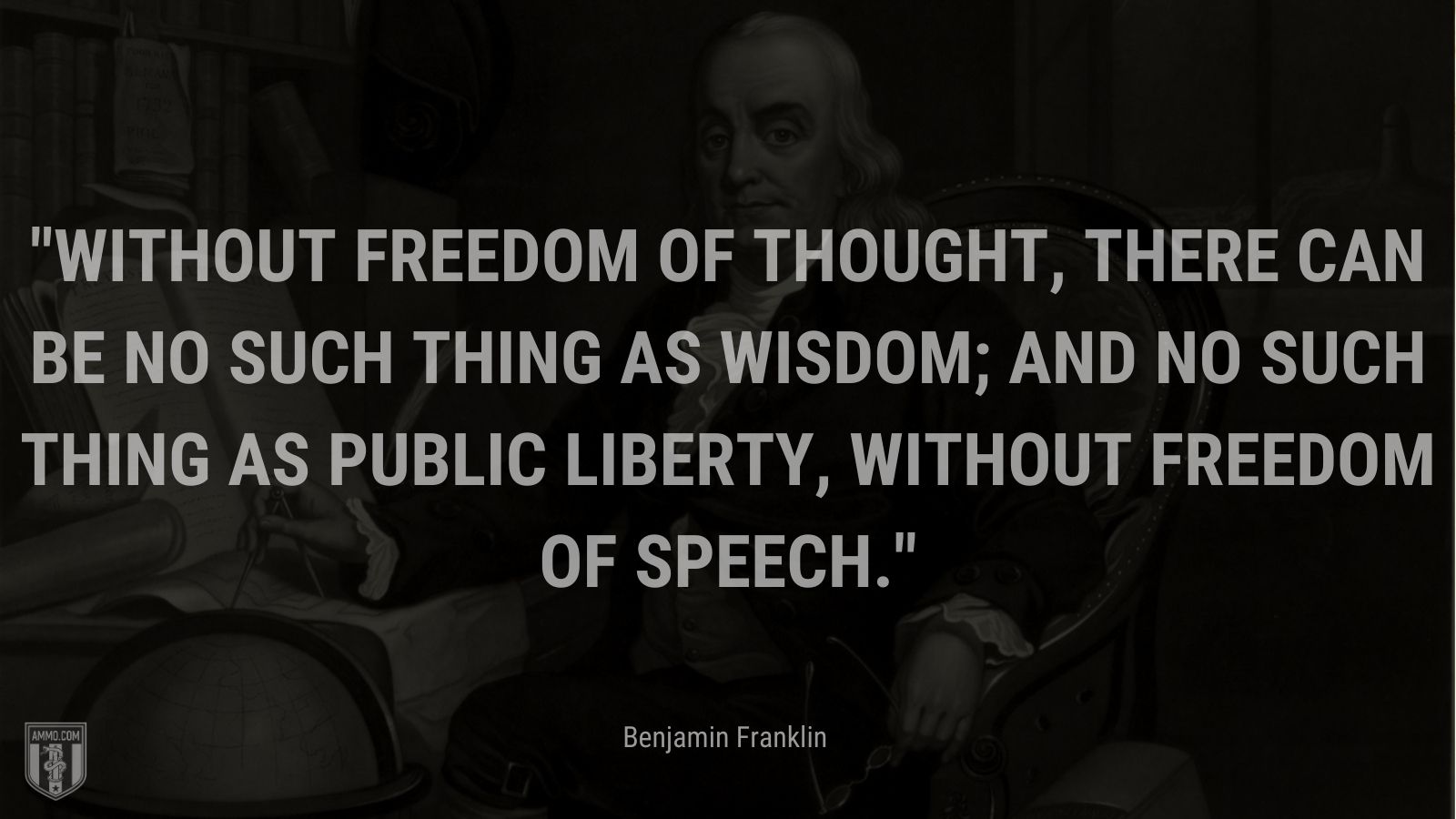 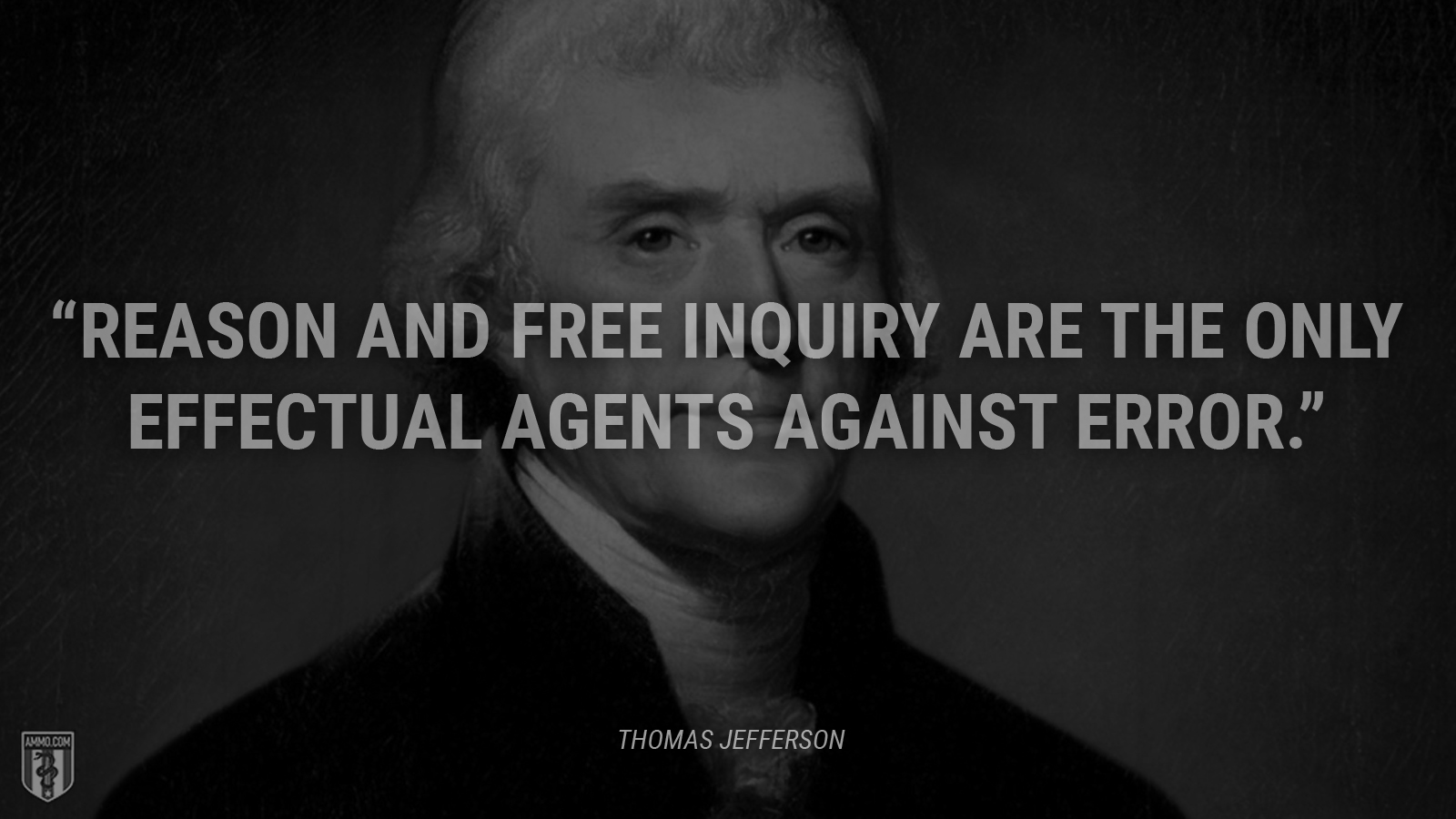 “Reason and free inquiry are the only effectual agents against error.” 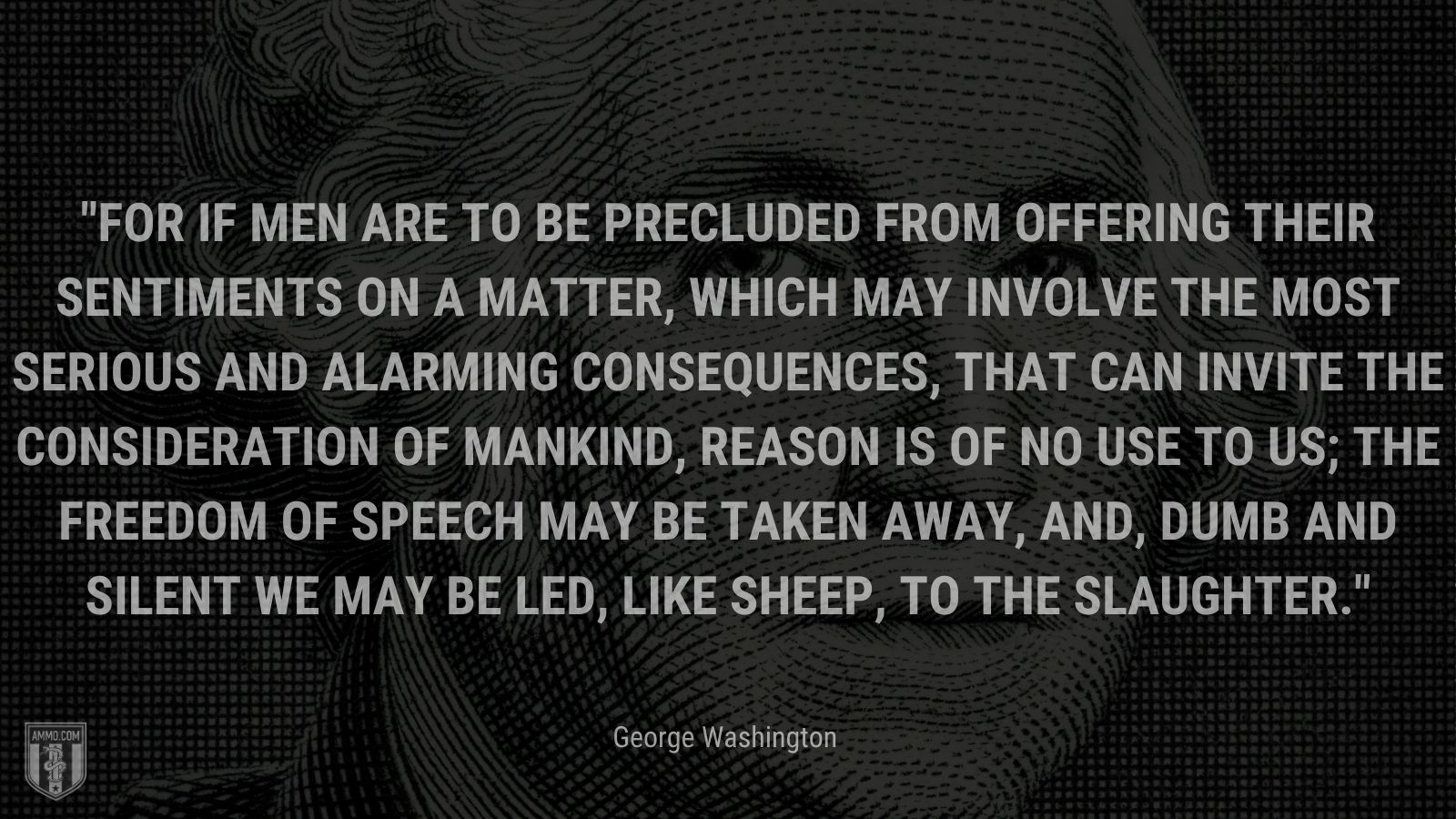 “For if Men are to be precluded from offering their Sentiments on a matter, which may involve the most serious and alarming consequences, that can invite the consideration of Mankind, reason is of no use to us; the freedom of Speech may be taken away, and, dumb and silent we may be led, like sheep, to the Slaughter.” 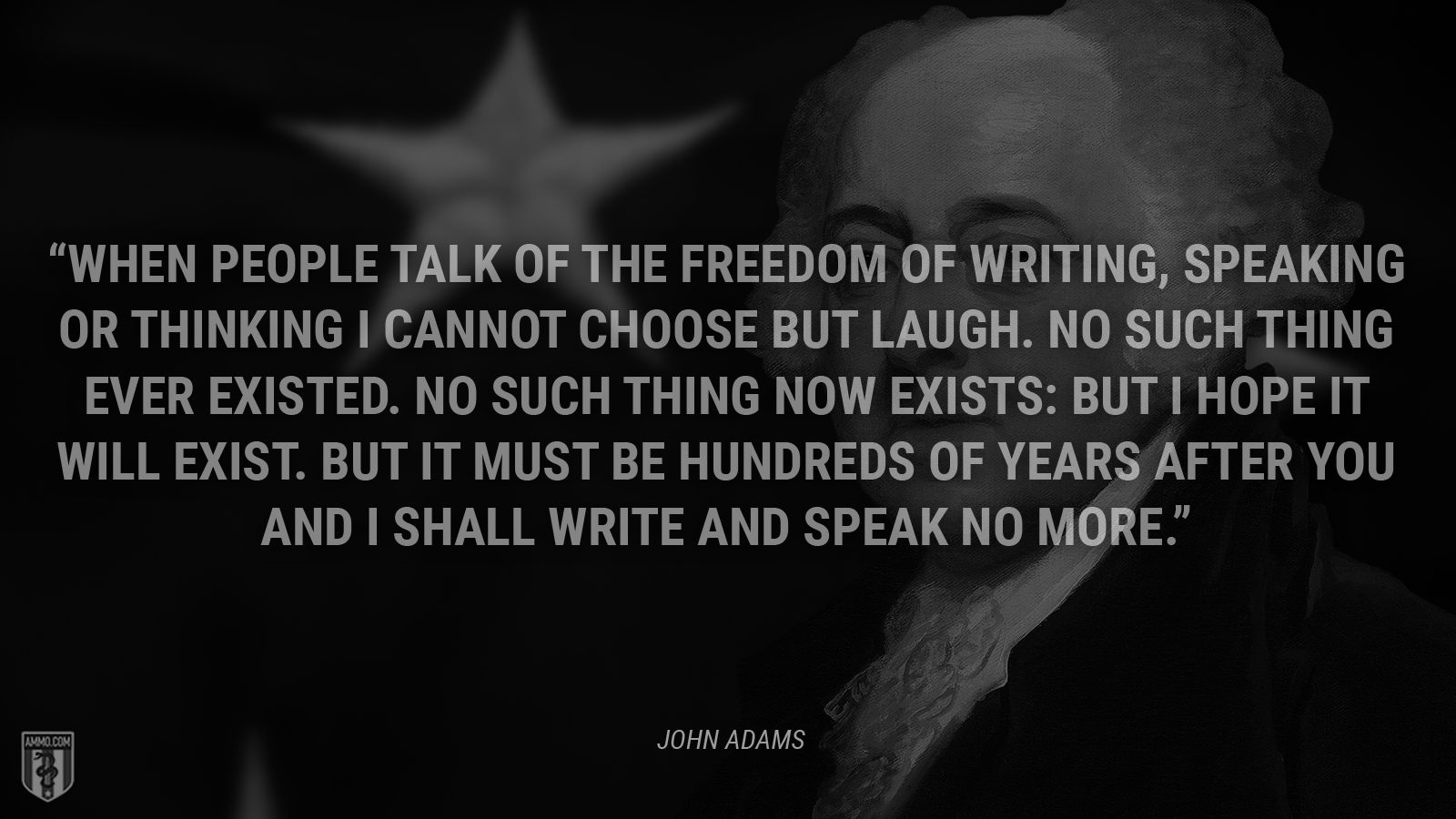 “When people talk of the freedom of writing, speaking or thinking I cannot choose but laugh. No such thing ever existed. No such thing now exists: but I hope it will exist. But it must be hundreds of years after you and I shall write and speak no more.” 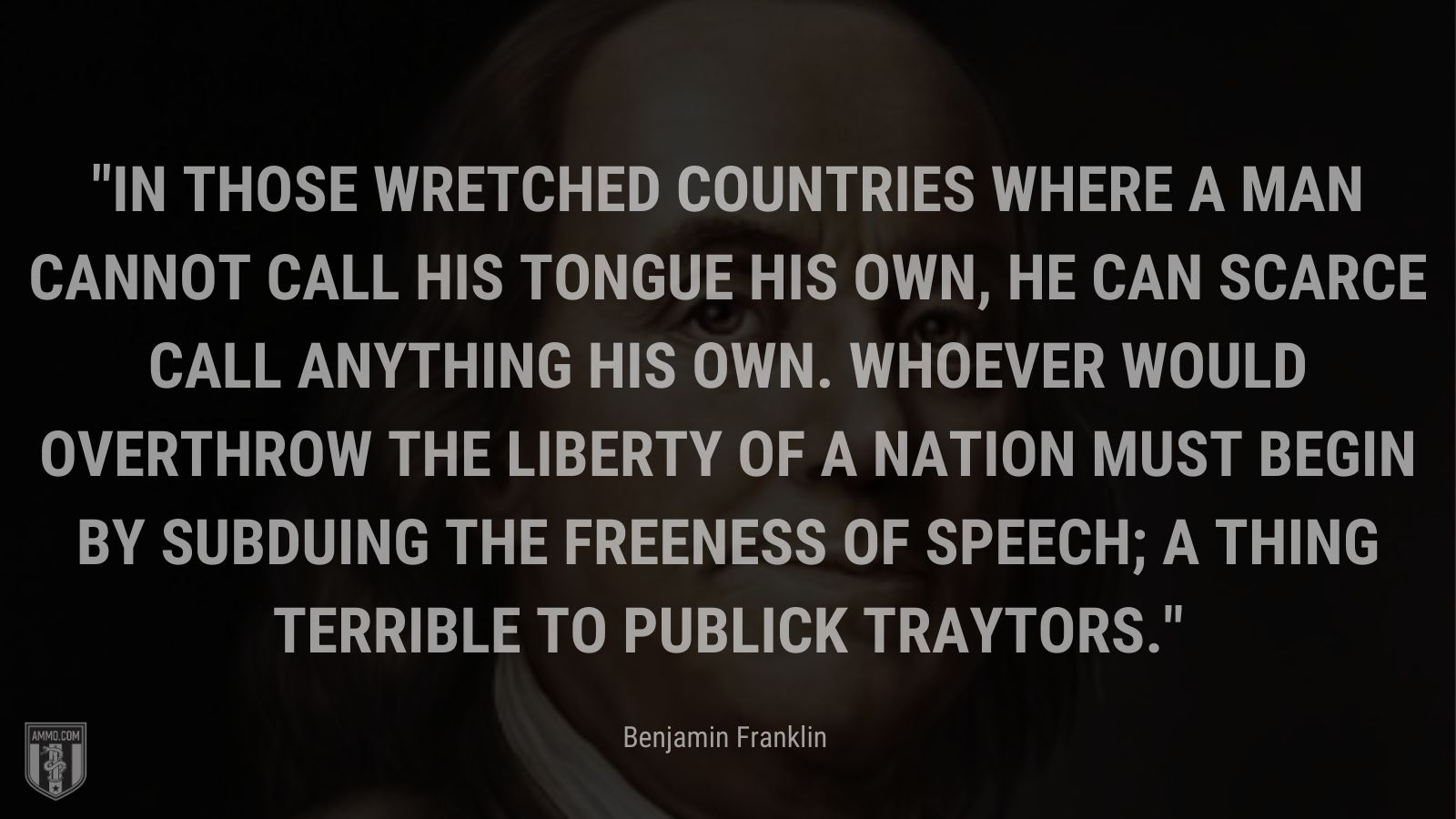 “In those wretched countries where a man cannot call his tongue his own, he can scarce call anything his own. Whoever would overthrow the liberty of a nation must begin by subduing the freeness of speech; a thing terrible to publick traytors.” 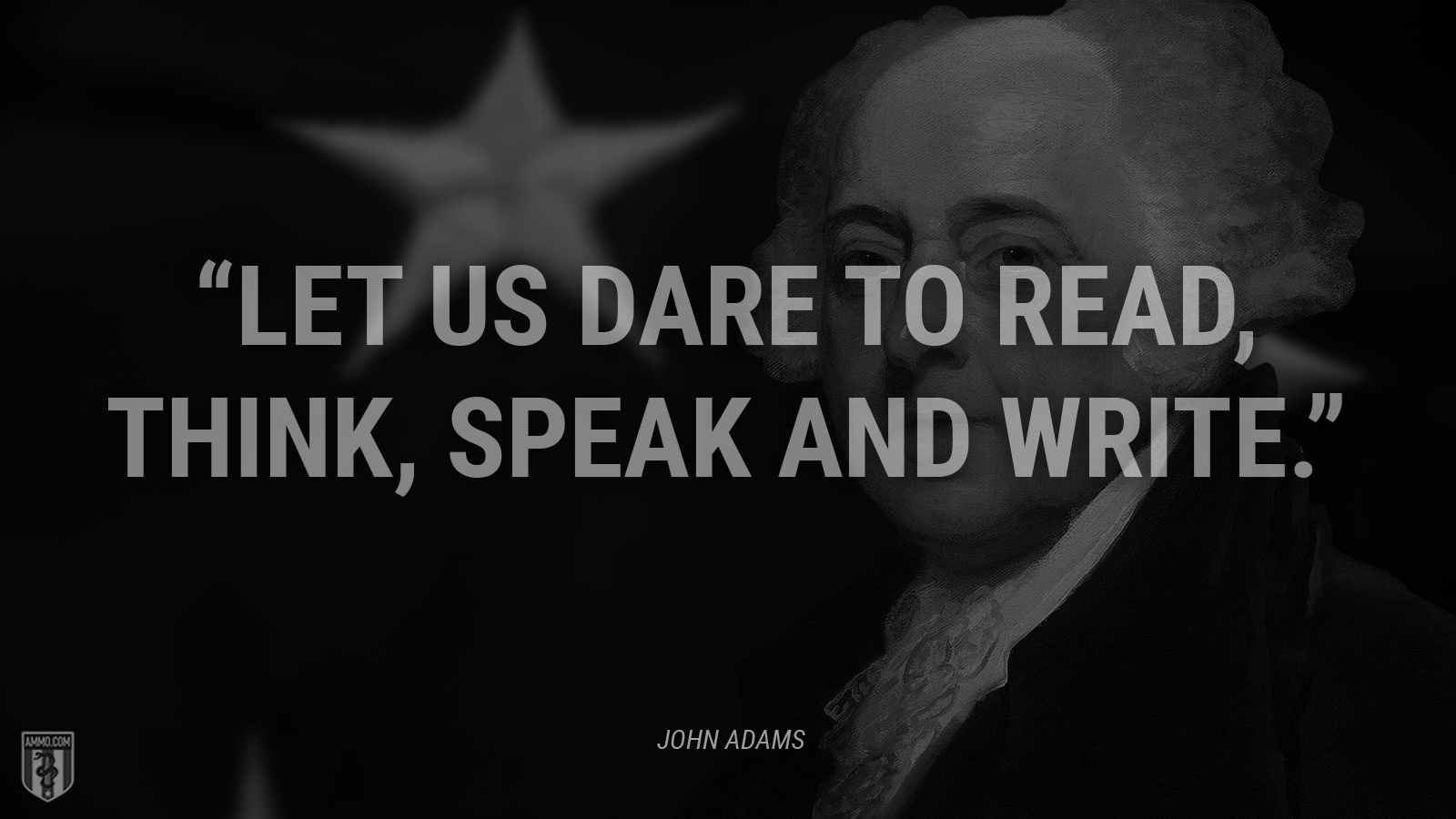 “Let us dare to read, think, speak and write.” 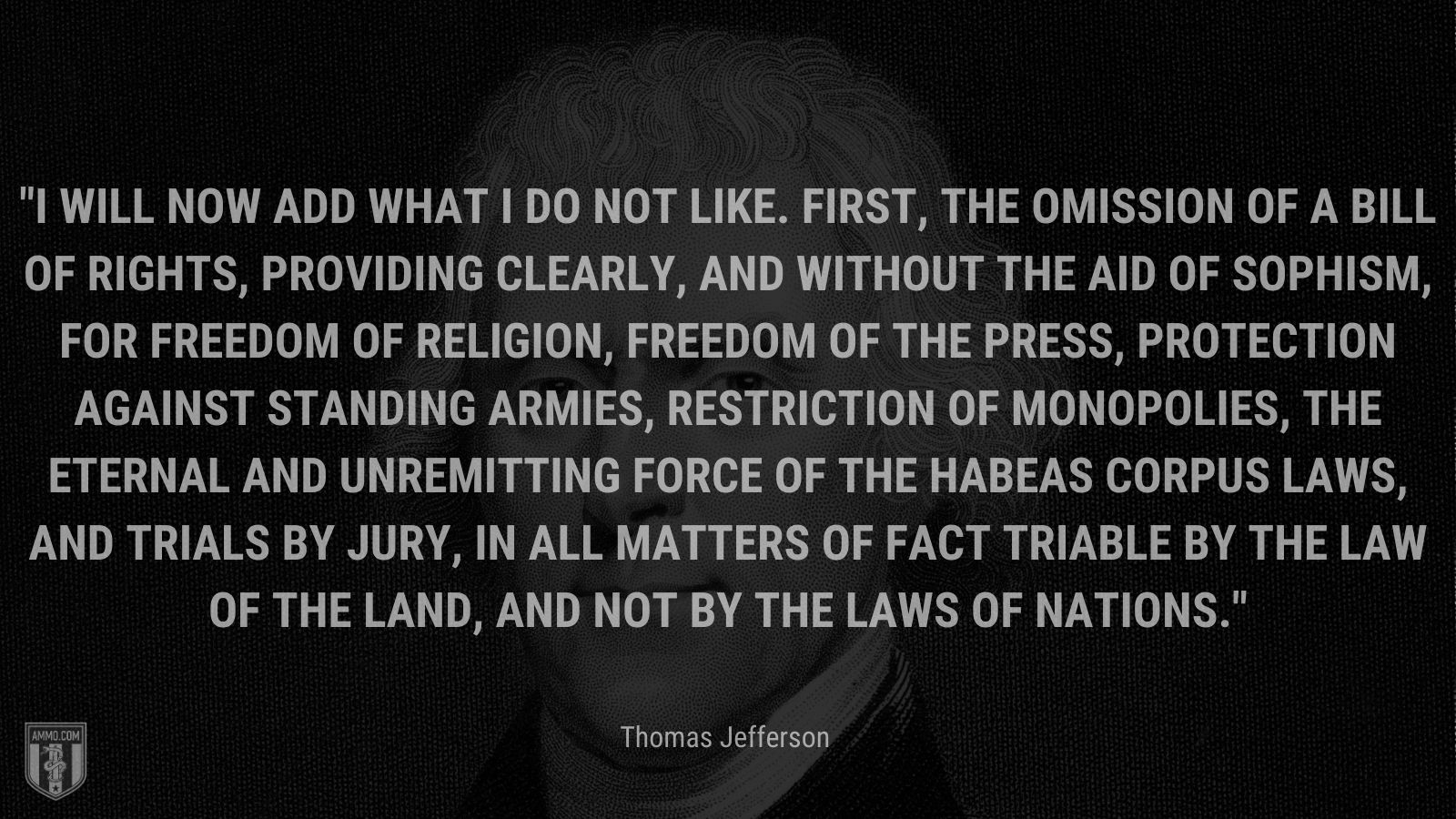 “I will now add what I do not like. First, the omission of a bill of rights, providing clearly, and without the aid of sophism, for freedom of religion, freedom of the press, protection against standing armies, restriction of monopolies, the eternal and unremitting force of the habeas corpus laws, and trials by jury, in all matters of fact triable by the law of the land, and not by the laws of nations.”

On Freedom of the Press 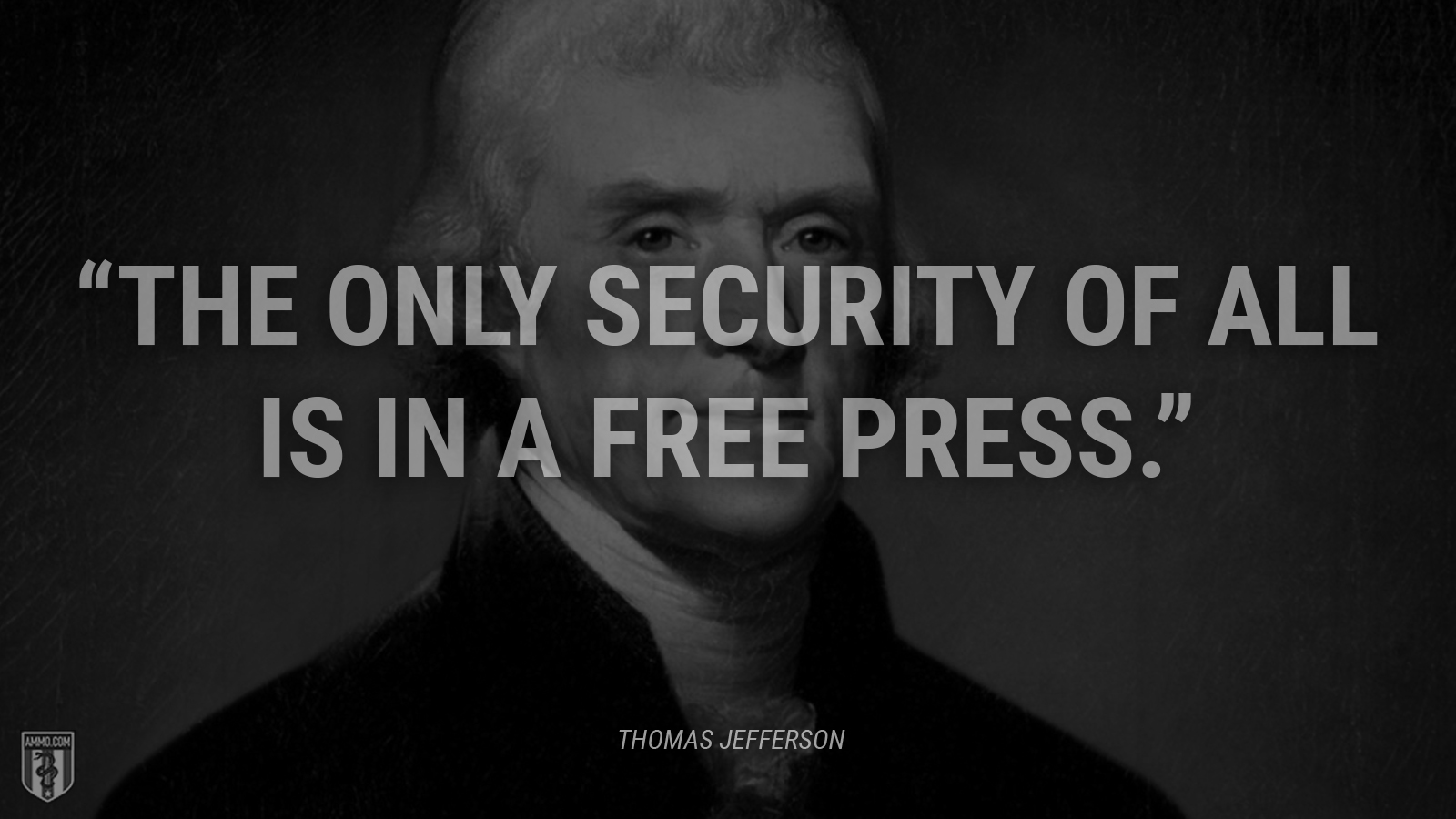 “The only security of all is in a free press.” 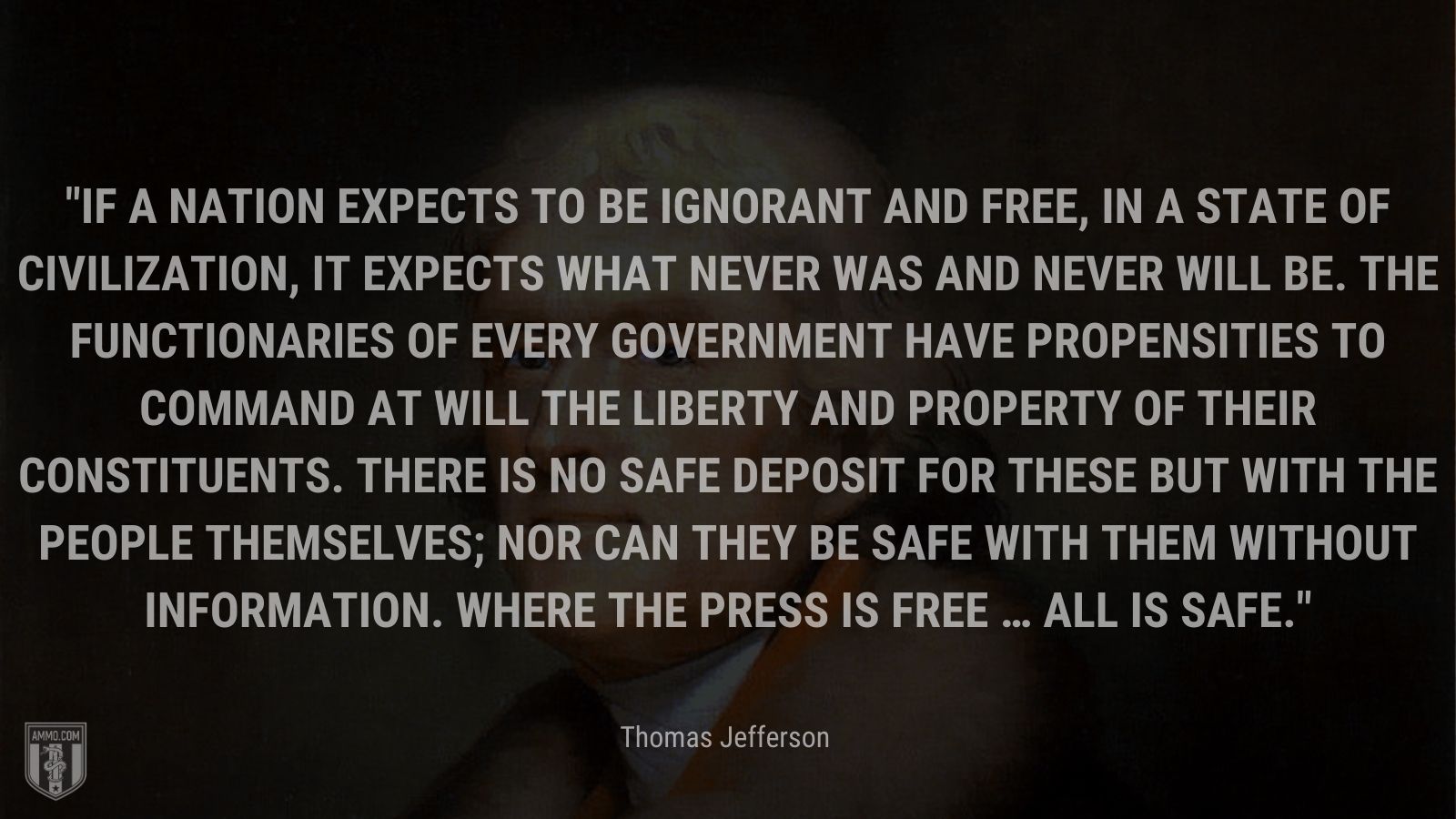 “If a nation expects to be ignorant and free, in a state of civilization, it expects what never was and never will be. The functionaries of every government have propensities to command at will the liberty and property of their constituents. There is no safe deposit for these but with the people themselves; nor can they be safe with them without information. Where the press is free … all is safe.” 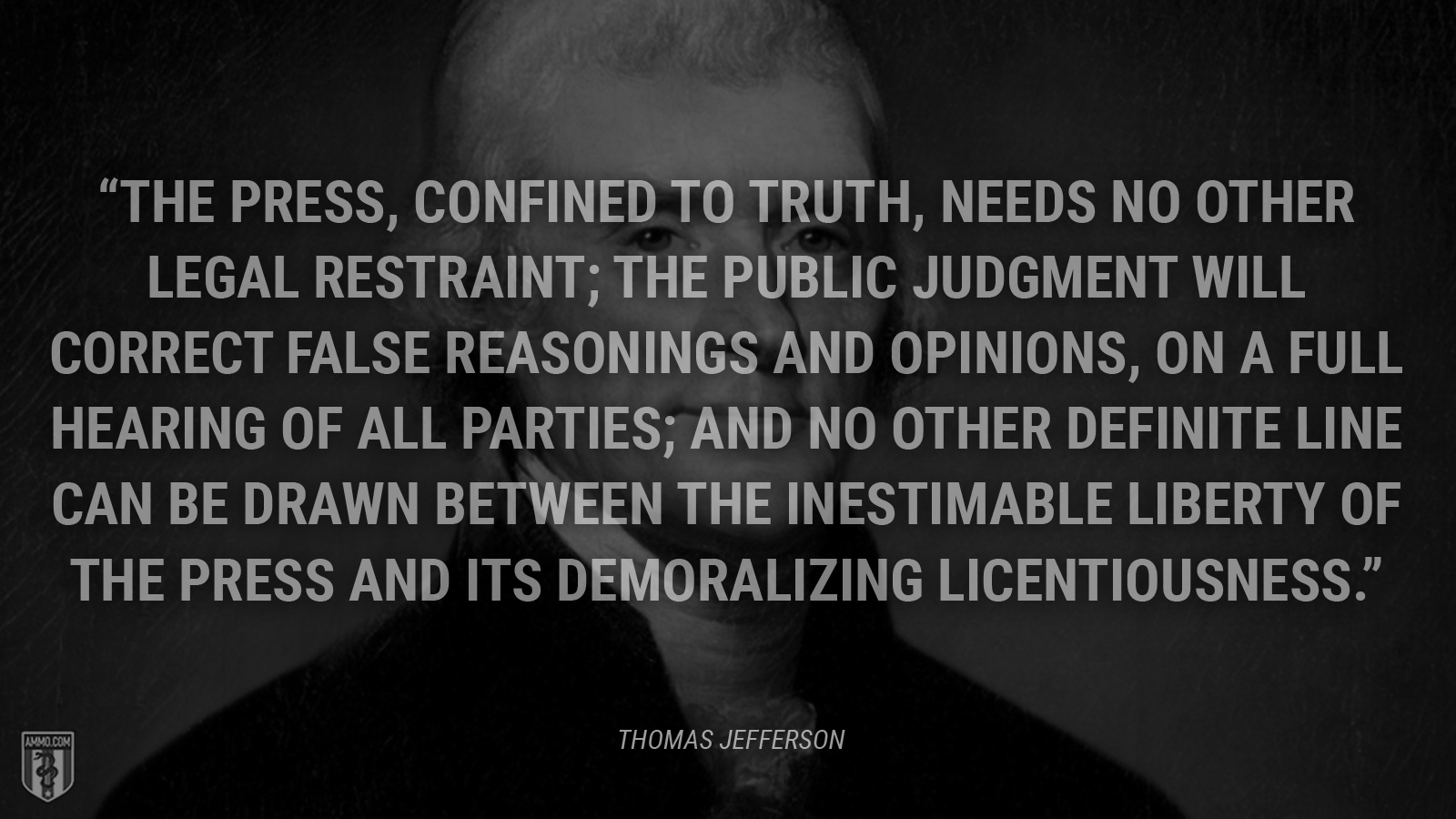 “The press, confined to truth, needs no other legal restraint; the public judgment will correct false reasonings and opinions, on a full hearing of all parties; and no other definite line can be drawn between the inestimable liberty of the press and its demoralizing licentiousness.” 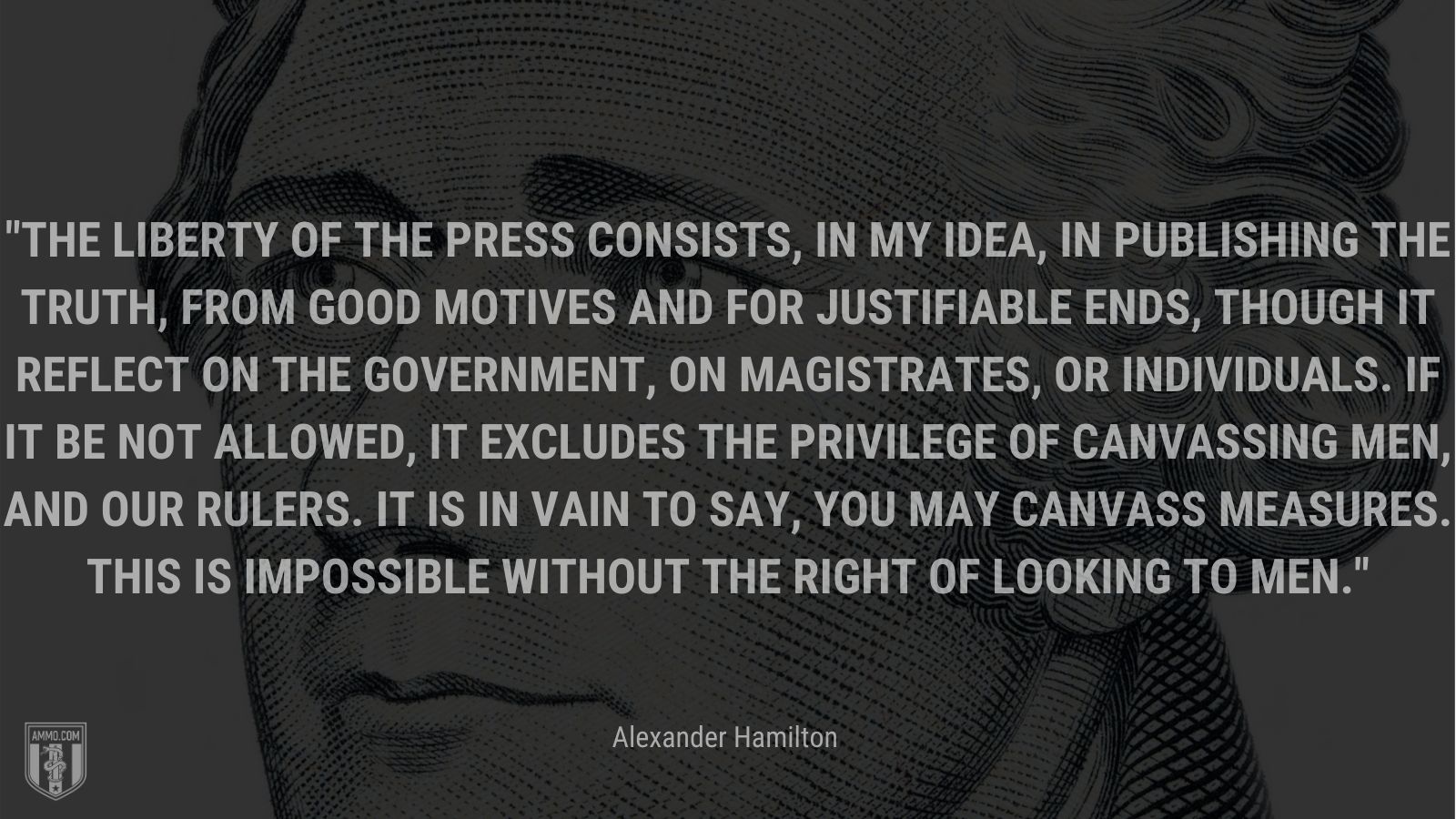 “The liberty of the press consists, in my idea, in publishing the truth, from good motives and for justifiable ends, though it reflect on the government, on magistrates, or individuals. If it be not allowed, it excludes the privilege of canvassing men, and our rulers. It is in vain to say, you may canvass measures. This is impossible without the right of looking to men.” 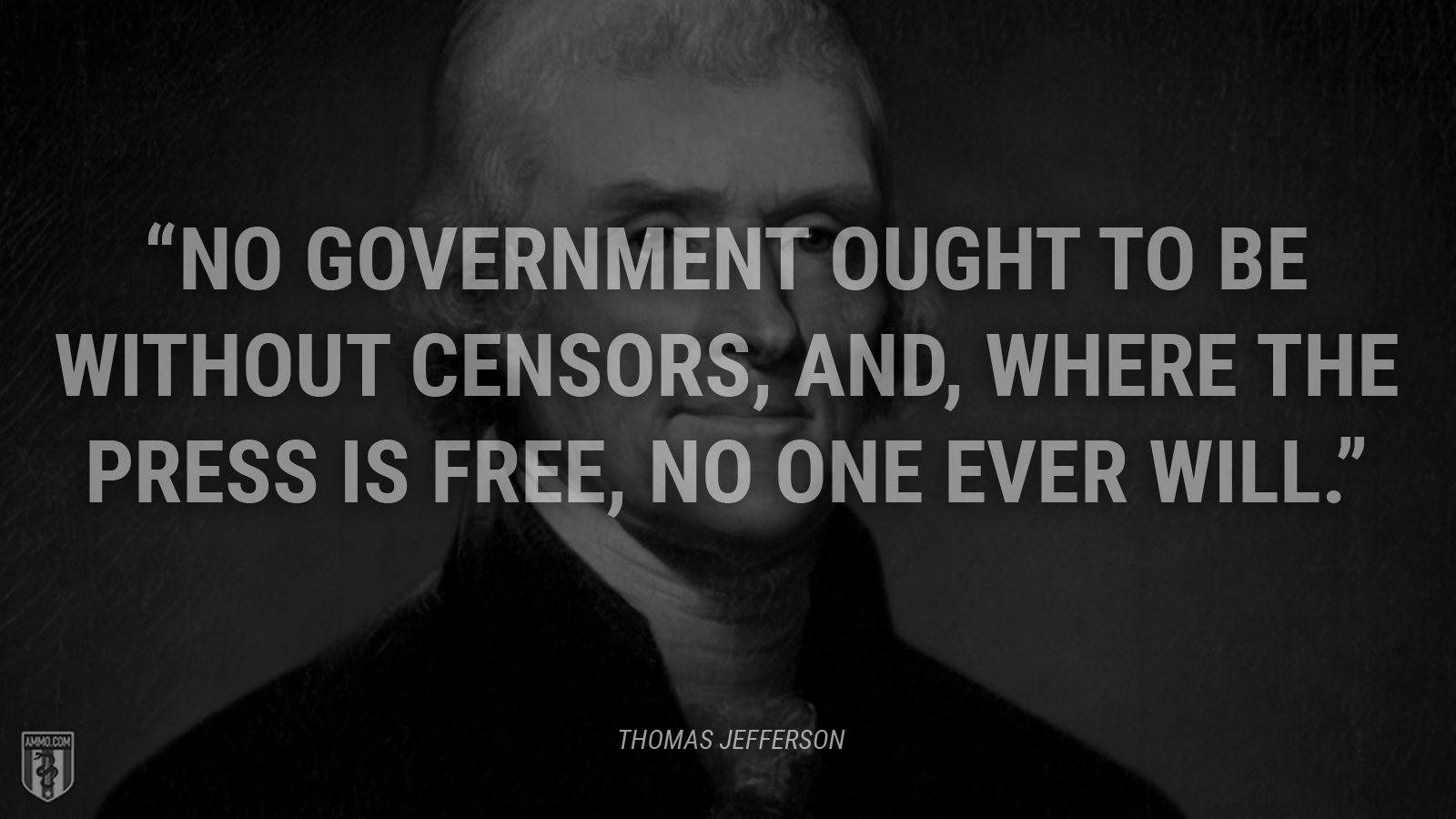 “No government ought to be without censors, and, where the press is free, no one ever will.” 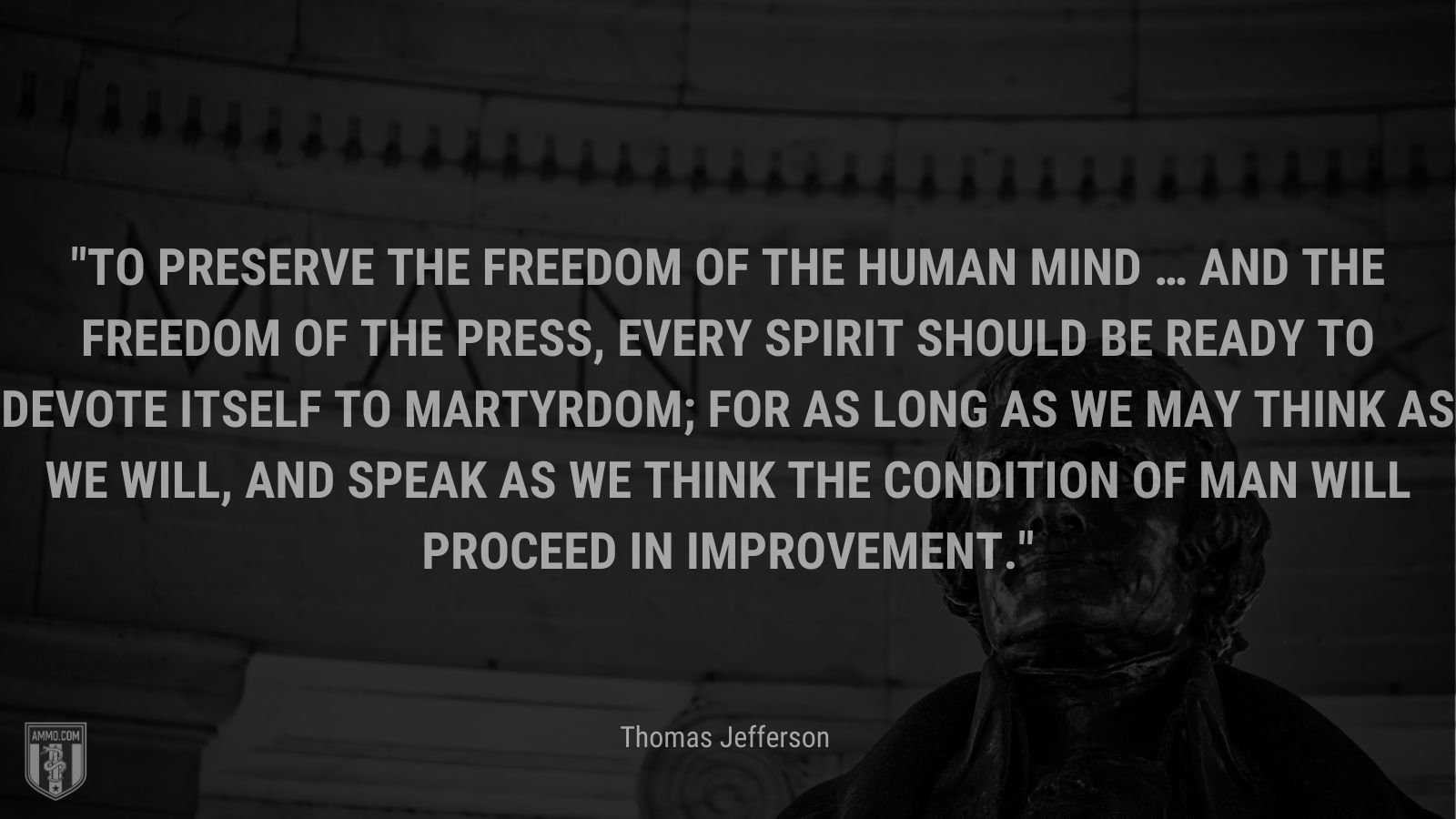 “To preserve the freedom of the human mind … and the freedom of the press, every spirit should be ready to devote itself to martyrdom; for as long as we may think as we will, and speak as we think the condition of man will proceed in improvement.” 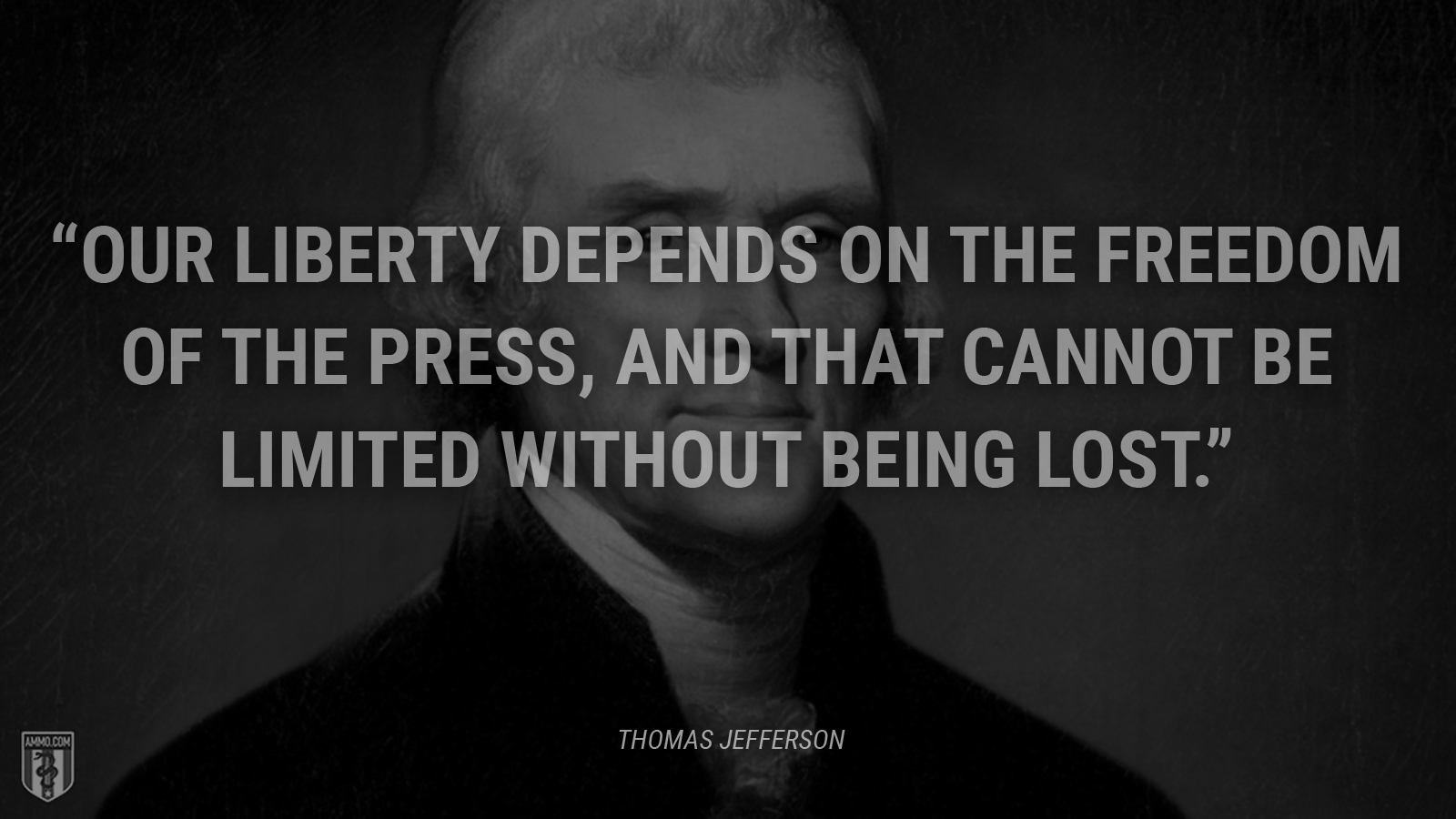 “Our liberty depends on the freedom of the press, and that cannot be limited without being lost.” 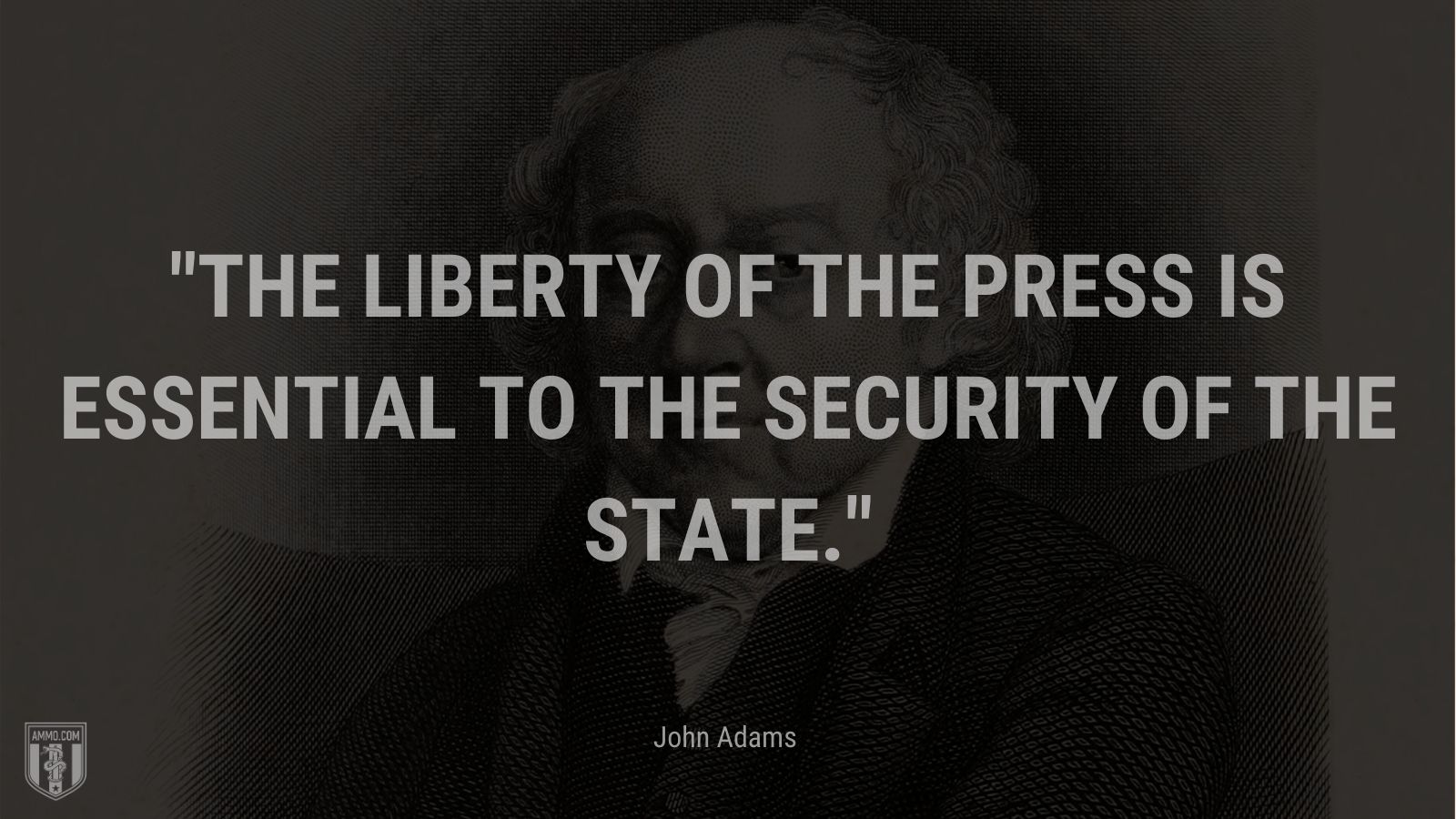 “The liberty of the press is essential to the security of the state.” 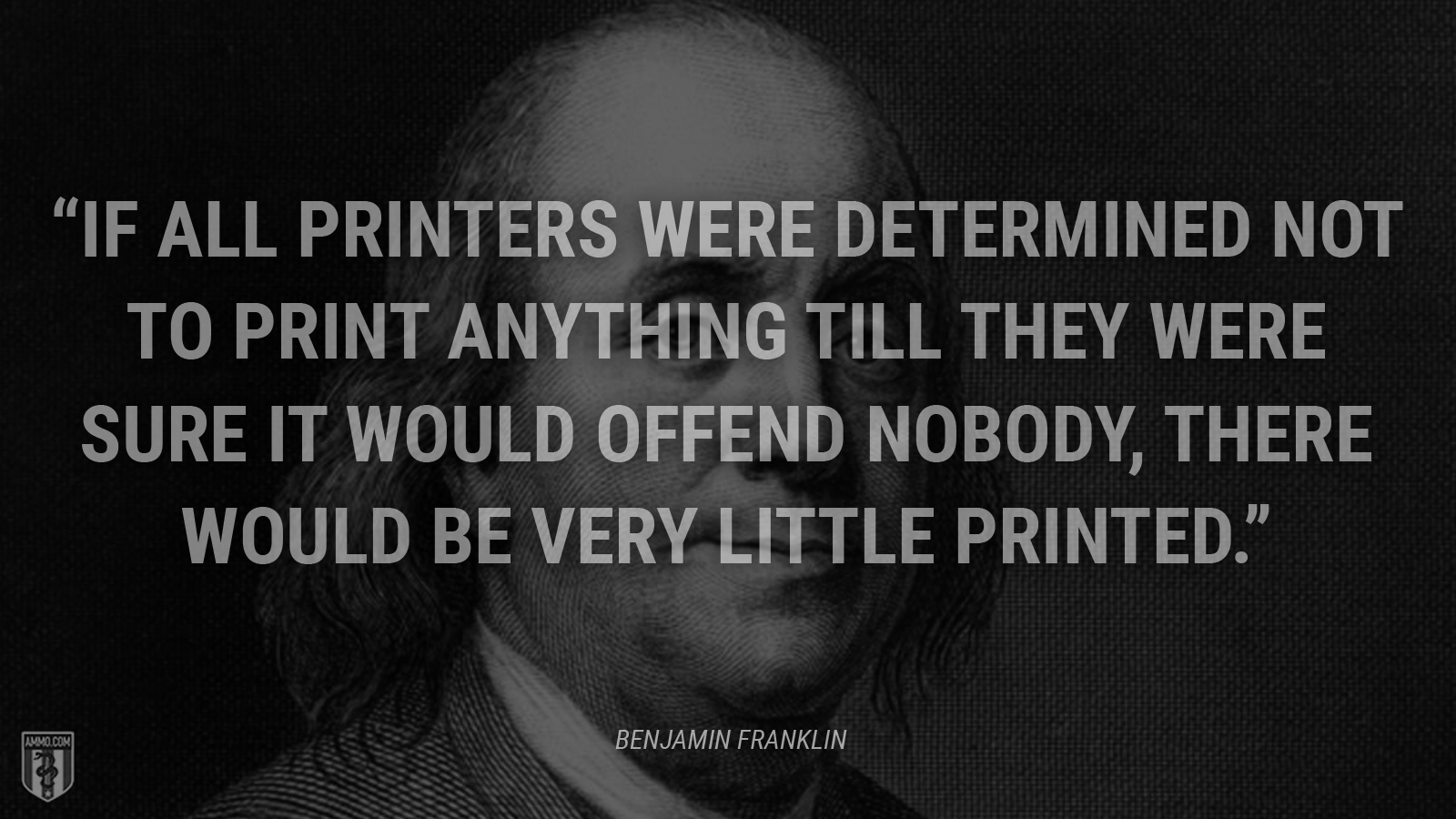 “If all printers were determined not to print anything till they were sure it would offend nobody, there would be very little printed.” 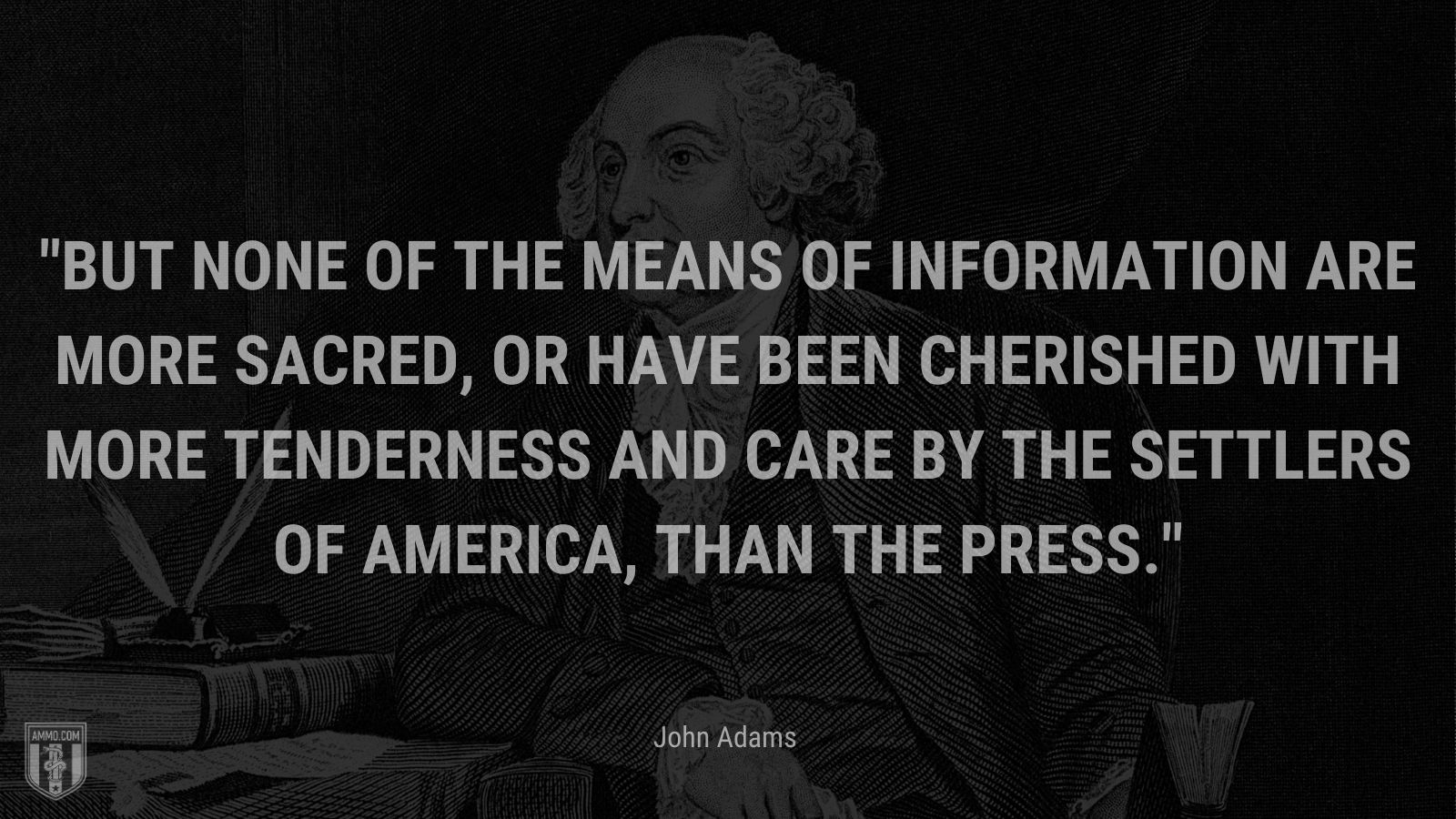 “But none of the means of information are more sacred, or have been cherished with more tenderness and care by the settlers of America, than the press.” 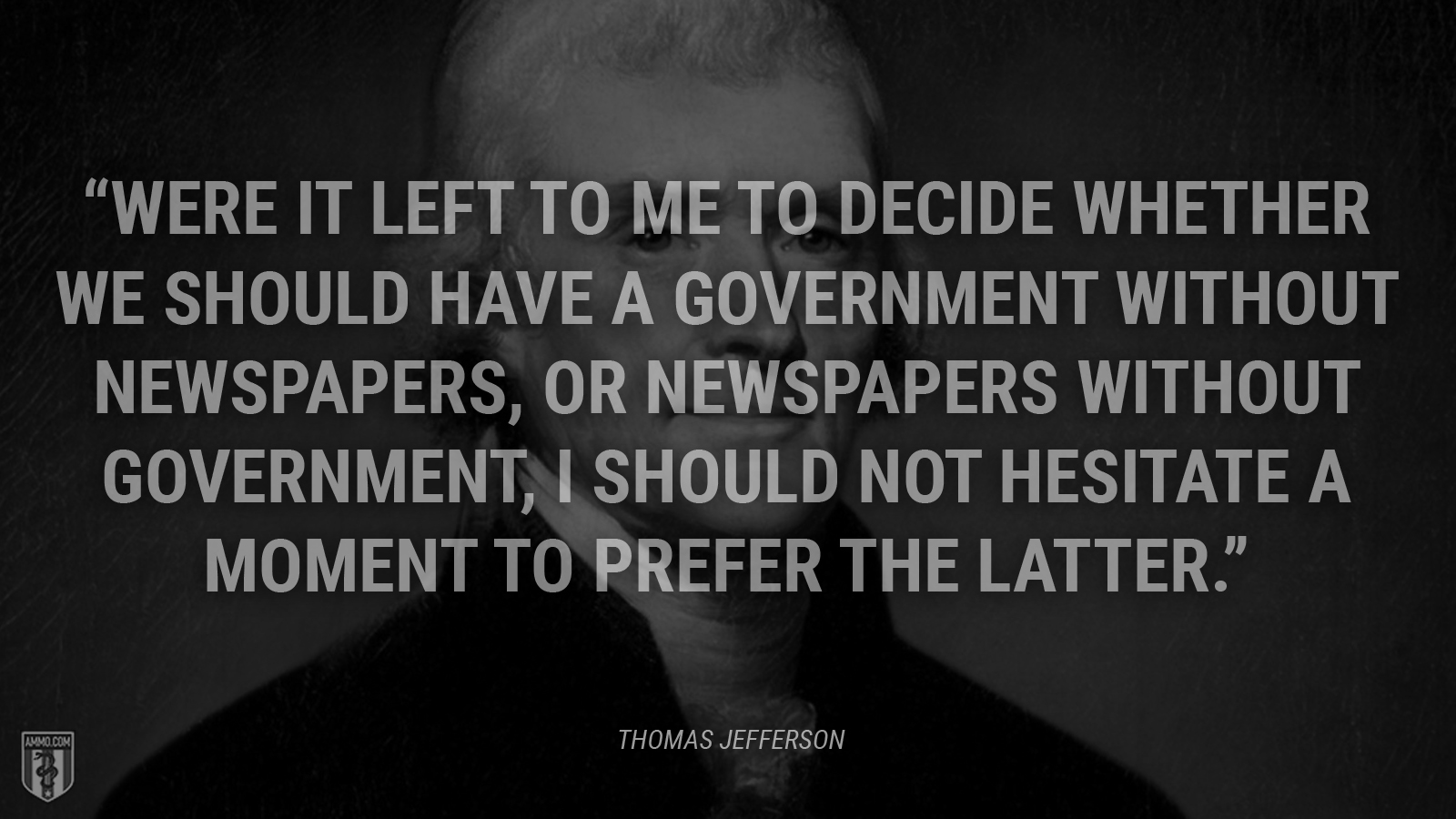 “Were it left to me to decide whether we should have a government without newspapers, or newspapers without government, I should not hesitate a moment to prefer the latter.” 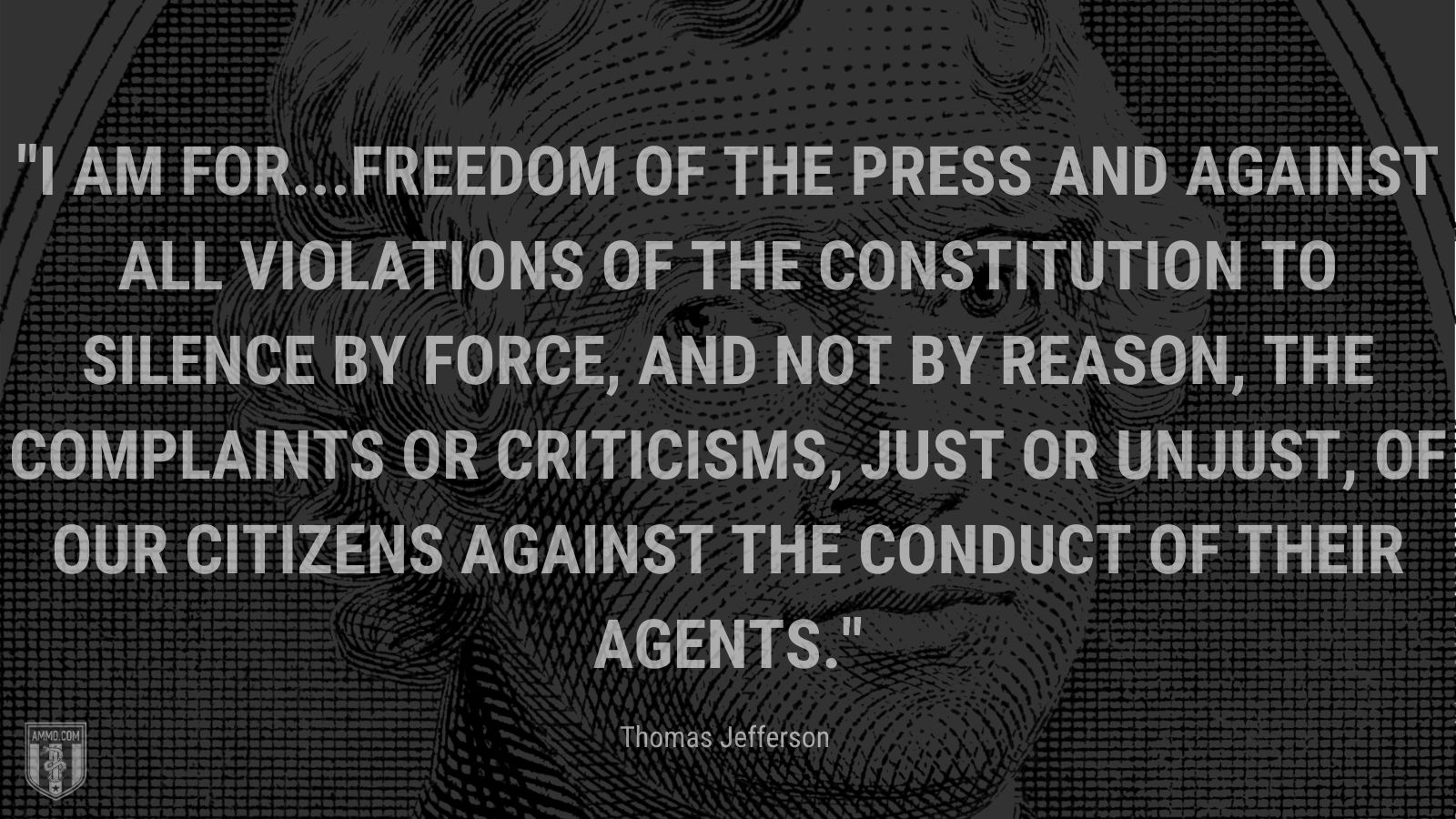 “I am for...freedom of the press and against all violations of the Constitution to silence by force, and not by reason, the complaints or criticisms, just or unjust, of our citizens against the conduct of their agents.” 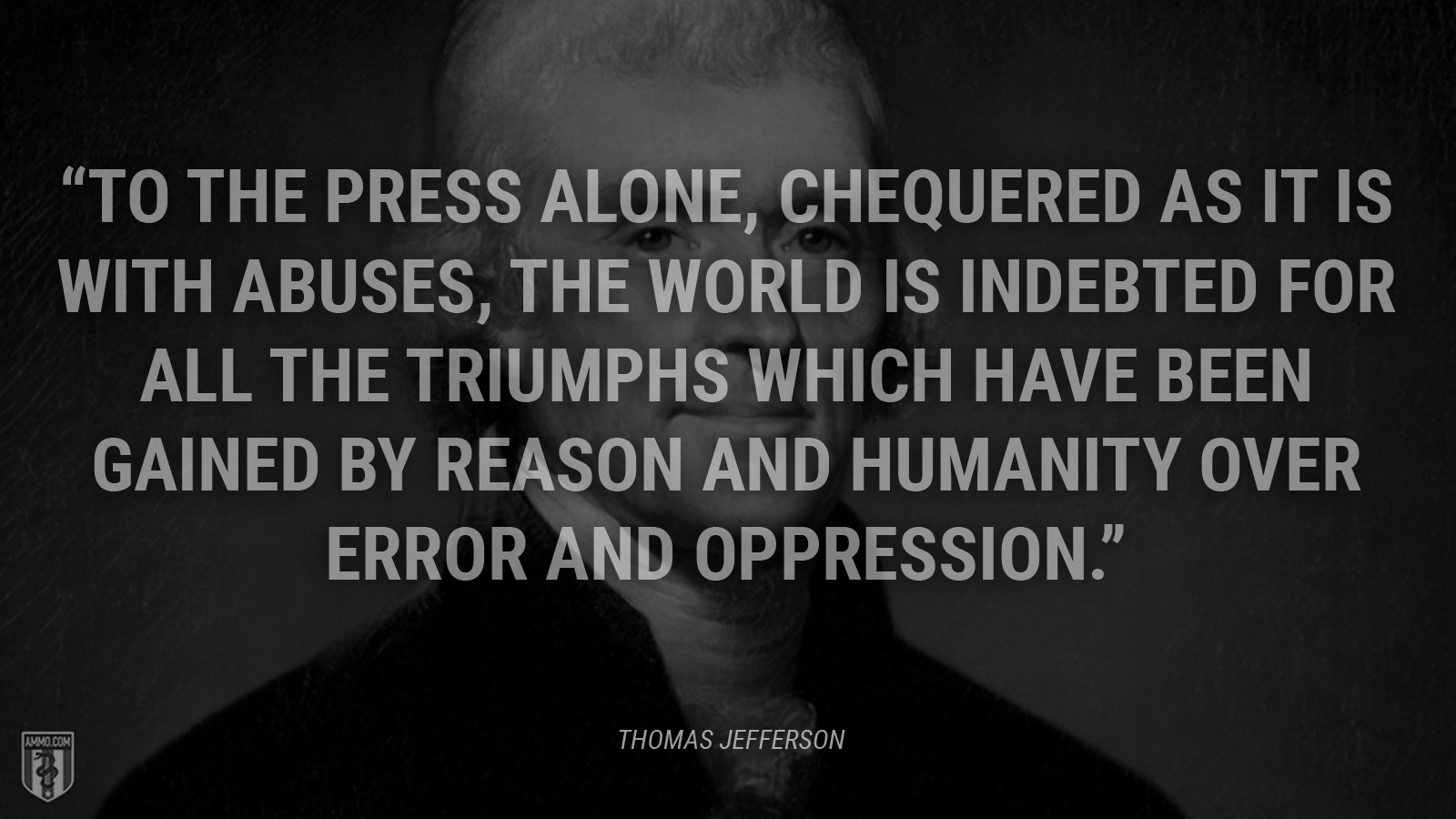 “To the press alone, chequered as it is with abuses, the world is indebted for all the triumphs which have been gained by reason and humanity over error and oppression.” 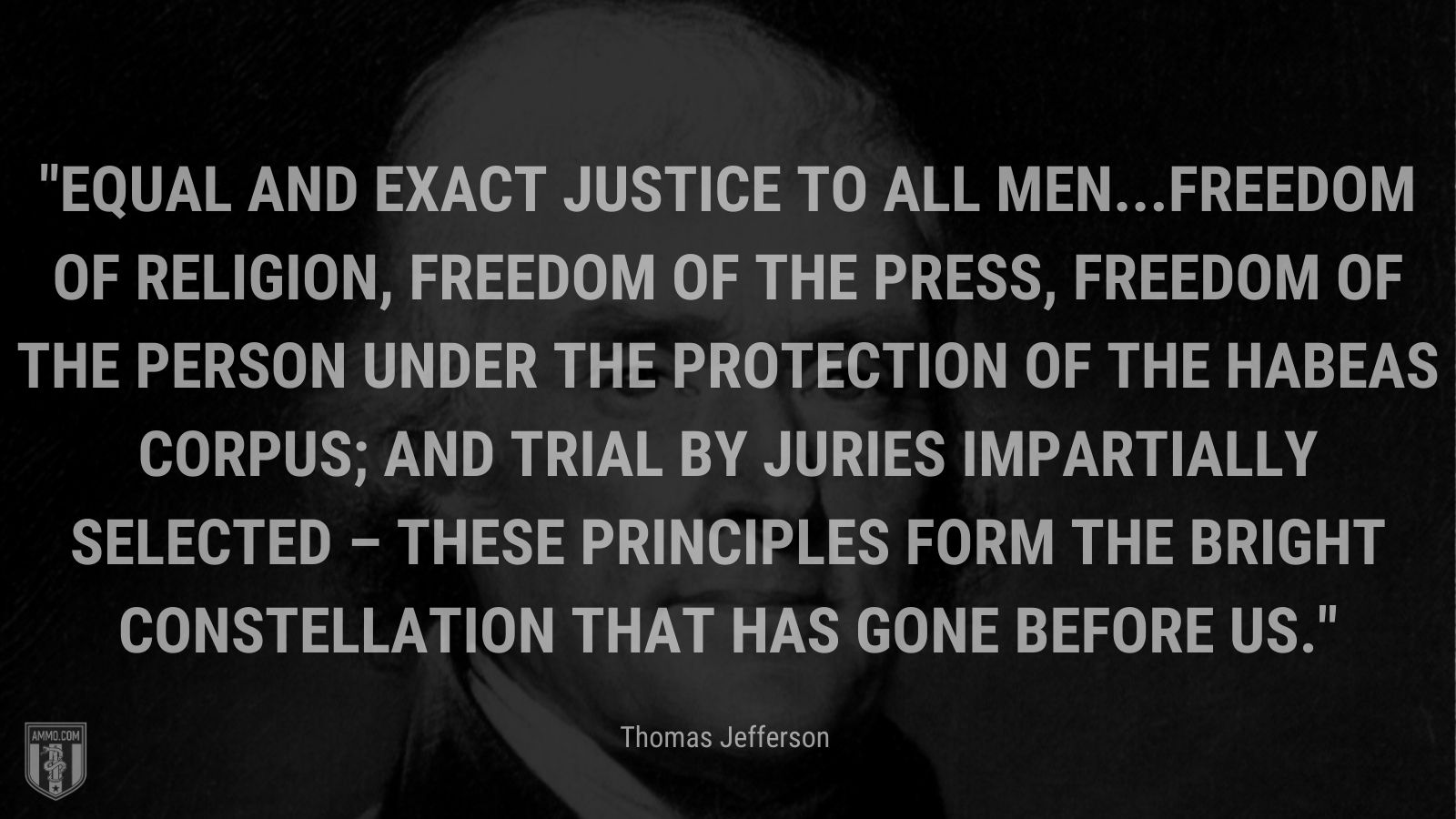 “Equal and exact justice to all men...freedom of religion, freedom of the press, freedom of the person under the protection of the habeas corpus; and trial by juries impartially selected – these principles form the bright constellation that has gone before us.”