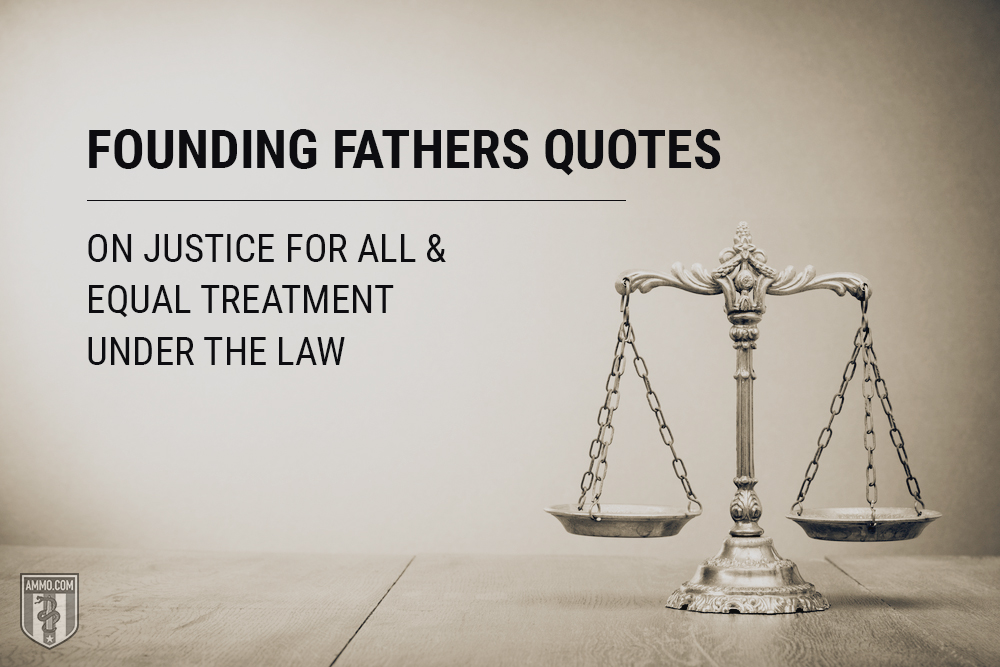 “Equality” is a term that gets thrown around a lot in our time, but to the Founders it meant something very specific: Equal treatment under the law. While the nation did permit slavery in many states at its founding, even several of those Founders who owned slaves did not see it as an ideal situation or even one which was sustainable. Manumission, the freeing of one’s slaves, was, in many cases, a legal impossibility for the Founders.

Justice was seen as applying to all, but it was also considered highly important by the Founders to protect the minority under a democratic system. This is why the system of checks and balances was put in place – to prevent the government from being able to do very much, and to act very slowly when it did act. The Constitution takes great pains to both ensure justice for all, as well as protect the minority from the will of the majority. The Electoral College is one example of this that still exists today, protecting the rural states from being ruled over by three or four large cities. 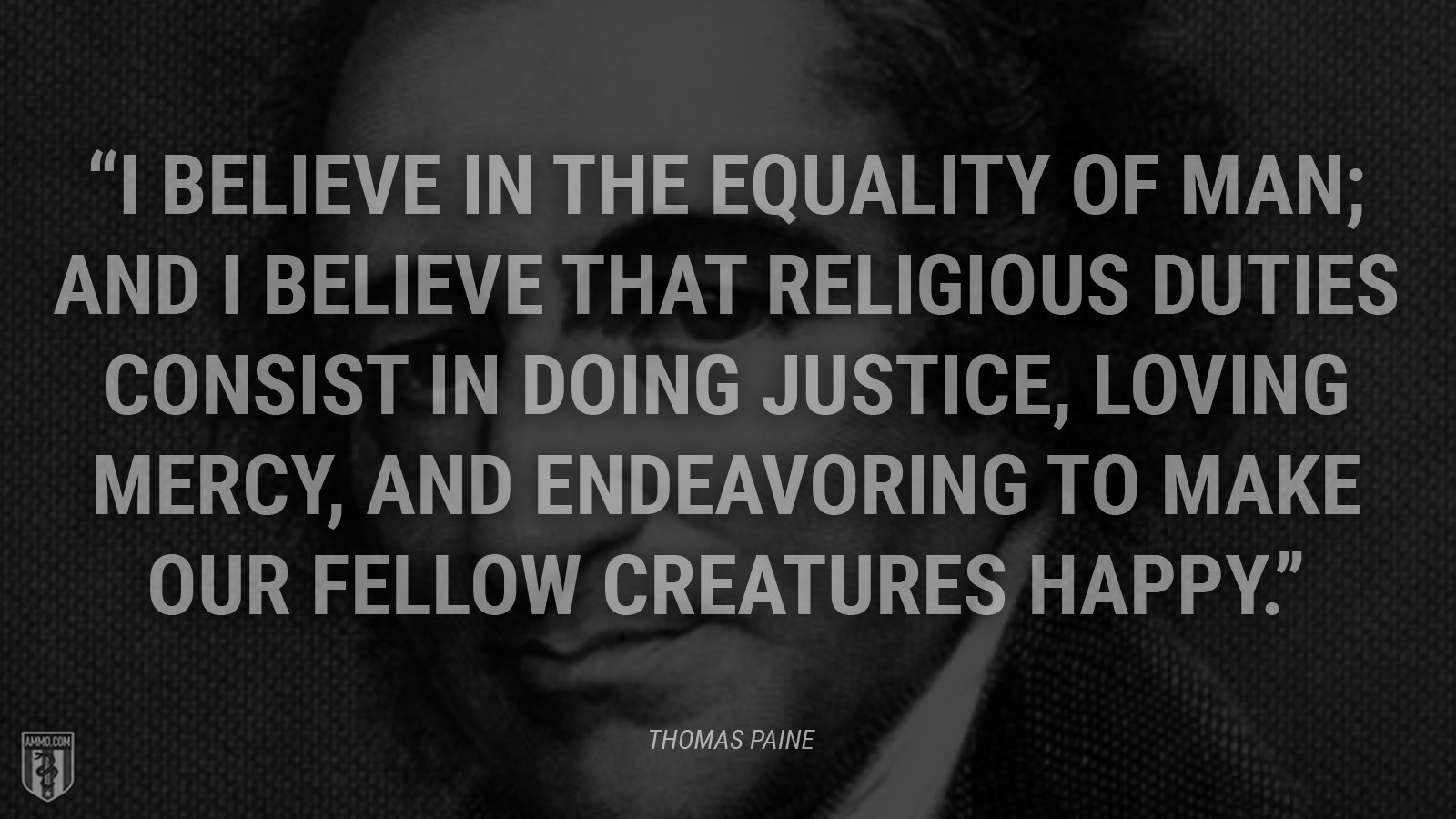 “I believe in the equality of man; and I believe that religious duties consist in doing justice, loving mercy, and endeavoring to make our fellow creatures happy.”

“...it being among my first wishes to see some plan adopted, by the legislature by which slavery in this Country may be abolished by slow, sure, and imperceptable degrees.”

“Slavery is such an atrocious debasement of human nature, that its very extirpation, if not performed with solicitous care, may sometimes open a source of serious evils.” 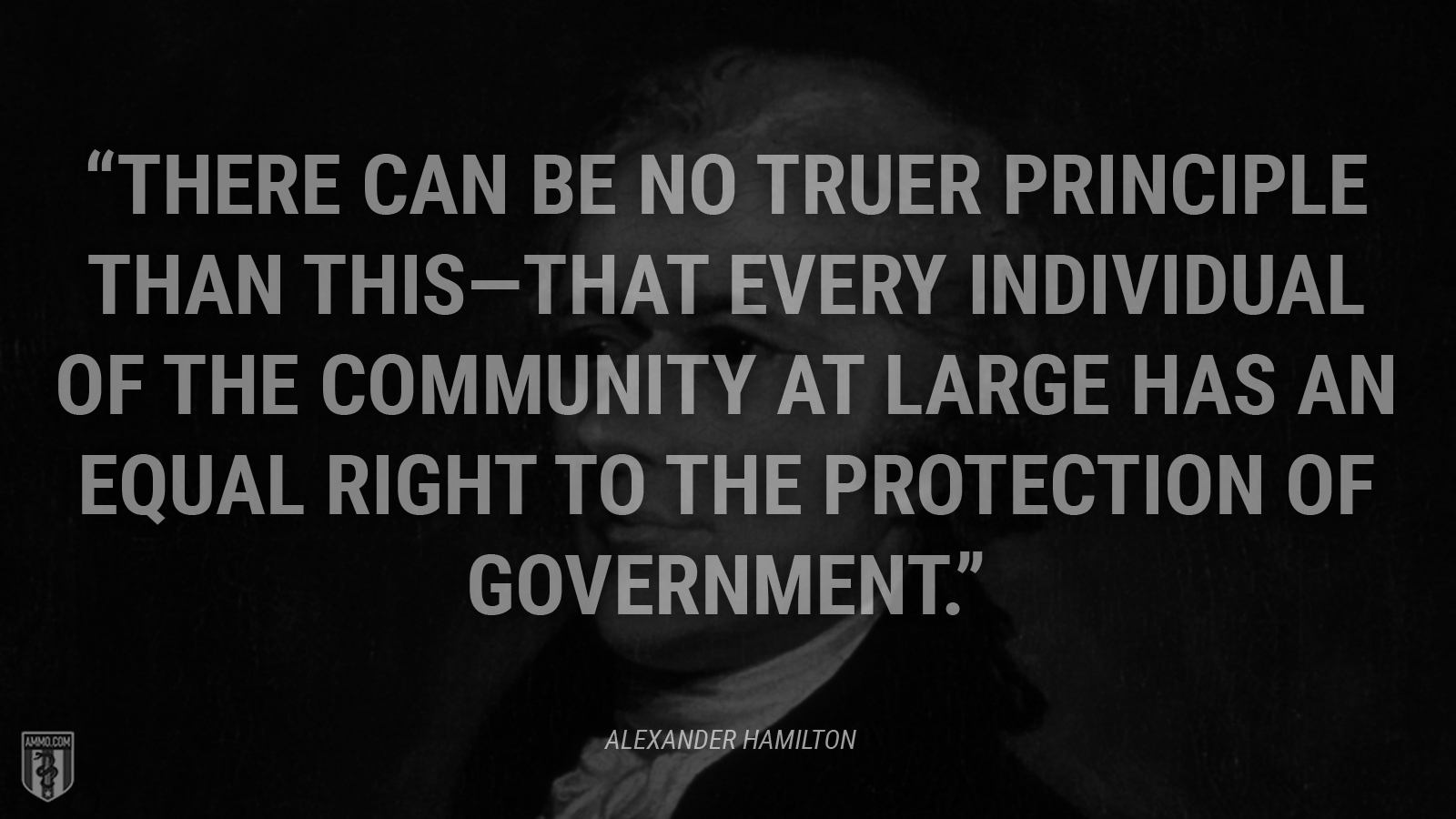 “There can be no truer principle than this—that every individual of the community at large has an equal right to the protection of government.”

“As mankind becomes more liberal, they will be more able to allow that those who conduct themselves as worthy members of the community are equally entitled to the protection of civil government. I hope ever to see America among the foremost nations in examples of justice and liberality.”

“All too will bear in mind this sacred principle, that though the will of the majority is in all cases to prevail, that will to be rightful must be reasonable; that the minority possess their equal rights, which equal law must protect, and to violate would be oppression.” 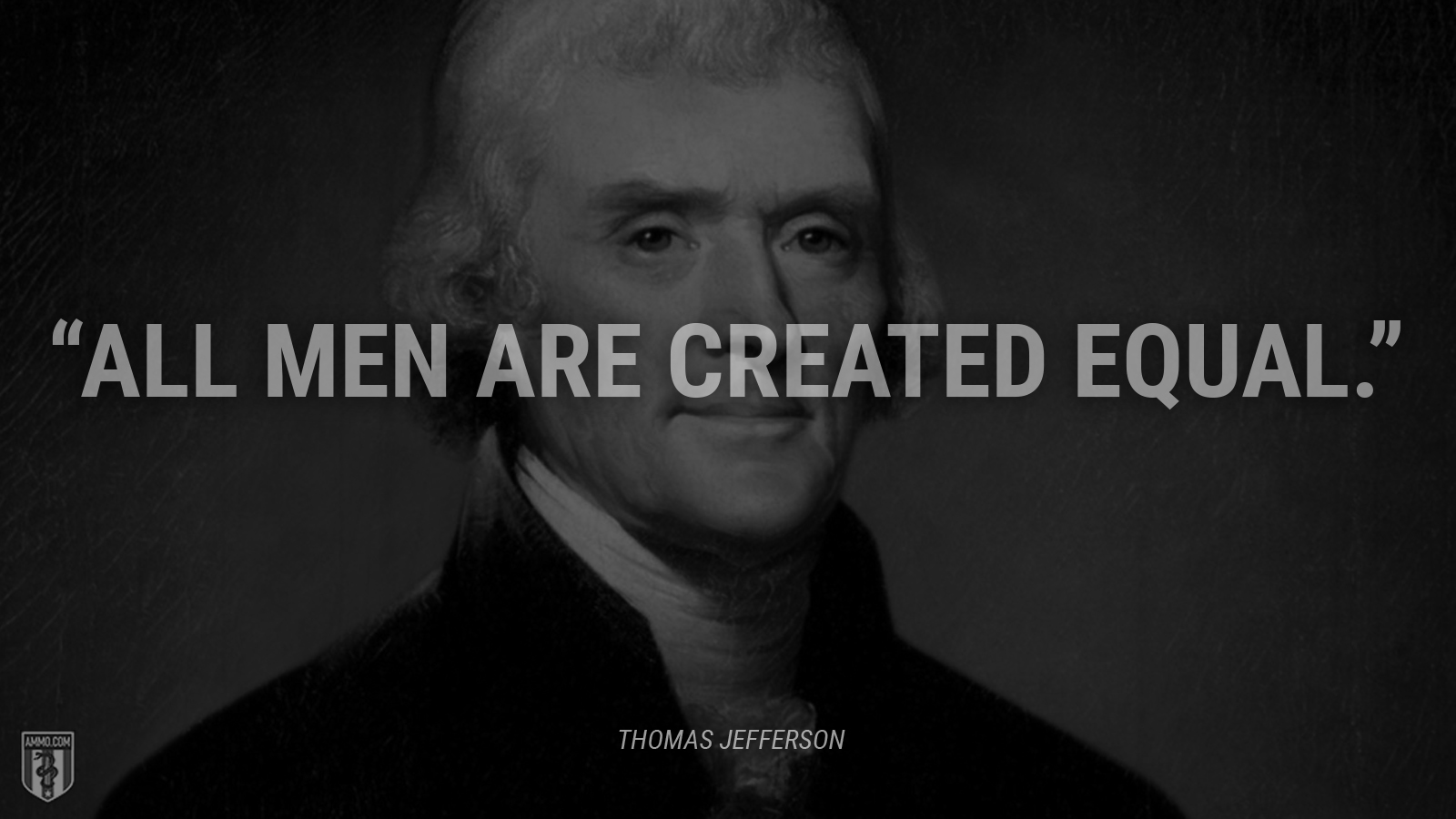 “All men are created equal.”

“We hold these truths to be self-evident; that all men are created equal; that they are endowed by their creator with certain unalienable rights; that among these are life, liberty, and the pursuit of happiness.”

“Injustice, wrong, injury excites the Feeling of Resentment, as naturally and necessarily as Frost and Ice excite the feeling of cold, as fire excites heat, and as both excite Pain. A Man may have the Faculty of concealing his Resentment, or suppressing it, but he must and ought to feel it. Nay he ought to indulge it, to cultivate it. It is a Duty. His Person, his Property, his Liberty, his Reputation are not safe without it. He ought, for his own Security and Honour, and for the public good to punish those who injure him, unless they repent, and then he should forgive, having Satisfaction and Compensation. Revenge is unlawfull. It is the same with Communities. They ought to resent and punish.” 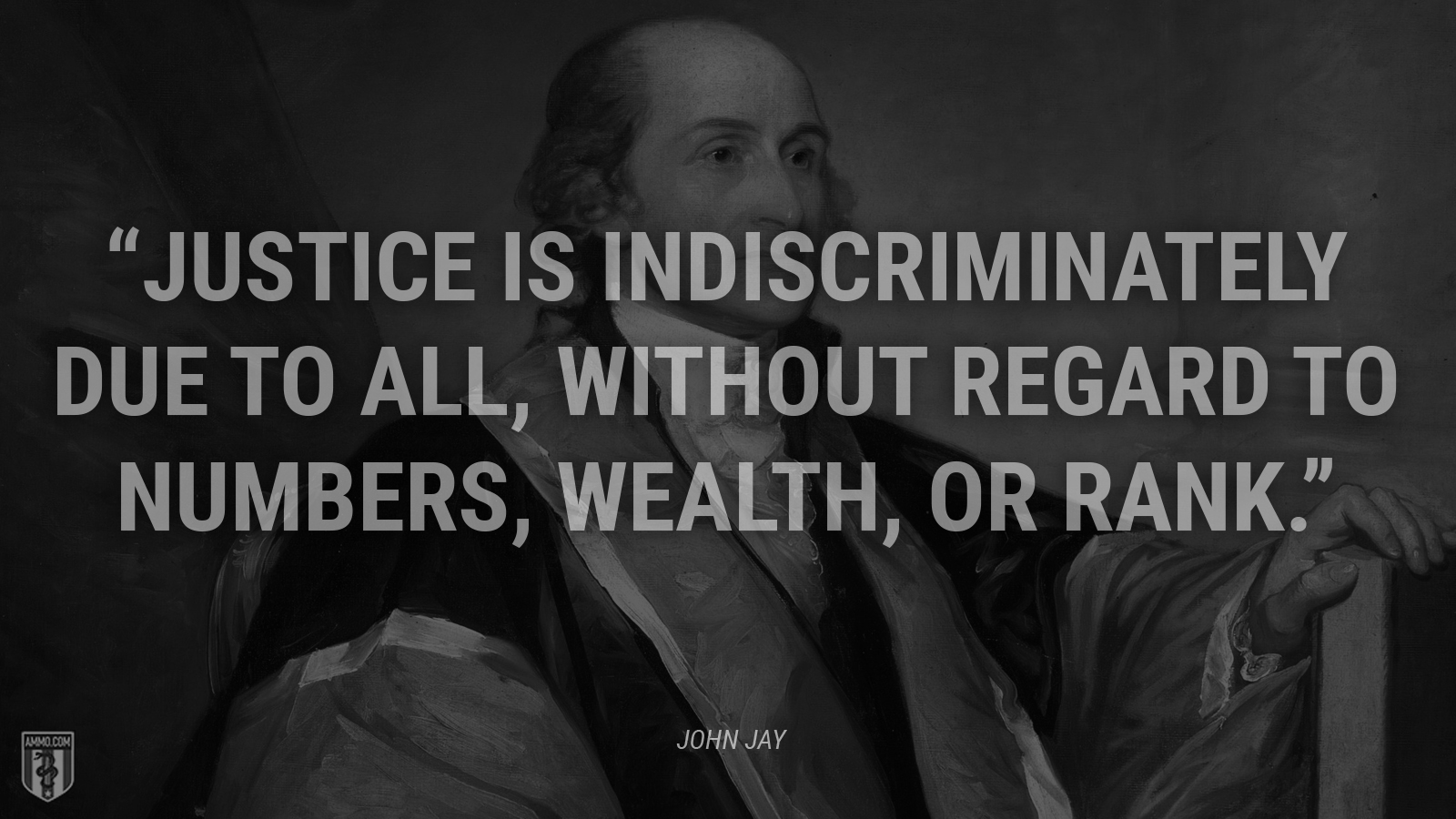 “Justice is indiscriminately due to all, without regard to numbers, wealth, or rank.”

“It is better to toss up cross and pile [heads or tails] in a cause than to refer it to a judge whose mind is warped by any motive whatever, in that particular case. But the common sense of twelve honest men gives still a better chance of just decision than the hazard of cross and pile.”

“Equal and exact justice to all men...freedom of religion, freedom of the press, freedom of the person under the protection of the habeas corpus; and trial by juries impartially selected—these principles form the bright constellation that has gone before us.”