Founding Fathers Quotes on the Importance of Physical Health and Exercise 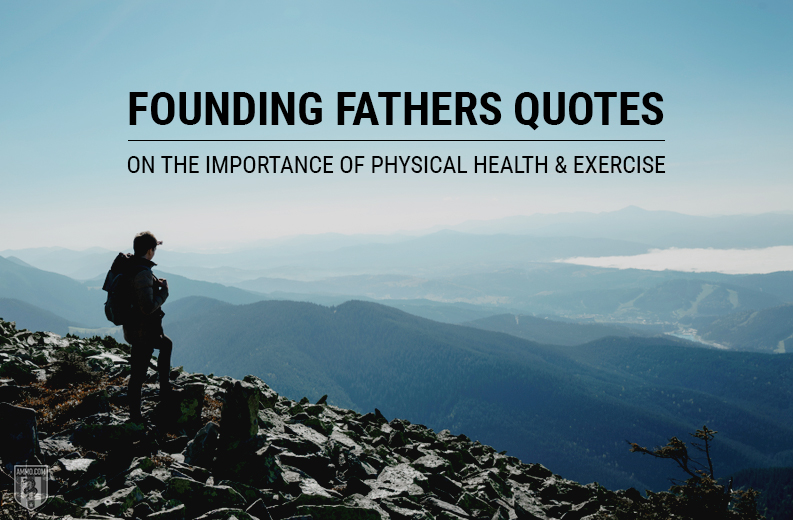 The Founding Fathers were not just polymaths and classical scholars – they were also men deeply invested in physical culture as well as mental. The mind and the body were not seen as being in opposition to one another. On the contrary, a fit body was seen as necessary for a fit mind. To that end, they prioritized regular exercise and healthy habits. Much of Benjamin Franklin’s writings are about how to cultivate a balance between both, despite the fact that Franklin was no paragon of physical health.

Jefferson wrote extensively on this subject as well, believing that a man could not be fully virtuous unless he was also physically fit. In our era, physical fitness is an act of resistance against corporatist and big government power who seek a helpless, pliant population entirely reliant upon them for assistance. Taking control of your physical health will only serve the purpose of making you more independent. 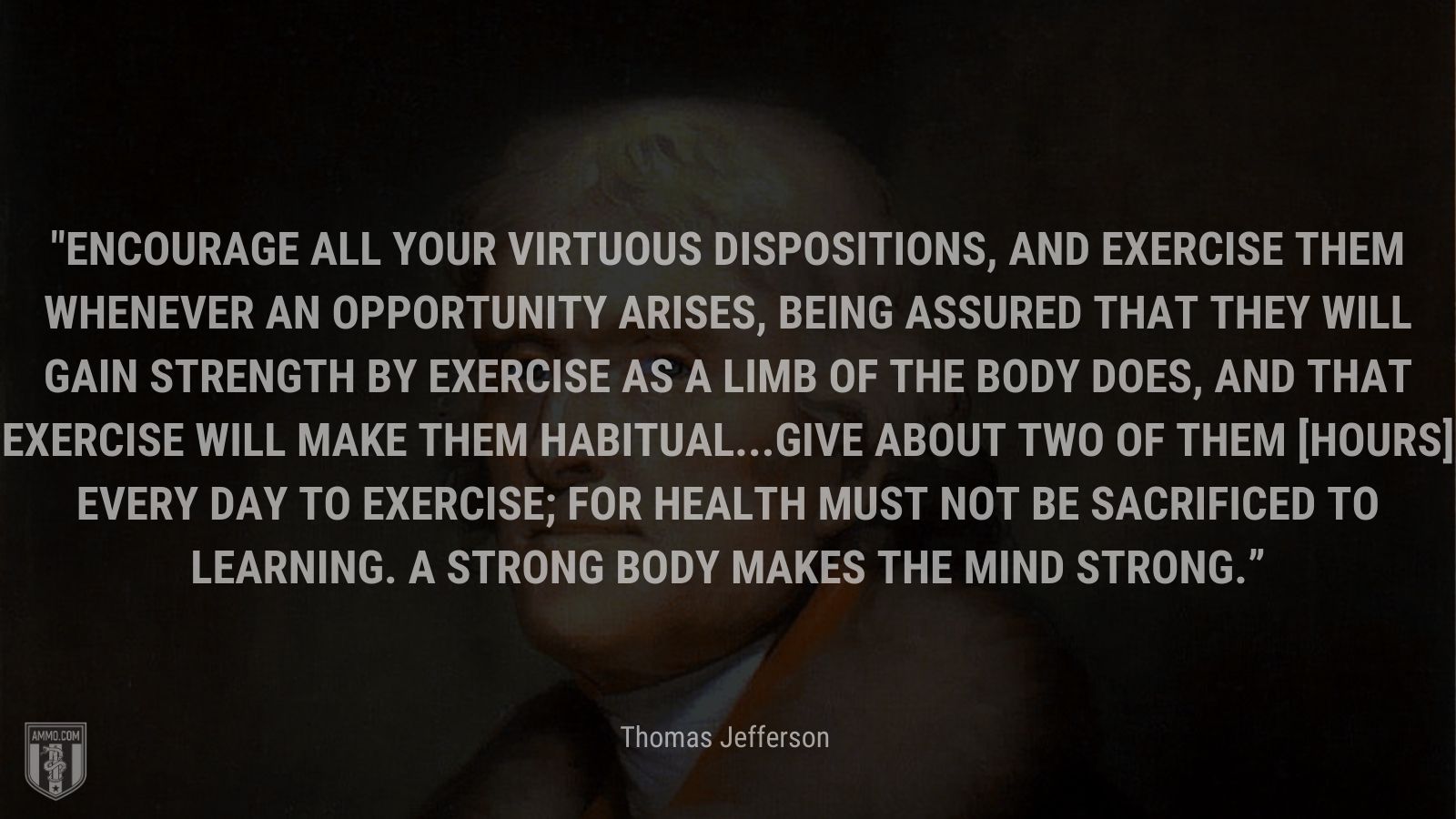 “Encourage all your virtuous dispositions, and exercise them whenever an opportunity arises, being assured that they will gain strength by exercise as a limb of the body does, and that exercise will make them habitual...Give about two of them [hours] every day to exercise; for health must not be sacrificed to learning. A strong body makes the mind strong.” 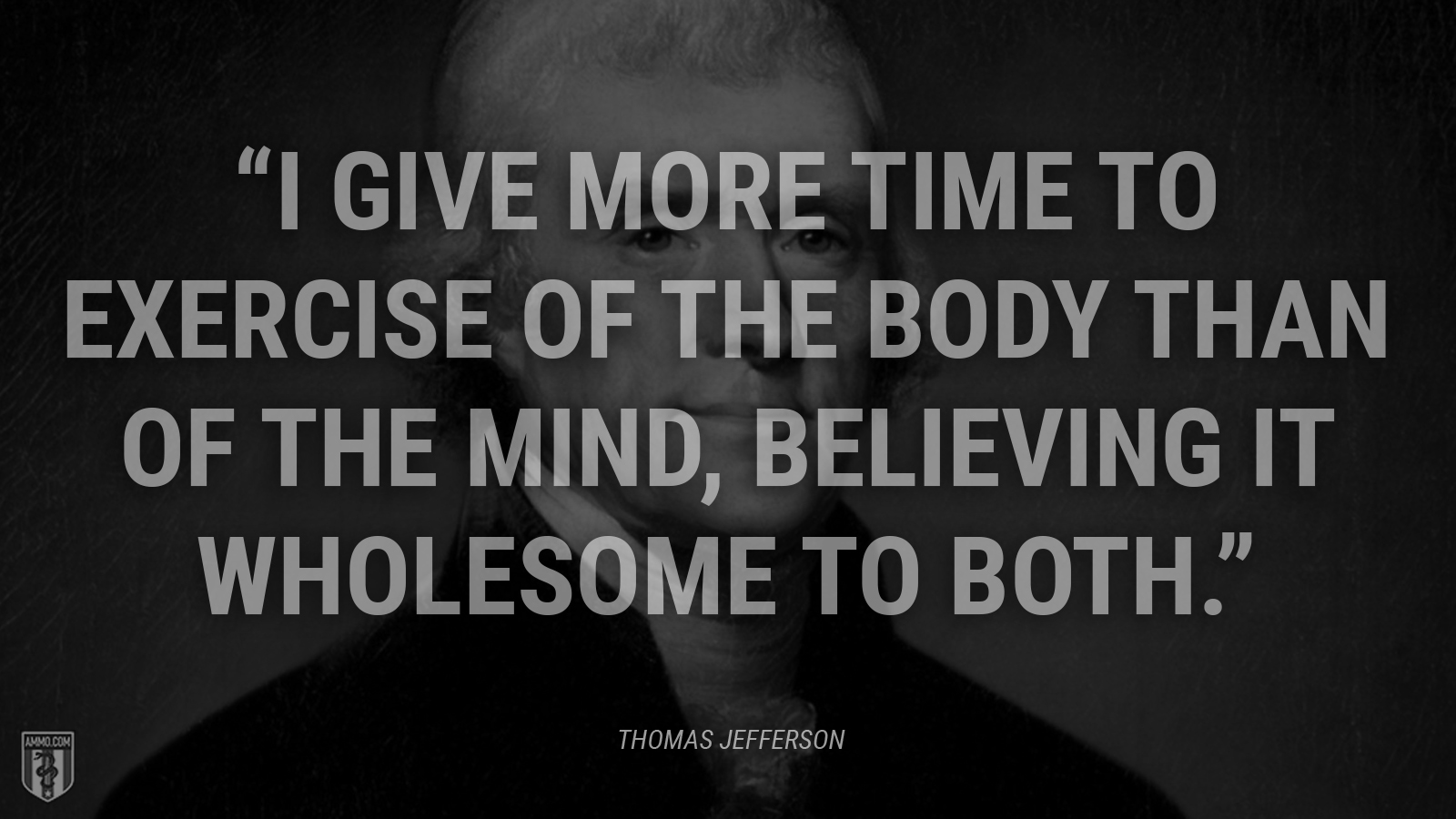 “I give more time to exercise of the body than of the mind, believing it wholesome to both.” 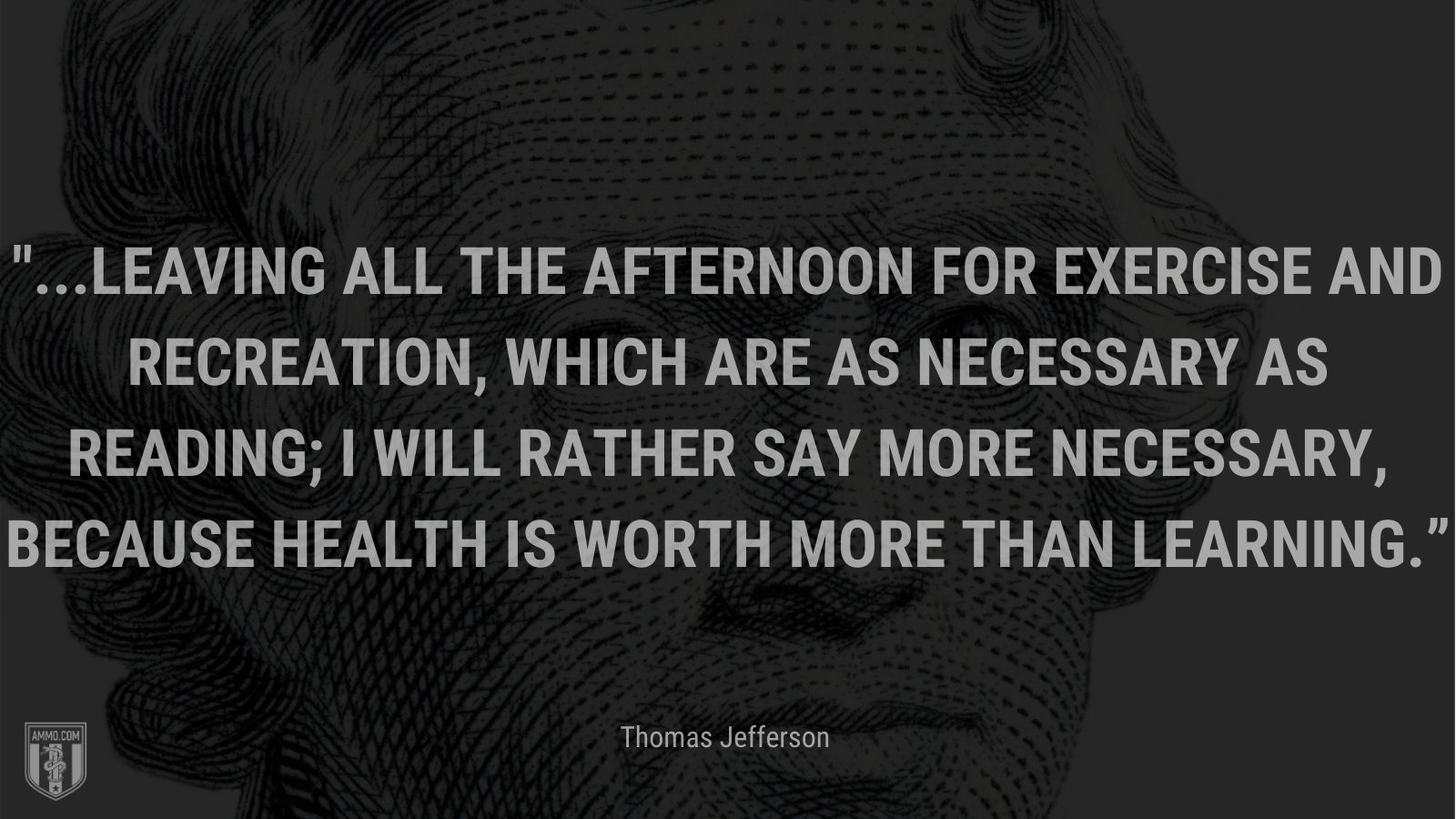 “...leaving all the afternoon for exercise and recreation, which are as necessary as reading; I will rather say more necessary, because health is worth more than learning.” 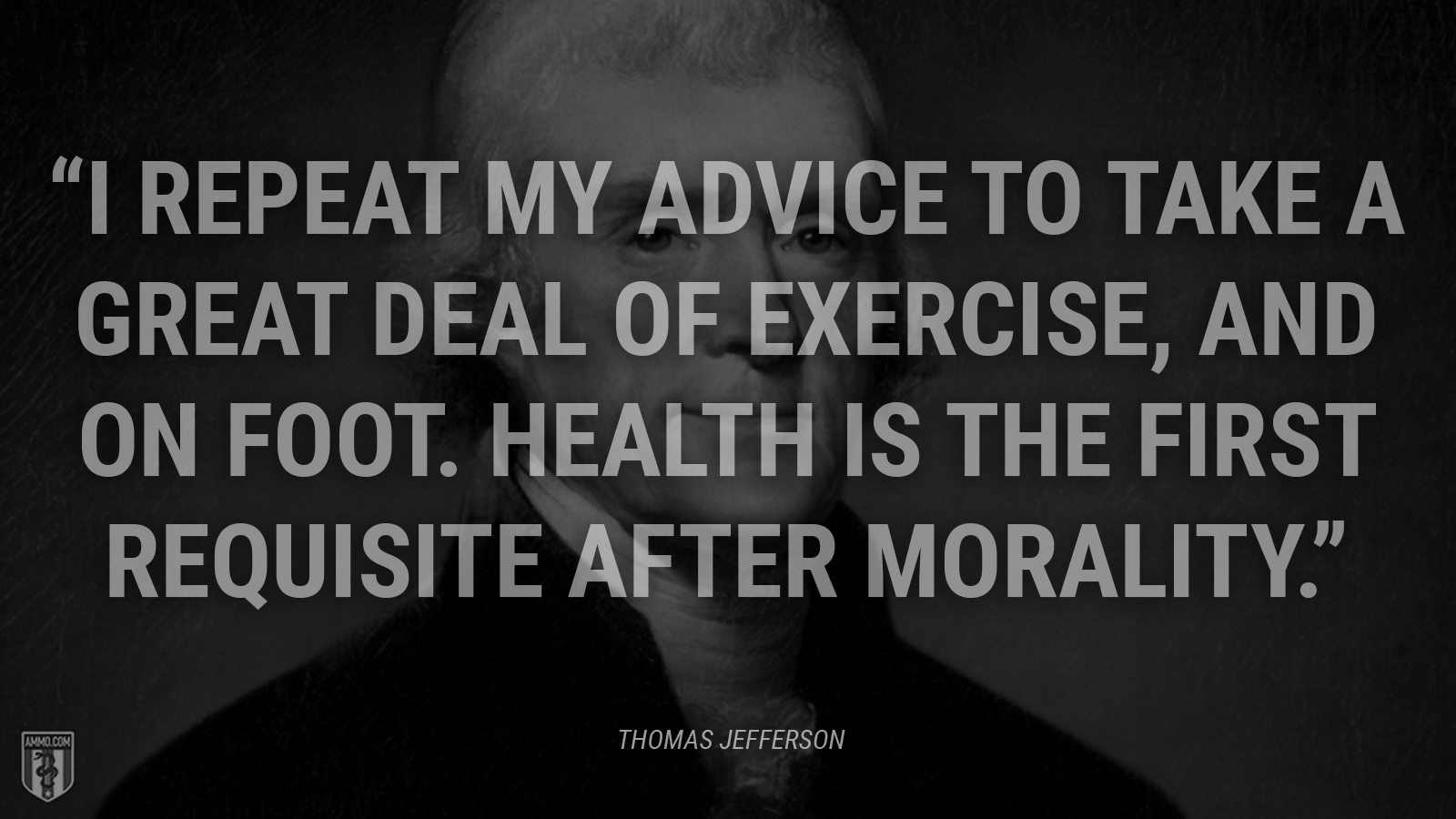 “I repeat my advice to take a great deal of exercise, and on foot. Health is the first requisite after morality.” 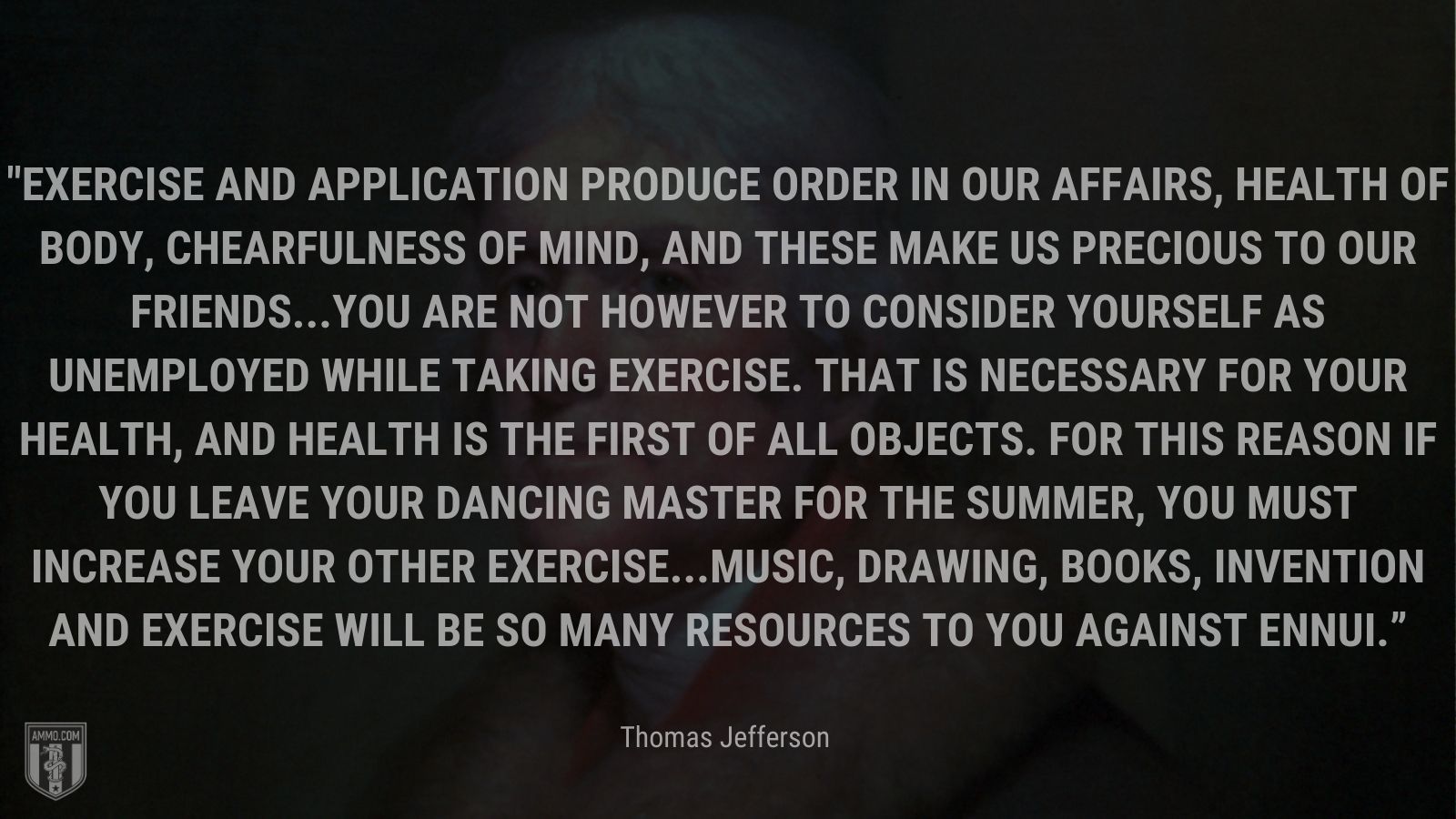 “Exercise and application produce order in our affairs, health of body, chearfulness of mind, and these make us precious to our friends...You are not however to consider yourself as unemployed while taking exercise. That is necessary for your health, and health is the first of all objects. For this reason if you leave your dancing master for the summer, you must increase your other exercise...Music, drawing, books, invention and exercise will be so many resources to you against ennui.” 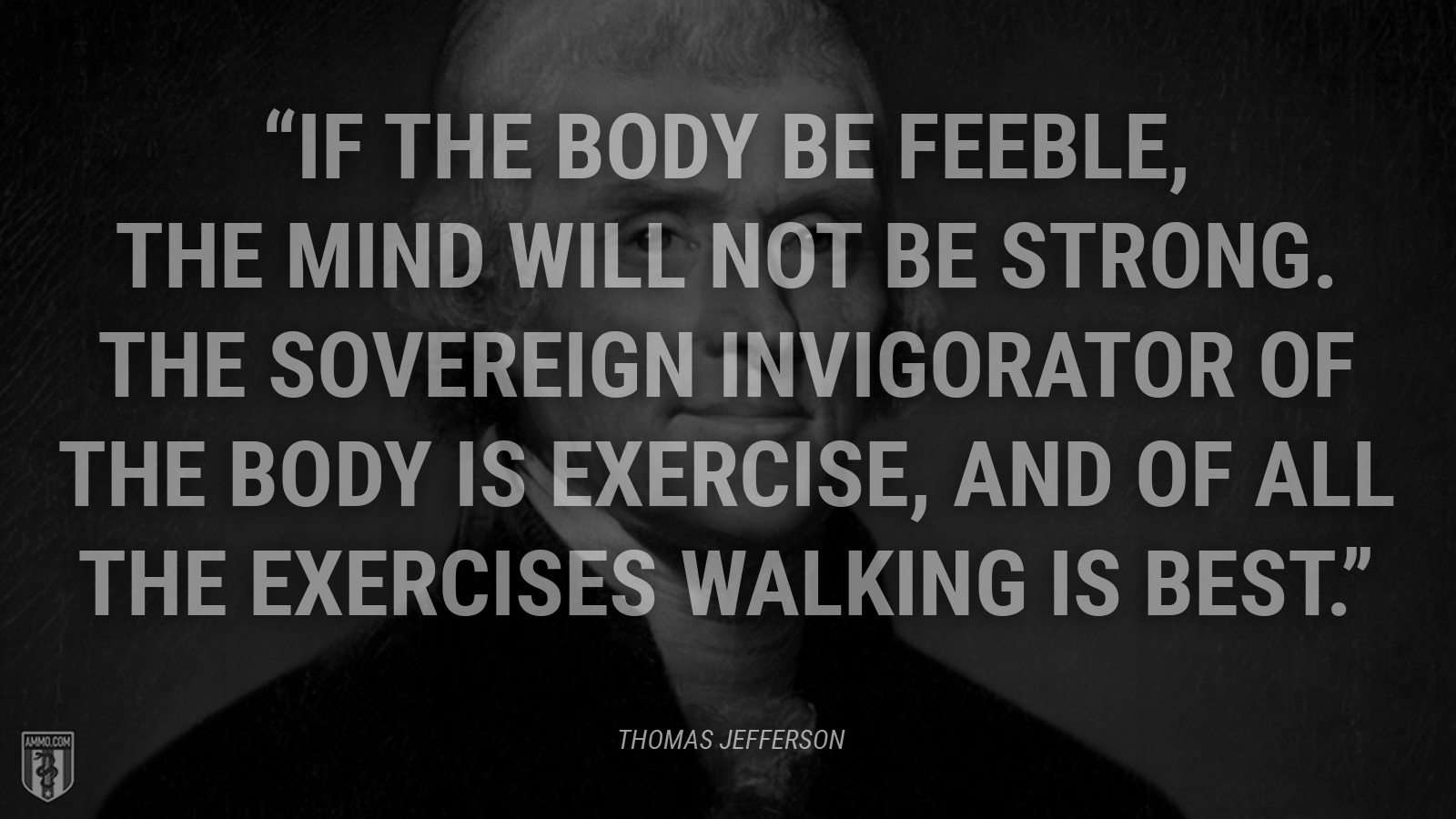 “If the body be feeble, the mind will not be strong. The sovereign invigorator of the body is exercise, and of all the exercises walking is best.”