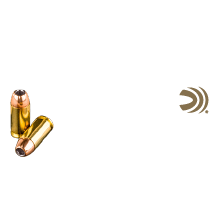 When the FBI developed the 40 S&W in 1990, the 40 S&W ammo Federal provided quickly became commonplace in law enforcement around the nation. Federal 40 cal ammo for self defense is highly respected across the globe as numerous agencies adopted it for their carry guns.

There’s no denying that you’ve got several options for Federal 40 cal ammo for practice. Federal 40 S&W American Eagle is the affordable and reliable full metal jacket (FMJ) ammo you need to hone your marksmanship skills. For indoor ranges, there’s Lead Free Federal 40 S&W that will meet your local range’s requirements.

For the competitive shooter, there’s Syntech Action Pistol Federal 40 cal ammo. As the official ammo of the USPSA, Federal 40 S&W Syntech will meet all the FPS and power level requirements as well as hosting a total synthetic jacket that prevents metal on metal impacts. Syntech Federal 40 ammo also comes in a host of different colors to meet all your chromatic needs.

However, one of the things Federal 40 cal ammo is most well-known for is self defense. When your life is on the line, turn to the brand that law enforcement trusts with their lives, Federal 40 S&W Hyrda-Shok and HST personal defense rounds.

Since its release in 1989, Federal Premium Hydra-Shok jacketed hollow points have been the benchmark by which all other JHP ammo is measured. And Federal 40 S&W Hydra-Shok ammo holds true to this legacy with consistent, reliable expansion that is preferred by numerous self-defense instructors.

The other extremely effective personal defense round in the Federal 40 S&W arsenal is their HST jacketed hollow point line. Developed for extremely reliable penetration, expansion, and near 100% weight retention through barriers, Federal 40 S&W HST ammo is the top choice of multiple law enforcement agencies for their duty personnel. Manufactured with strict requirements, HST Federal 40 ammo provides superior performance in the FBI testing protocol without over penetration.

When your life is on the line, you should always reach for the ammo that the professionals trust theirs to. And that ammo is Federal 40 S&W Hydra-Shok and HST. When seconds count and you need a handgun round that is reliable, consistent, accurate, and powerful, then Federal 40 cal ammo will always have your back when you need it most.

Get your bulk Federal 40 S&W ammo here at Ammo.com for all your shooting needs. We ship fast in a discrete, unmarked package direct to your door so you are always locked and loaded with Federal 40 cal ammo!