For press inquiries related to the data below, please contact Alex Horsman via email at alex(at)ammo.com. For all other inquiries, the fastest way to get a response is here - seriously. Our team is working non-stop to keep up. New inventory is added to our website as soon as we can check it in. Thanks for your patience at this time of stress for all of us. 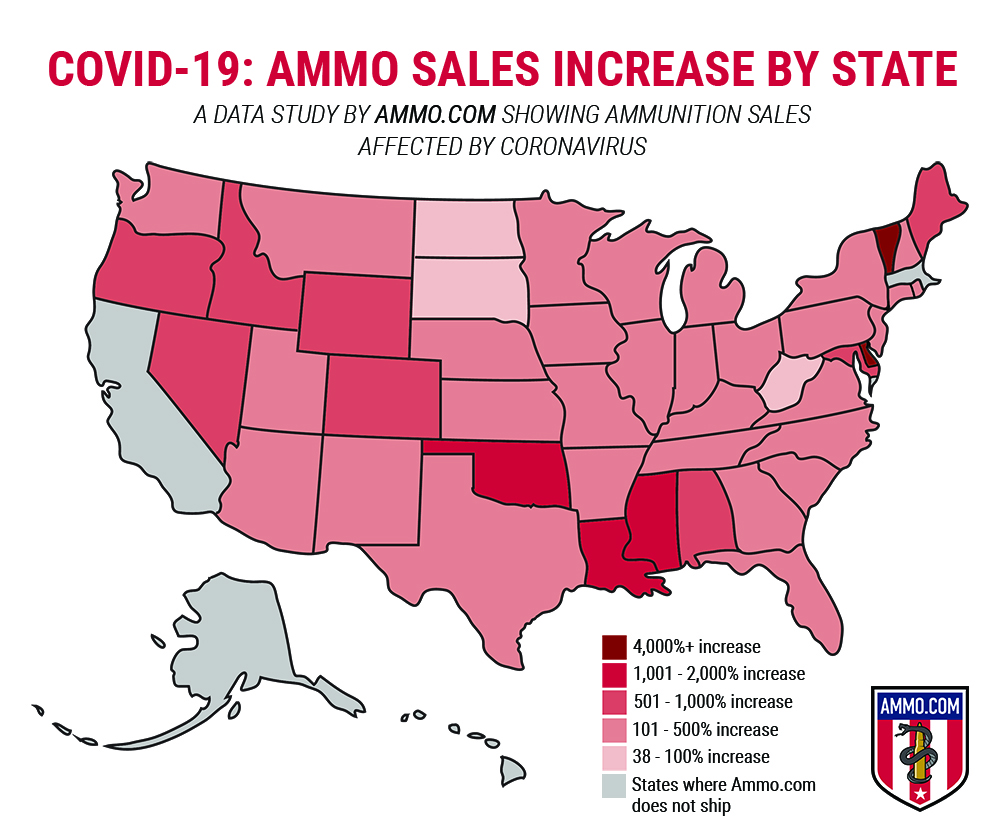 Updated May 31, 2020: According to the Bureau of Economic Analysis (BEA), consumer spending drove about 70% of the U.S. GDP in 2019. Where this money goes is another story. As Visual Capitalist's Iman Ghosh notes, in the first and second quarters of 2020, the COVID-19 pandemic has initiated a transformation of where consumers spend their money in lieu of widespread shelter-at-home orders.

Here at Ammo.com, our growth in sales has directly correlated with the public’s increasing leeriness of COVID-19.  Starting on February 23, sales began to increase as the search term “coronavirus” gained traction, according to Google Trends. This increase in sales over the past 100 days has continued as follows:

State-by-State Breakdown of Ammo Sale Increases Due to Coronavirus

The table below lists the top 10 states by total sales volume from February 23rd onwards, and their corresponding percentage increase in sales volume when compared to the previous time period. Here is how to interpret that data:

Scroll down for a comprehensive breakdown of the effect COVID-19 has had on our recent sales from February 23rd onwards.

Note: Due to city and state laws, Ammo.com does not ship ammunition to Alaska, Hawaii, Massachusetts, California, Washington, D.C., New York City, or Chicago. These jurisdictions, along with a handful of other states, have been excluded from the table above.

What's Been Driving The Increase in Ammo Sales?

There’s no doubt that this increase in sales has been, to some degree, spurred on by alarmist voices in the mainstream media, many of whom have gone out of their way to stir up fear and paranoia in the wake of the COVID-19 outbreak. Both in normal times and in preparation for an emergency, however, there are a number of reasonable reasons to own a firearm.

Below we cover the history of American quarantines, the cultural underpinnings to America’s widespread fear, how to discern between rational fear and irrational panic, and Washington’s unexpected role in heightening this fear. The following was originally written on April 1st, when there were 261 million Americans in 31 states, 82 counties, 18 cities, the nation’s capital, and Puerto Rico under a shelter-in-place order or something similar.

A Brief History of American Quarantines

The COVID-19 quarantine is not the first quarantine that America has endured. However it is arguably the first during a time of the modern mass media, most of which has done absolutely nothing to assuage people’s fears. Quite the opposite, at every step of the way, certain influential voices in the press have sought to inflame people’s quite reasonable fears into a totally irrational panic. This panic has then been monetized for pageviews (and, to a much lesser extent, newspaper sales and advertising). And while some have taken a more measured tone, between a Pollyanna-ish burying of the head in the sand (“it’s just the flu”) and the kind of scaremongering we talk about below, the measured voices in today’s press have all too frequently been drowned out by those profiting from panic.

The primary law regarding quarantine and public health emergencies in the United States is the Stafford Disaster Relief and Emergency Assistance Act. However, rather than being a federal power grab, the bill encourages state and local disaster relief with an emphasis on the federal government providing financial and material assistance. Most critiques of it come from those who do not feel that it gives the federal government enough power.

Ironically, the first state-backed quarantine in the United States predated the country's founding: It was in New York City in 1663, due to an outbreak of smallpox. This and other early quarantine efforts were more about containing the sick than preventing the healthy from going outside and getting the disease. This was what was behind the construction of sickhouses like The Pest House in Concord, MA.

New York was the center of a number of early state-enforced quarantines, including a cholera outbreak in early June 1832, when then-Governor Enos Throop called an emergency session of the state legislature to quarantine the region around the Canadian border. The mayor of New York, Walter Browne, quarantined all products and people arriving from Europe and Asia. The island where “Typhoid Mary” was held in quarantine is now completely void of human life, overtaken by Mother Nature.

There were widespread quarantines and cancellations of large events during the Spanish flu pandemic after World War I. Many municipalities enforced wearing masks in public. Since then, there have been very few mass quarantines. The only notable one was in response to a potential smallpox outbreak in 1963.

Why Are People So Afraid?

People have been right to be afraid – the coronavirus can be deadly, even among young people, and even among those with no pre-existing or underlying conditions. However, the loudest and most dominant currents in the media have certainly been stoking fears beyond what is appropriate, drowning out precisely the more measured, well-informed voices that we have needed.

We have written about a similar phenomenon elsewhere: Known as the principle of “if it bleeds, it leads” – sensationalist sectors of the media play up fears about so-called “mass shootings,” while selectively ignoring some of the facts. Certain members of the press use these tragedies to push their anti-gun agenda. Similarly, despite legitimate health concerns, certain segments of the media have used the fear of coronavirus to work for greater government control of our lives overall.

Another similarity to the mass shooting panic is the attempt by parts of the media to mock those who have been attempting to prepare and protect themselves. “What are these rubes going to do? Shoot the virus?” asks the same self-appointed “experts” who have had you worried that you could starve to death. An excellent example of this mindset is displayed in this article from the BBC.

Much of this cuts to the heart at the difference between rational fear and planning versus panic and hysteria. While there’s a chance you've been to the supermarket and seen all the toilet paper, eggs and milk sold out, no one has suggested that the supply chain is breaking down or that we are looking at any kind of shortage of food.

Everyone has to make their own decision about how much fear is rational and what begins slipping into paranoia. However, certain voices in the media have been demonstrably going out of their way to make people afraid of things that aren’t being suggested as probable, let alone possible.

There has been another sector playing a role in driving fear: The federal bureaucracy, as well as NGOs and state government organs. The logic of this is simple: no one wants to be seen as underreacting. There are two reasons for this. First, when it comes time to redistribute those sweet, sweet budgetary dollars, no one wants to be the agency who’s getting asked, “Why should we give you more money – or even the same amount – when you barely reacted to such and such a crisis?”

Because expertise is no longer as prized as it used to be, everyone considers themselves an armchair quarterback. So to avoid public outcry, government agencies would much rather overreact than underreact. No one wants to be the one who “didn’t do enough.”

The second is one of public perception tied closely to the first. The American public expects everything to be incredibly “safe.” We are psychologically unprepared for there to be a problem like coronavirus, for which there is precious little that can actually be done. Americans are obsessed with a nebulous notion of “safety” that has been actively promoted by hysterical members of the media as well as lawyers who profit from a litigious society.

Tangentially, but no less important, has been the spectre of fear raised by welfare programs and the public schools. There is a non-trivial portion of Americans who believe that some group of people (often whites or “the rich”) “owes” them something. This can be seen in most debates about publicly allocated funds, including but not limited to EBT, Section 8 housing, and the debate around reparations. There are entire departments of major universities in the United States (usually anything ending in “Studies”) centered around the cultivation of grievances.

What, many thoughtful Americans ask, will these people do if there is a breakdown in public or even a slight delay in the deliverance of entitlements? Imagine EBT going down for a week. What will the allegedly aggrieved parties do? Who might they attack? For many, the Los Angeles Riots and the post-Hurricane Katrina looting come to mind. When large numbers of people are afraid of where their next meal might come from, things can quickly turn ugly.

All of this ties closely into social anxieties about atomization and the breakdown of civil society.

So what is the solution? Remain calm, but prepare. There is precious little chance that martial law is coming. Why, after all, would an administration obsessed with the Dow Jones not want everyone back at work and spending money like good little consumers? But you might have had a couple weeks where trips to the grocery store are impractical, difficult or impossible. Marauding bands of raiders are unlikely, but with thousands of violent criminals released early, it continues to be reasonable to take steps toward protecting yourself and your family.

Like most things, preparing for unforeseen events is about finding a balance. Find out what you’re actually afraid of happening that is in the realm of the possible. Then take reasonable steps to prepare for that.

But always make sure you have enough ammo.

Our team has been working around the clock to try to keep up, as things have been pretty wild in the ammo world lately. While we always strive to provide the best customer service and shopping experience possible, we've been overwhelmed. Instead of same-day shipping, it’s taking an average of two to three business days to completely process, package, and ship items.

Thank you for your patience and understanding at this time of stress for all of us. We appreciate your support and will continue working tirelessly for your satisfaction.