The Best 17 HMR Ammo for Varmint Hunting and Plinking 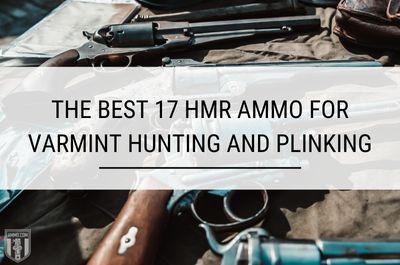 The 17 HMR is the newest rimfire cartridge that has quickly gained a following amongst target shooters and varmint hunters.

17 HMR accuracy is second to none at 200 yards, thanks to its flat trajectory and minimal recoil, which will give any small game animal nightmares.

Due to its small size, the 17 Hornady Magnum Rimfire has limited hunting and long-range capabilities.

However, choosing the best 17 HMR ammo will help you maximize the potential of your 17 HMR target and hunting rifle.

For target shooting, we recommend CCI 17 HMR 20-grain FMJ because they're reasonably priced, cycle reliably in a bolt-action rifle, and are highly accurate.

When hunting small critters like raccoons, prairie dogs, and other varmints, we've found the best 17 HMR round to be Hornady 17 HMR 17-grain V-MAX due to its high muzzle velocity, reasonable price, and the V-MAX bullet.

Best 17 HMR Round for Varmint Hunting 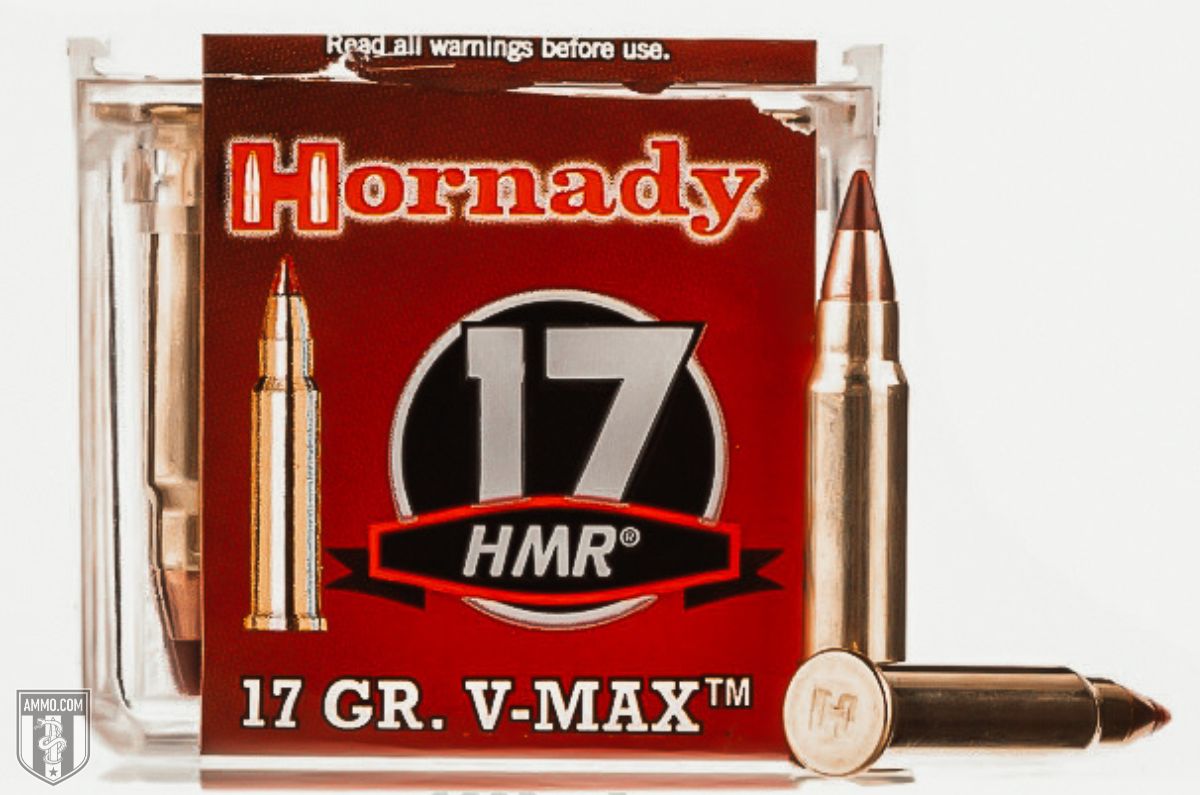 Hornady is the company behind the 17 HMR, so they should manufacture the best ammo for it. Also, Hornady is a brand trusted by many shooters of various calibers because they make high-quality ammo.

The price isn't the lowest, but it's reasonable considering the ammo quality. The biggest drawback is that so many people stock up on these rounds it's often difficult to find.

If you're planning to go varmint hunting and most of the prairie dogs or coyotes are right around the 200yd mark, then you'll be shooting a bullet with a flat trajectory, which means better accuracy.

The polymer-tipped V-MAX bullet is one of the best hunting bullets on the market, which is why you see several ammo manufacturers using this bullet. 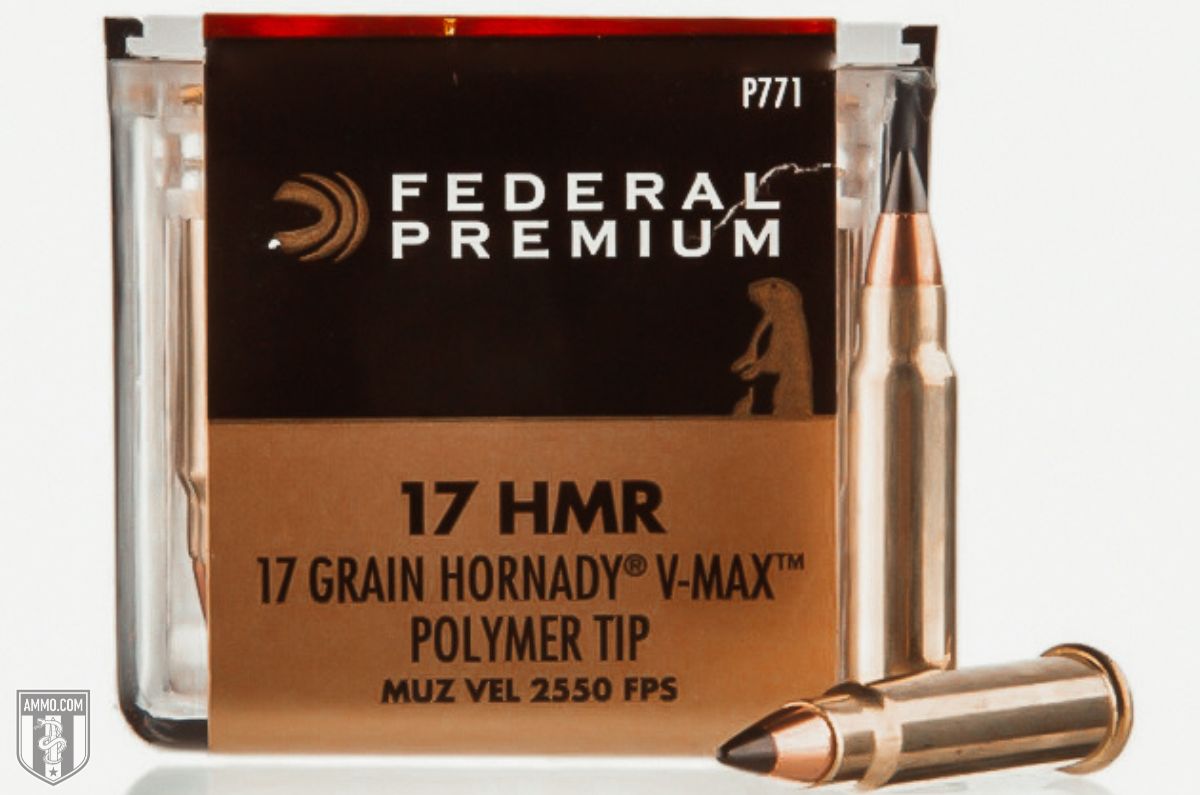 The Winchester 17 HMR 15.5gr Polymer-Tipped is a lighter bullet so that the wind will affect it more, and it's more expensive. However, I especially like that these bullets are lead-free, so you don't risk accidentally lead-poisoning other animals that might come across your bullet that's been fired.

The lighter 15.5gr bullet would be an excellent choice for squirrel hunting, as it's less likely to damage the meat.

Federal 17 HMR 17gr Polymer-Tipped is a favorite of many varmint hunters because of its consistency. Federal Premium produces high-quality ammo that competes on price, velocity, and accuracy.

Winchester 17 HMR 20gr JHP is the best 17HMR ammo for coyote hunting because the bullet is a little heavier, so it will pack more of a punch than lighter bullets. However, in recent years, many shooters have noticed the reliability of Winchester ammo decline. 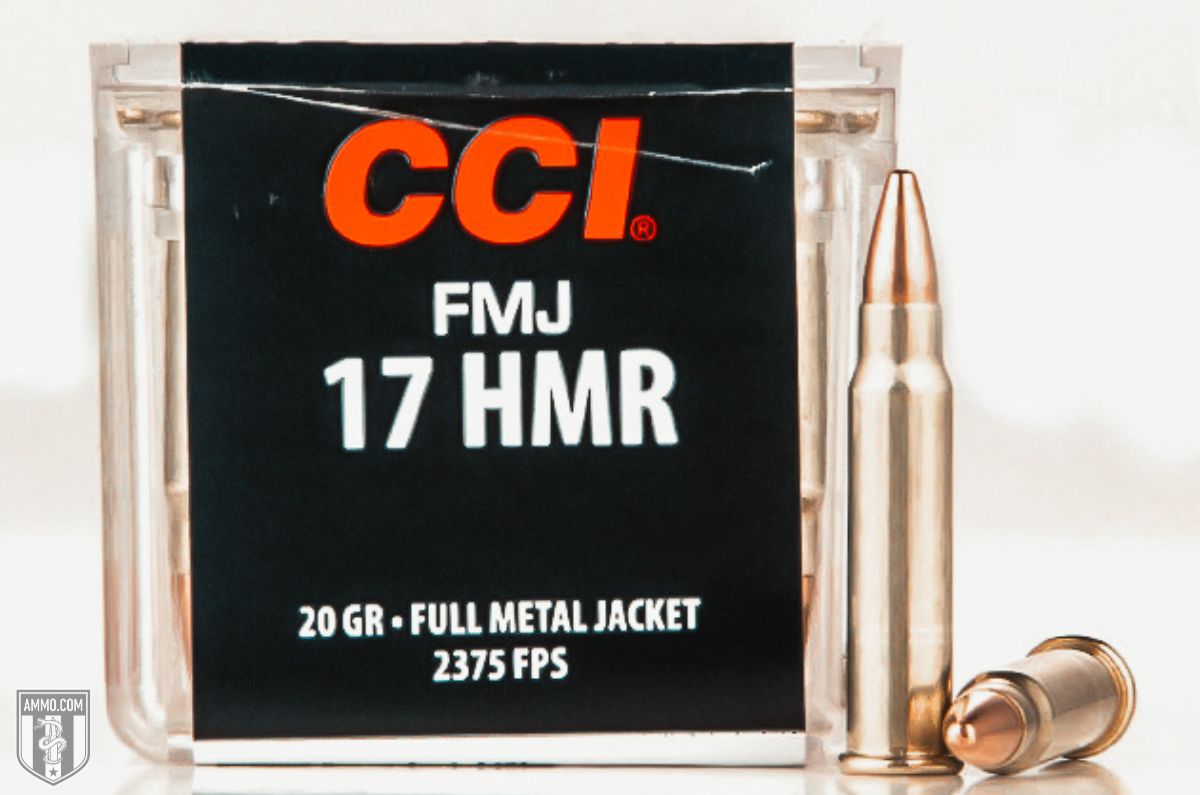 The full metal jacket (FMJ) 20-grain bullet resists wind drift slightly more than lighter bullets, but all 17 HMR bullets are prone to wind drift because they're so lightweight.

CCI is a trusted brand in the rimfire cartridge space, and they make reliable ammo that feeds well into most firearms.

Because the bullet is heavier, you'll see the velocity is slightly slower, but these rounds are still very fast, which helps maintain the flat trajectory out to 200yds; the 17HMR is known for in most instances.

CCI is proud of its ammo, and that's also reflected in the price. Although rimfire ammo is relatively cheap, these rounds are on the higher end of 17 HMR ammunition.

Firearms manufacturers such as Savage Arms used the CCI 17 HMR 17gr Polymer Tip for testing when they developed the Savage A17, and it's still what is recommended by Savage to be used in their firearms.

Due to the lighter 17gr bullet, the muzzle velocity of these rounds is clocked at 2,650 fps, much faster than the 20gr FMJ from CCI.

These are also excellent rounds for varmint hunting thanks to the polymer-tipped hollow point, so if you plan to go plinking and hunt varmints, you can easily accomplish both when using these rounds.

Which is the Best 17 HMR Ammo for You?

There are so many different ammo options per caliber because each shooter has unique expectations of how the ammo should perform based on their circumstances.

I believe there are three main factors that we all should consider when choosing the best ammo. They are the budget, firearm, and situation you plan to use the gun.

I know this is obvious, but you should always stay within your budget. This is less of a factor for rimfire ammo because, compared to centerfire rounds, it's very inexpensive.

However, it's easy to burn through several hundred rounds at the range, especially shooting a semi-auto rifle, and those rounds begin to add up at nearly $0.50 apiece quickly.

As you try different brands of ammo, you'll notice that your firearm cycles and shoots specific brands and bullets. Pay attention to which ones your gun prefers and stick with those for the best results.

How well your ammo performs also depends on the situations in which you use it. For example, rarely are the best hunting ammo and the best target shooting ammo the same because the manufacturers have two different goals in mind when they make each type.

How to Save Money on 17 HMR Ammo

As ammo prices continue to increase, we, as shooters, are forced to devise ways to save money on ammo.

When it comes to rimfire ammo, it's generally inexpensive, but if you're a serious shooter, you can still rack up a high-dollar ammo bill. So there are a couple of ways to save money on all rimfire ammo, from the 22LR, 22 WMR, and of course, the 17 HMR.

Buying bulk ammo increases the overall price but decreases the cost per round. Most manufacturers will offer a better discount with the more rounds you buy.

The downside to buying bulk is spending a large sum of money upfront.

While reloading isn't possible with rimfire brass, you can handload it to save a little money.

However, it isn't easy to justify handloading rimfire rounds because they're inexpensive, and the time you spend handloading is worth something. Ultimately, it might not be worth it for the average shooter.

There are a few different types of bullets used in 17 HMR ammo, and each has its purpose.

The full metal jacket bullet is most commonly used as in target ammo. It's a lead bullet with a metal shell, typically copper.

These bullets shoot cleaner, so you don't have to clean the barrel as often.

FMJs are less than ideal for hunting or self-defense because they're more likely to over-penetrate, unlike hollow point bullets that mushroom on impact and rarely go through the animal.

The jacketed hollow point is used for self-defense and hunting because it expands on impact just as a traditional hollow point does, but it feeds better in semi-auto handguns and rifles.

Polymer-tip ammo is a JHP with a plastic tip that aids the bullet's aerodynamics without detracting from the bullet's expansion. The Hornady V-MAX bullet is an excellent example of a polymer-tipped bullet.

They're most commonly used in hunting or long-range shooting situations.

The 17 HMR first came out as a rifle cartridge, but it didn't take long for firearms manufacturers to see this round's potential as a handgun cartridge.

There are a few pistols chambered in 17 Hornady Magnum Rimfire. However, most are still a work in progress to get the rounds to feed in semi-auto guns, especially handguns, reliably.

You can now find a plethora of rifles and handguns chambered in 17 HMR. Below you'll find some of the most popular 17 HMR guns. 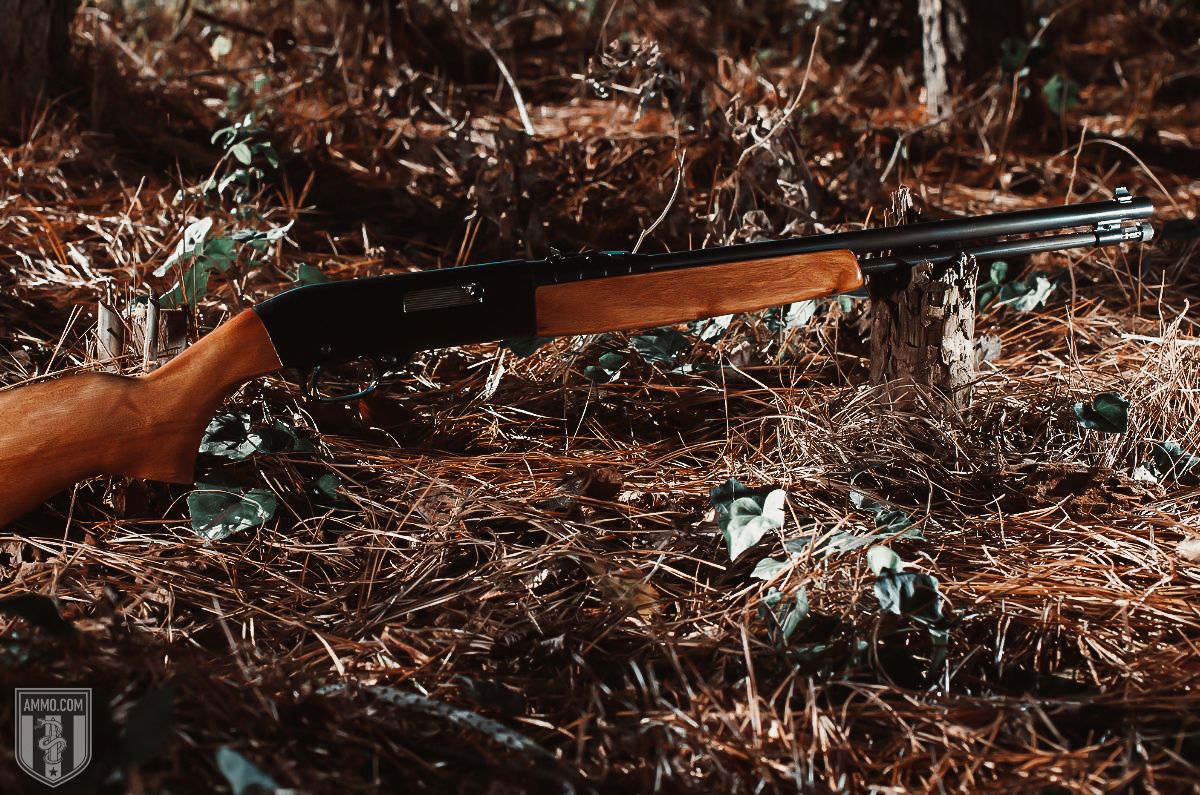 The Ruger Precision Rimfire 17 HMR is a bolt-action rifle featuring a one-piece chassis and a Quick-Fit adjustable buttstock, so it can quickly adapt to most shooters.

The iconic Henery Golden Boy lever action rifle is chambered in 17 HMR, so if you prefer the lever-action classic walnut stock instead of a synthetic stock on a bolt-action, this is the rifle for you.

The Marlin Model XT-17 Bolt Action Rifle is a budget-friendly option for the 17 HMR enthusiast. 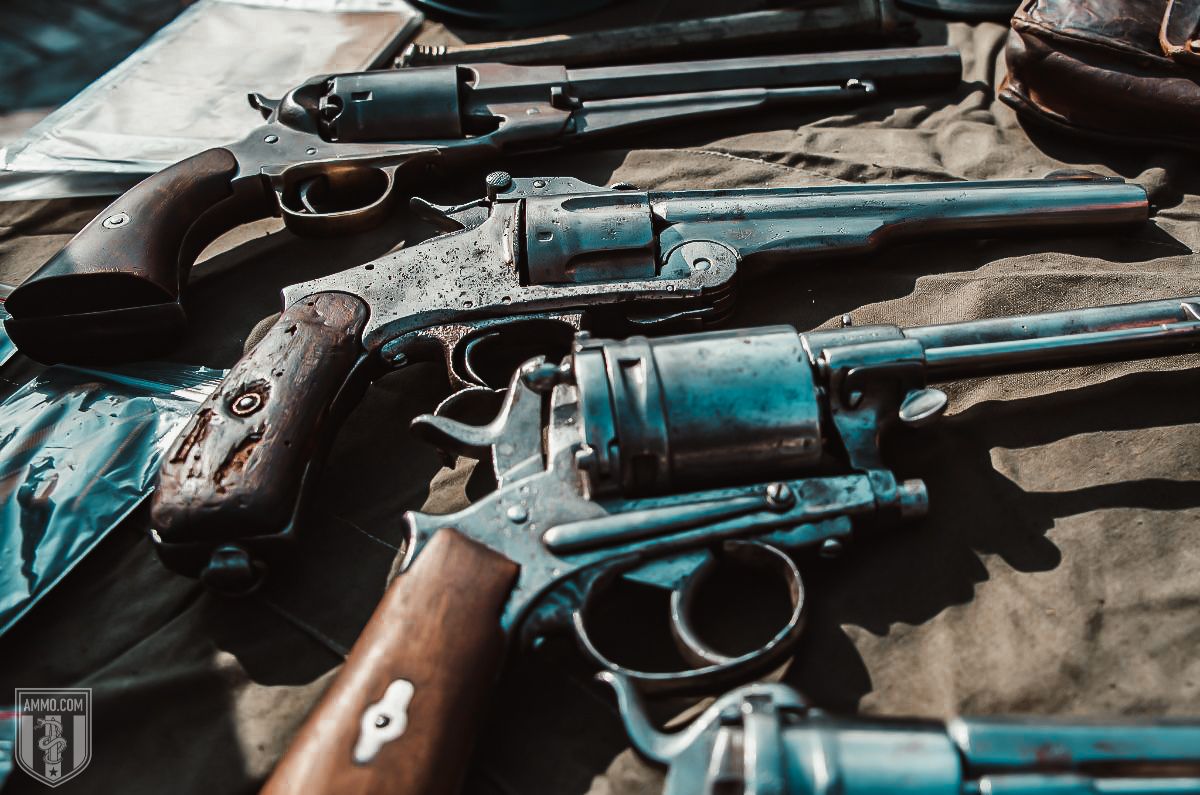 Two of the most popular revolvers chambered in 17 HMR are the Ruger Single Six and the Chiappa 1873. They're both single-action revolvers, with the Ruger being much more expensive than the Chiappa.

While the 17 HMR is limited in its hunting capabilities due to its size, you can still find top-of-the-line 17 HMR varmint hunting rounds, such as the Hornady 17 HMR 17-grain V-MAX, which is more than capable of taking out a coyote or any small game animal.

The best 17 HMR ammo for plinking is the CCI 17 HMR 20-grain FMJ because it's reasonably priced, and the FMJ bullet won't dirty your barrel as quickly as a lead bullet will, so you can spend more time shooting and less time cleaning.