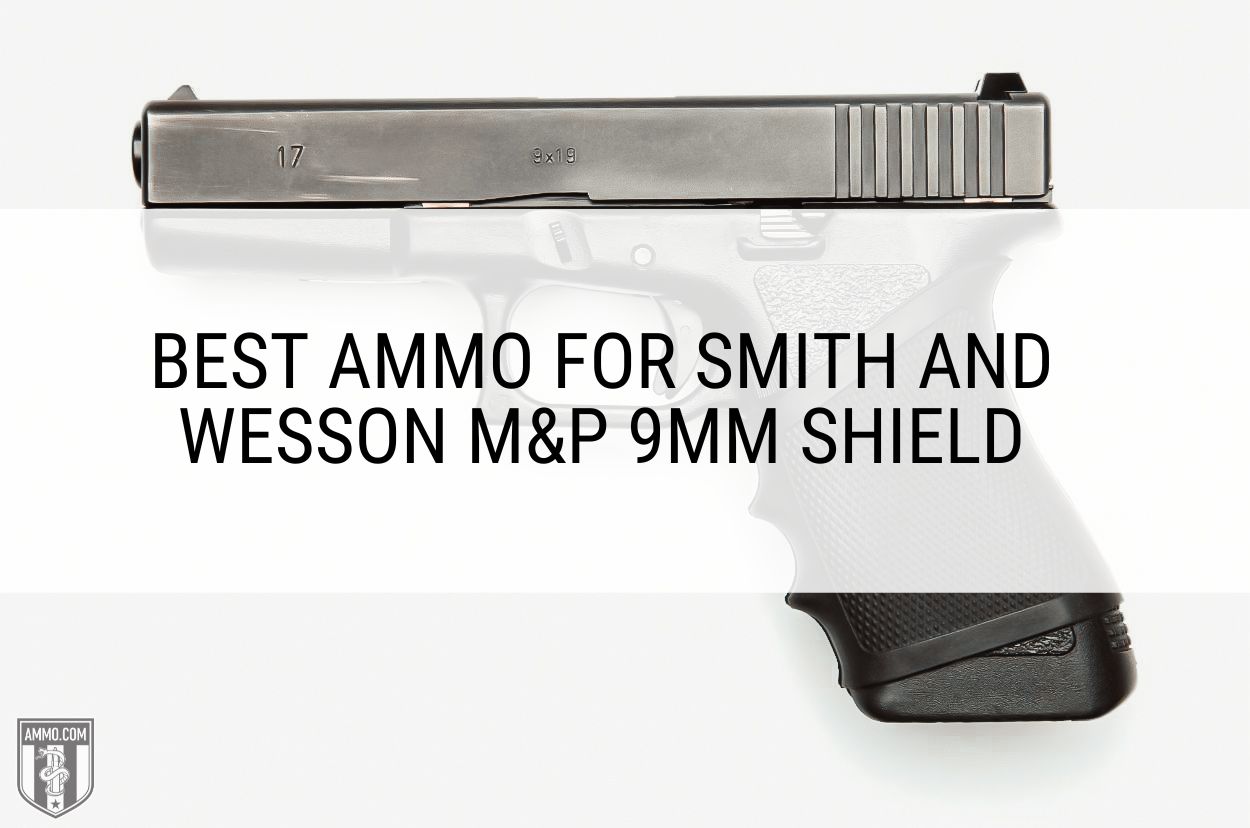 I was eager to discover the best ammo for the Smith and Wesson M&P 9mm Shield because this is the compact pistol I most often use as my concealed carry gun.

I tested many brands and loads at the range, and below is the ammo I have loaded in my Smith & Wesson EDC (Everyday Carry).

I've also ranked the best target 9mm rounds based on price and ballistics. 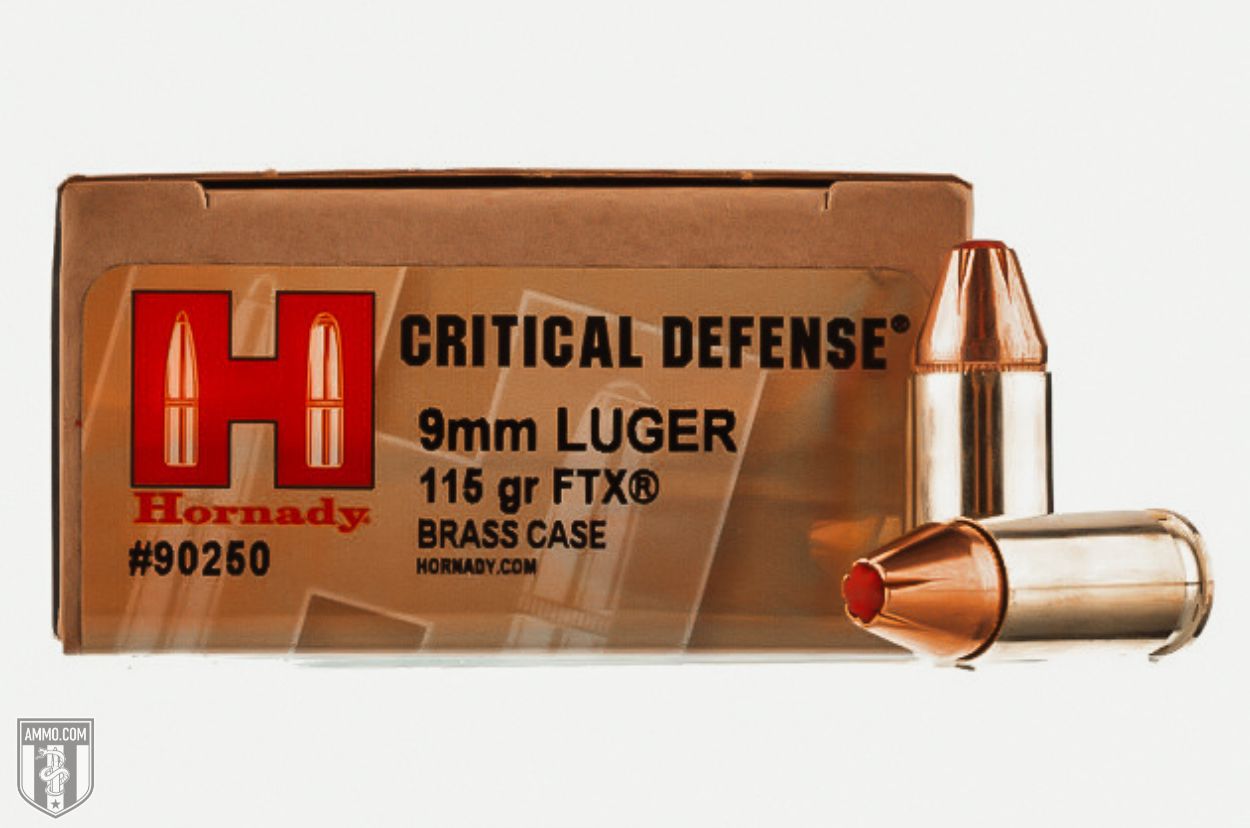 After testing several loads in my Smith & Wesson M&P Shield 9mm, I found Hornady Critical Defense to be the most accurate.

It doesn't matter how fast or hard-hitting the round is if you can't hit the target when it matters most, which is why I use these rounds in my CCW to this day.

I have yet to have a malfunction when shooting these brass cases, which gives me peace of mind because I know I can count on them to fire if I'm ever forced to use them.

Though the Critical Defense rounds don't have the highest muzzle velocity or energy, they are still plenty capable of quickly stopping a threat thanks to the jacketed-hollow point bullet.

The biggest drawback is the price. At well over $1.00 per round, you won't want to practice with this ammo every day.

Countless gun owners trust Hornady's defensive loads to protect their loved ones and themselves. 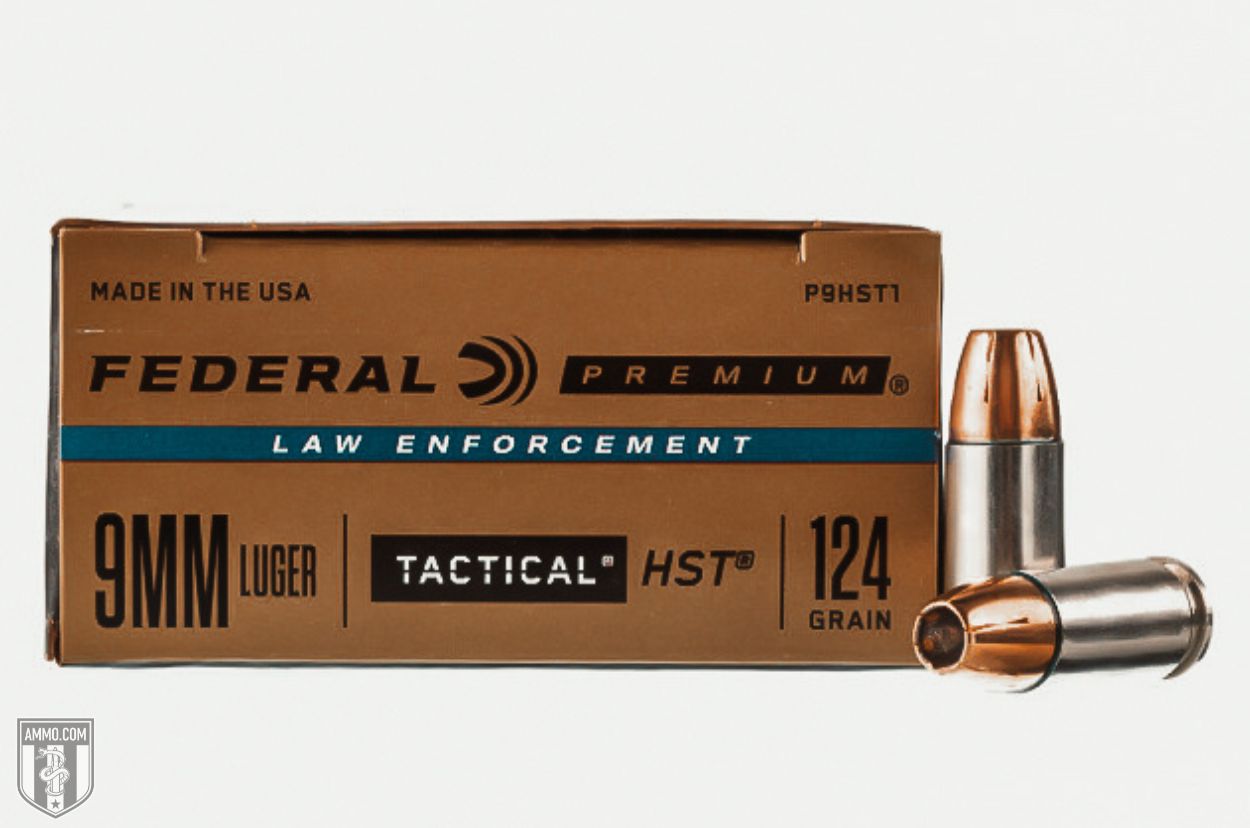 I tested several other rounds that were slightly less accurate (which could have easily been my fault), or they had a little more recoil than I preferred.

But that doesn't mean you shouldn't try them out for yourself.

The Ammo Inc. 124 Grain JHP is priced for any budget, yet these defense rounds have a heavier jacketed hollow point, so you're not sacrificing knockdown power.

Though they're more expensive than your typical target ammo, you'll feel much more comfortable practicing with these rounds because they cost much less than other self-defense loads.

The Federal HST Law Enforcement 124 Grain JHP is less expensive than the Hornady Critical defense but has the heavier grain bullet and nickel-plated brass casing.

The most significant advantage is the nickel-plated brass, as it helps the case flawlessly slide in and out of the chamber of the M&P 9 Shield, so you don't have to worry about malfunctions.

These rounds are also not crazy expensive, so you can practice with them at the range without selling your kidney.

Winchester USA Ready Defense 124 Grain JHP 9mm + P Ammo is for the concealed carrier who needs a little more thump in their life.

These rounds are reasonably priced, fast, and have excellent knockdown power, thanks to them being loaded hotter than traditional defense rounds.

This means they'll have more recoil because there's more powder in each nickel-plated brass casing.

The other main difference between this carry ammo and the Federal HST rounds is the polymer-tipped 124gr bullet of the Winchester rounds. This plastic piece aids in bullet expansion and aerodynamics. 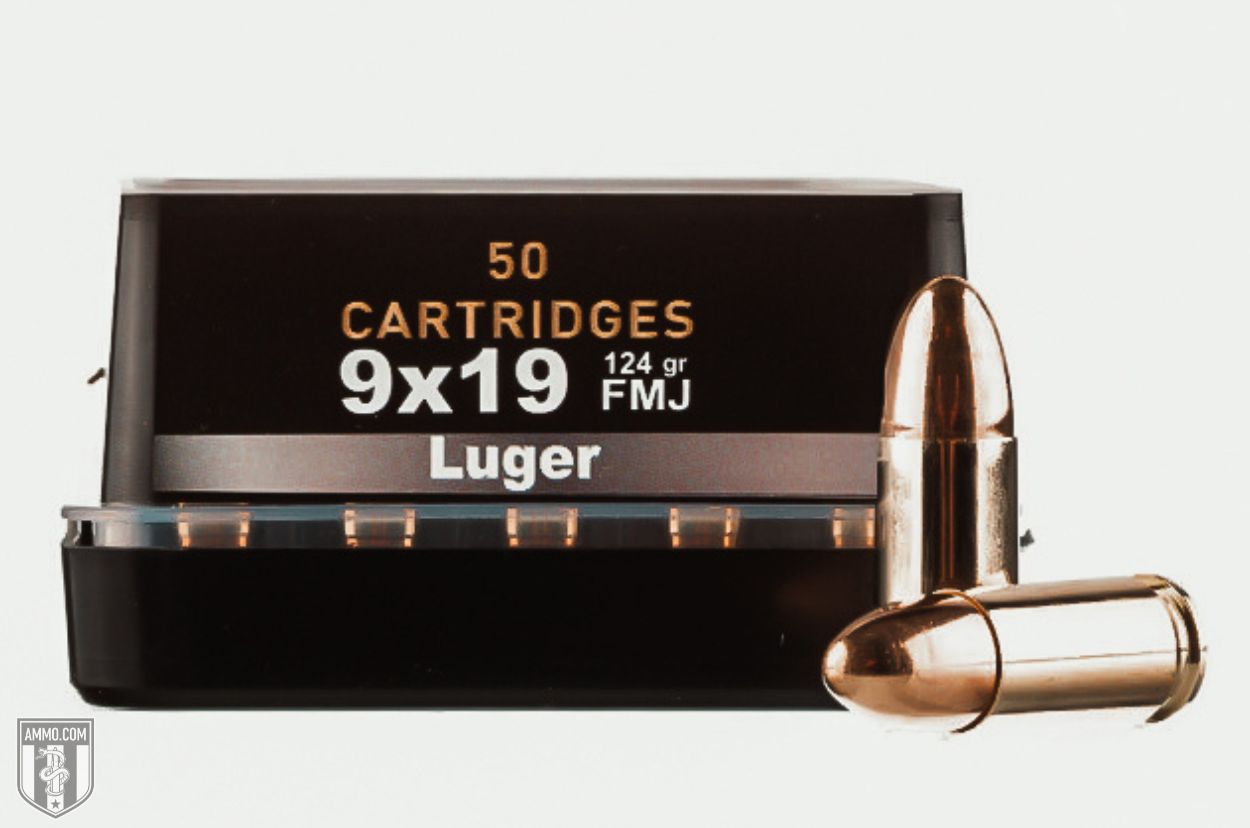 Compared to practicing with self-defense rounds, these loads are CHEAP!

When target shooting, price matters most to me. I shoot inexpensive ammo to visit the range more often and stay longer.

However, when training with my Shield, I use my EDC ammo to get a realistic feel for a self-defense situation. This means I won't use this ammo during training even though it's similar in bullet weight and ballistics to defense loads.

The full-metal jacket bullet makes a much better target bullet than a personal-defense bullet and keeps the price lower while getting exceptional muzzle velocity and energy.

Belom is a lesser-known brand, which might concern some shooters; however, I don't put as much stock in the ammo brand name when fun shooting, so this isn't a significant concern of mine. 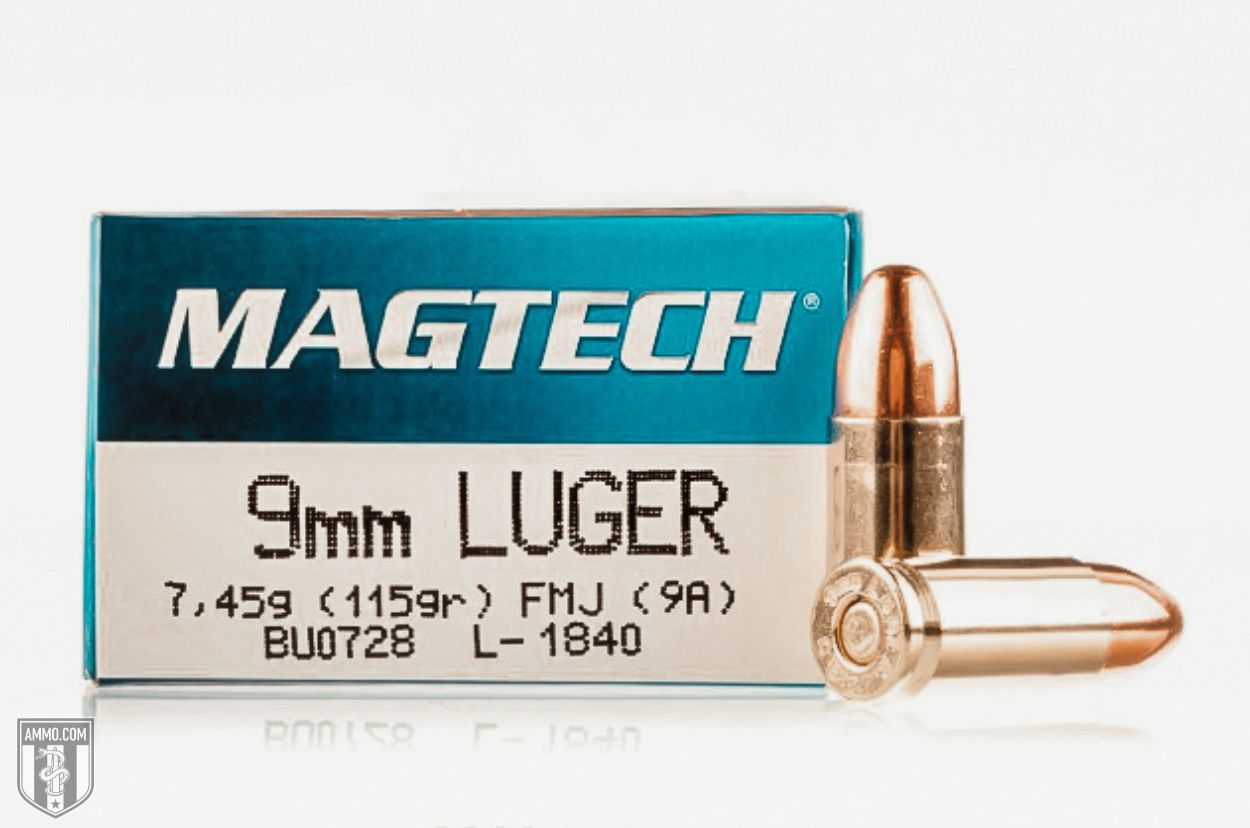 If you're a stickler for only using well-known ammo brands, don't worry. You can take several inexpensive options to the range for a relaxing day of shooting.

The Remington 124 Grain FMJ is designed for paper or metal targets and is reasonably priced target ammo.

The bullet is the same weight as many defense bullets, so you can reliably train without using your expensive ammo.

Remington is one of the industry's most well-known firearms and ammo brands that produces reliable ammo.

If you prefer to shoot lighter bullets, this is the practice ammo for you.

The muzzle energy and velocity are comparable to carry ammo with the same grain bullet, so you can get similar results without spending your life savings at the range.

The ammo I most often use is Federal American Eagle 124 Grain TMJ 9mm Luger because I bought it in bulk at a great price.

However, you don't have to buy it in bulk to get a reasonable price per round.

The main difference with this ammo is the TMJ or total metal jacket bullet.

This helps it shoot a little cleaner because the lead is completely encased so that the bullet won't leave any lead residue behind in your barrel.

I use three criteria when choosing the best ammo for Smith and Wesson M&P 9mm compact handguns; the intended use, price, and reliability.

Whether you've recently come over from the dark side of owning a Glock 19 or Sig Sauer P320 subcompact, these criteria will help you make the best decision possible when choosing the new ammo for your S&W Shield. 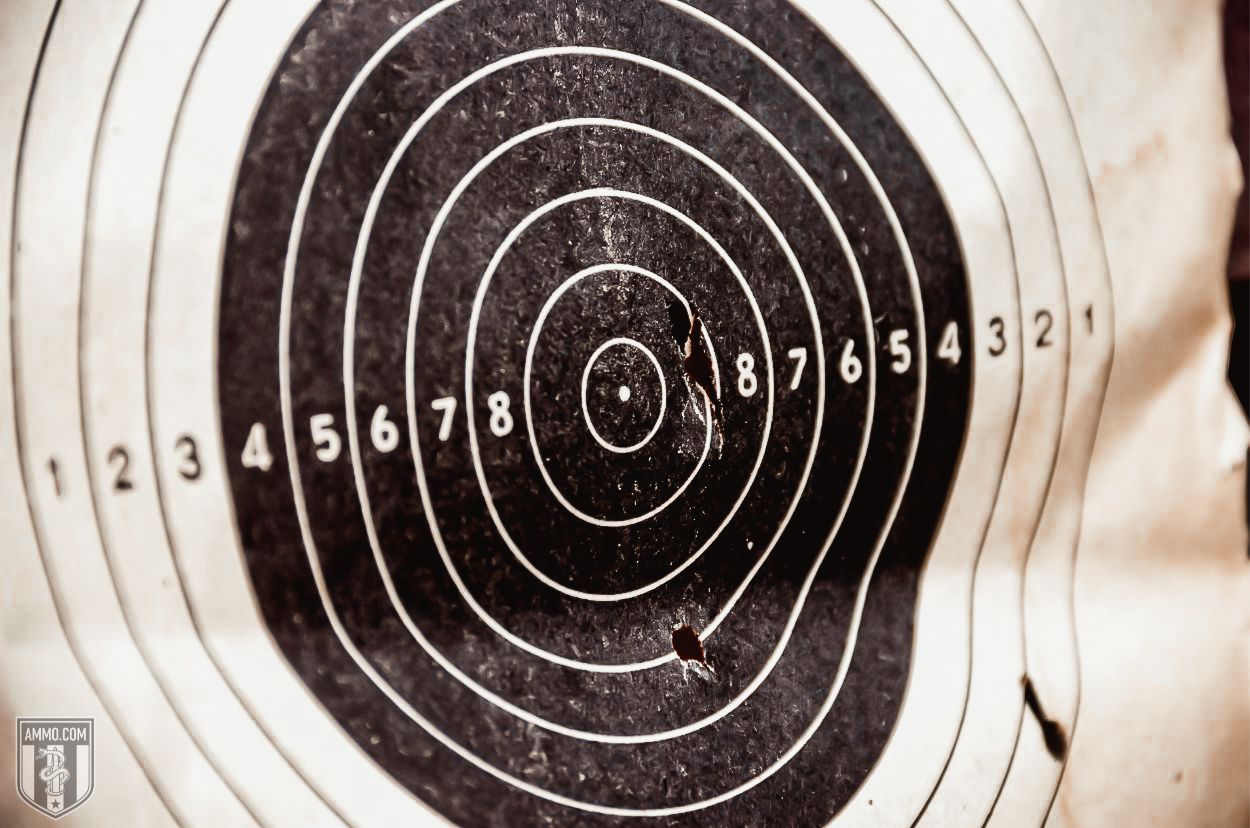 Different styles of bullets are better for specific situations. So choosing the correct bullet for the job is essential.

For example, hollow point bullets are often more expensive and unnecessary for target shooting. However, they are essential for carry ammo because they offer more knockdown power in the same caliber bullet.

When target shooting, an FMJ or TMJ bullet and a brass casing are best for the price and function.

It's essential to stay within your budget. Target ammo should be cheap, but you shouldn't skimp on buying high-quality personal defense ammo.

I'll discuss a few ways shortly how to save money when buying ammo so that you can spend more time at the range and less time donating plasma to purchase ammunition.

Few things are more frustrating at the range than a jam or misfire, but in a self-defense situation, those malfunctions can turn deadly for you and the people you're protecting.

Each gun will cycle brands, bullets, and loads differently, which is why it's so important to test out several to see which one your gun prefers.

Accuracy will also be affected by these factors, as well as your barrel length and front sight placement. A short barrel will be less accurate at further distances than a long one, even if everything else is the same with the guns.

How to Save Money on M&P Shield 9mm Ammunition

As ammo prices continue to skyrocket, we're always searching for ways to save money on ammunition.

I've come up with a few tried and true ways to keep your significant other off your back when you're buying ammo. 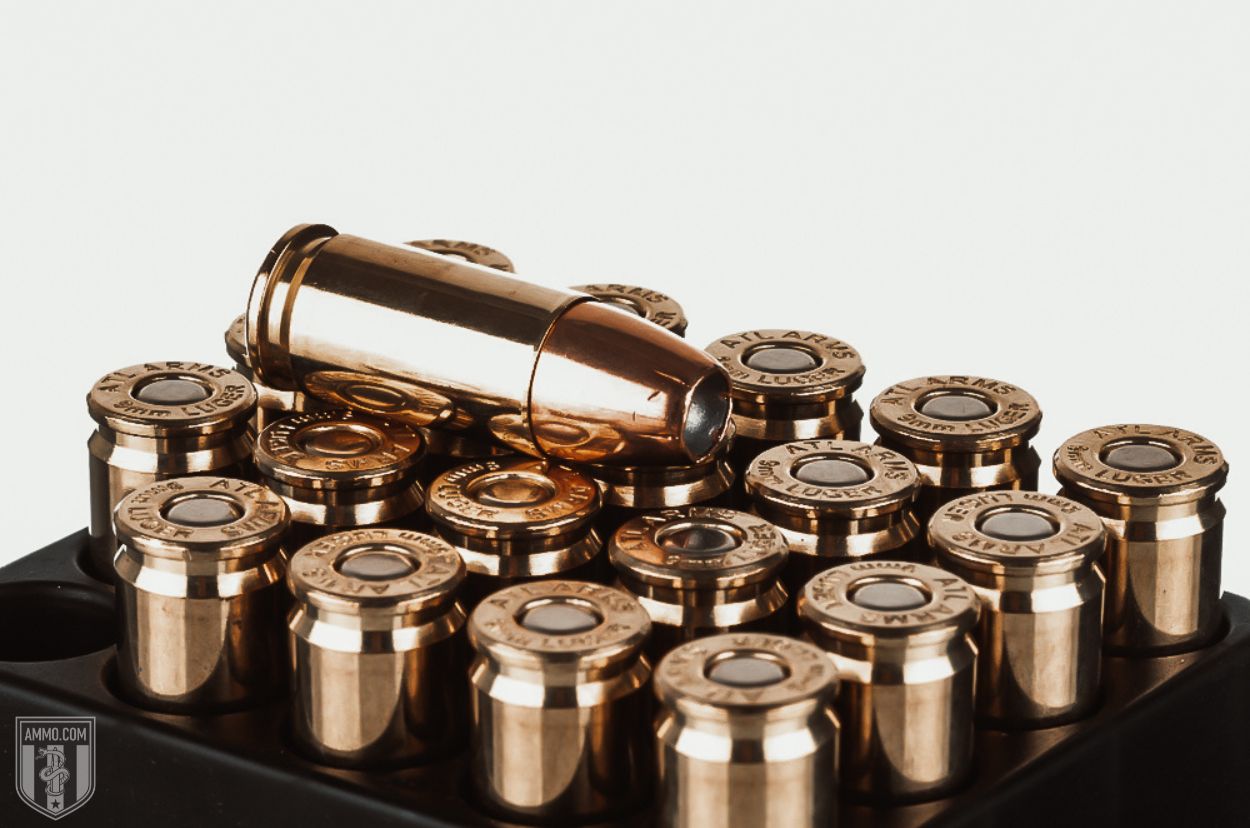 While buying bulk 9mm is more expensive upfront. When you count the cost per trigger pull, you save up to $0.15 per round.

Unless you're in the FBI or law enforcement, you will likely not need to buy carry ammo in bulk, but I highly recommend purchasing target ammo in bulk for the average shooter for the cost savings alone.

Reloading the spent brass is another way to save money on ammo. You'll need to purchase the supplies upfront, but then the amount of your savings depends on how fast you can crank out your rounds.

As daunting as it seems to get started reloading, it doesn't require a gunsmithing certification, just a little research from bullet manufacturers such as Nosler or Sierra.

It's easy to go through many rounds shooting a semi-auto pistol, so combining these approaches will help you multiply the savings.

Buy your target ammo in bulk and then use the spent brass to make more target or carry ammo.

The 9mm has lots of bullet types and weights. Each one has its abbreviation and purpose, which we will discuss below.

The full metal jacket is a lead core with a harder metal covering. The harder metal is often copper, but it doesn't wholly encase the lead along the bottom of the bullet.

These are great bullets for target shooting because they're inexpensive and relatively accurate. 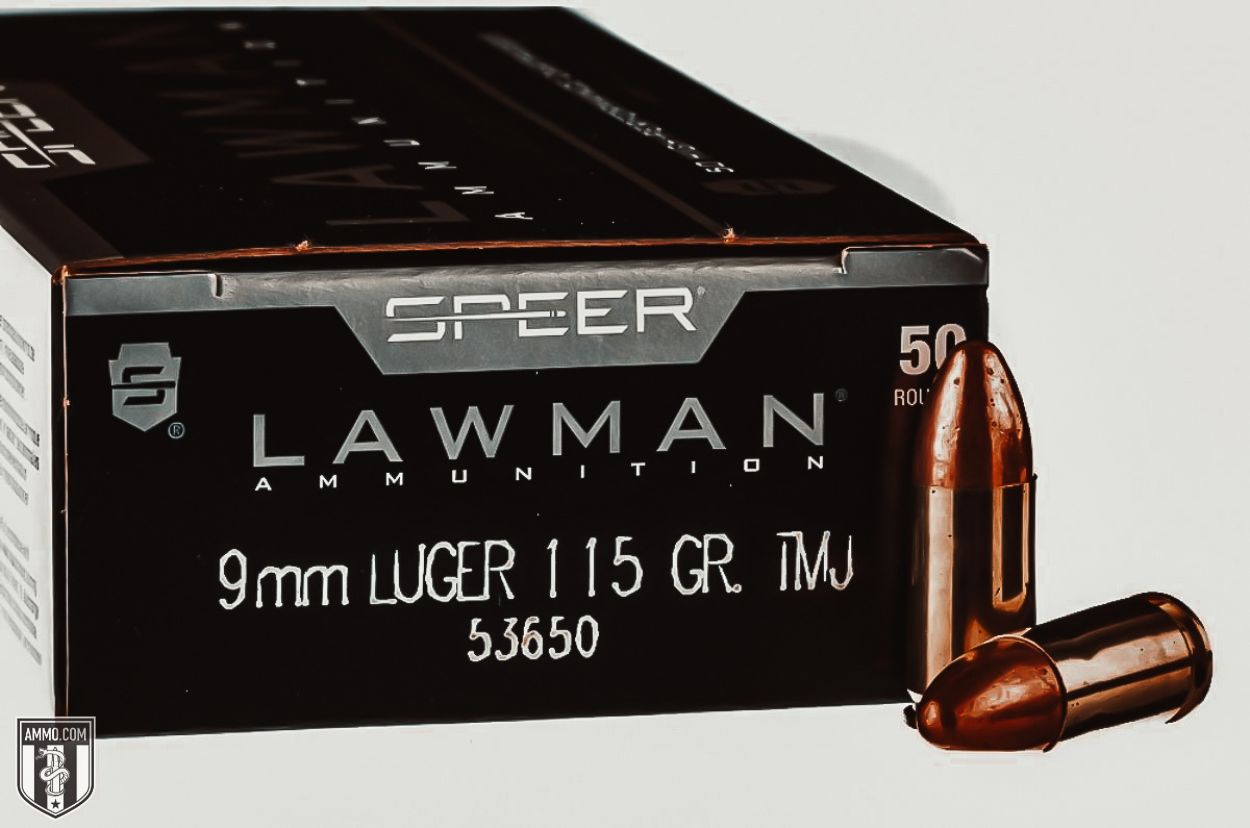 The total metal jacket is slightly different than an FMJ by completely covering the lead core. You won't be able to see the difference unless you take the bullet out of the casing.

These are also good bullets for target shooting because they shoot cleaner than an FMJ and are similarly priced.

Federal makes a total synthetic jacket. These bullets are a lead core with a polymer coating.

The polymer coating reduces friction between the bullet and barrel, which means less wear on your barrel, and they shoot cleaner so that you can shoot more between cleanings.

The Federal Syntech Action Pistol 150 Grain Total Synthetic Jacket is the one-of-a-kind ammo with this type of bullet.

These bullets are some of the best target shooting rounds for the above reasons, and they're not absurdly priced.

A jacketed hollow point is a lead bullet with a concave nose and a metal covering. They're designed to rapidly expand upon impact, which makes them an excellent choice for self-defense ammo.

Because of their unique characteristics, they're more expensive, so I don't recommend using them for target practice regularly.

The Speer Gold Dot 115 Grain JHP is another example of a favorite carry-load of many concealed carriers that uses a jacketed hollow-point bullet. 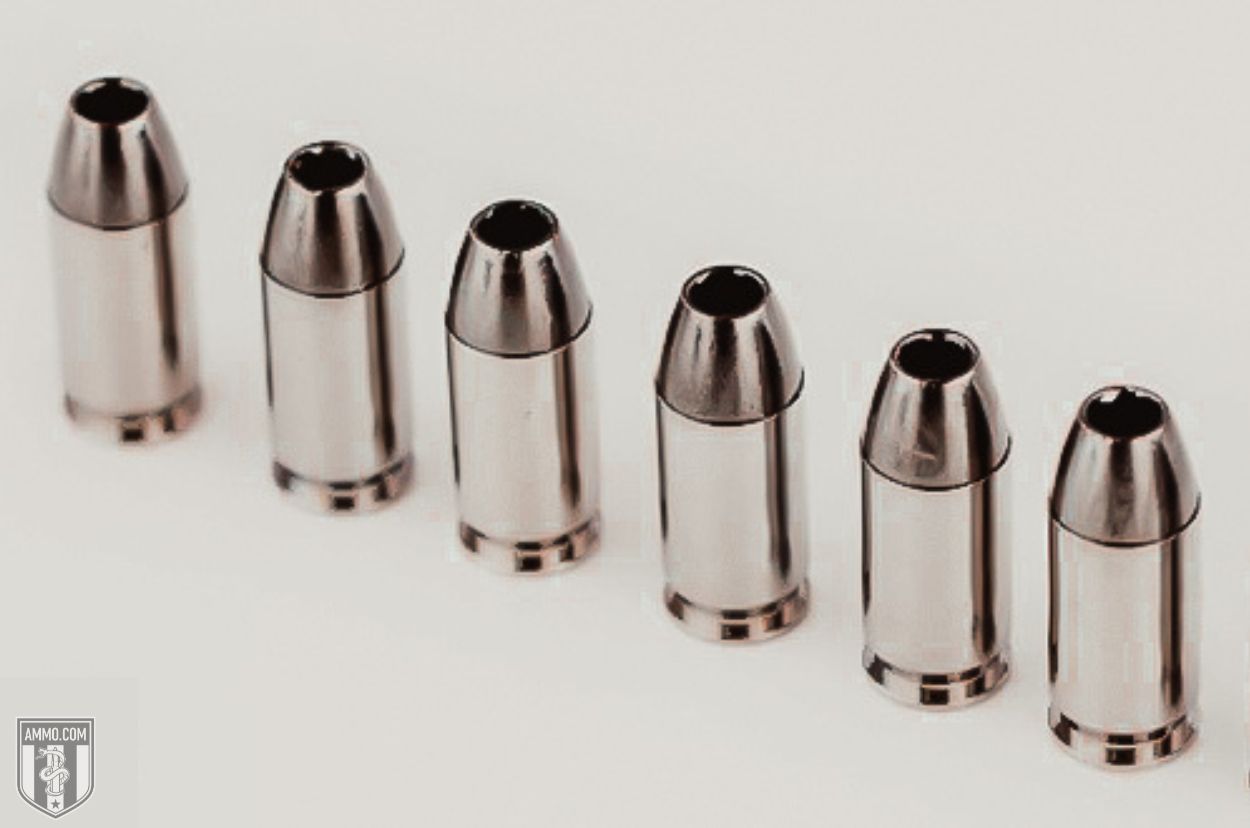 The solid copper hollow point is a traditional hollow point bullet made from copper instead of lead. They're best used in "lead-free" areas because they don't pollute the environment or corrode.

However, copper isn't as heavy as lead, nor does it expand as well as lead because it's stronger.

When paired with the best ammo for Smith and Wesson M&P 9mm Shield, this striker-fired pistol is tough to beat, whether you're using it for self-defense or target shooting.

Despite being expensive rounds, I highly recommend Hornady Critical Defense or Critical Duty for carry ammo.

Yet, for target shooting, I tend to go with the least expensive option: a box of Belom 124 Grain FMJ.