Best 32 ACP Ammo for Your Pocket Pistol or Backup Gun 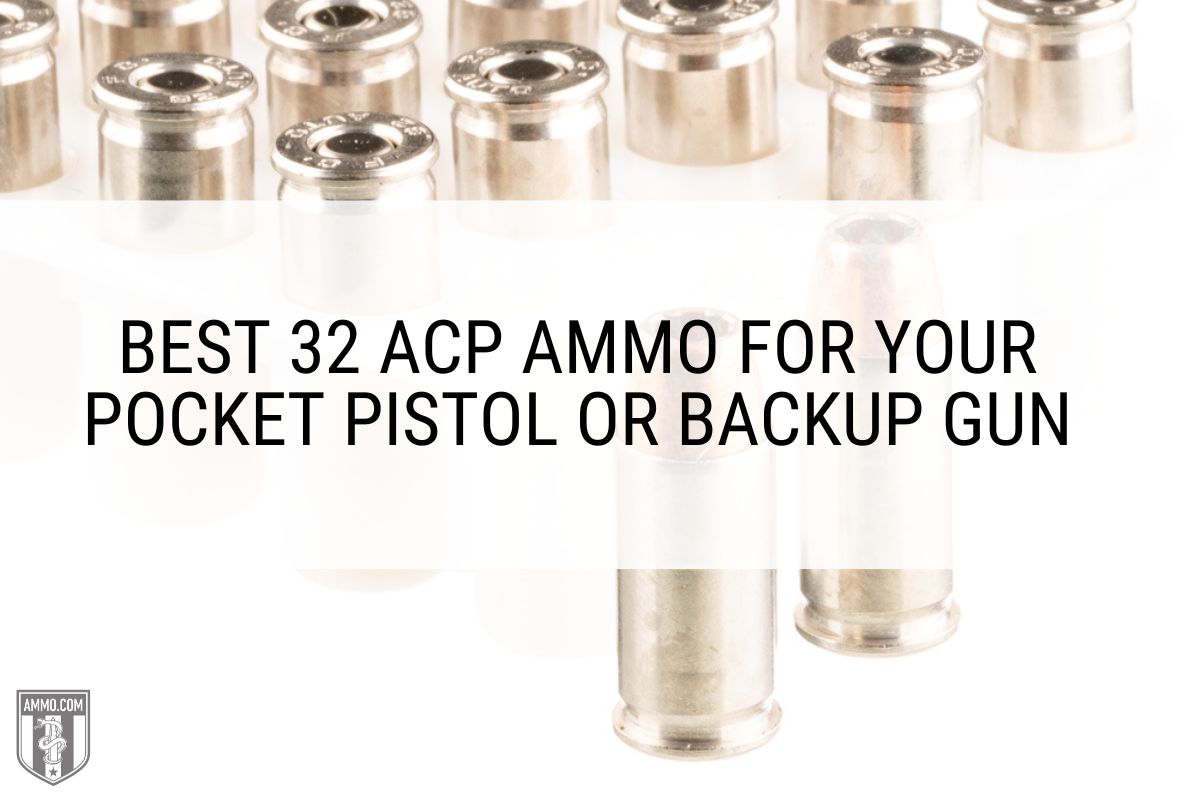 The 380 ACP is the smallest caliber pistol I’d be comfortable concealed carrying for self-defense. However, the 32 ACP (Automatic Colt Pistol) has a devout following in the CCW community who prefer to carry incredibly small, lightweight picket pistols for deep concealment or as a backup gun.

Although the 32 ACP is rather diminutive when you compare it to something like a 45 ACP, the trusty old thirty-two is more than capable of defending your life should the need arise. However, there’s some confusion in the shooting community as to what the best ammo for 32 ACP is for self-defense and concealed carry.

In this article, we are going to give you our top four 32 ACP ammo choices for all your shooting needs.

Our top five list is just one scroll down, however if you can’t wait, the overall best 32 ACP ammo is Fiocchi 73 grain FMJ.

If you’re new to 32 ACP ammunition and aren’t sure what kind you need, I’d highly recommend you read through our buyer’s guide by clicking HERE. However, if you just want to get to our top picks for the best 32 ACP ammo, keep reading. 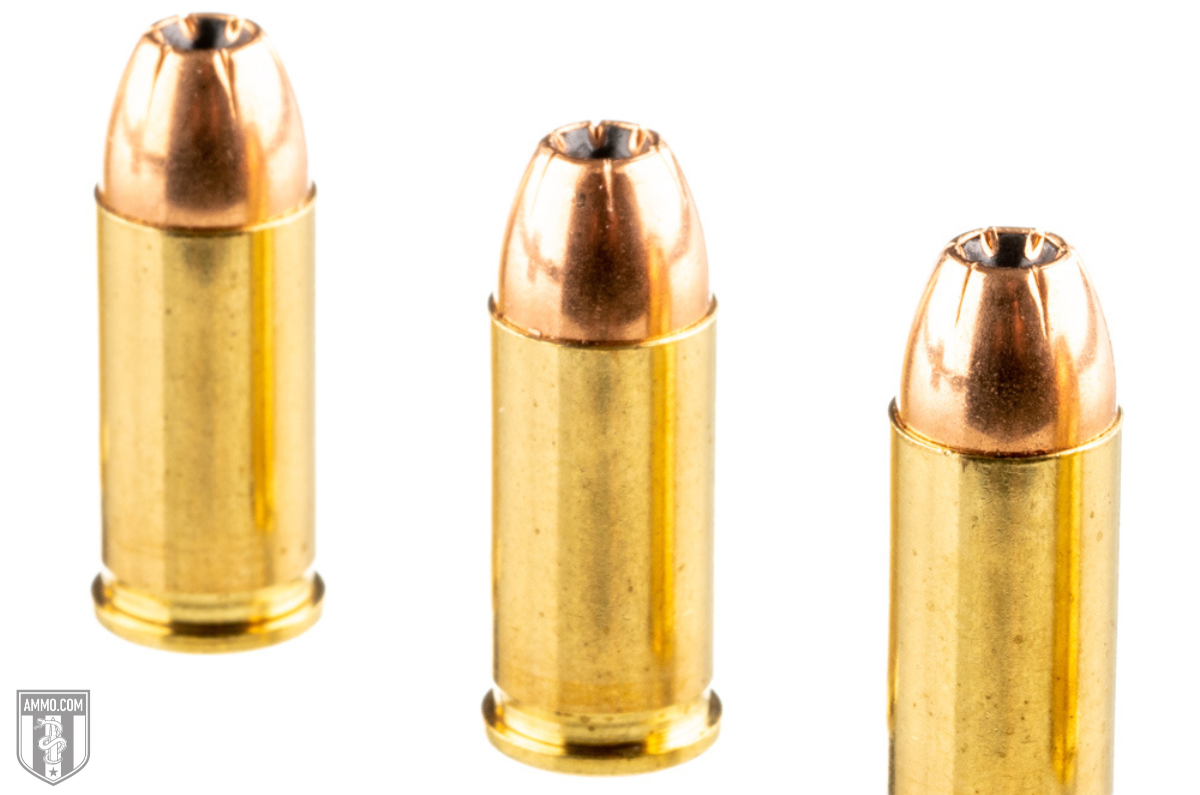 This one might come as a bit of a surprise, as typically it is not advisable to recommend FMJ ammo for concealed carry. However, for the 32 ACP, Fiocchi 73 grain FMJ ammo provided adequate penetration and offers the lowest cost per round on our top 4 list.

The biggest issue that most shooters have with the 32 ACP is insufficient penetration, especially with hollow point ammo. This problem is amplified when using tiny handguns with barrel lengths below 3-inches, like the Kel-Tec P32, L.W. Seecamp, or Beretta Tomcat.

These smaller guns are extremely comfortable to carry, but the 32 ACP loses a lot of muzzle velocity (about 100 fps on average) when fired from such a short barrel. To quantify penetration, the FBI ballistic gelatin testing protocol stipulates that 12-18 inches of penetration is ideal for self-defense.

Based on our testing, Fiocchi 73 grain FMJ averages around 16” of penetration when fired from a mouse gun, which is right in the sweet spot based on FBI standards. Although you won’t get amazing wound channels, the Fiocchi ammo will give you the penetration you need from these smaller pistols.

Although the 32 ACP is generally considered a low recoil cartridge, the Fiocchi ammo had slightly higher recoil than several factory loads on our list. However, this is a small price to pay for the extremely consistent penetration and reliability offered by the Fiocchi 73 gr FMJ ammo. 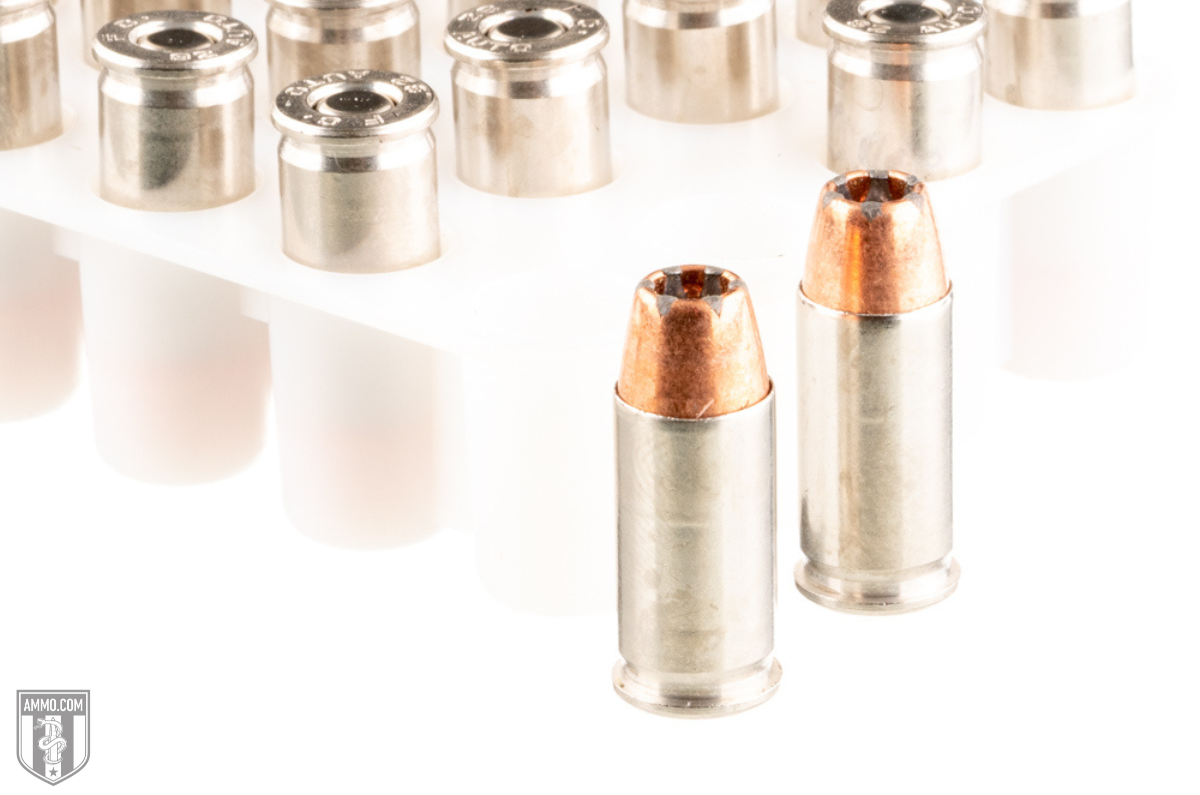 If you’re looking for personal defense 32 ACP ammo that works well in all different flavors of 32 ACP pistols, then the Hornady Custom 60 gr XTP is the cartridge for you. The Hornady eXtreme Terminal Performance (XTP) hollow point bullet utilizes a flat nose design which creates a wider wound channel than the Fiocchi FMJ bullet, which is excellent for self-defense.

In pocket pistols, we found that the Hornady 60 gr XTP met minimum penetration standards with an average of approximately 12” of penetration. However, when paired with a larger handgun with a longer barrel like the Beretta Cheeta or Sig Sauer P230, penetration increased to around 17” on average.

Many shooters also prefer the safety net of carrying a hollow point bullet, as they feel that this will reduce the potential for over penetration. However, our ballistic gel testing showed that the 60 gr XTP failed to expand when fired from a Kel-Tec P32 and only showed minor signs of mushrooming when fired from a larger Beretta Cheetah.

Another major benefit was that the Hornady ammo had less felt recoil than Fiocchi, especially when used in a pocket pistol. This really helped us stay on target for follow-up shots when using a smaller handgun, which will be important in a self-defense situation. 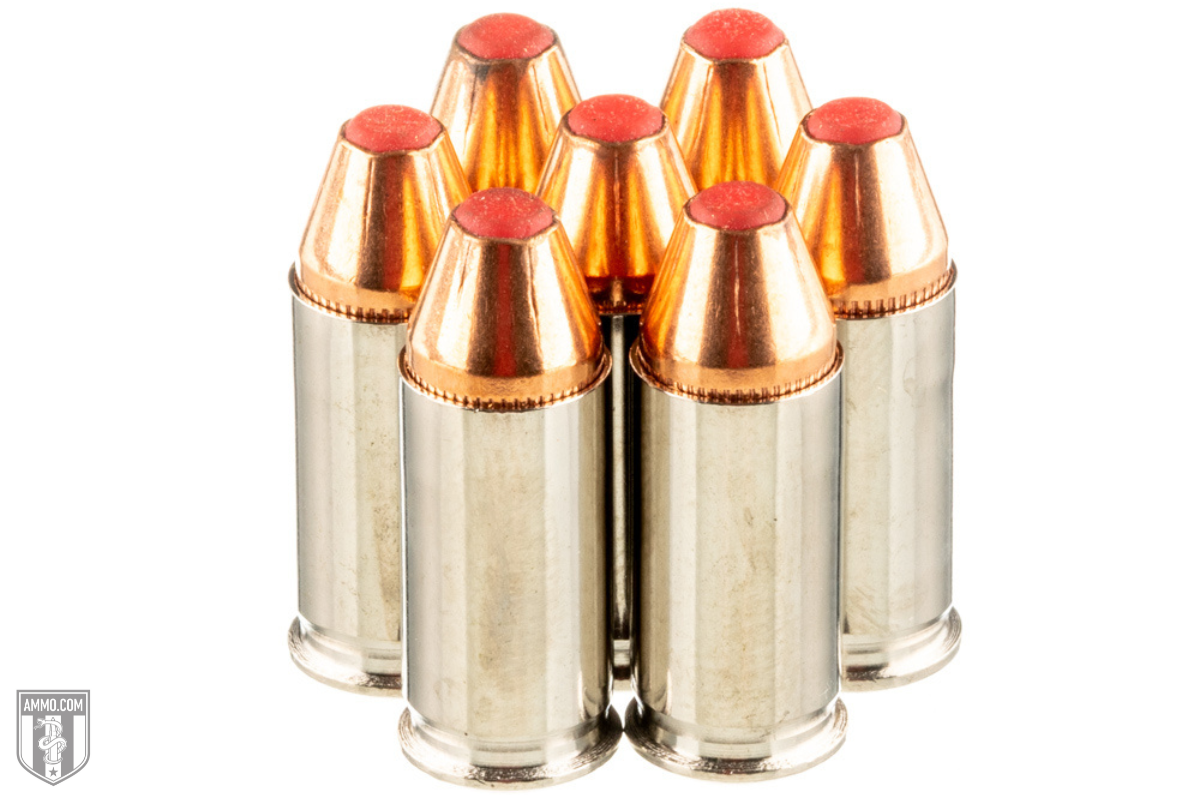 If you want extremely reliable hollow point expansion in your 32 ACP mouse gun, then look no further than the Federal 65 grain Hydra-Shok JHP. We found this ammo to be very consistent in terms of expansion for all varieties of 32 ACP pistols, both large and small.

Penetration was also very consistent with Hydra-Shok ammo, averaging around 9” in ballistic gelatin. However, this is the major issue when using 32 ACP hollow point ammo: They don’t penetrate deep enough. This is caused by the rapid expansion of the hollow point bullet, as the more it expands, the more it slows down. The result is subpar penetration.

This means that in a self-defense situation, it is possible that multiple shots will be needed to stop the threat. However, over penetration will be of little concern with how reliably the Hydra-Shok expands. 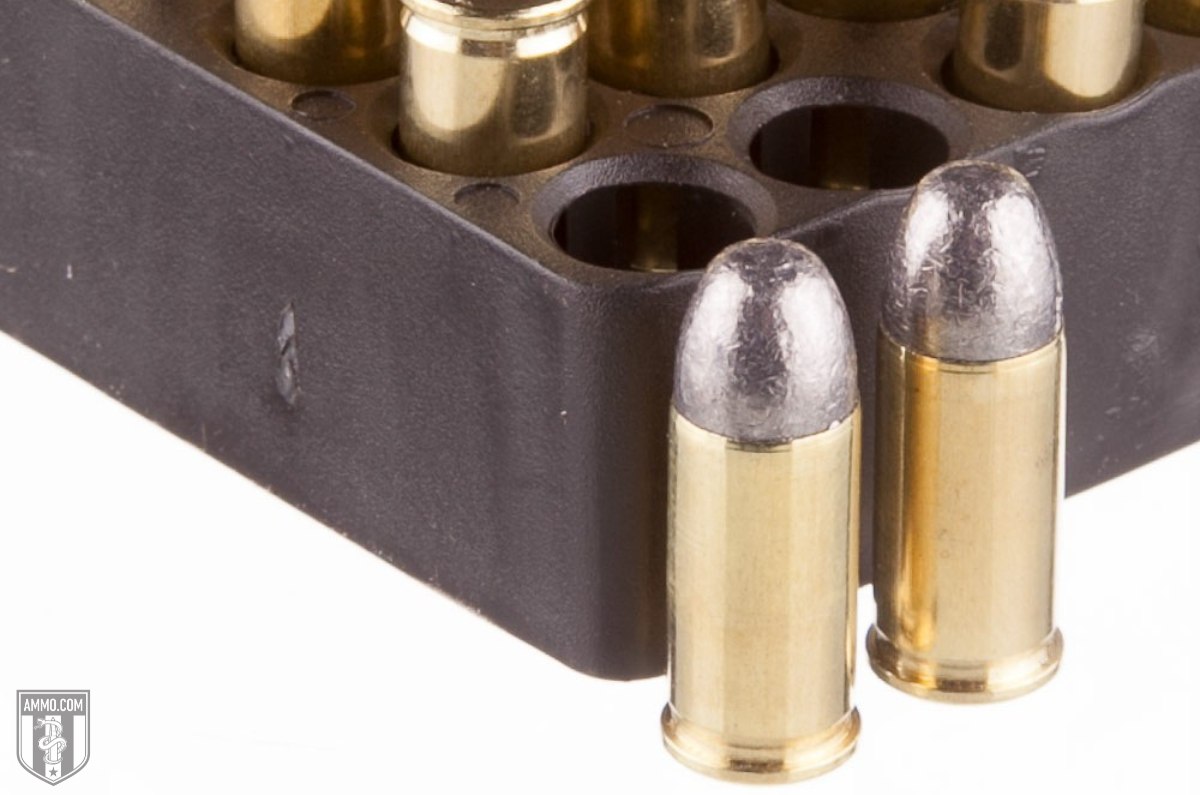 Do you like powerful ammo and recoil that makes you feel like you’re shooting a 357 Magnum out of a Walter PP or North American Arms (NAA) Guardian? Ok, maybe the 357 Magnum part is a bit of an exaggeration, but if you like hot loads then it’s likely you’re well acquainted with Buffalo Bore Ammunition.

This +P offering has the highest muzzle velocity and energy on our top 4 list and you’ll pay for that power in felt recoil. This one can be somewhat uncomfortable to shoot in tiny mouse guns and it is advisable to utilize this load in a larger 32 ACP handgun.

Expansion of the Barnes TAC-XP hollow point bullet is impressive and extremely reliable, there’s only one problem and I bet you can guess what it is. Yup…low penetration. Even with the higher muzzle velocity, the Buffalo Bore +P ammo still only manages around 9” of penetration thanks to the rapidly expanding hollow point.

Best of the Rest

Not every factory load can make it into the top 4, however there are still a lot of exceptional ammunition options if you're concealed carrying your favorite 32 ACP pocket pistol. Here are some different ammo options if you can’t seem to locate the loads listed above.

Hornady Critical Defense 60 gr FTX JHP – An excellent self-defense ammo with amazing expansion results in ballistics gelatin. The polymer tip helps protect the hollow point from deformation and initiates expansion when it contacts soft tissue. A great alternative to the 60 gr XTP hollow point ammo also from Hornady that was mentioned above.

Winchester Silvertip 60 gr JHP – Winchester Silvertip ammo has been an industry standard for years and makes an excellent self-defense option. With exceptional expansion and reliability, the Winchester offering makes a great option to load into your Walther PPK or NAA Guardian pocket pistol.

Speer Gold Dot 60 gr JHP – Speer Gold Dot hollow points are some of the best in the business and are the preferred bullets for law enforcement and federal agencies. With amazing terminal ballistics, Speer Gold Dots are always extremely reliable and a perfect home defense option for your larger 32 ACP handguns.

Sellier & Bellot 73 gr FMJ – An excellent option if you want to concealed carry FMJ ammo or if you’re heading to the range. Sellier & Bellot (or S&B for short) is based in the Czech Republic and like most European ammo manufacturers, loads their 32 ACP a little hotter than North American standards. A great alternative if you can’t find the Fiocchi FMJ ammo mentioned earlier in the article.

Aguila 71 gr FMJ – Based in Mexico, Aguila Ammunition is well known for their high-quality standards and reliability. This handgun ammunition is a great choice if you need some inexpensive cartridges to hit the range and punch holes in paper or tin cans with your favorite 32 ACP handguns.

Remington UMC 71 gr FMJ – No matter if you’re heading to the range or carrying your favorite CCW 32 ACP pistol, Remington has your back. Their 71 grain FMJ ammo is an excellent option for target practice as it is inexpensive and shoots softer than its European-made counterparts.

The 32 ACP was developed by John Moses Browning in 1899 and is a centerfire, semi-rimmed straight-walled pistol cartridge. It was designed for use in blowback semi-automatic pistols and has seen law enforcement and military use primarily in Europe. In North America, the 32 ACP has a small but devout group of followers who enjoy the rounds low recoil and lightweight handgun designs.

In this guide, we want to dispel some myths surrounding the ballistics of the 32 ACP as well as help you understand what to look for in ammo for your favorite pocket pistol.

Is 32 ACP Good for Self Defense?

The 32 ACP has been used effectively by various military and law enforcement agencies across the globe since its release. Although some shooters consider the 32 ACP to have marginal stopping power, it is an excellent cartridge for smaller handguns ideal for deep concealment or as a backup gun.

Perhaps one of the best characteristics of the 32 ACP for use in a CCW pistol it is a small caliber with low recoil. This allows shooters to carry extremely lightweight handguns and have considerably quicker follow-up shots when compared to something larger like a 45 ACP.

However, the main issue many shooters have with the 32 ACP is its lower levels of penetration compared to larger cartridges like the 9mm or 380 ACP. This is why bullet selection is so critical when choosing to CCW a 32 ACP handgun.

Perhaps one of the biggest myths in the shooting world is that you must carry FMJ ammo in a 32 ACP. Although full metal jacket projectiles will provide exceptional penetration, it isn’t always the best choice for concealed carry.

Jacketed hollow point bullets are designed to expand when they encounter soft tissue in an effort to minimize the potential for passing through the bad guy and hitting an innocent bystander. JHP bullets also create wider wound channels to increase the probability of stopping a threat.

The Federal Bureau of Investigation (FBI) established standards for self-defense ammo after the 1986 Miami Shootout where two special agents lost their life in the line of duty. The FBI testing protocol states that personal defense ammo should have a minimum penetration of 12” but not exceed 18”.

In our testing, most JHP ammo that had adequate expansion had penetration results averaging around 9”, which is short of the FBI minimum requirements.

However, the lower penetration of 32 ACP JHP ammo can be a benefit in some situations, such as home defense. In these self-defense scenarios, ensuring a bullet does not exit a would-be home invader is a huge asset as it means your likelihood of striking an innocent bystander or family member is greatly reduced.

On the other hand, if you are concealed carrying and there is the potential your attacker might be wearing multiple layers of clothing, FMJ ammo would be the better choice.

Finding 32 ACP ammo in stock near me can sometimes be a bit tricky as it is not as popular as other calibers like the 9mm, 45 ACP, or 357 Magnum. However, we have a wide variety of 32 ACP ammo for sale here at Ammo.com to fulfill all your shooting needs.

Buying bulk ammo is perhaps one of the best ways to save money. By purchasing ammo in bulk, you get a lower cost per round and always ensure that you’re stocked up on the best 32 ACP ammo for your pistol.

If the events of 2020 taught us anything, it’s that ammo shortages can hit at any time. Making sure you’ve got enough ammo to maintain your practice schedule is critical to ensuring your marksmanship skills don’t decay over time.

Now that you have a better idea of how to pick the best handgun ammunition for your 32 ACP pistol, let’s get back to our best 32 ACP ammo picks by clicking HERE.