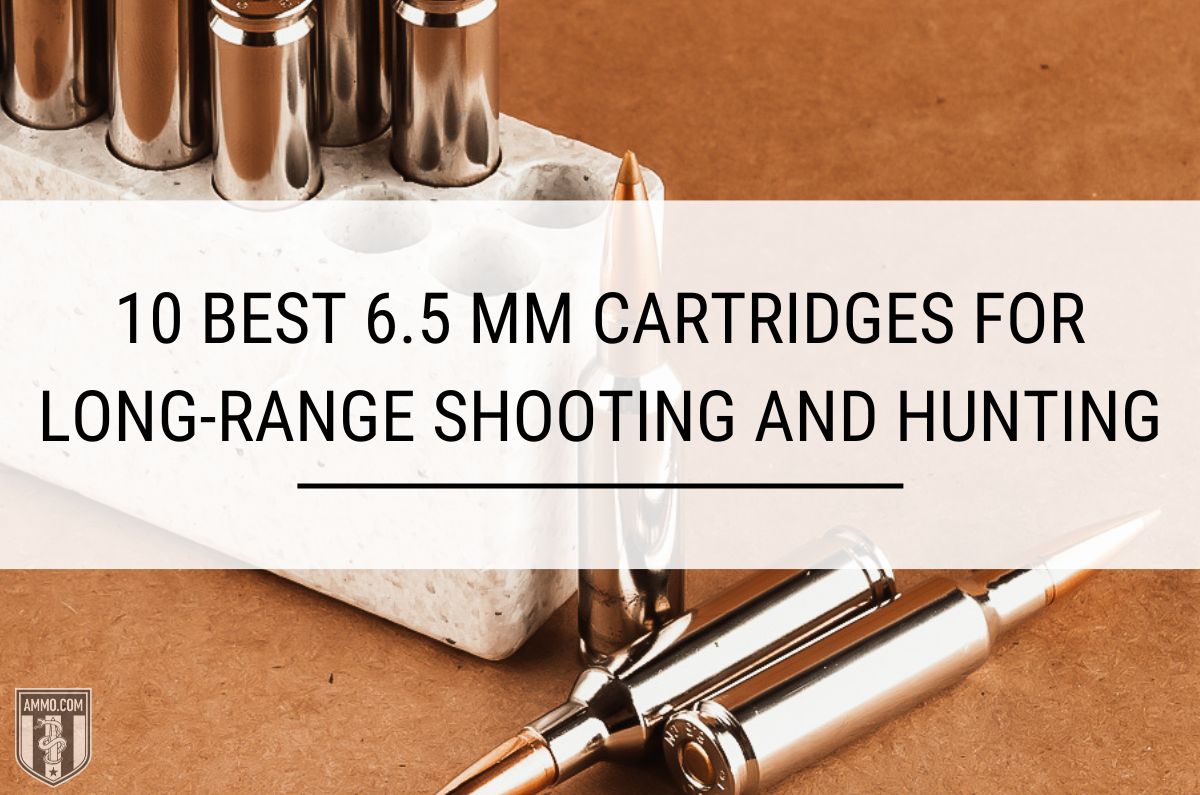 With the meteoric rise of the 6.5 Creedmoor, American shooters have finally caught up with what European hunters have known for over a century: 6.5mm bullets are good.

Although cartridges like the 308 Winchester, 300 Win Mag, and 30-06 Springfield have dominated the US market for generations, the new breed of 6.5’s offer shooters a flat shooting cartridge with less recoil than many of its 30-caliber counterparts.

As such, the popularity of the 6.5mm bullet has skyrocketed since 2014 with rifle manufactures like Savage, Browning, Remington, and Winchester all offering new rifles chambered for multiple flavors of 6.5.

With so many different varieties of 6.5 cartridges available, many shooters have been whipped into a frenzy to find the best 6.5 on the market to cover all their hunting and long-range shooting needs.

In this article, we will discuss the Top 10 Best 6.5 Cartridges you should consider for your new target shooting or hunting rifle. 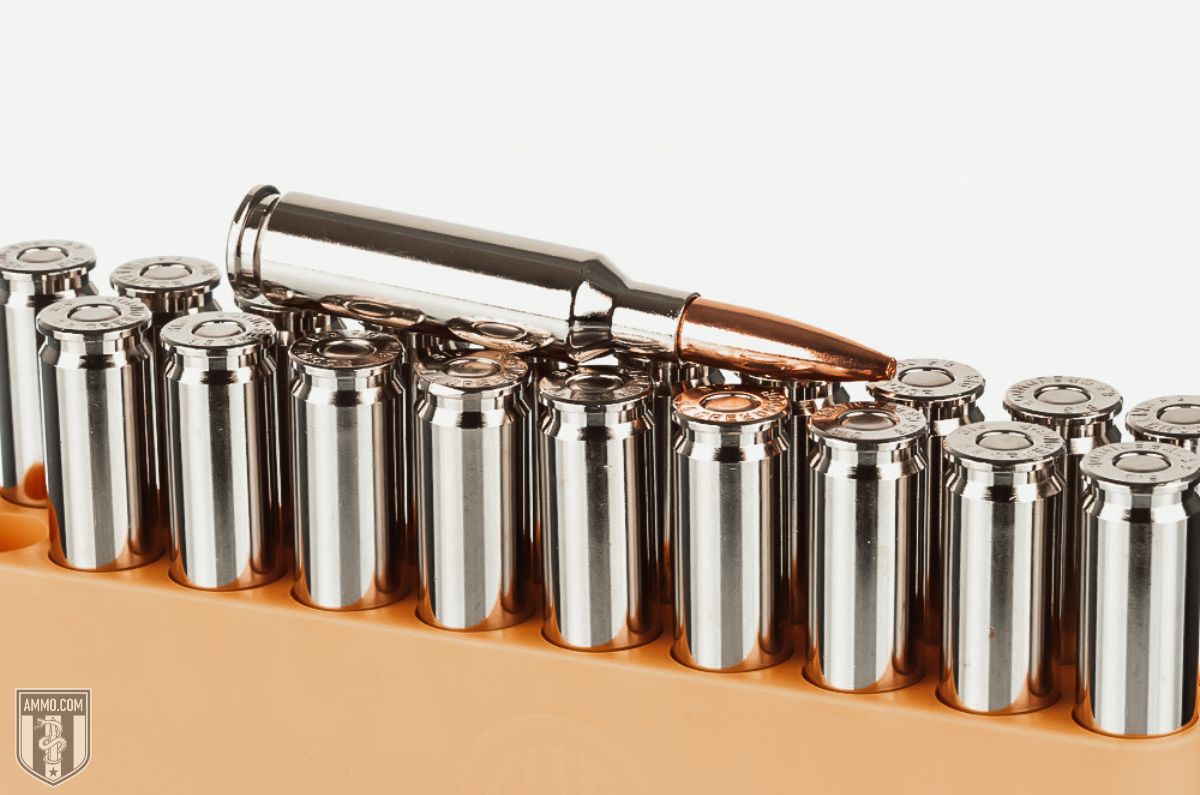 The 6.5 Creedmoor is the cartridge that single-handedly started the 6.5mm cartridge love fest in North America. Introduced in 2007 by Hornady Ammunition, the 6.5 Creedmoor was the product of a gripe session between legendary shooter Dennis DeMille and Dave Emary, the senior ballistician of Hornady at the time.

What they produced was a cartridge that was low recoil, had a flatter trajectory than a 308 Winchester, and was capable of making 1,000 yard shots with relative ease. Extremely tight tolerances in the chamber throat design make the Creedmoor one of the most inherently accurate out of the box rounds available in the market today.

Although the 6.5 Creedmoor began its life as a competitive long range shooting round, it found itself pushed into service as a hunting cartridge as well. It is extremely effective against whitetail, mule deer, and antelope with impressive terminal ballistics on these medium-sized game animals at longer ranges.

The Creed can be utilized against elk with proper shot placement and a proper hunting bullet. The Creedmoor’s long, aerodynamic projectiles have incredibly high ballistic coefficients and are typically found inside the 135 to 150 grain weight range.

The 6.5 Creedmoor has also received some attention by the U.S. military, as tests of the round by USSOCOM discovered that military snipers doubled their hit percentages at 1,000 yards when switching to the 6.5. Since the 6.5 Creedmoor was designed to fit into a short-action rifle, it is suitable for use in the semi-automatic AR-10 as well as the Springfield M1A and the FN SCAR 20S.

The meteoric rise of the 6.5 Creedmoor has opened many shooters eyes to the world of long-range shooting competition and the Creedmoor remains the undisputed champion of the 6.5mm cartridges in North America. 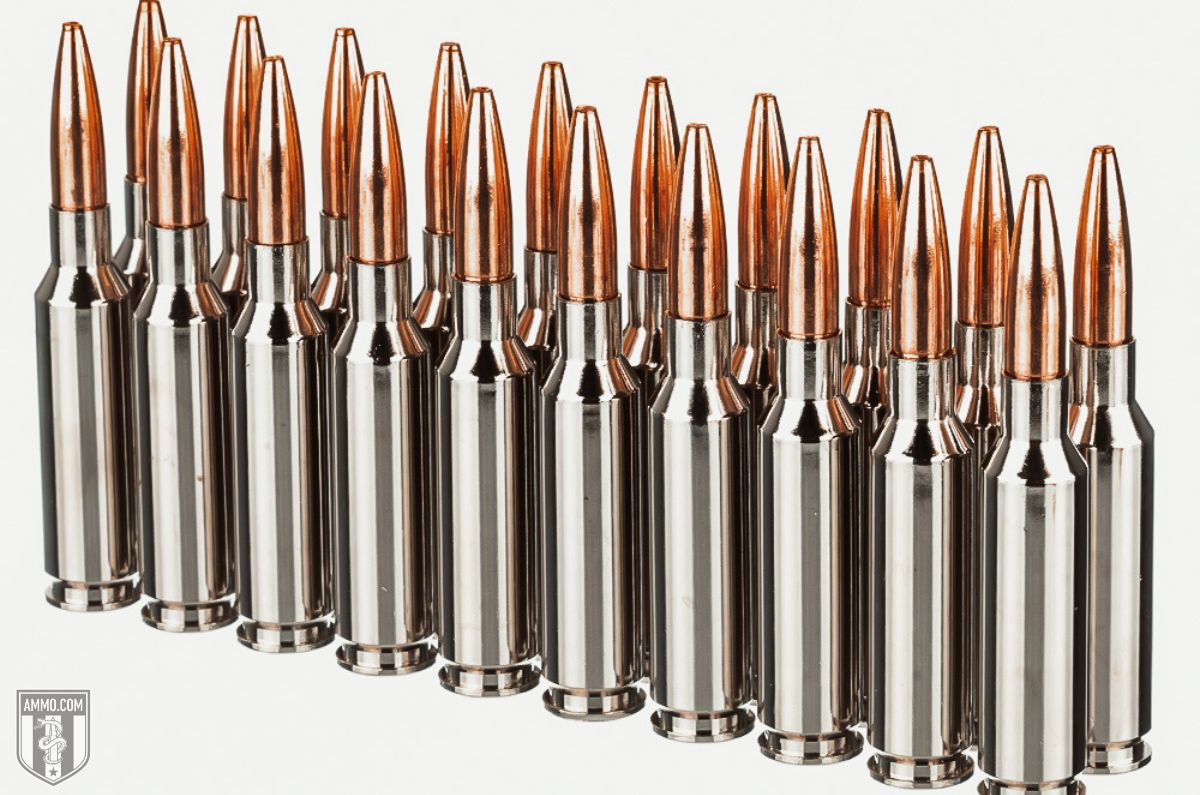 Although the 6.5 Creedmoor might be the all-star of the 6.5’s in America, the European 6.5x55mm Swedish Mauser was introduced over a century before the Creedmoor was even a glimmer in Hornady’s eye.

Development of the 6.5x55mm Swedish Mauser (6.5 Swede) began in 1891 as part of the Swedish-Norwegian Rifle Commission which did extensive ballistic testing on various bullet diameters. In the end, the 6.5mm bullet was selected for its high ballistic coefficient (BC) and flat trajectory.

What they developed was a flat shooting, lower recoil rifle cartridge that was effective on the battlefield as well as in the woods. Hunters quickly realized the capabilities of the 6.5x55 and it has been one of the top Scandinavian hunting rounds for decades, regularly taking down Norwegian moose and reindeer with relative ease.

With a longer overall length, the 6.5x55 requires the use of a long action. This works out perfectly for seating longer, high-BC bullets without infringing on powder capacity. When loaded to similar pressures, the 6.5 Swede provides shooters a distinct muzzle velocity advantage over the Creedmoor.

The 6.5 Swede is a certified SAAMI cartridge, and you can find ammo for it here in North America.

However, ammunition manufacturers will typically load the round light to accommodate for older rifles like the 1894 Krag–Jørgensen or Model 1896 Swedish Mauser. Therefore, to achieve optimal results in a newer rifle, the 6.5 Swede needs to be handloaded or ammo from Norma or Lapua should be used.

When loaded with proper modern hunting bullets, the 6.5 Swede can take down elk with proper shot placement. 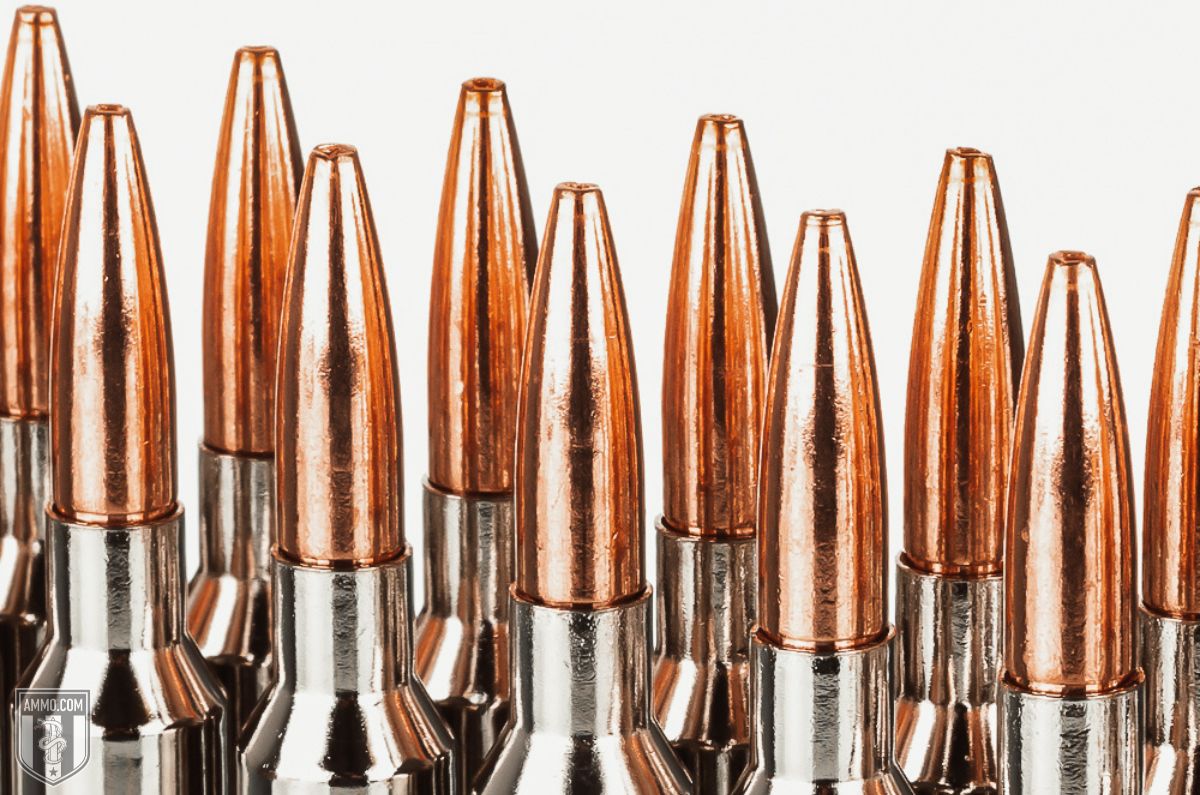 Developed in 2003 by Alexander Arms, the 6.5 Grendel is an intermediate cartridge that was designed to increase the range and lethality of the AR-15 platform.

The 6.5 Grendel typically fires bullet weights between 120 to 130 grains that can reach velocities nearing 2,600 fps out of a 24-inch barrel. Shorter barrels will have lower velocities, but in general the 6.5 Grendel has the capability of reaching 1,000 yards with match-grade factory ammo.

Out of all the 6.5 mm cartridge in this article, the Grendel is by far the weakest. However, it is a straight upgrade to the AR-15’s namesake, the 5.56 NATO.

Although the 6.5 Grendel has not received much military attention, it has found a home in the long-range shooting crowd and has transitioned into an excellent hunting cartridge for both deer and feral hogs.

The 260 Remington was released in 1997 and was a bit ahead of its time to achieve much commercial success. Like many of its offerings, Remington has a habit of taking wildcat cartridges and attaching their name to it, like the 7mm-08 Rem and the 22-250 Rem. 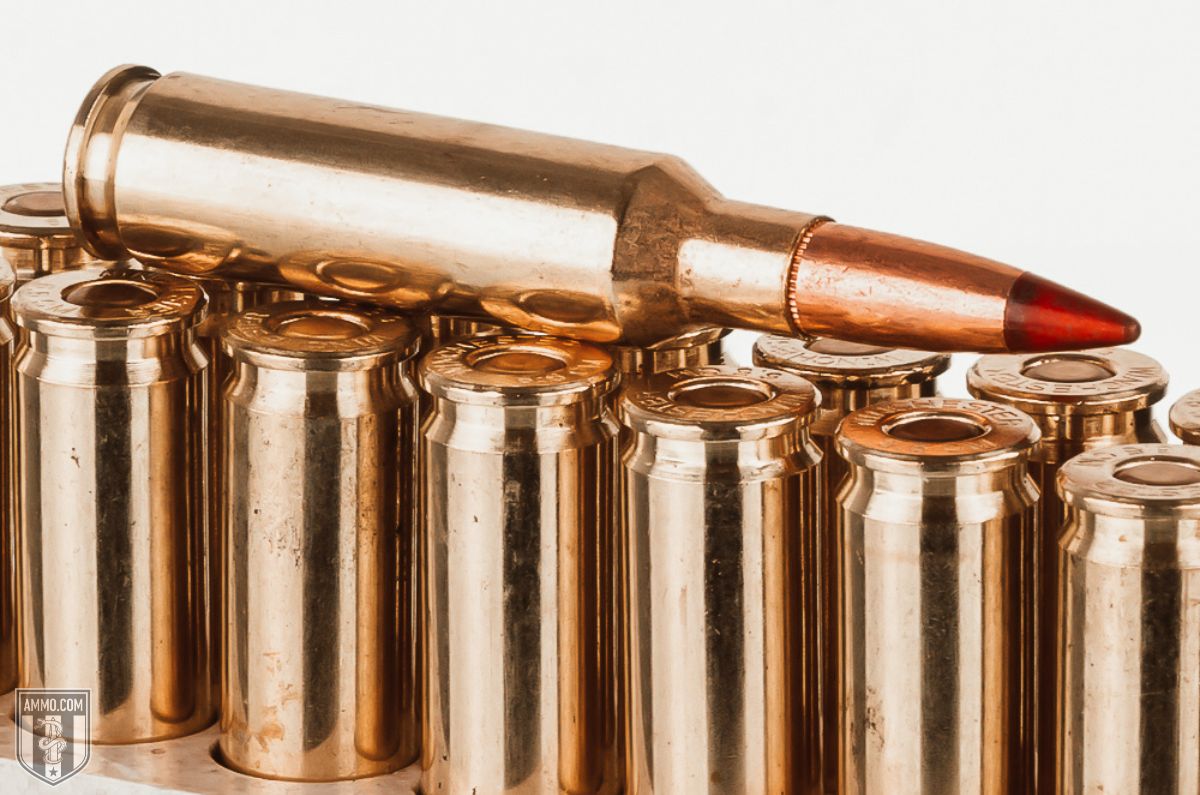 Like many other 6.5 mm cartridges before it, the 260 Remington seemed doomed to failure in North America. However, when Sgt. Sherri Gallagher won the 2010 NRA High Power National Championship with a 260 Remington, the cartridge saw a small revival. Following that victory, Lapua announced they would be producing 260 Rem brass at SHOT Show in 2011.

Capable of firing a 140-grain bullet at 2,750 fps, the 260 Remington makes for a formidable hunting cartridge for whitetail and elk at proper ranges. 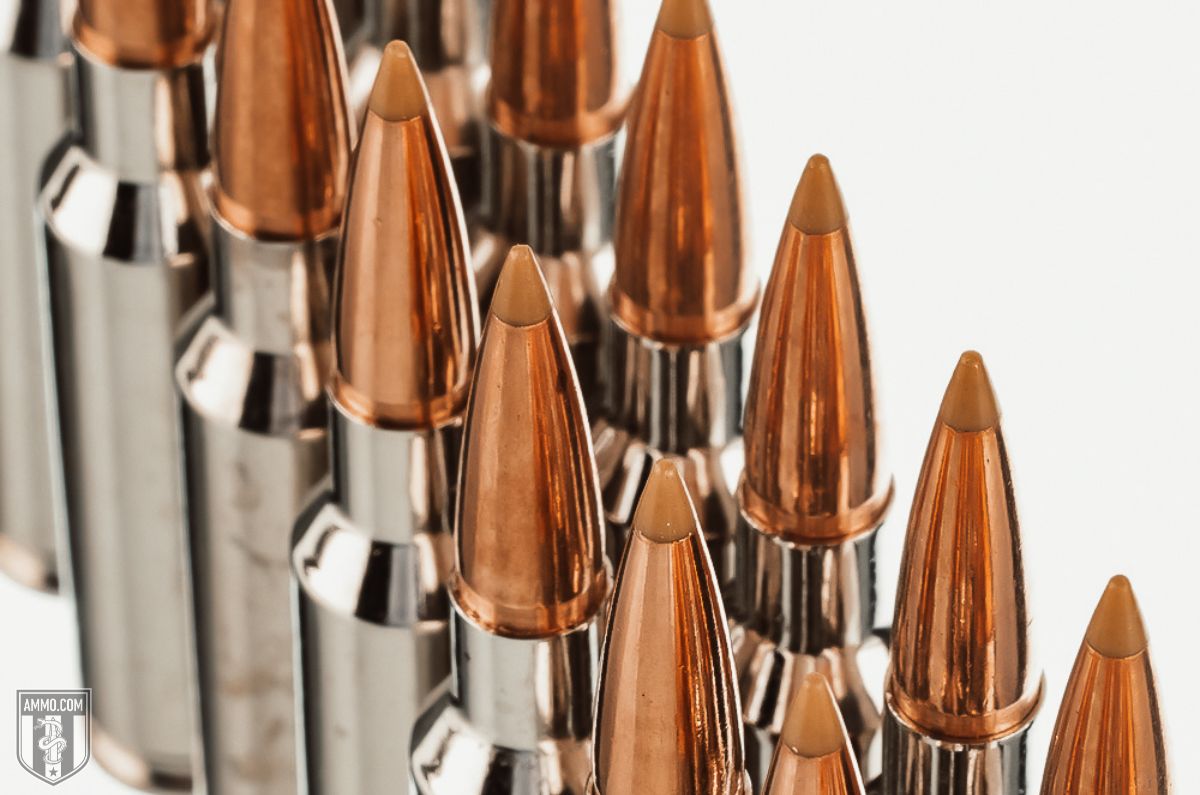 The 6.5 Precision Rifle Cartridge (PRC) was developed in 2018 by Hornady Ammunition by necking down the often forgotten 300 Ruger Compact Magnum case to accept a 6.5mm bullet. The result is arguably one of the best long-range hunting cartridges every created.

Pushing a 140-grain bullet at nearly 3,000 fps, the 6.5 PRC is amazing for deer and can handle elk with relative ease. The PRC is vastly superior to milder 6.5mm loads like the 260 Remington and 6.5 Creedmoor, is slightly more powerful than the 6.5-284 Norma, and keeps pace with the mighty 264 Win Mag.

Developed to fit in a fast-cycling short-magnum action, the 6.5 PRC provides everything big game hunters have ever wanted in a short magnum cartridge. By its nature the PRC is an extremely efficient cartridge, has a respectable barrel life, and is extremely accurate.

You could argue that the 6.5 PRC is the second-most popular 6.5mm on the market today, trailing only the superstar 6.5 Creedmoor. There are numerous factory loads for the PRC with a wide variety of potent big game hunting bullets like the Nosler AccuBond, Barnes LRX, Hornady ELD-X, and Swift Scirocco II.

Finding a rifle chambered in 6.5 PRC is becoming easier by day, as Hornady has done an excellent job marketing its cartridges to rifle makers. You’ll be constricted to bolt-action rifles only, but you’ll want a solid shooting platform to reach the ranges the PRC is capable of. 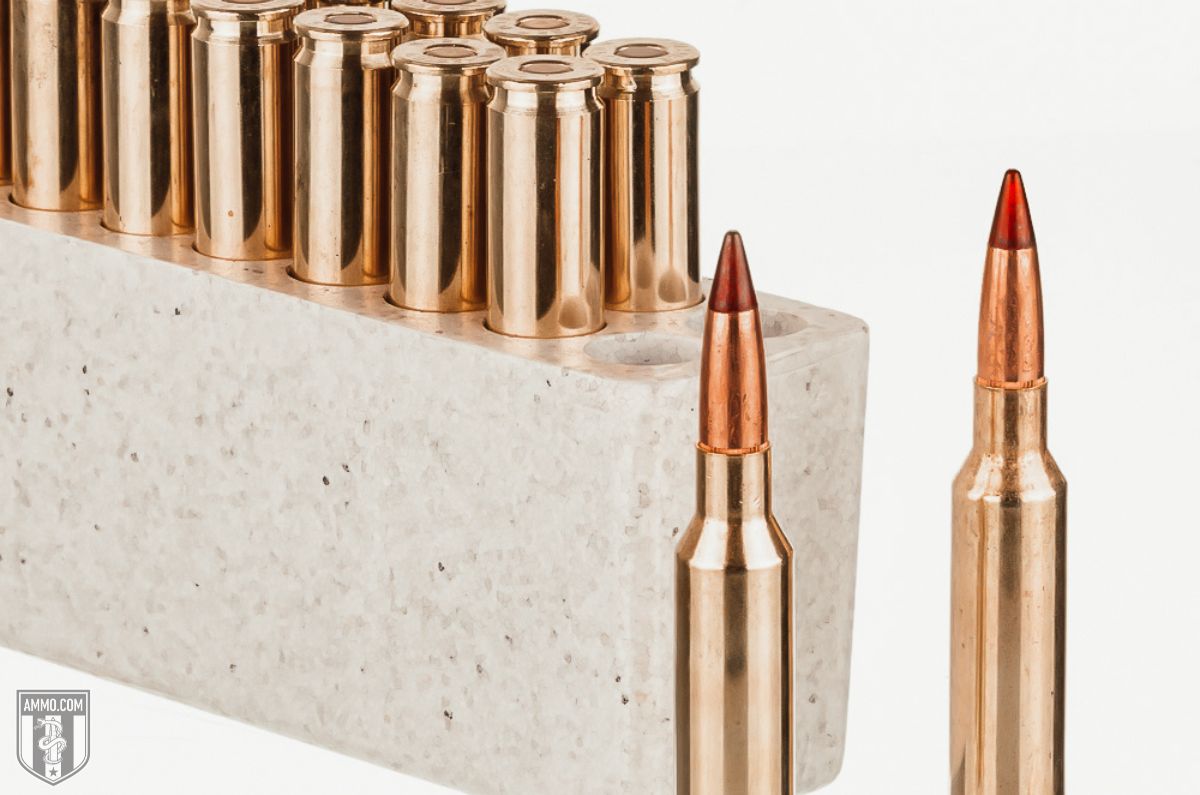 The 26 Nosler is undoubtedly the hotrod of the 6.5mm cartridges, boasting an impressive 3,300 fps when firing 140-grain bullets. Developed using the massive 300 Remington Ultra Magnum case, the 26 Nosler hit the shooting scene in 2013 as the first cartridge to bear the Nosler name.

Combined with some of Nosler’s ridiculously high-BC bullets, like the AccuBond Long Range, the 26 Nosler has an extremely flat trajectory and is extremely resistant to wind drift. The only critique of the 26 Nosler is its relatively short barrel life for peak accuracy, which some shooters report being less than 1,000 rounds.

However, if you need an extremely effective extended long-range hunting round, the 26 Nosler will meet all your elk slaying needs with relative ease. 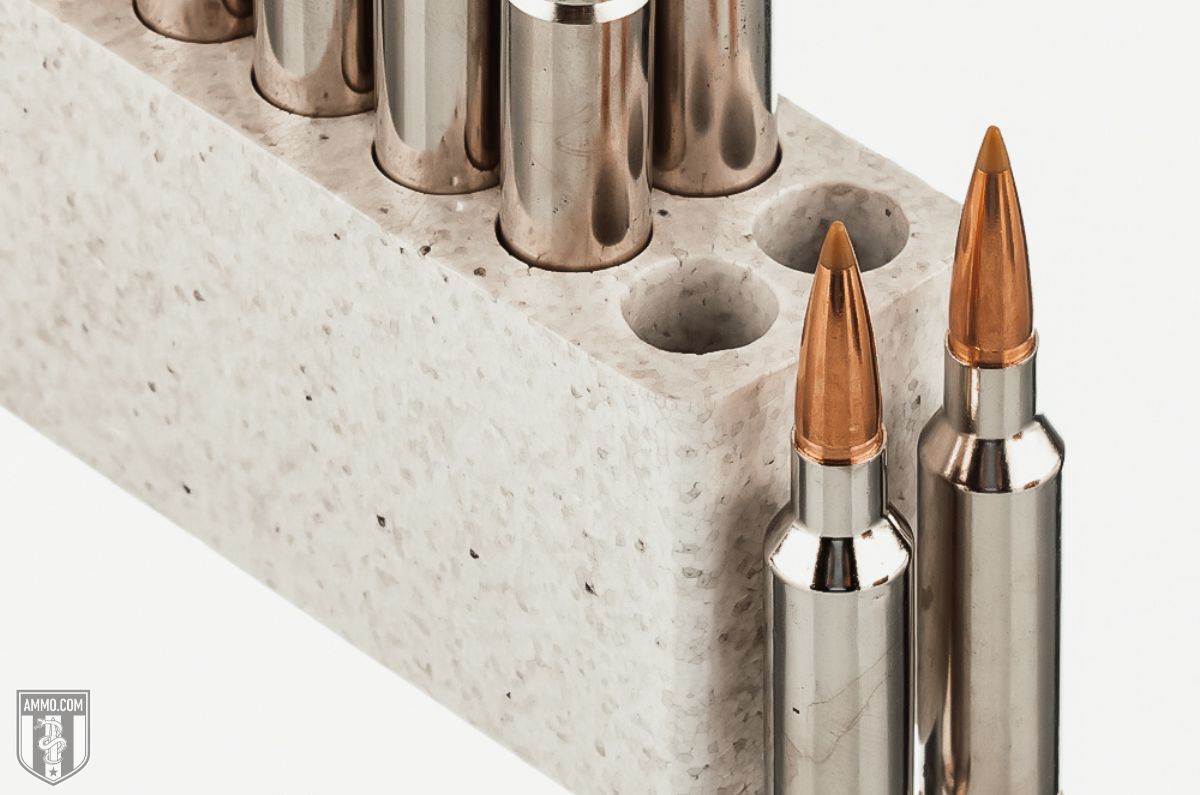 Capable of pushing a 140-grain bullet around 2,950 fps, the 6.5-284 easily outperforms the 6.5 Creedmoor while being only a hair slower than the 6.5 PRC. Although the 6.5-284 can be jammed into a short action rifle, it performs the best when paired with a long action as longer bullets can be loaded without impacting case capacity.

The 6.5-284 Norma was once regarded as the highest performing 6.5 mm cartridge, however it has been unseated from this position due to the popularity and improved ballistic performance of the 6.5 PRC. However, the Norma cartridge is still an excellent option for long range target shooting as well as long range hunting. 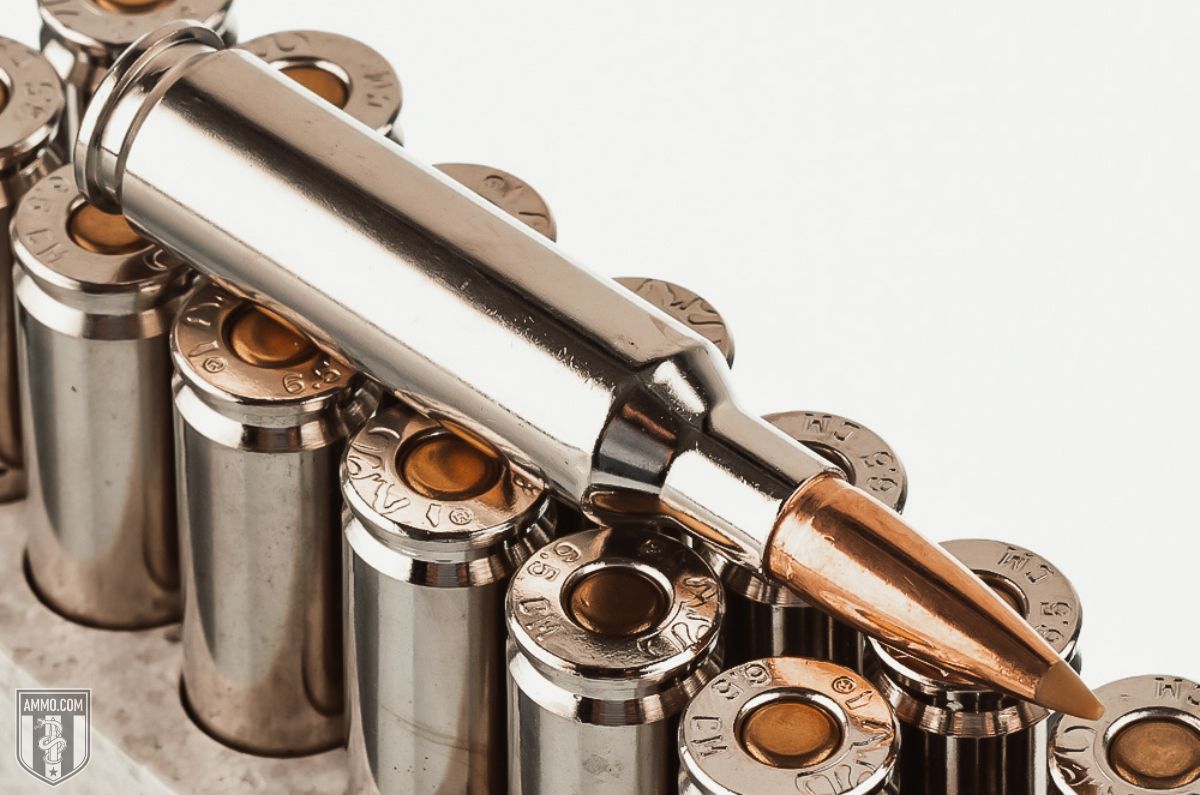 The 264 Winchester Magnum was developed in 1959 and was part of Winchester’s belted magnum line that all descended from the 375 H&H Magnum cartridge. The other Winchester belted magnums being the 338 Win Mag, 458 Win Mag, and the venerable 300 Win Mag.

The 264 Win Mag had a reputation for being an incredibly flat shooting, however its performance was somewhat eclipsed with the release if the 7mm Rem Mag just 3 years later. The Remington offering was capable of matching the performance of the 264 Win Mag, all the while firing a larger diameter bullet.

Today the 264 Win Mag is mostly a dead cartridge, as only a few ammo manufactures like Nosler, Remington, and Hornady produce factory loads for it. However, handloaders can custom make exceptional hunting reloads for the 264 Win Mag with 6.5mm bullets like the Hornady ELD-X, Nosler Accubond, and Barnes LRX that are more than capable enough for elk and deer. 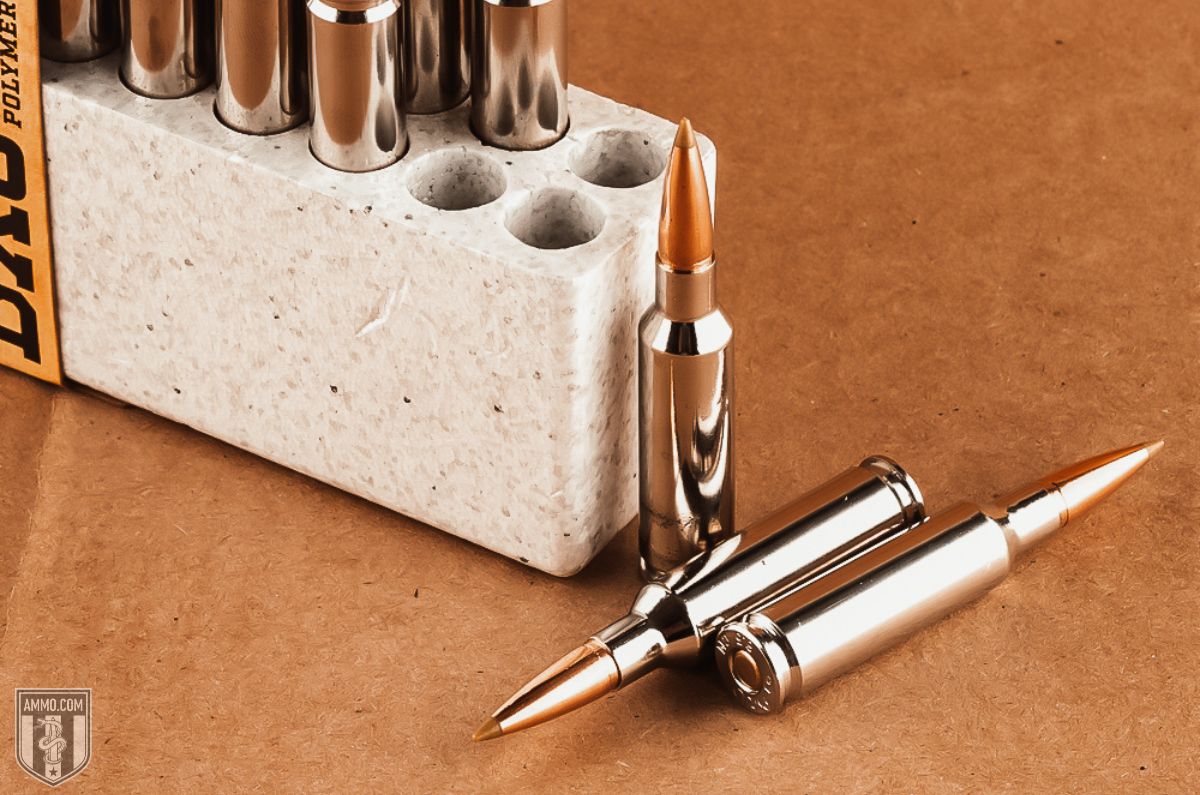 The 6.5-300 Weatherby Magnum is a belted cartridge that was designed to specifically compete with the 26 Nosler. Released in 2016, the 6.5-300 boasts a slightly higher muzzle velocity than its Nosler competition, claiming to propel a 140 gr A-frame bullet at 3,395 fps from a 26-inch test barrel.

Although the ballistics are impressive and the cartridge was met with a lot of fanfare, interest quickly dissipated in the 6.5-300 as it was only available in Weatherby rifles. Combined with concerns about barrel life and higher than average ammunition cost, the 6.5-300 has yet to catch on in the precision rifle community.

Released in 2019, three years after the 6.5-300, the 6.5 Weatherby RPM (Rebated Precision Magnum) tries to fix some of the mistakes they made in their previous 6.5mm iteration.

The 6.5 RPM departs from several Weatherby standards, primarily the cartridge belt has been removed and the radiused shoulder has been done away with. Instead of using a larger bolt face, the cartridge rim has been rebated to fit into a standard bolt face, making a cartridge that was designed specifically for use in a lightweight hunting rifle.

According to Weatherby’s website, their RPM can push a 140-grain Nosler Accubond at 3,075 fps while a lighter 127-grain Barnes LRX can be catapulted at a blistering 3,225 fps. These break-neck speeds combined with sleek, high-BC bullets makes for an incredibly flat-shooting cartridge that works well for long-range hunting.

At the time of writing, currently only Weatherby rifles are chambered in the cartridge, however mountain hunters are taking notice of the cartridge thanks to its incredible ballistic performance and sub-MOA levels of accuracy at longer ranges. 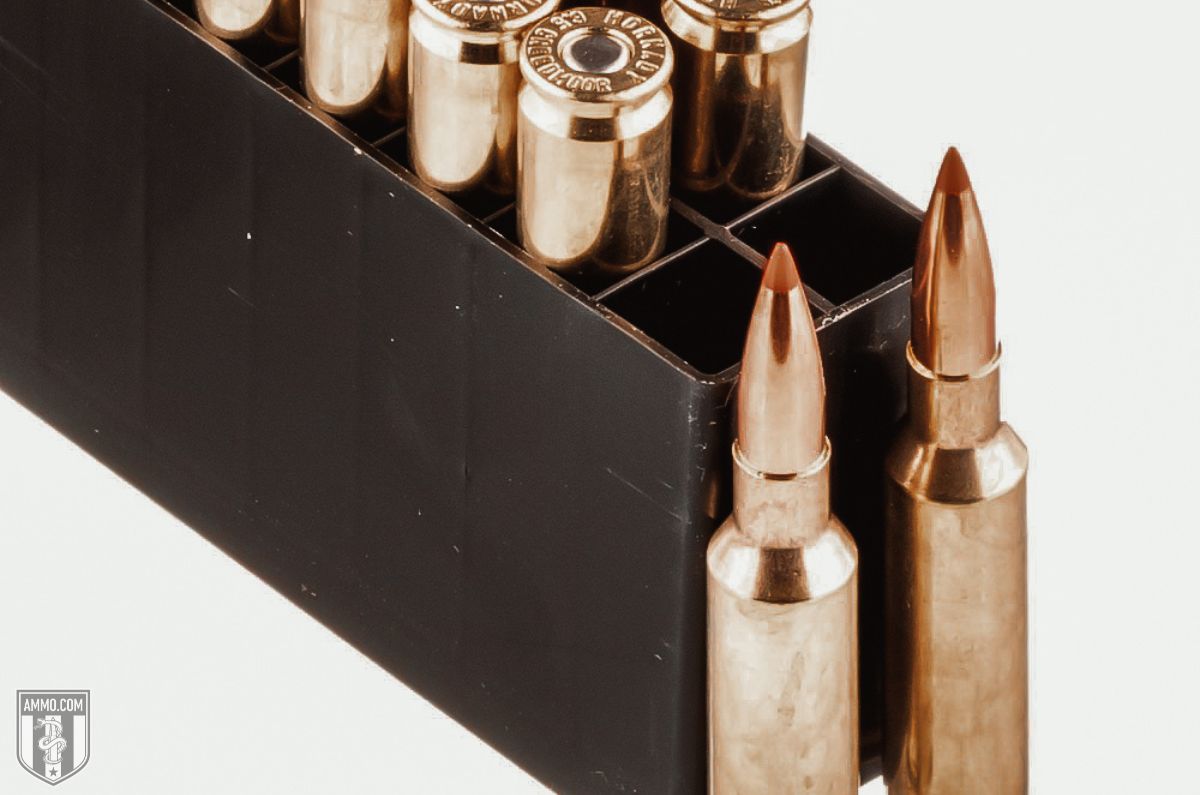 Before Winchester ever dreamed of their “short magnum” line of ammo, there was the 6.5 Remington Magnum. Built to fit into a true short action, the 6.5 Rem Mag was a cartridge well ahead of its time.

Like its sister cartridge the .350 Remington Magnum, the 6.5 Rem Mag was doomed before it was even released in 1965. Remington thought to market their new cartridges in lightweight hunting rifles, therefore they chambered them in their Remington 600 rifles with an 18-inch barrel. This short barrel length did not allow the cartridges to reach their full potential and ballistic performance was subpar at best.

It wasn’t until 50+ years later when the potency of the 6.5 Rem Mag would be appreciated in a proper 24-inch barrel, where it could launch 140-grain projectiles at nearly 3,000 fps. However, by the time this was realized, it simply didn’t match up to the 6.5 Creedmoor.

As such, the 6.5 Rem Mag has faded into the annals of history as a cartridge that had great potential, but just didn’t quite make it.