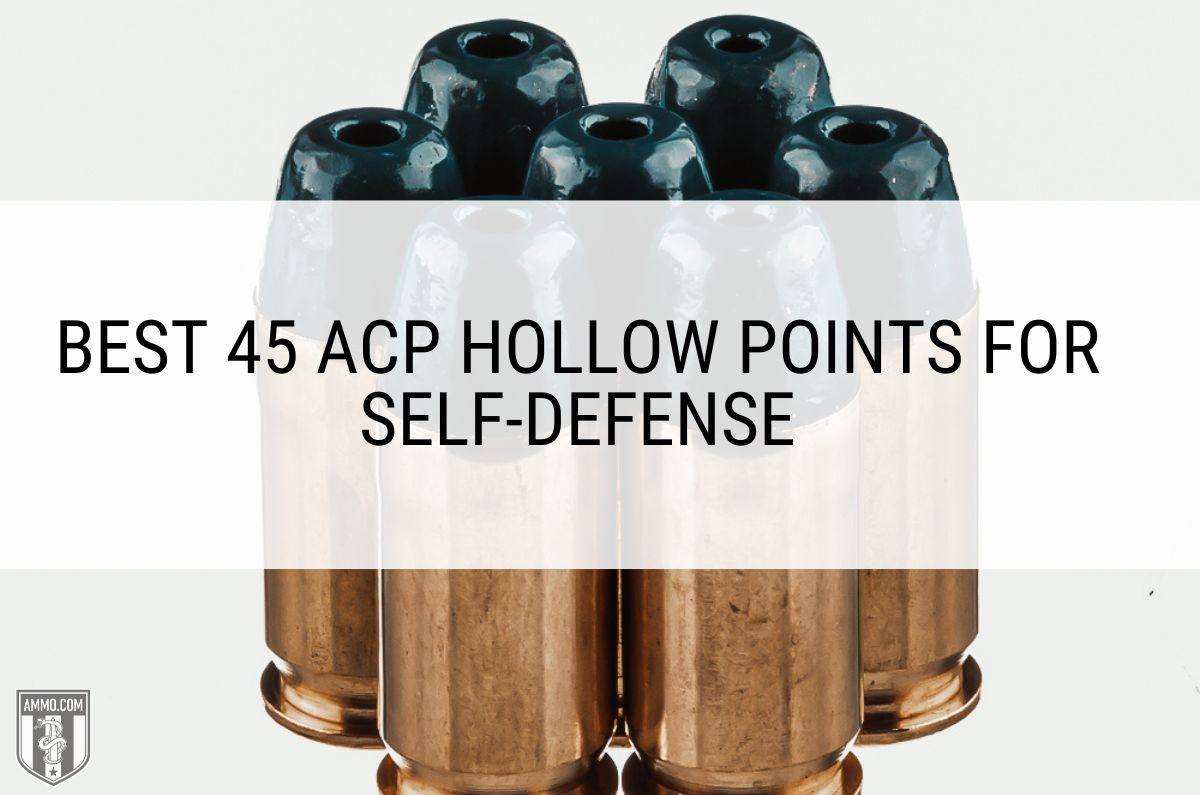 The 45 ACP is one of the best personal defense cartridges; however, using a hollow point bullet decreases the chance of over-penetration and increases the stopping power of this already powerful round.

That brings to question what are the best 45 hollow points?

Below we've compiled a list of what we believe to be the best 45 ACP rounds for self-defense and threw in a few for target practice. 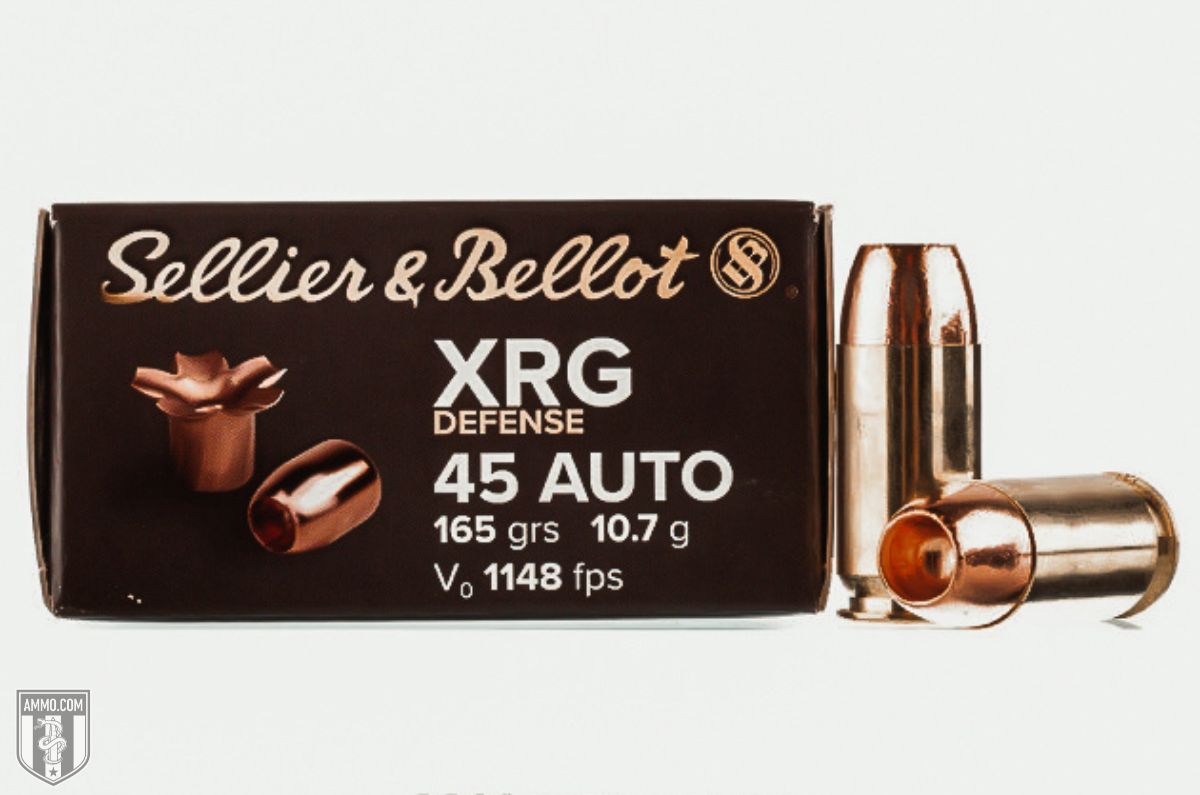 Sellier & Bellot manufactures high-quality ammo for many different calibers and scenarios, so they're a brand you can trust to function smoothly when you're life depends on it.

The biggest concern for shooters who love the .45 ACP because of its stopping power is that the bullet doesn't weigh as much as other 45 bullets, so you might as well shoot a smaller caliber.

To that, yes, the solid copper hollow point bullet doesn't weigh as much as some lead core bullets; however, it still packs a punch without the extra weight and offers reliable expansion on impact to prevent over-penetration and cause more damage.

For the price, you're not going to find a hollow point 45 ACP round with similar ballistics, which is why we chose it as our best 45 hollow point.

You'll be able to practice more often with these rounds because they cost much less than other home defense rounds, so you'll be more prepared if the need to protect yourself or your family arises.

Unlike other less expensive ammo that uses steel cases, the Sellier & Bellot are brass cases, which means you can reload them much easier.

If you believe bigger is always better, then the Remington Ultimate Defense 230 Grain BJHP is the self-defense round you want to purchase.

The 230gr Bonded-Jacketed Hollow Point doesn't have the same ballistic performance as other bullets, but this Golden Saber bullet is not lagging way behind, and it's doubtful the bad guy will be able to tell the difference.

The nickel-plated brass cases are what make this round stand out. The nickel-plating allows for smoother ejections, which means you'll have fewer malfunctions.

The Federal Hydra-Shok Deep 210 Grain JHP is only a slight step down in bullet weight, but the increase in ballistics over heavier bullets might be enough to entice the "bigger is better" crowd.

These Federal Premium rounds are nickel-plated brass cases, so you'll still have a high-end case.

The unique feature of these rounds is the bullet; upon expansion, a concealed point is revealed. This allows the bullet to penetrate deeper, causing as much damage as other hollow-point bullets.

Though these rounds don't have the ballistics of the other 45 ACP self-defense rounds, I use them in my 45 ACP concealed carry because I was more accurate with Hornady Critical Defense after testing them compared to a few different brands.

Ballistics don't matter if you can't hit the target, so I'm willing to sacrifice velocity and energy to be able to hit the target with a very capable round. 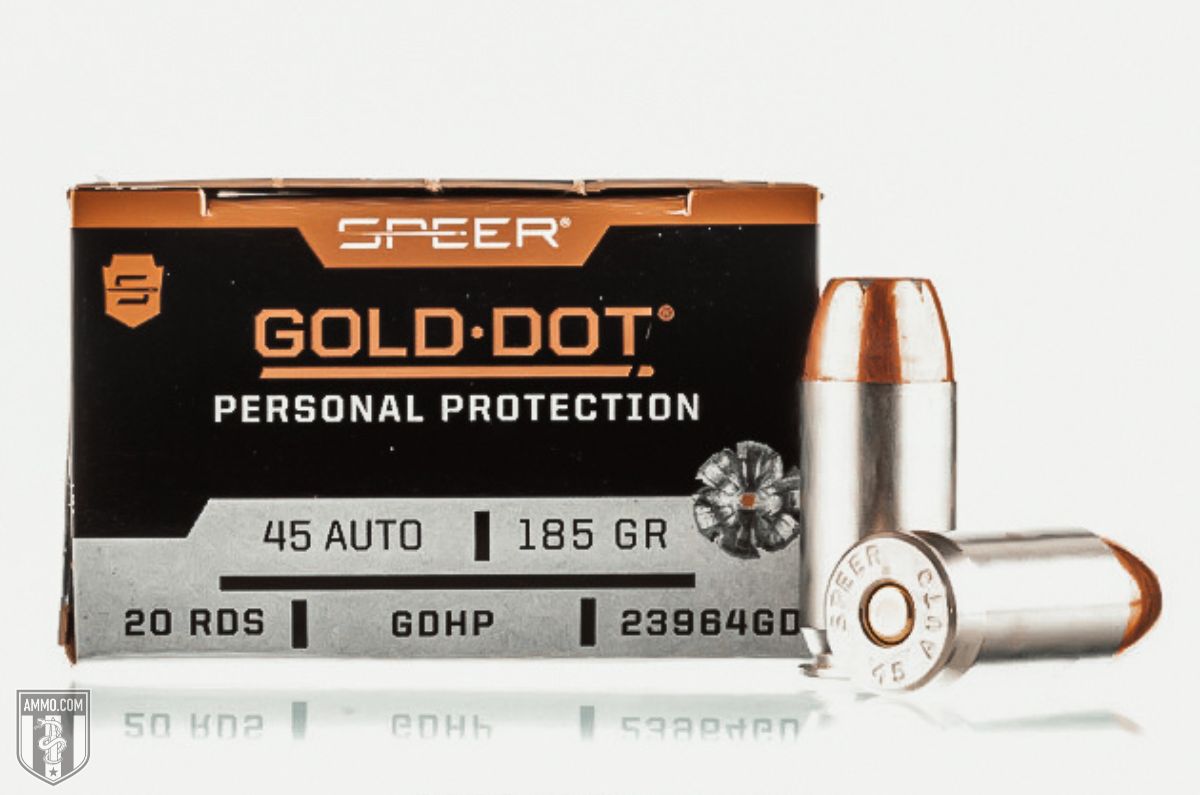 The Speer Gold Dot 45 ACP JHP has a high velocity because the bullet only weighs 185-grains, but that doesn't mean it lacks knockdown power.

If you're sensitive to recoil, these are worth investing in because the lighter bullets have less recoil than heavier bullets.

These rounds are designed with personal protection in mind, and many concealed carriers trust them in their carry guns.

The biggest downside is how expensive these rounds are; however, their design and ballistics make them high-quality rounds worth the price.

The nickel-plated brass helps keep this 45 Auto ammo from jamming because it's smoother than traditional brass.

The solid ballistics and reliability make the Speer Gold Dot 185gr JHP one of the best 45 ACP hollow points for self-defense.

Though the ballistics are slightly lower, the Barnes TAC-XPD 45 ACP +P 185 Grain SCHP is priced similarly to the Speer Gold Dot JHP.

The main differences are the bullet and the +P. The bullet is a Solid Copper Hollow Point instead of a Jacketed Hollow Point, which will keep your gun a little cleaner due to the lack of lead.

The +P means the internal pressure is over the standard amount of pressure, so you'll experience more recoil because it's creating more energy. These are also called "hot rounds," meaning they have more kick than the same ammo loaded at the standard pressure.

Federal HST bullets were designed for law enforcement agencies like the FBI. This means they needed to expand quickly on impact yet penetrate deep enough to take out the bad guy.

The unique feature of HST bullets is the skives etched into the jacket aid expansion upon impact because they are weaker than the rest of the bullet's structure, so they easily peel back.

The Winchester Defender 230 Grain BJHP is another viable option. These are low-flash rounds, making them an excellent choice for home defense when you're in a dark room.

The Bonded Jacketed Hollow Point is designed so that the jacket adheres to the lead core, making it stronger.

The Winchester Ranger T-Series is a similar handgun round for law enforcement officers. The bullet's segment design aids expansion and penetration.

To be confident in your concealed-carry handgun ammo, you must practice with it. Target shooting with the same ammo you plan to carry is best, but that can get very expensive if you use high-end ammunition.

That's where Sellier & Bellot XRG Defense 165gr SCHP rounds come into play. They're very inexpensive compared to other 45 ACP ammo designed for personal protection, so you'll be able to use them at the range without breaking the bank.

The light copper bullet is a downside for some, but it also has a higher velocity and muzzle energy than heavier bullets.

You won't find a better round to train with AND use for protection at this price.

The Sierra Outdoor Master 185 Grain JHP is a little heavier; therefore, the ballistics will fall slightly.

These rounds are designed for the outdoor enthusiast or hunter looking for protection from predators such as bears; however, they can be used to defend your home from uninvited guests intending you harm.

Though the Prvi Partizan 230 Grain FMJ is not a hollow point, it's inexpensive and makes an excellent target-shooting round.

This full metal jacket bullet offers comparable ballistics as a hollow point bullet but at a much lower price, so you can stay at the range longer or visit more often.

Once again, the Federal American Eagle 230 Grain FMJ is not a hollow point, but the heavy 230gr bullet will give you a comparable feel and performance of a 230gr hollow point at a much more affordable price.

How to Choose the Best 45 Hollow Point

Choosing the best 45 ACP hollow point ammo doesn't have to be difficult if you keep a few things in mind.

There's no reason to go over budget when buying ammo; yes, it's expensive, so we must be much more thoughtful when purchasing it.

First, establish how much you can spend on ammo without taking from your necessities. Then buy as much ammo in that price range as possible.

You'll find some tips below on how to get more bang for your buck!

If you're sensitive to recoil, the 45 Automatic Colt Pistol probably isn't for you. However, some of us enjoy shooting it but tend to avoid the +P and +P+ ammo because it can get a little obnoxious.

Know your limits and comfort zone and stick with them. If you're not comfortable shooting when practicing, you're not going to be comfortable in an intense situation, which might lead to you hesitating and a terrible tragedy.

Use ammo that you are accurate and comfortable with, and then worry about stopping power.

Your ammo is no good if it doesn't go off or gets jammed all the time. Choose as high-quality ammo as your budget allows you to get reliable ammo.

You'll also find that your Glock cycles different ammo better than your Browning 1911, and vice versa.

This means you'll need to do a little testing using several different brands and bullet types to see which ones you're gun shoots most reliably.

How to Save Money on 45 ACP Hollow Point Ammo

As promised, there are a few ways to save money on ammo. However, they often require a more significant investment upfront, but more than pay for themselves in the long run. 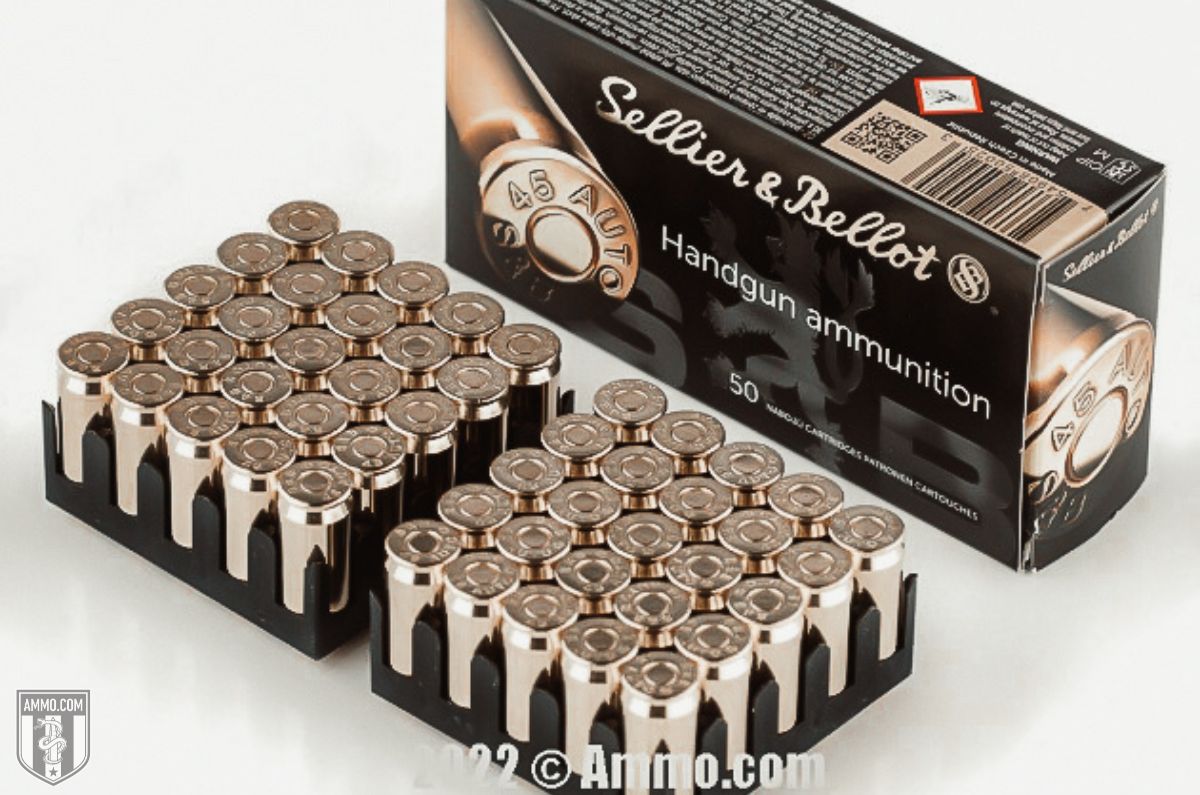 Buying bulk 45 ACP ammo initially costs more, but when you break it down to cost per trigger pull, you realize that manufacturers will give you an excellent deal when you buy a larger quantity.

You might receive as much as a $0.15 per round discount depending on the amount of ammo you buy. While that doesn't sound like much, when you consider firing hundreds of rounds at the range, the 15 cents quickly adds up.

Buying bulk ammo is the way to go if you shoot a lot.

Another option for the shooting enthusiast is to reload your spent brass. Once again, purchasing the reloading equipment and supplies is expensive, but once you've dialed in your formula, you can knock out rounds at a much cheaper rate than factory ammo.

You can reuse the brass from the rounds you bought in bulk to save more money.

The 45 ACP is a favorite of many shooting enthusiasts. This means companies are willing to give us a variety of bullet options.

Below you'll find a summary of the most common HP bullets.

The Hollow Point is a bullet with a concave nose that expands on impact. They're commonly found in hunting and defense rounds. However, there are several technological advancements, so it's rare to find a true hollow-point bullet.

There are many other better options, so most manufacturers use those.

The Jacketed Hollow Point is much more common than the traditional hollow point. It's less expensive than the other types of hollow points because it's the least advanced.

However, it still offers concealed carriers and hunters an excellent option for maximum damage with reduced risk of over-penetration.

The jacket is a metal, often copper (CPHP), that surrounds the lead core, which helps it to better feed into semi-auto pistols. 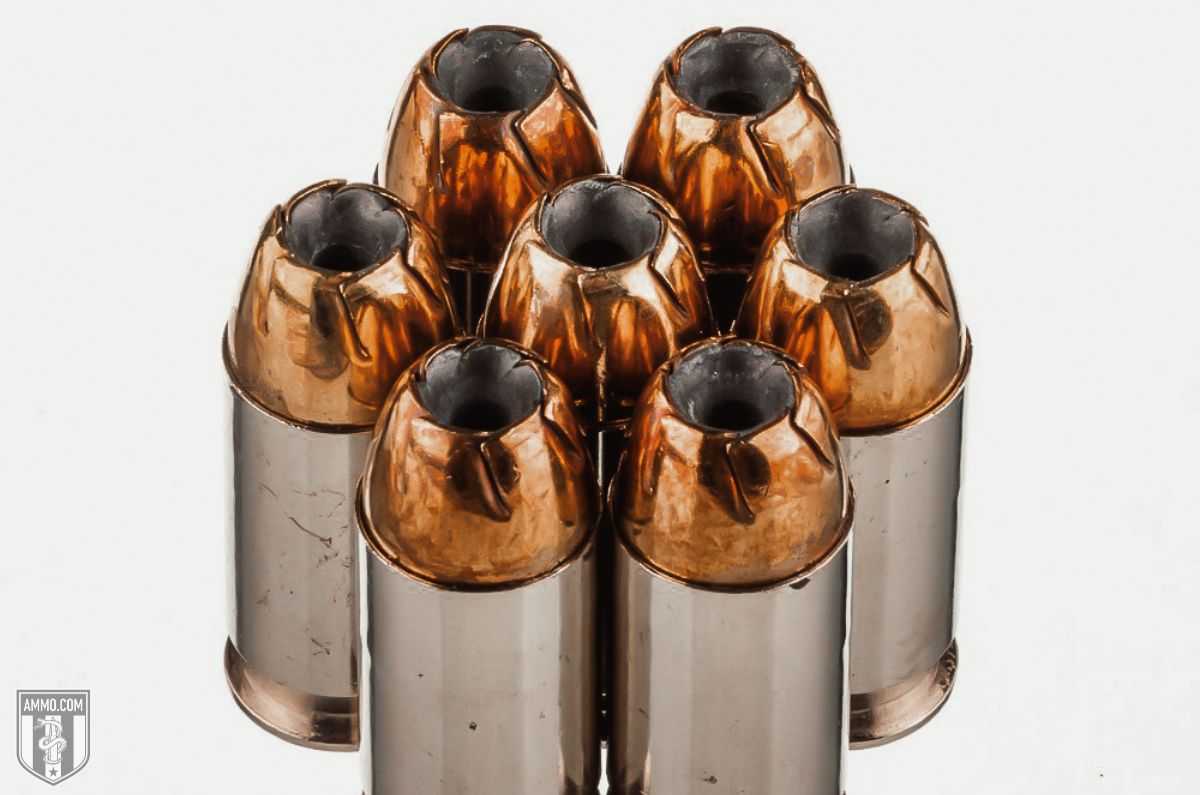 The Bonded Jacketed Hollow Point is a jacketed hollow point that has been chemically joined to the lead core.

It strengthens the bullet, as the jacket is much less likely to be separated from the lead.

For Solid Copper Hollow point bullets, there is no lead. The bullet is made entirely of copper, which holds its shape and feeds better, but it's more expensive.

Magtech and Barnes are two of the most well-known SCHP bullet manufacturers.

While there are many great 45 ACP hollow point options, the Sellier & Bellot XRG Defense 165gr SCHP is the best option because it's inexpensive and its ballistic performance holds up.

However, you might find the best 45 hollow points are different for your gun, so be sure to test out a few options available at Ammo.com before settling on one!