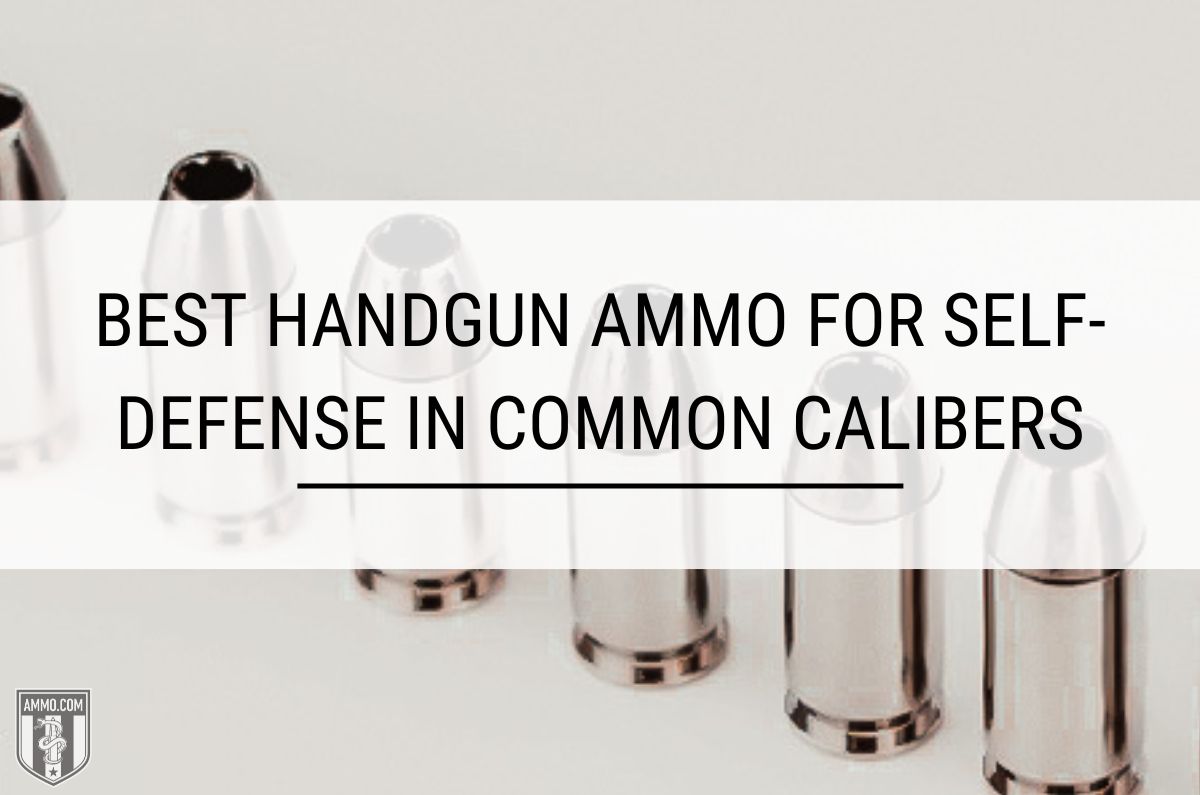 Choosing the best handgun ammo depends on the caliber you're using and your circumstances.

I primarily use my handguns for personal defense and target shooting, so that's what we'll focus on in this article.

The four most significant factors I focus on to determine the best are price, bullet weight, muzzle velocity, and muzzle energy.

However, there are other contributing factors, such as brand credibility and functionality. 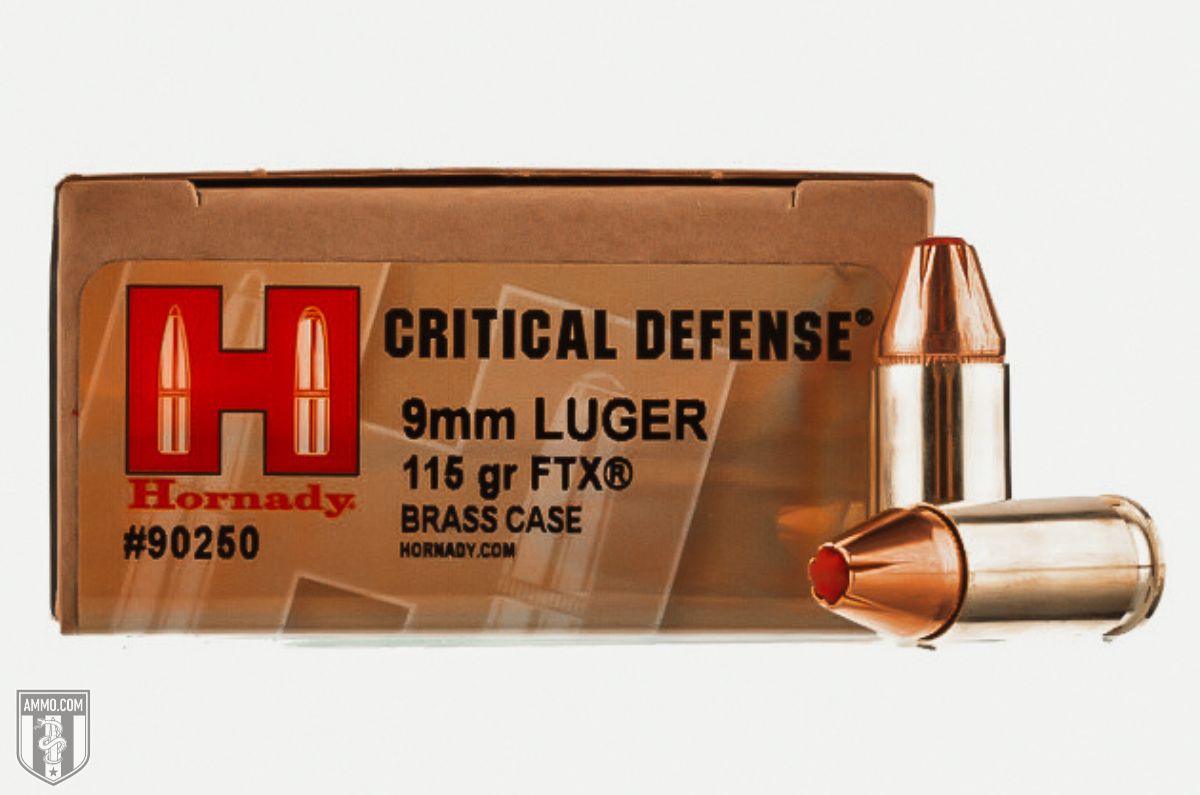 The Hornady Critical Defense rounds are one of the most loved rounds by full-size pistol concealed carriers and law enforcement agencies, regardless of the caliber. I just happen to think 9mm pistols shoot one of the best self-defense rounds due to their high mag capacity and a medium amount of recoil.

These are the rounds I currently have in my concealed carry 9mm Luger Smith & Wesson Shield. I trust them to be accurate and fast, and take out a threat if the circumstance calls for it.

I consistently shoot better groups at the range with these rounds than other personal defense rounds, maybe because I'm more comfortable with them, but I trust them to protect my family and myself.

The biggest downsides are that they're expensive, as most defense rounds are, and they're snappier than target loads.

Because I don't shoot these every time I visit the range, the expense isn't as much of a concern, and they still kick less than a .45, so don't assume they're overpowering. That's why I and many others consider these the best self-defense handgun ammo.

However, it won't have the knockdown power we've come to expect from modern 9mm pistol rounds.

Going in the other direction, the Federal Hydra-Shok Deep 135 Grain JHP has a heavier bullet, which means more recoil and a lower velocity. However, the muzzle energy is increased, so in theory, it will pack more of a punch than the lighter bullets.

Best .45 ACP Round for Self-Defense 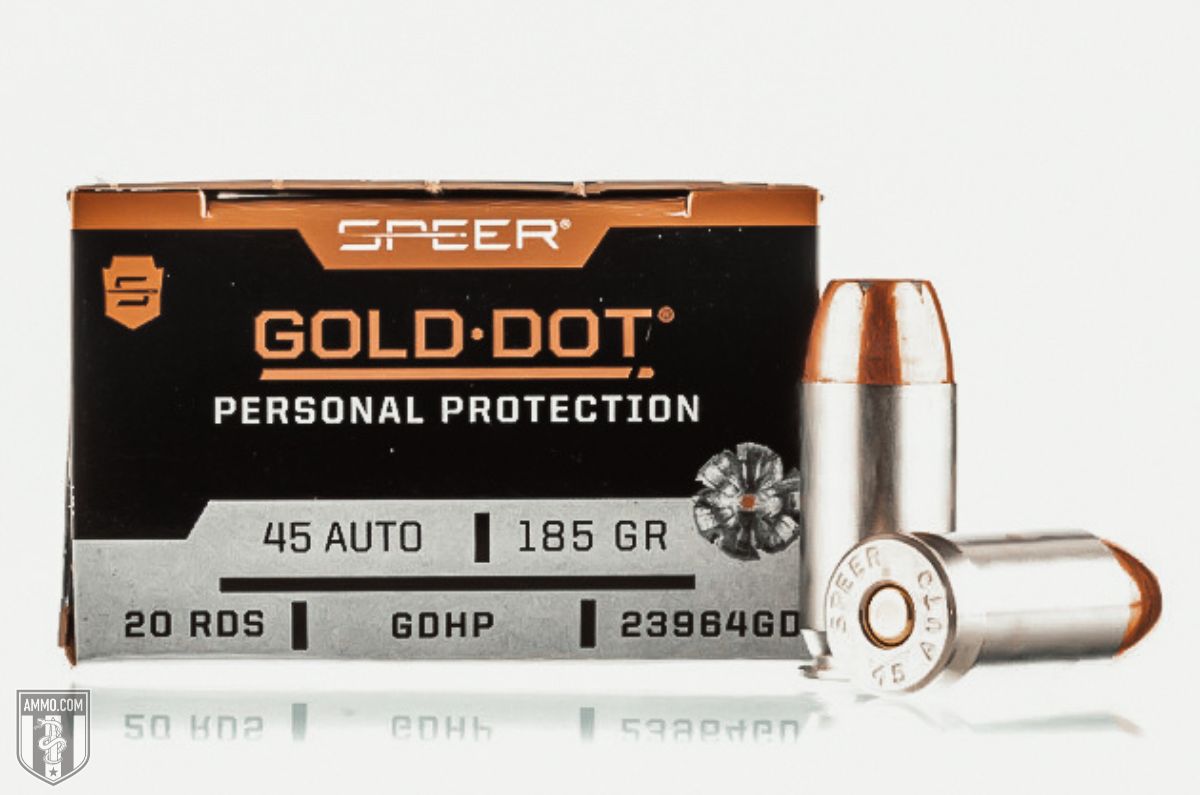 The Speer Gold Dot is fast and hard-hitting when compared to other JHPs of similar weight. This means you'll be able to end the threat faster, even if it's just by a second.

The recoil isn't terrible, but that's the main reason most people don't like shooting a .45, so be prepared for some recoil out of these rounds.

Jacketed Hollow Point bullets are the standard for self-defense bullets; though they're not the latest design, they're time-tested, so you can know they'll do the job.

The biggest downside for these rounds is how expensive they are; they are some of the most costly .45 ACP rounds, but the cliche is true, you get what you pay for. So I don't mind paying a little extra for high-quality ammo.

If you're ready to embrace your gun's recoil, the Remington Ultimate Defense 230 Grain BJHP is the round to test it with, thanks to its 230gr heavy bullet. These Remington Golden Saber rounds are less expensive than the Speer Gold Dot, but you're sacrificing speed and getting less muzzle energy.

As I said above, the Hornady Critical Defense 185 Grain FTX JHP are some of the best self-defense rounds in any caliber, so it's no surprise I'm mentioning them here! Despite having the same grain bullet, they're not as fast or as hard-hitting as the Speer Gold Dot, but they're less expensive. 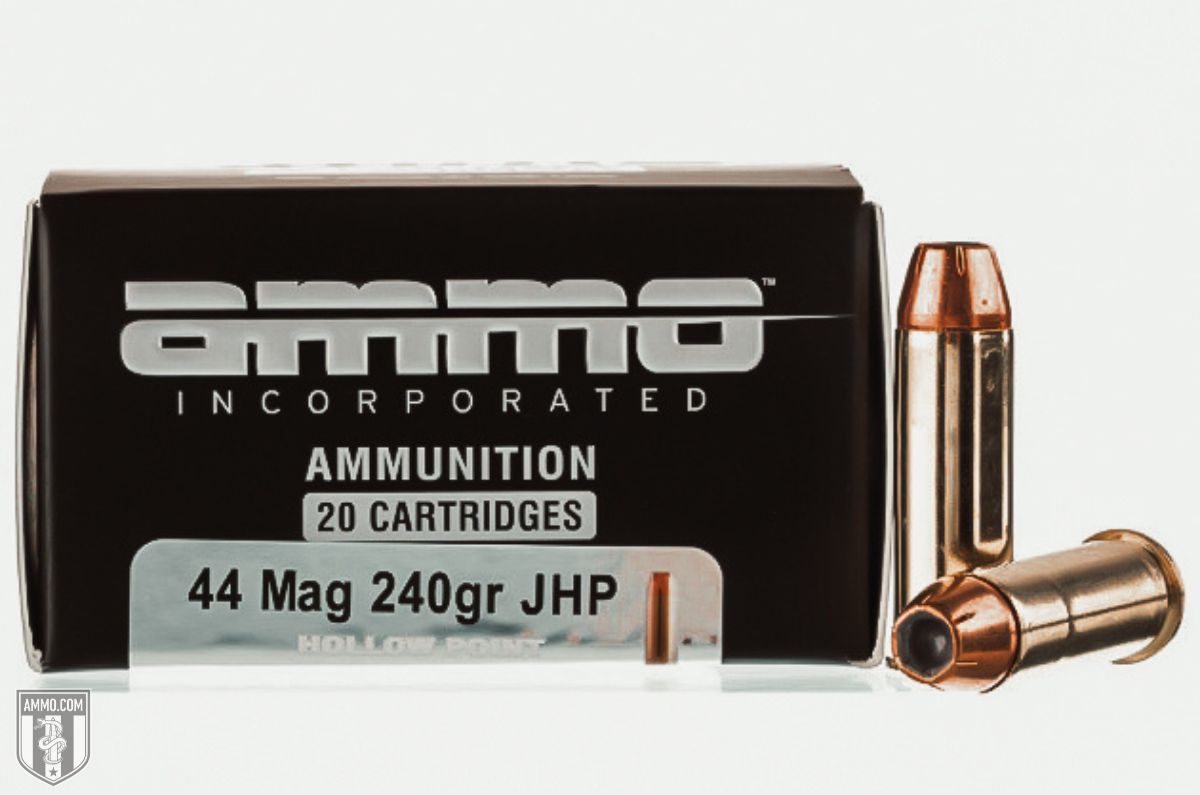 It's still loved by many big game hunters, especially those looking for a caliber capable of quickly stopping a charging bear because it's fast and can quickly penetrate the bear's vitals before it causes the hunter any harm.

With great power comes great recoil, so I'd recommend practicing with it a lot. Because heavy recoil and an intense situation mean accuracy will suffer.

These rounds can stop the threat of an angry bear, and they're not ridiculously priced.

For something with a little less recoil, the PMC 357 Magnum 158 Grain JSP is the way to go. Though it's still a magnum, so you should expect higher than average recoil, the 357 Mag is powerful enough to stop a bear with less recoil than the 44 Mag.

I prefer to use hollow-point bullets, but the Jacketed Soft-Point bullets will quickly cause a lot of damage, and many hunters prefer soft-point bullets, especially in states that don't allow hunting with hollow points. 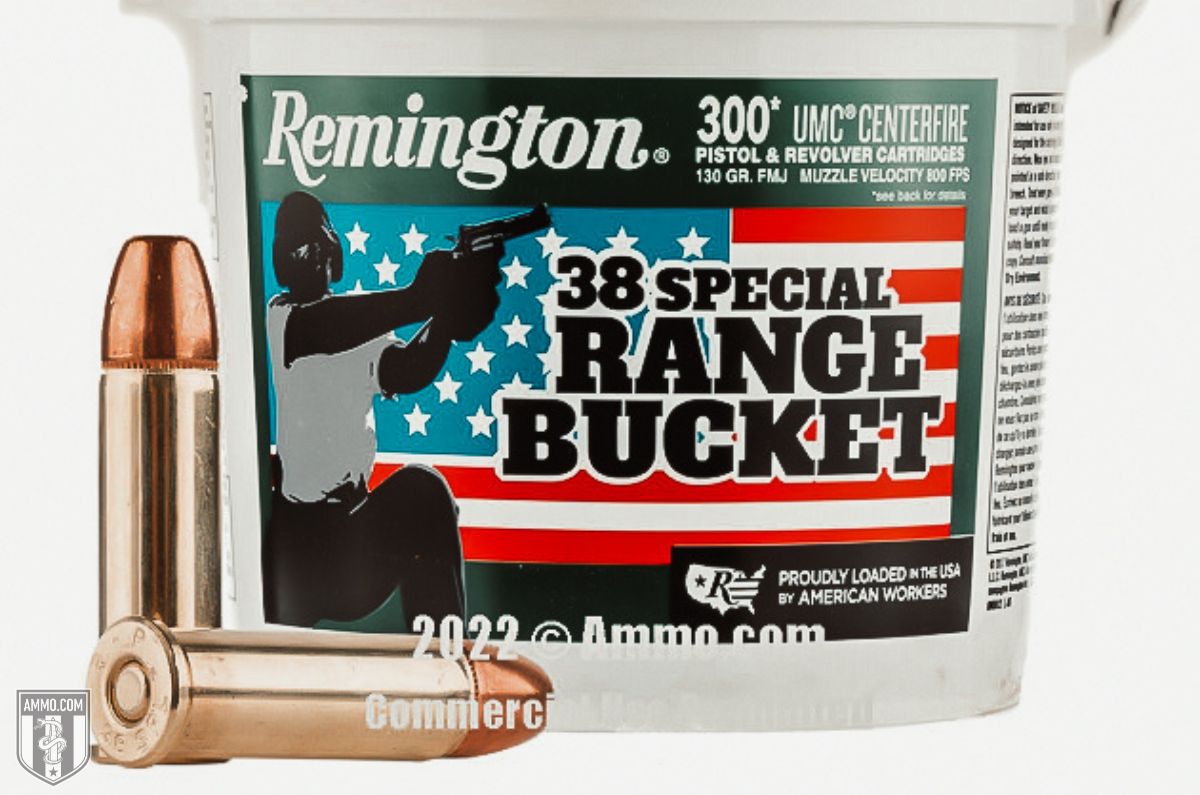 Remington has been in the firearms and ammunition industry for a very long time. However, in recent years their product quality has declined. For target shooting, this isn't as much of a concern, but we still want quality rounds for target practice.

The 38 Special is a low recoil round, so your hands and wrists won't get sore from shooting all day, and neither will your wallet. These rounds are half the price of some 9mm and 45 ACP rounds, so you can stay at the range twice as long and spend the same amount of money on ammo.

The biggest problem is that to get these rounds at the lowest price, you'll need to buy them in bulk.

The Remington UMC rounds are suitable for practicing with a slightly smaller caliber than you typically carry.

Though they're not as cheap as the rounds above, the Federal Range. Target. Practice. 45 ACP Ammo 230 Grain FMJ is nearly as cheap as it gets for 45 ACP ammo. I wouldn't want to carry these rounds for self-defense, but they're great for training purposes.

If you want ammo that has comparable ballistics to your 9mm carry ammo, check out Black Hills Ammunition 9mm 115 Grain FMJ. These rounds will provide a similar feel to your carry ammo, but they won't cost nearly as much, making them great for target practice and self-defense training. 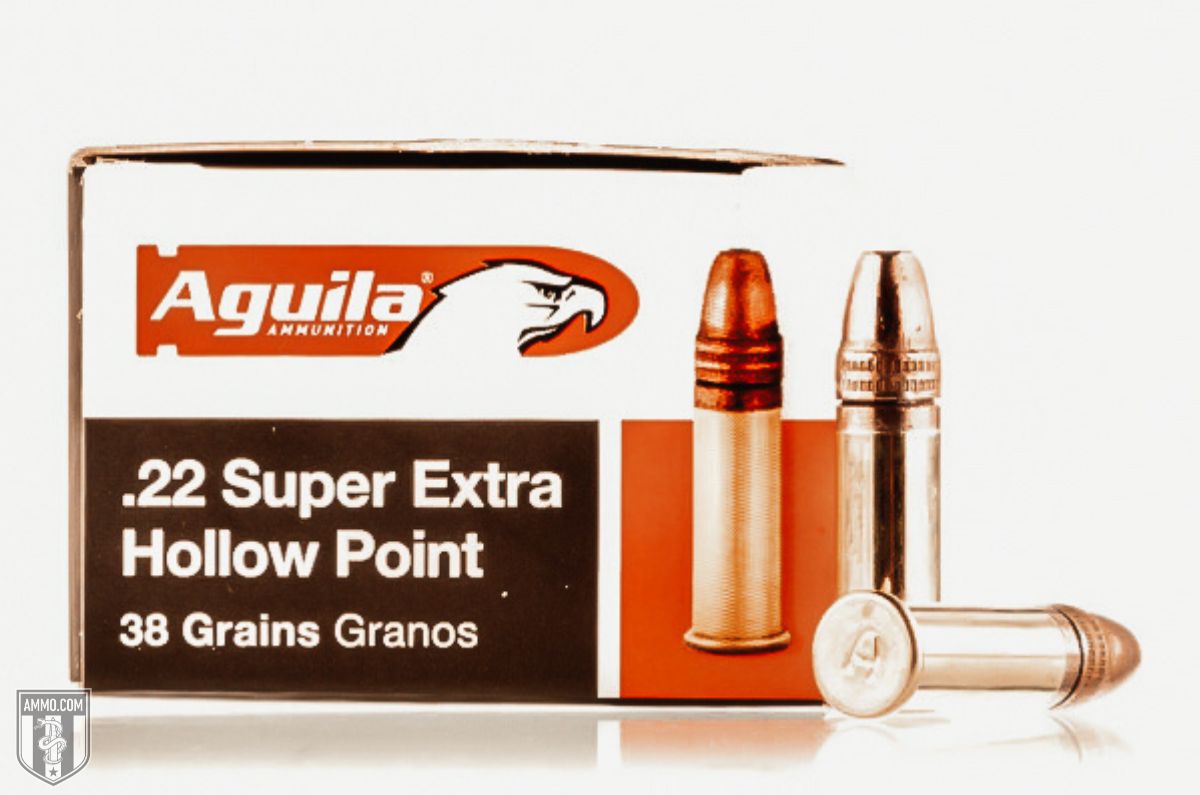 For the price and the reliability, it's tough to be these Aguila Super Extra 38gr rounds. When shooters discover this brand, they are most often pleasantly surprised at the quality of ammo for the price.

The Copper-Plated Hollow-Point bullets make these rounds feed better in semi-auto handguns, so you won't have to deal with as many jams as you would with soft-point bullets.

The biggest drawback to these rounds is that they're not the fastest on the market. However, for plinking or small varmints, these rounds are plenty fast.

At a similar price, the Fiocchi 38 Grain CPHP rounds offer shooters similar ballistics. So if you find that your gun doesn't like the Aguila rounds, test these out. However, you'll be losing some muzzle velocity and muzzle energy.

The CCI 40 Grain Copper-Plated Segmented Hollow-Point (CPSHP) is for shooters looking for a quiet round. Due to the focus on noise reduction, the ballistics suffer, but if you need 22 ammo that's incredibly quiet, these rounds are worth purchasing.

How to Choose the Best Round for Self-Defense

Choosing the best handgun caliber for self-defense is critical. You need a firearm you're comfortable with and trust.

Next comes choosing the best self-defense round. Many shooters judge it based on the brand or bullet type, which are critical considerations. However, I believe the price, stopping power, amount of recoil, and firearm preferences are the most important.

I splurge a little in this area because I don't always train with my personal defense ammo; instead, I use rounds similar in ballistics and save my expensive ammo for the moments I need it.

If your ammo doesn't have the power to stop a threat, then I don't think it's worthy of being called self-defense ammo.

I want the rounds that will stop the threat as fast as possible. If a bad guy or something intends to harm my loved ones or me, I don't want to give them any more time than I have to to stop them.

Self-defense rounds are known for increased recoil to achieve the ballistics needed to end a threat quickly.

Find a round that you're comfortable with the amount of recoil. It's better to be more accurate and comfortable with your firearm than have a powerful gun you're inaccurate with and scared to pull the trigger because of the kick.

The last thing you should consider is what ammo your gun prefers. I've found my guns cycle certain brands better than others. For instance, your Ruger will cycle the same Hornady Critical Duty ammo differently than someone else's Glock, which cycles it differently than another person's Sig Sauer.

I don't want to be forced to clear a jam in an intense home defense situation, though I might train for it. That's why I tested out several different brands, bullet types, and weights to see which one I was most accurate with, and my gun cycled the best. Then I trusted the test results and currently use the ammo that performed the best.

How to Save Money on Handgun Ammo

As we all know, ammo has gotten expensive and will only get more expensive. Here are a couple of ways to save money on ammo in the long run.

Buying bulk 9mm ammo saves you a little money per round. However, it costs more upfront because you're buying larger quantities.

So if you've just got a nice bonus at work, it might be worth stocking up on ammo all at once to get the bulk discount. 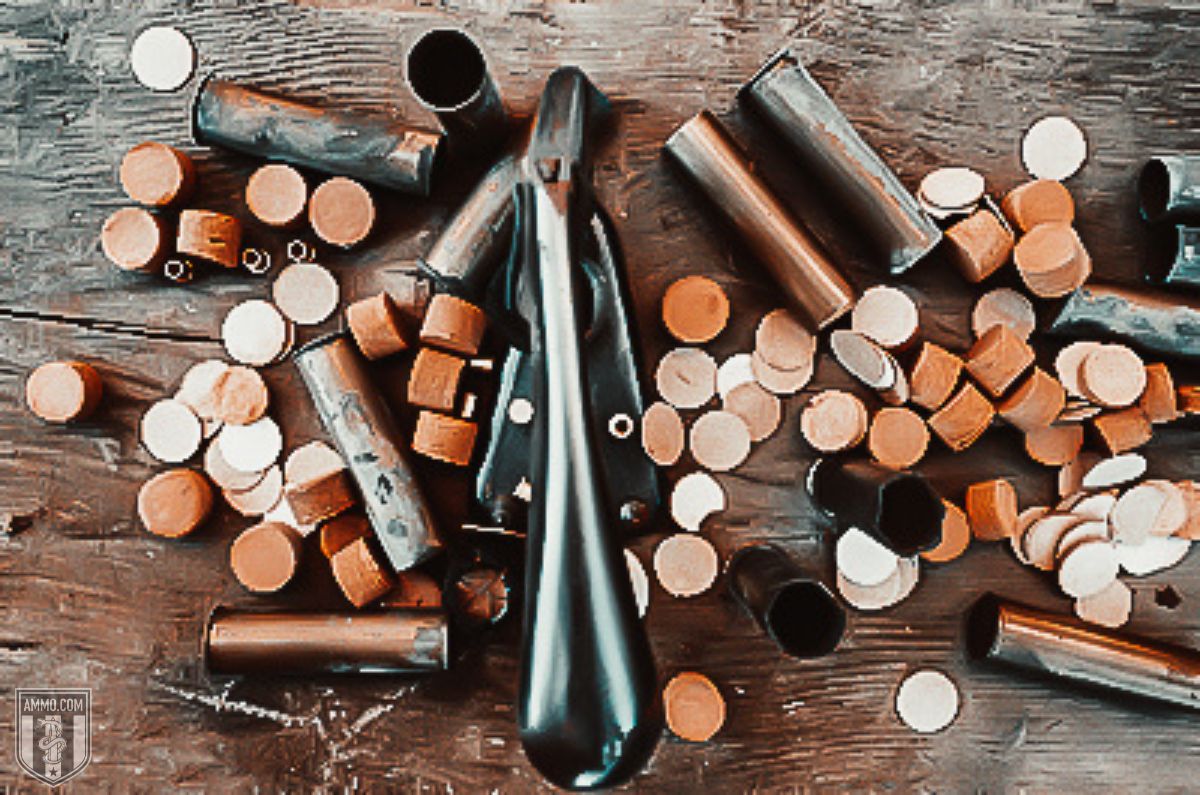 Another way to save a little money on ammo is to reload the spent brass. Reloading gives you complete control over crafting the perfect round for your weapon.

It's also cheaper in the long run because you're buying the supplies in bulk and doing the work yourself.

Once again, the upfront cost is high, but you'll begin to recoup it quickly as you hammer out rounds.

If you're really dedicated, you can buy bulk 45 ACP and then reload that spent brass, so you double up on your savings!

The bullet type is one of the most critical decisions one must make when choosing the best self-defense round.

The bullet type often affects the price and performance of the round.

The hollow point is the standard for self-defense ammunition; however, many variations of hollow point bullets exist.

Below you'll be able to quickly reference which ones are best for which situations. 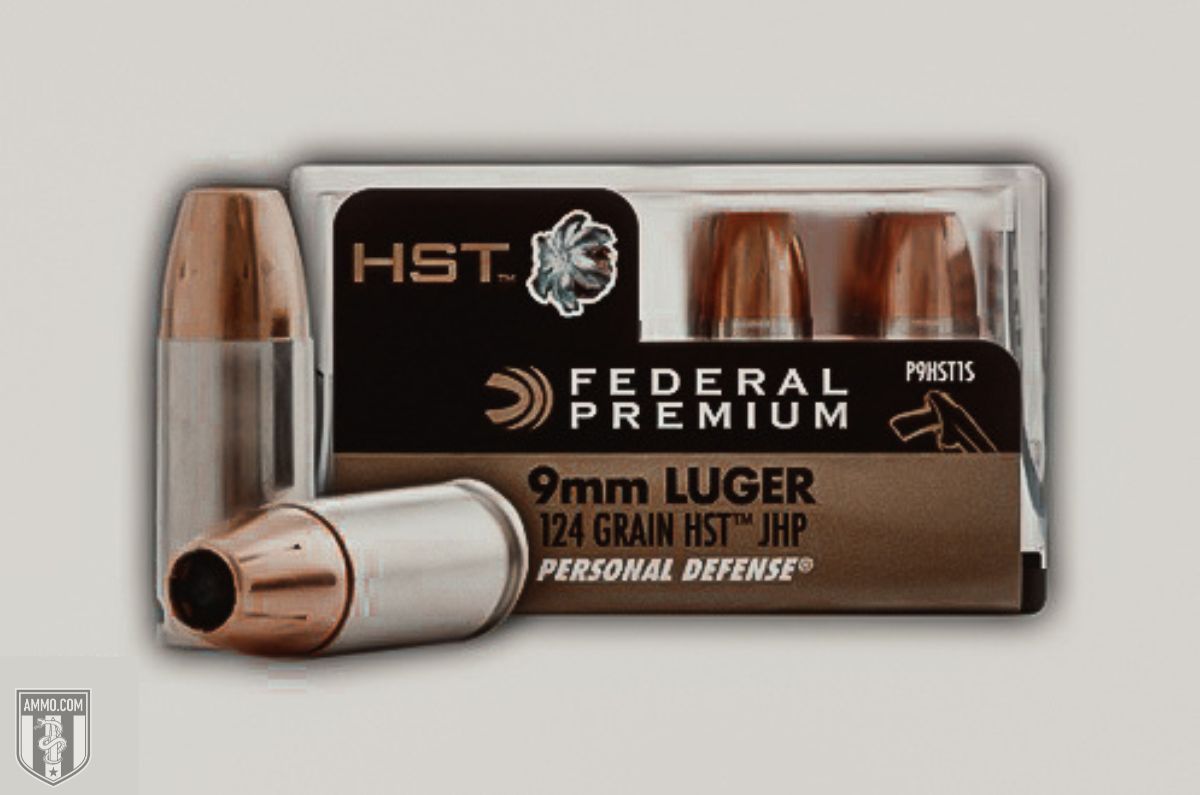 The hollow point bullet is a bullet that looks like a cone, meaning the tip of the bullet has a concave shape that aids in the bullet's mushrooming effect.

These bullets make good hunting and defensive loads; however, recent advancements in bullet technology mean these are no longer the best choice, but if it's all you can afford, they still work. You don't have to worry as much about over-penetration compared with FMJs.

The Jacketed Hollow Point is the next step up from the traditional hollow point. It's a hollow point with a metal jacket around the lead core. This metal jacket holds the bullet shape better, which improves accuracy.

These are similar to a full metal jacket, except that the JHP has an opening for the hollow point.

This bonding doesn't allow the jacket to separate from the core, creating a more significant wound channel and better penetrating heavy clothing. 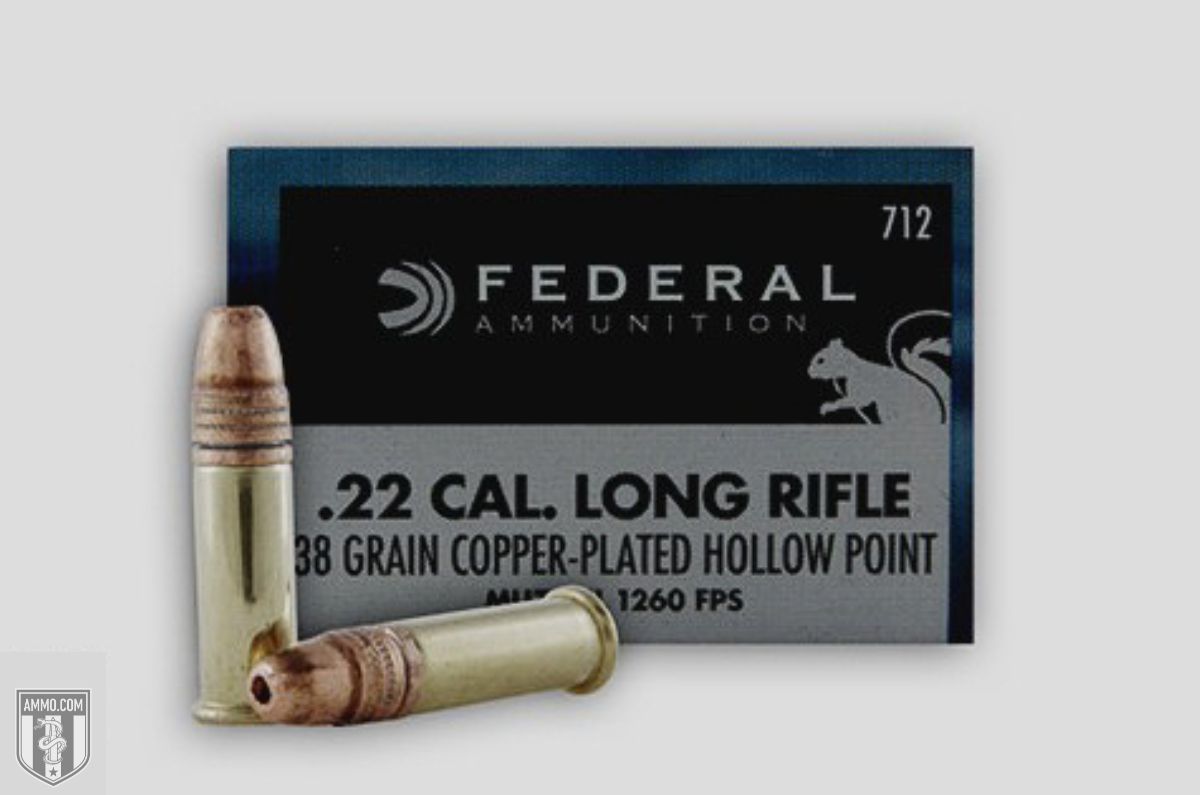 The Copper-Plated Hollow Point is similar to a jacketed hollow point because the copper-plating helps hold the bullet shape better that only lead.

Winchester and Federal Premium are a couple of the many manufacturers of CPHP ammo.

Solid Copper Hollow Point bullets are great for hunting in lead-free areas because the bullets don't have lead in them.

These bullets tend to be slightly more expensive than traditional lead bullets. Magtech and Barnes are the most well-known SCHP manufacturers.

While choosing the best handgun ammo for self-defense is essential, ensure you're accurate with it. If you can't hit the bad guy, then the ammo is no good.