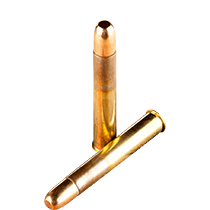 Live Inventory
Introduced in the late 1800s as a black powder cartridge, the .500 Nitro Express continues to be used in Africa and India for hunting the largest, most dangerous game on the planet. This includes the rhino, cape buffalo and elephants. Learn More

The .500 Nitro Express was designed to be fired from the most common hunting rifles of the late 1800s and early 1900s, including single and double barrel rifles. Today this cartridge is for sale for double action and bolt action rifles made by some of the most excellent rifle makers in Europe – including Holland & Holland, Hambrusch and Rigby.

Cordite: The Father of the 500 Nitro

Invented in 1889, one of cordite’s main features is an increased performance envelope at the cost of increased pressure. This meant that any rifles using the new material required stronger barrels that could withstand the pressure of the new explosive material. The term “nitro” was, at the time, commonly used to distinguish cordite-based rounds from black powder rounds, as these two materials were anything but interchangeable. The “express” in the name refers to the greatly increased velocity of the round resulting from this then-new technology.

The Quintessential Round for African Safari

The 500 Nitro found itself a very important niche: If you were going to Africa on safari, looking for a round that would drop the biggest and most dangerous creatures that the Dark Continent had to offer, the 500 Nitro was 100 percent what you needed. Charging, dangerous game could be dropped at over 100 yards out thanks to the 570 grain bullet sectional density.

This round is probably overkill for any game commonly hunted in North America. However, if you want to be extra sure that the charging kodiak or bison is going to go down, the 500 Nitro can certainly get the job done.

500 Nitro Express was developed from a black powder ancestor, the .500 Black Powder Express – which was great for deer, antelope or boar, but was not recommended for the more dangerous game of the African savannah.

The most popular rounds for hunting this kind of dangerous game in the pre-smokeless powder era were 8 bore rounds and, for some adventurous types, 4 bore. The 500 Nitro, however, could be used in far lighter weapons than either of these – the typical 500 Nitro rifle is about 11 pounds. The jacketed round meant that the impact could be delivered with far greater precision. And while the 600 Nitro was more popular, more often than not, the safari big-game hunter would not be carrying that weapon. Who wants to ask for a rifle when there’s an elephant charging at them? Combine this with less recoil and less expensive ammunition, and it’s no wonder that the 500 Nitro outperformed its bigger brother on the market.

The safari experience became crystallized around the 1830s, and was a rite of passage for those of means during the height of the Pax Britannica. Major Sir William Cornwallis Harris was the man who firmly established the safari template: Waking at dawn, brisk walking all morning, an afternoon of rest, finished with a formal dinner at night and storytelling over tobacco and drinks. This is the pattern still used today, even among those who venture to Africa for a photographic safari rather than one spent bagging the continent’s most dangerous game.

The Fall and Resurrection of the Safari

The success of the decolonization movements in the former British Empire are part of the reason for the fall of the 500 Nitro Express into obscurity. This is because, as the British Empire shrunk, it became increasingly difficult for Brits to engage in big-game hunting in Africa. Thus, the need for this round declined. Kynoch was the only company left producing the round by the 1960s. By the 1970s, no one was making 500 Nitro rounds anymore. This, combined with an increasing social stigma against hunting African megafauna, largely made the practice extinct.

Still, as is often the case, what is old is new again and African safaris came back into style in the 1990s. In its heyday, British big bore barely sold at all to American audiences who did not have the privilege of visiting and hunting in the African colonies. However, when British big bore rounds came back in the 1990s for the African safari revival, the demand was largely centered in the United States. Companies such as Hornady, A-Squared and Federal offer ammunition in the 500 Nitro. Eley purchased Kynoch during the Dark Ages of British big bore and has since licensed the brand name to Kynamco in the UK, which sells the classic Kynoch-style 500 Nitro today. Norma of Sweden sells the round out of Scandinavia.

The main appeal of the 500 Nitro isn’t so much its power, though. While it certainly has enough of that, the main appeal for big game hunters is the accuracy and the weight of the double rifle. Walking around the African bush is no mean feat, even when unencumbered by a giant elephant gun. The 500 Nitro is a round for weapons that can easily be carried for hours, chambered quickly, and fired intuitively – even after a long day of trekking through the bush.

As impressive as the ballistics are for this century-old cartridge, the .500 Nitro Express deserves the attention it has garnered. The cartridge fires a Hornady Dangerous Game Solid bullet weighing 570 grains out of the muzzle, traveling at 2,100 feet per second and carrying a muzzle energy of more than 5,800 foot pounds. 200 yards downrange, the bullet is still flying faster than 1,600 feet per second and delivering more than 3,200 foot pounds of energy. Today, the .500 Nitro Express is sold with Soft Point bullets, Triple Shock bullets and many other popular configurations.

Some hunters declare the .500 Nitro Express has too much power and over-penetrates all but the largest elephants, but other hunters tell stories of using the cartridge on successful hunts for Cape buffalo and rhinoceros. The .500 Nitro Express cartridge, in any case, is extremely effective and capable at short ranges. This cartridge does have a definite downside in that the rifle must be very heavy to keep recoil at almost manageable levels. In a rifle weighing 10 pounds, the .500 Nitro Express still generates recoil energy of about 85 foot pounds. That is nearly double the recoil energy of an eight-pound 12 gauge shotgun.

American hunters will not find many applications for the .500 Nitro Express beyond stopping a rogue elephant that has escaped from the local zoo or stopping a semi-truck that's trying to run you over. However, the idea of owning a cartridge that shoots nearly an ounce of lead with two tons of force is a compelling thought.