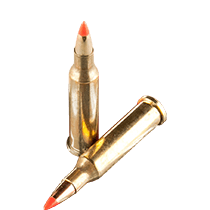 Live Inventory
Based on the .22 Hornet cartridge case, the .17 Hornet is a super-performer and a stellar choice for taking varmints up to 300 yards. It's known for its economical price, low recoil and stellar trajectory. Learn More

Made by P.O. Ackley in the early 1950s, the .17 Hornet is a .17 caliber centerfire rifle cartridge originally known as the “wildcat cartridge” (born from being a non-factory round). Ackley necked down the .22 Hornet and fire-formed the resized cases, which resulted in a small, quiet cartridge with high-velocity capabilities – an ideal round for varmint hunting.

More than 60 years later, the .17 Hornady Hornet is one of the most well known cartridges in this caliber, but it is not built to the exact specifications of the original wildcat. A shorter body with less taper, shorter case length and a longer shoulder of 25 degrees are a few of the dimensional specifications that do not match those of Ackley’s original design.

Prior to the existence of the 17 Hornet, there were no .17 caliber rounds to be found on the market. They could be found for BB guns, but that was it. For the most part, no one wanted a round that small. Ackley was known for constantly tinkering with any cartridge he could get his hands on. This was one of the first Hornet wildcats, and it took many years before it was adopted by mainstream ammunition manufacturers.

Part of this is because the technology had to catch up with the design. The powder and bullets the round needs for maximum performance simply didn’t exist until after Ackley initially designed the round.

P.O. Ackley: The Godfather of Wildcatting

Wildcatting probably goes back to the days when we first stopped using the ball-and-powder method of firing a weapon. But Parker Otto Ackley did it with a vigor that no one possessed before – and few have since. There’s an entire family of wildcatted rounds designed by Ackley, known as the “Ackley Improved” family of rounds.

The Ackley Improved family has a common ethos behind them: They’re supposed to be easy for the average wildcatting enthusiast to make himself, simply by rechambering his existing firearms. His emphasis was on a higher case capacity, which he got through a decreased taper and an increased shoulder angle. It wasn’t just factory rounds Ackley would work on – he also went after improving popular wildcatted rounds.

In 1936, Ackley started gunsmithing full time in Oregon. When the war came, Ackley had to close up shop for the duration. This time, he opened shop in Trinidad, Colorado, where he quickly became one of the biggest custom gunmakers in the United States. Additionally, Ackley was a staff writer for both Guns & Ammo and the Shooting Times, as well as an instructor at Trinidad State Junior College between 1946 and 1951, where he helped to establish their famous gunsmithing program. This is where he did much of the experimentation that earned him the sobriquets “America’s Gunsmith” and “Godfather of American Ballisticians.”

All told, Ackley is the father of over 30 wildcat cartridges. The 17 Hornet isn’t the only one to be made into a factory standard round recognized by SAAMI – the 280 Ackley Improved was manufactured by Nosler, and is perhaps the most famous of all his creations. He wrote six books throughout his life (only five of which were published and only two of which are known by the general gun enthusiast) and an almost uncountable number of articles for the top firearms magazines in the country. In fact, writing for multiple firearms publications is something that very few people did in those days. Generally, if you wrote for one, others wouldn’t hire you.

This makes him arguably the most influential gunsmith and barrel maker of the last century. If you’re a wildcatter or hand-reloader and you’ve thought of it, there’s a good chance that Ackley thought of it and tested it extensively first.

His research was not limited to wildcat cartridges alone. He tested many firearms until they broke for the sake of improving weapons as well as ammunition. Some of his cartridges were merely experimental and not meant for actual use, such as the .22 Eargesplitten Loudenboomer, which he developed only for the purpose of making a round that traveled faster than 5,000 feet per second. Army Ordnance repeated many of Ackley’s experiments and confirmed his results.

Not All Ackley Rounds Are “Ackley Improved”

The term “Ackley Improved” continues to be used for rounds never actually developed by Ackley himself. Rather, they conform to Ackley’s criteria of what an “improved” round is. His definition of an “improved round” was that the original round could still be fired out of the chamber. The cartridge casing could be necked up or down, but could not be stretched. This is achieved by a slightly shorter chamber, resulting in no headspace once the round enters the chamber. The aim of Ackley Improved is always to safely maximize the power a round can deliver without subjecting the firearm to additional stress.

One of the most fascinating facts about Ackley and his experiments is that his weapons were used in the early space program. This was so NASA could see the effects of high-velocity impact for the purpose of keeping astronauts safe. NASA was able to do this thanks to his experiments with hypervelocity rounds. It was Ackley who first found out that, above certain velocities, there are effects which do not conform to what one would expect from an impact at lower velocities.

So why do people use the 17 Hornady Hornet? Two reasons: First and foremost, it’s a varmint round offering a serious amount of power. But that power comes with an almost imperceptible amount of recoil, offering the varmint hunter the best of both worlds. This high-velocity round is also quiet, which makes it an ideal round for varmint hunters. It used to be difficult to get the parts to clean a 17 Hornady, let alone hand-reload your rounds. Now, however, there’s a thriving market for reloading parts and components for the 17 Hornet Hornady.

The round produced by Hornady is not the exact same round that Ackley invented many decades ago. Hornady’s standard round today features a shorter, rounder body with a less significant taper. This dimension difference causes some loss of accuracy when the round is fired from a standard 17 Hornady chambered weapon. It also has a thicker rim than the rounds produced by Ackley.

Those who wish to use the .17 Hornady Hornet in a .17 Ackley Hornet chamber will find the bullet jumps and may lose some accuracy. This can be fixed and can meet the SAAMI (Sports Arms and Ammunition Manufacturers’ Institute) standards by having your barrels set back one turn and rechambered to the new .17 Hornady Hornet.

For decades, .17 Hornet ammo has been known for its accuracy and reliability, as well as being a stellar round for varmint hunting. Even Ackley himself believed the .17 Hornet was one of the most balanced .17 cartridges of his time, and this is probably still true to this day.