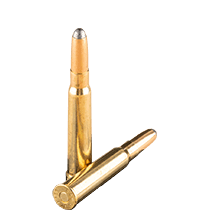 Live Inventory
A rimmed version of the 8mm Mauser, the 8x57 JR is seen in drilling-type combination rifles. It remains a highly valued cartridge among hunters, as its performance is of the same high quality as its rimless counterpart. Learn More

The 8x57 JR, based on the 8x57 J cartridge, is the same as the original 8mm Mauser cartridge except for having a rimmed case. This cartridge is most often found as the third projectile in break-action drilling rifles, topped with two other barrels for 12 or 16 gauge shotshells. The 8mm Mauser JR variant has been produced since the early 1900s, and is becoming less and less common every day – especially for those who shoot outside of Europe. Very few manufacturers continue to produce firearms chambered for this cartridge, with Blaser and Anschuetz being two of them.

The JS and JRS are the more commonly found cartridges of the 8mm Mauser family, and their names have an interesting story. The letter J is actually a case of mistaken identity. The letter I had been stamped on the rifle barrels in a Gothic script, which denoted Infanterie, meaning "infantry" in German. The S stands for another German word, Spitzgeschoss, which means "pointed bullet" in English. The German military adopted the S version in 1905, and this bullet is not the same as the original 8mm Mauser cartridge. The S bullet has a larger diameter of 0.323 inches, while the bullet in the J and JR cartridges has a diameter of 0.318 inches.

Bullets for the 8x57 JR are most likely configured as full metal jackets or soft points and weigh 196 grains. The round does not have the best ballistics in its class, yet the numbers for the 8x57 JR are respectable for a medium bore cartridge of its age. The German military M/88 cartridge, which they adopted in 1888, fires a 225 grain bullet out of the muzzle at 2,100 feet per second, and generates a muzzle energy of 2,200 foot pounds. Modern ammunition in this cartridge generates a muzzle velocity beyond 2,300 feet per second, and a muzzle energy of 2,350 foot pounds. These numbers make the 8x57 JR more than adequate for deer-sized game.

The 8x57 JR is an uncommon cartridge, but it offers great performance at short to mid range on game of medium size. Those who go hunting with this cartridge will not be disappointed.