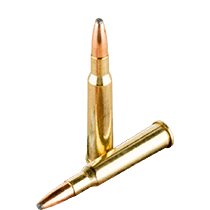 Live Inventory
A variant of the 7mm Mauser, this cartridge has a rimmed case that allows it to be used in Drilling type rifles. The 7x57mmR has been used to hunt dangerous African game and is also favored by European hunters for all sizes of game hunting. Learn More

The 7x57R, a rimmed version of the 7x57mm, was introduced on the heels of the 7x57mm Mauser cartridge. The rim allowed the cartridge to be fired from the popular break action rifles used by hunters in the early 1900s. Mauser and the Spanish military had done extensive testing to develop and field the cartridge in the Model 1893 bolt action rifle. This made the 7x57R easy to market to hunters, since the cartridge was already established as accurate and effective.

The 7x57R was not loaded to the same pressures as its predecessor, yet the cartridge was highly successful in the hunting world. Bullet trajectory is mostly flat, which makes it a good choice for hunting game on the plains. Hunters also favored the 7x57R for its knock-down power, which resulted from the moderately heavy bullet with high sectional density. The 7x57R possesses one final performance factor – superior penetration as a result of the long bullet shape and fast twist rate. Found all in one cartridge, these characteristics make it effective for hunting large game.

Ballistic values for the 7x57R are excellent, with bullets weighing between 120 grains and 175 grains. The most common bullet configurations are Soft Point and FMJ, and muzzle velocities range between 2,200 and 2,900 feet per second. The Norma company produces the most ammunition in this cartridge, as none of the other major manufacturers produce this caliber. Norma makes their own bullets for the 7x57R, but also uses bullets made by Hornady and Nosler.

Hunters have used the 7x75R to take animals as diverse as the mighty elephant and the roe deer. 7x57R ammo is held in high regard because of its power and versatility, allowing it to serve North American hunters well in their pursuit of any medium- to large-sized game.